Nathan Graham
Vladimir Guerrero, Jr.: My favorite moment on Sunday came from Vladimir Guerrero, who tweeted a picture from his playing days of him and his son both in Montreal Expos jerseys: Sr. and Jr. Hours later, Vlad Jr. delivered my favorite moment in the Futures Game by sending a first pitch, out of the zone fastball from Jon Duplantier straight up the middle for a single in the seventh inning. That one swing reminded me of the aggressive nature and plus hit tool that made Dad a nine-time All Star during his 16-year career. It’s probable that none of the Futures Game participants will ever match the 449 home runs and career 59.3 WAR that Vlad compiled but Vladito is showing that he has developed power and hand-eye coordination that might one day rival his dad’s.

Wilson Karaman
Eloy Jimenez: It was a small moment on a whiff of all things, but Jimenez faced Brent Honeywell in his first plate appearance and took a seat on a nasty in-zone 1-2 slider. What caught my eye wasn't the result, but the attempt at an in-swing adjustment. He was beaten by the pitch—it looked like he was expecting away—but he showed a smooth, quick transition into a shorter, dragging stroke in an attempt to fight the pitch off, foul it back, and live on to see another pitch. It's an encouraging sign for a hitter so precocious, and especially one so powerful and leveraged in his "normal" swing, to show signs of on-the-fly mechanical malleability. The effort jives with his wholly reasonable strikeout numbers as a 20-year-old in Double A, and it inspires my confidence in his hit tool developing into something good.

Mike Soroka: I was as impressed by Soroka as any arm in the game, in part because I never have cause to get to see Braves' pitching prospects, and in other part because he's a really impressive young pitcher. The arm action's a little wonky, but I'm a sucker for guys who generate outsized movement with slingier action and can flash command out of a lower slot, so he's right up my alley. He really got me with his adversity response after yielding a ringing RBI double to Kyle Tucker, though. His sequencing to the next hitter, Brian Anderson, looked like this:

1: 94 glove-side on the black
2: Right-on-right change-up with above-average tumble, located perfectly below the zone off same line and plane as the previous fastball away (ball 1)
3. Moving two-seam with nasty life and finish on the inside corner for called strike 2 at 94
4. Hard slider off outside corner with late movement at 89 that was fouled off the end of the bat
5. Another two-seam with plus run and sink running down and in off the inside corner to draw out a swinging strike three

Five pitches, excellent sequencing, perfect execution. There just aren't many 19-year-olds running around in Double A right now, and there definitely aren't many of 'em succeeding with both an advanced feel for craft and the maturity to respond with that level of controlled, precise execution to a tough spot on a big stage.

Erich Rothmann
Michael Kopech vs. Yoan Moncada: These two former Red Sox prospects came to the White Sox in the Chris Sale trade, so as a Boston native, I was especially intrigued by this matchup. Kopech's stock has soared since I attended his rehab start in Lowell last season. And he definitely did not disappoint against our top rated prospect. His fastballs were: 100, 100, 100, 101, 99, 100 and 101 mph (with late life). He pairs his plus-plus fastball with a plus slider, which as Sunday's one inning appearance shows, gives him a floor of a dominant high-leverage reliever. If his command and changeup improve a bit, he has a great chance of becoming one of the best pitchers in baseball. While striking out on a 101 mph pitch should not raise any red flags, strikeouts have been a problem for Moncada this year so far (93 in 284 at-bats). Nonetheless, he is a potential five-tool player. I love watching Sale pitch for the Red Sox but doubt that the White Sox have any regrets about the trade. A true win-win.

Keith Rader
Brent Honeywell: I'm going to take the low-hanging fruit in Brent Honeywell, but I'm not sure exactly where to start – the accent, the fastball, the pronunciation of his last name (who is Brent Honeywall?), the screwball, THE ACCENT, or the change? Honeywell made a phenomenal hitter in Alex Verdugo look silly in the top of the first. I've not seen Verdugo look that bad in an at-bat this year, but he was thrown a phenomenal sequence of pitches. To his credit, Verdugo took a great fastball just off the plate on 0-2 and managed to foul off another good fastball on 1-2. On 1-2 Honeywell let fly his lone-screwball of the afternoon, and Verdugo buckled and watched it fall right into the middle of the strike zone. Each at-bat with Honeywell on the mound was fun to watch, but the Verdugo sequence really stuck out as a thing of beauty.

The fastball is nice, the screwball is fun, but the pitch that impressed me most was the change. It breaks so much that the broadcast team had a difficult time deciding if it was a change or a screwball. Each one came in between 80 and 84 MPH and absolutely falls off the table with arm side fade and 10-4 movement. As he told Heidi Watney in a dugout interview he threw so many because "those guys are goosed up ready to hit a baseball". After getting a couple smiles from using it myself, I recommend throwing 'goosed up' into your lexicon.

Honeywell's fastball/change combination is one that will translate well to the next level, and hopefully he gets to test that sooner rather than later if the Rays keep winning. The delivery is smooth and repeatable; however, he did display a more pronounced head whack than I've seen from him in the past, but maybe he was a bit 'goosed up' himself.

Javier Barragan
Estevan Florial: Yankees OF Estevan Florial is a toolshed. Florial has a plus arm, with carry and strength behind it—take this grainy video as evidence. He is aggressive on the base paths, advancing to second on the nice catch by Rockies Ryan McMahon and scoring on the following play on Astros Yordan Alvarez’s bullet up the middle forcing an error on Brewers’ Corey Ray. The hit tool is shaky, as strikeouts will always plague him because of his fences-or-nothing approach. But, you can accept this approach as the power plays to all fields—oppo, center and pull. It is his glove that I want to highlight, which also plays above average because of his speed and athleticism.

Florial can play all three outfield positions. He has the speed and glove to cover center, and the arm and power to play in right. In this Futures game, he played right, and on a routine F7 play, I want to capture his style of play.

It was the 7th inning, and Phillies Scott Kingery hit a can of corn to right-center. The ball looked to land between Florial and Brewers Mauricio Dubon. As we know, when the center fielder is involved in a play in the outfield, it is his call to make, and when he does make a call, everyone else submits. Dubon made a call for the ball, and Dubon was going to catch said ball. If I have failed to make it clear, it was Dubon’s ball; the routine flyball was going to be logged as an F-eight.

Then Florial had a click-whirr moment.

A habit (not a bad one) that regularly appeared last season on balls destined to either the left or right fielder while he was playing center, Florial would run very closely behind the fielder, occasionally barking for the ball. It is not that Florial does not know how to communicate, it is that he wants to catch every ball. It is as almost to show: “I could have caught that.”

This habit has carried into this game, and presumably this season. Florial wanted the ball, disregarded what Dubon said, and snatched the ball for his putout.

The routine flyball is now, and forever will be, an F-seven.

Craig Goldstein
Brendan Rodgers: Rodgers gets most of his acclaim for what he can do with the bat—and he can do a lot with it, including a hit in this game—but he stood out to me on Sunday by flashing some leather. With Michael Kopech on the mound, Josh Naylor took a 100 mph offering and ripped it up the middle on the second base side of the bag. 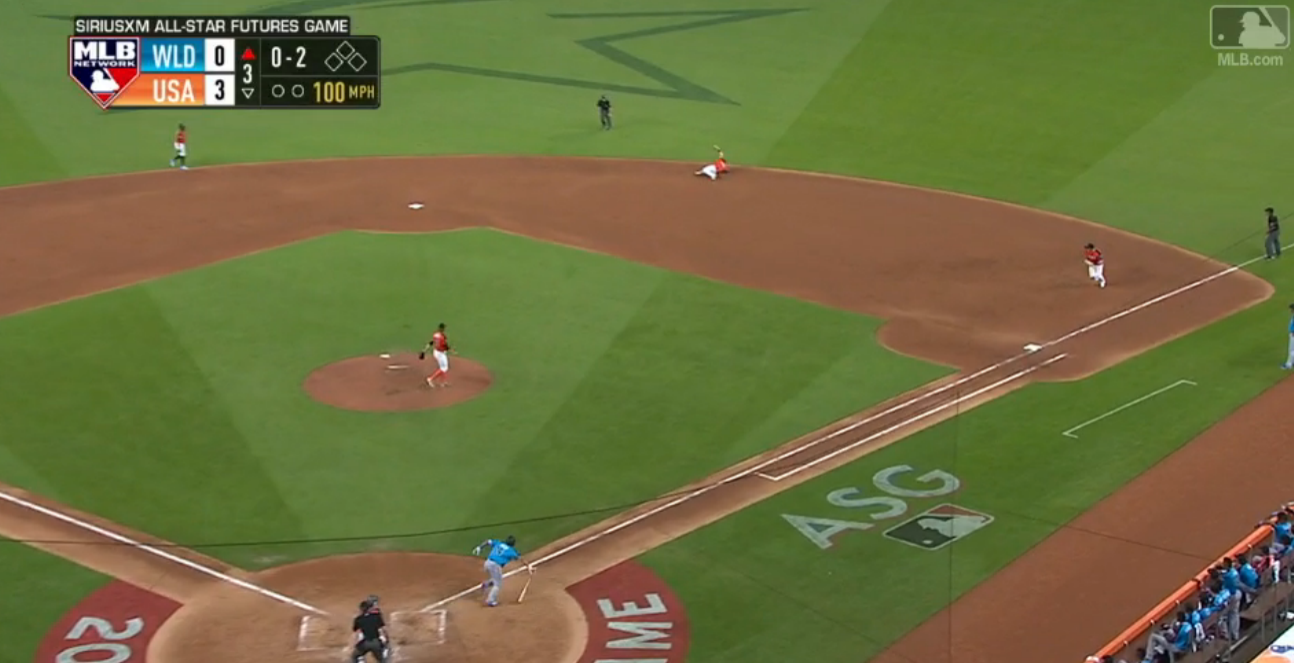 It wasn’t overly far from Rodgers’ starting position, but given how hard Naylor hit it—and the fact he was playing out of position to begin with—his ability to snare the ball even though it was already behind him, pop up, and throw out the admittedly slow moving Naylor, was extremely impressive.

Rodgers’ success is always going to hinge on how well he hits. If you saw our Midseason Top 50, you know we think he will hit, and hit a lot. That said, there were early questions about whether he’d stick at shortstop, and while one play at second base won’t put those to rest, he showed he has the tools to stick on the infield dirt when it’s all said and done.