Baseball may be a game built on failure, as the tired saying goes, but it at least has the decency to be pretty unequivocal in those declarations of failure. The parameters are usually defined clearly here—you struck out with the bases loaded, or you blew the save, or you walked away altogether because you are a 27-year-old who just can’t figure out Double-A. The game’s structure doesn’t leave you significant space to get stranded in any guesswork about the substance of these outcomes. There is always a how and a why, sure, but baseball tends to be respectable enough to give an honest what. There are some fairly firm factual and statistical parameters for failure, which may not give you any comfort, but will give you at the very least a sense of where you are.

A sense of where you are, however, does not equal a command to stay where you are. It does not even equal a command to recognize where you are. It’ll often just let you keep trying until you cave. The parameters of baseball failure, for instance, would seem to be pretty unambiguous in declaring the failure of a 32-year-old in indy ball, two years removed from being cut from Triple-A and three years removed from his last major-league appearance. But being squarely within those parameters does not require playing by their rules or adjusting course accordingly or even acknowledging them at all, and so maybe then in a few years, he’s a 34-year-old in Double-A. By those standardized criteria for baseball failure, there is maybe no meaningful difference here. But maybe there is, and so maybe then he’s a 35-year-old in the major leagues for the first time in six years, coming out of the bullpen for one of the worst teams in baseball. And then, finally, he is a 36-year-old making his first career major-league start.

This is what the anonymously-named Chris Smith did. He made his first start on Saturday for Oakland, a full 13 years after he was drafted by Boston, with nearly the entirety of the time in between spent slogging through the minor and independent leagues. He was neither terrible nor wonderful; validated neither with an implosion that could have proven some sort of pointlessness nor with a display of glory that could have proven some sort of point. He lasted six innings, struck out four, walked one, gave up three runs—a no decision, fittingly, but at least one where his team won. Failure, it turns out, is just a matter of what you can stand.

Eight Home Run Derby Moments That Did Not Happen 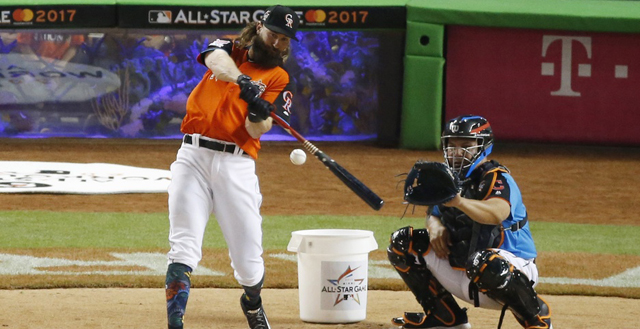 My mom has a problem with stuff. I guess you could call it hoarding, although it’s not exactly to the “stacks of newspapers tumbling down Indiana-Jones style as you attempt to navigate through the house” level. It’s more, “no I can’t possibly give away this [oscillating fan, sandwich maker, rolling suitcase], it’s still perfectly good!” She doesn’t need the thing; ridding herself of the thing will, in fact, result in her having more of something, more money or more space or more oxygen, at least. But this addition by subtraction doesn’t compute for her. As a child raised by parents who lived through the Depression–when my grandfather died we emptied their basement of mason jar upon mason jar of screws, bottlecaps, bits of string–all my mother can see is the loss.

The time I identify with this part of my mother the most is always the trade deadline. I know my favorite team does not need all of its current pieces. Rationally, I know there are other things they need more, even if that thing is not a corporeal thing, but the abstraction of money or roster space or a Low-A pitching prospect. But the idea of sending off any pieces, even pieces I dislike personally, floods me with a low-level anxiety I see mirrored in my mother’s face when I gently suggest she perhaps does not need three waffle irons (regular, Belgian, and heart-shaped). The refrain is always the same: “But what if I need it?”

And I suppose that’s what’s hard about the trade deadline: it’s a step into the unknown, your foot chasing vainly after that top step in the dark. Depending on your life experience, you look down the line and see either possibility, or deprivation and regret. As a Mariners fan, I’m much more acquainted with the latter. Safer just to hope for a neutral WAR out of this mason jar of twist-ties. It doesn’t matter if the team has ten center fielders; what if I need the heart-shaped one? There’s a comfort in ownership, even if you are a proprietor of mostly junk, but also a degree of identity tied to owning these things. My attempts to get my mom to divest herself of things threatens her identity as a person who owns four different curling irons; the trade deadline challenges my understanding of what it means to be a fan of this team. So maybe what I’ll do is ease up on my mom for a while, let things take their natural course. Last I checked, the wire on one of those curling irons was getting kind of frayed, anyway.