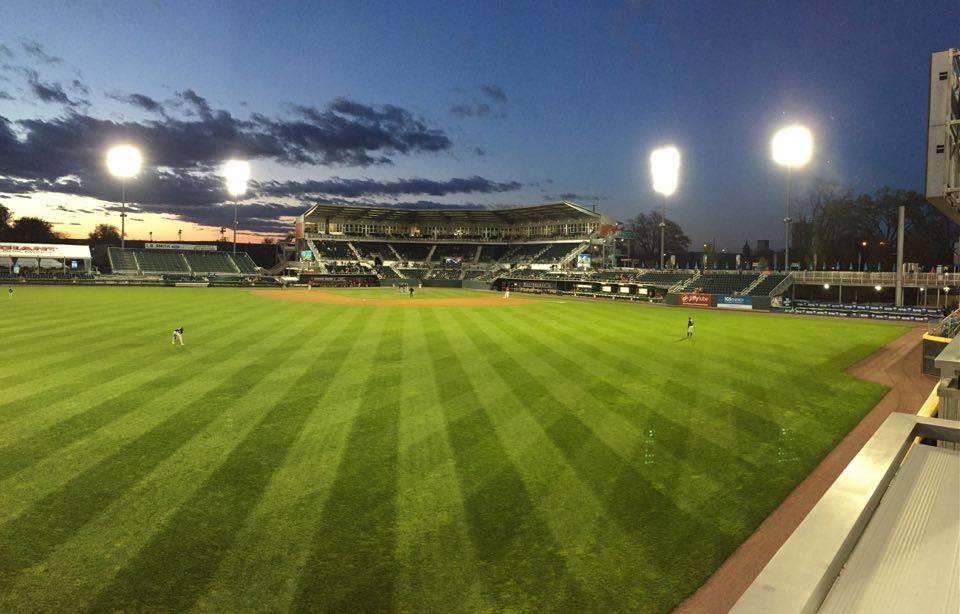 On any given summer evening, millions of mayflies cloud the lights of ballfields in proximity to fresh water. Creekside Little League and slow-pitch alike know that living haze. For the hatchlings that emerge in the lee of the Susquehanna River’s City Island, there is only one place to go: FNB Field, home of the Harrisburg Senators.

A modest Double-A stadium, FNB Field is dwarfed by the scale and execution of its major league counterparts, but for the individual Pale Evening Dun or Golden Drake mayfly setting out for its ephemeral adulthood, it’s a universe.

To a mayfly, a regular bobblehead is a nodding behemoth. At FNB Field, the Life Size Bobblehead Hall of Fame looms past understanding, but the jutting crag of wooden Matt Stairs’ helmet is a refuge, safe from brushing hands and crushing feet. The painted shadow of Bryce Harper’s iconic eyeblack offers respite from the fatal allure of 150,000 lumens and electric heat.

Most mayfly species come to adulthood with no functioning digestive system, their guts all airy hollow. Some may sip the water they’re hatched from, a small nourishment in a life of procreative frenzy. Ballfield mayflies may find something sweeter: here a cola drip, here a cerulean wash of melted Slush Puppy. Their six legs and forked tails rest on salty sunflower seed chaff, split seed-casings the same size as their translucent wings. By morning, mayfly bodies will carpet the warning track and the bleachers, softened shells themselves, but for now, there’s baseball. The Harrisburg Senators are going to play two beneath the lights.

For the players, fourteen innings tonight are not all of life. There is a day game tomorrow. There is a future in Triple-A Syracuse or in Washington or at least in Major League Baseball. Or there is a future somewhere else entirely—in a realty office, in a classroom, in uncertainty. There were years before: some spent theirs in a steady upstream swim from signing to Double-A, or others followed other paths. Senators outfielder Darian Sandford was drafted in 2010 by the Kansas City Royals, the 1409th player to be selected that year. Sandford played two seasons in the Royals’ system, and then spent five and a half seasons playing on ten different independent teams before the Nationals signed and assigned him to Harrisburg in mid-June.

One temporary denizen rests between the blue light of a scout’s phone and a radar gun’s red blink. It’s hard to say whether the mayfly even sees Darian Sandford’s pinch-hit single in the fifth inning of the first game or Sandford’s single in the third inning of the second, whether the ball’s white against turf green means anything to an insect’s compound eyes. As the darkness fills in around the stadium, the floodlights teem with the swarm’s churning hum. The mayfly’s hours shorten, and when the game ends, the field will return to its unstirring darkness, but there are still some innings to go. Beside the mayfly, the scouts make their notes, careful hieroglyphs for the future. There is time enough for all things.

What’s in a Name

On June 28, it was announced that Mariners pitcher Drew Smyly would undergo season ending Tommy John surgery. The news was met with regret, trepidation for Smyly’s future, and just some of the most awful puns you’ve ever heard. Drew Frwnly! He’s not so Smyly! It went on.

Aptronyms are names that correspond closely to the profession or personal attributes of their owners. For normal people that’s fine; it’s at most a joke among co-workers at the weather station if the chief meteorologist's last name is “Storm.” But no one writes daily headlines about meteorologists. Baseball is littered with pitchers whose names raise the stakes of the game; one bad pitch, and their name is a weapon to be used against them. Smyly is the freshest example, but who are the others? I combed the 40-man rosters of all 30 teams for the pitchers whose names presented the most dangerous potential aptronyms, then ranked them to find game’s worst. I took into account:

The highest (worst) possible score was 30.

A novice would go after Homer Bailey’s home run rate. A master would note that a different Homer wrote of a different ten-year war of which there were many heroes but few survivors.

Marty DeMerritt was a right-handed pitcher drafted by the Cardinals in 1971. He pitched for six seasons, peaking in Double A. Wikipedia says that after his minor league career ended, he worked construction and was a bounty hunter (!) before becoming a pitching coach. He isn’t related to Ryan Merritt as far as I can tell, but I hope if Ryan ever suffers a “De-Merritts” pun after a rough outing, he thinks of Marty, and realizes he could always track down criminals. It’s a living.

I think if my son told me he wanted to be a pitcher and “More-in” was a play on our name, I might encourage him to be a slugger or a shortstop or an ophthalmologist.

If I were a stadium DJ, and Fernando Abad were in town, I would play Chris Isaak’s “Baby Did a Bad, Bad Thing” anytime he gave up a run. I would then be fired and be embarrassed to tell my mother why.

Rookie Davis’ full name is William Theron Davis. He has no one to blame by himself.

Once a week, someone calls an off-Strip casino in Vegas, wishing to place a bet on which will remain active longer: the “This is Fine Dog” meme, or Casey Fien. No one ever answers the phone.

In this time of partisan rancor, there is something noble in a man issuing an instruction to his opponents so deleterious to his own cause.

Both Koda and Glover carry with them great potential, somewhat undone by how unlikely it is that headline writers will have need of either.

I wonder if his last name looms larger for Taijuan whenever he’s in a 3-2 or a 3-0 count.

When Jonathan was a young boy, he probably dreamed of being a starting pitcher. The concept of “holds” didn’t matter much. Then he moved to the bullpen. I bet he worries about different things now.

The worst feeling in the world for a fan is knowing that your reliever is going to give up runs. Thankfully, with Mychal, that’s hardly a Givens.

You need to be logged in to comment. Login or Subscribe
reznick
Back in the day, as a single-digit aged Yankees fan, I remember when a newspaper wrote "Utility infielder Phil Linz fills in"
Reply to reznick
megrowler
After writing, I was led to rediscover Ben Carsley's great piece on pitcher names, which you should all check out here: http://www.baseballprospectus.com/article.php?articleid=30389
Reply to megrowler
sam19041
Holly, that was spellbinding. Just outstanding writing. You have a gift. It was contemplative and elegant, but not treacly. Thank you!
Reply to sam19041
geatland
Thanks so much!
Reply to geatland