Some Questions About The Jose Altuve 5-Hour Energy Commercial

• How come Altuve has to wear brandless uniforms but the Major League Baseball logo is fair game?

• Is the subplot of this commercial that the Astros went 30 years into the past and accidentally hit on their mother?

• When does StatCast gives us “major energy upgrade” as a measurable metric?

• 27 cuts on Altuve fielding first base and this was your best take? 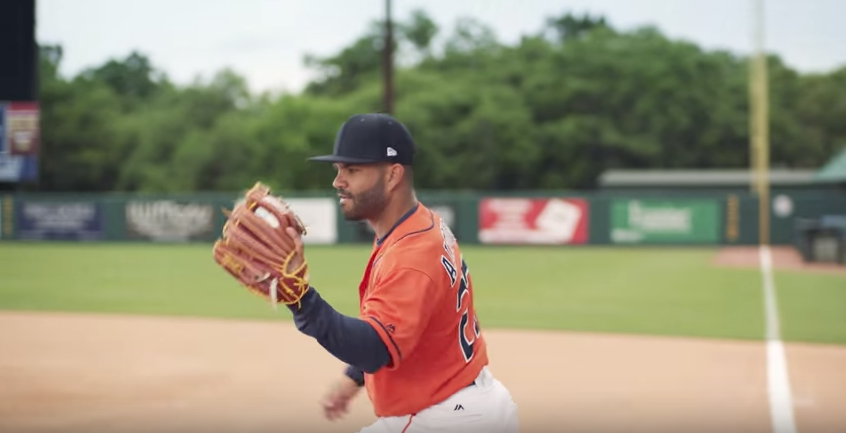 • Then again, I can’t name the Astros first baseman without looking it up. Maybe it really is Altuve?

• If he is “everywhere” then how come he has fielded all but four innings of his career at second base?

• And what’s with the misandrous trope of a woman explaining who baseball players are to her male friend, who can only think about his large and ineffective energy drink?

• Are we going to spend 30 seconds on the “small player endorses small drink” and completely gloss over the fact that this is literally a pie-flavored energy drink? 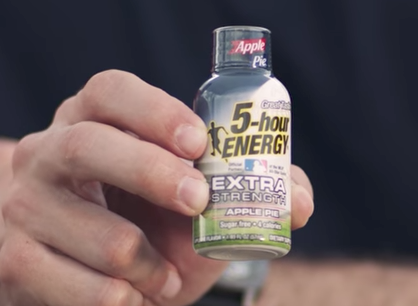 • What is Mark Appel up to these days?

• What is Felix Pie up to these days?

• [needs a good joke for the “five hour” portion] uhh what is Josh Beckett up to these days?

• Hold up a minute. Computer, enhance:

• When will the FDA come out with its report that Jose Altuve is the proper size?

• Are you saying that after six doses of this product, I do not in fact suffer from heart dropsy?

• If 5-Hour Energy does not cure anything, then how do I best treat “baseball fever?” (as An Astros Fan, this was not a problem three years ago.) 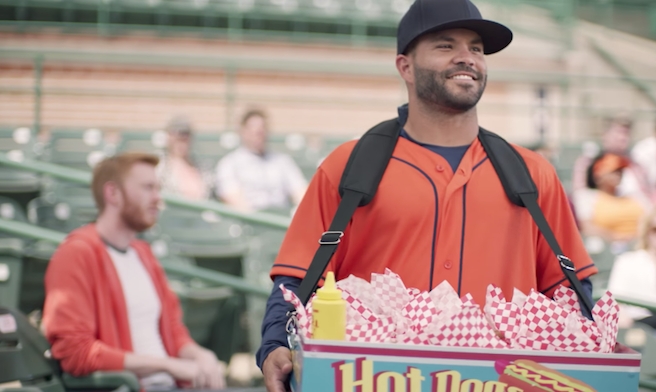 • Who got promoted to head of marketing for only putting mustard in the hot dog cart?

• When does the ad buy begin for “Warm Glass Of Milk Before Bedtime-Flavored 5-Hour Energy” starring Carlos Beltran?

• Would you agree that this is really just a commercial for hot dogs, since that’s all I really want right now?

• What’s Randall Simon up to these days?

A Man Struggles with Bagels

Jered Weaver, a three-time All-Star and Cy Young runner-up will likely be remembered, at least in the next few years, as the guy who Jeff Sullivan made great jokes about. But what I want to express to you today is that Jered Weaver should be remembered for this dumb, idiotic, enraging bagel tweet above. My case: 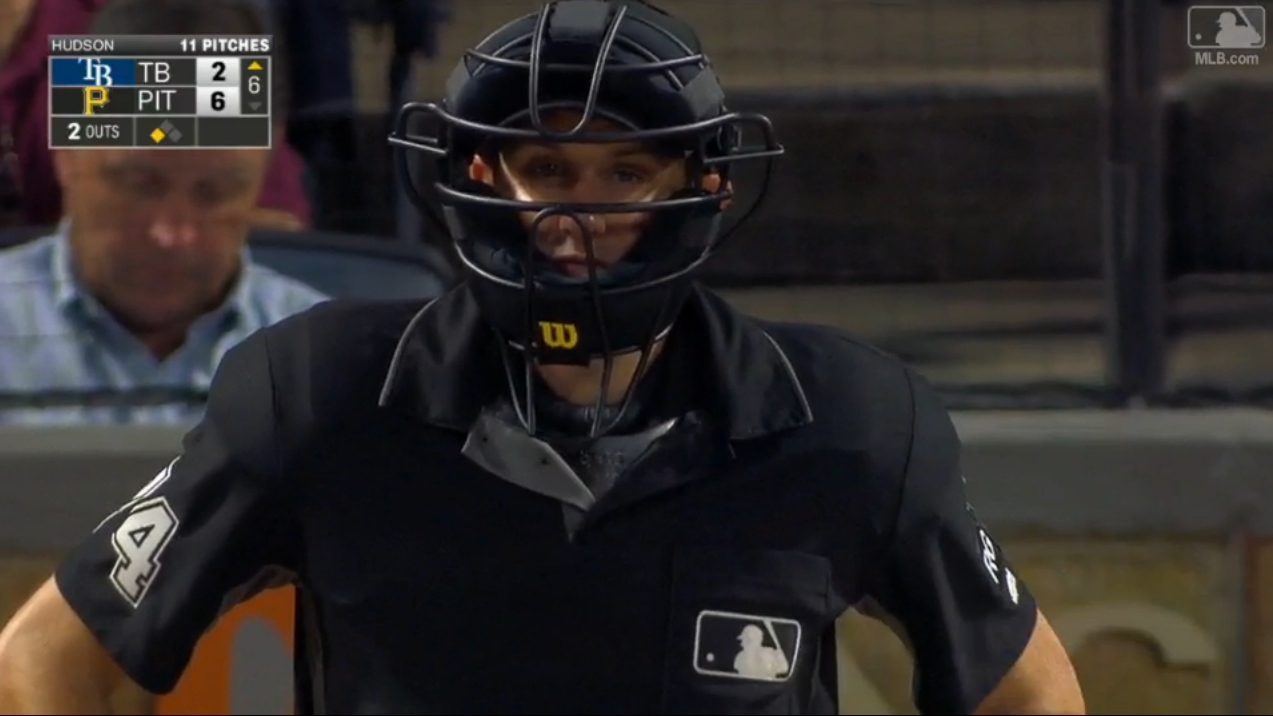 As John Tumpane was walking to work on Wednesday afternoon, he passed by a woman climbing onto the ledge of Roberto Clemente Bridge. Instead of continuing on his way, he approached the woman, striking up a conversation, trying to casually talk her to safety. When that failed, Tumpane grabbed onto her with both arms, holding her (with the aid of another man) until police help arrived. Shaken by the encounter, Tumpane retreated to his hotel room to clear his thoughts before continuing to PNC, where he umpired a game between the Pirates and the Rays.

In a game that seems so mechanical, with rules dictating every circumstance regardless of obscurity, umpires and their supposed imprecision stand out to fans, who frequently blame them for their team’s losses. We know very little about umpires as individuals, which makes it easier to deride them for their performance. Rather than upholders of the rules, umpires are now viewed as tyrants or showoffs, needlessly inserting themselves into games and influencing outcomes.

There have been many discussions, sarcastic or otherwise, about replacing umpires with robot umps, under the perceived notion that strike zones would be more consistent, and the game would be better wielding a mechanistic system of justice. Even if the robot umps deliver the same results, they are superior in their lack of sentience. Robot home plate umpires would presumably not engage in staredowns with unsatisfied pitchers or wait until a batter was halfway to first before calling a strike. Robot umpires would be less controversial, less egomaniacal.

But robot umpires would also be less enigmatic, killing the mystique of the position. We are supremely aware of umpires’ humanity as tied to their fallibility, but it is also obfuscated by the uniform and position, so they hover somewhere between fully-fleshed human beings and automaton. As such, they represent the deeply human nature of baseball. Their work is not so much in determining fair or foul, which is generally obvious and elicits little resistance from either team, but in operating in the far more fluid grey areas. They provide a juxtaposition to the players, who fail far more frequently than umpires but are largely remembered for their few successes. They stand as reminders of the way baseball became “the perfect game”–in incremental changes, through decades of trial and error and interplay among the athletes and fans.

Indeed, the subjectivity of the most crucial aspect of the game, the strike zone, denotes the significance of human umpires. Baseball is about building relationships, among teammates and between players and fans. The long season and daily grind introduce psychological and mental elements that far surpass physical prowess. It’s about the uniqueness of these relationships, exemplified in the way each individual player approaches the strike zone and assumes a dialogue with each individual umpire. Baseball is a game of quirks, from the stadiums to the pitchers’ windups to the existence of umpires who create rules as much as they follow them.

As word spread throughout PNC on Wednesday of Tumpane’s actions, he suddenly became human to the crowd, and a necessary human. Without his humanness, the woman on the bridge may have met a different fate. And without his humanness, the game might have also met a different fate. And so when Tumpane next steps behind the plate, the crowd will know that he is a good person with a flawed strike zone, and baseball is better for that.

You need to be logged in to comment. Login or Subscribe
TGT969
Don't mess with umpires! The woman he rescued feet were dangling in the
air 60' or about the Allegheny. Many a body has washed up down the Ohio
over the last 250 years.

He got a standing ovation from over 22000 at the ballyard before it began.
Speaking of heroes, Jamison Taillon went 6 1/3 shut out innings in the Bucs
4-0 over Tampa.
Reply to TGT969
jfranco77
Jered Weaver has earned just under $100mil according to B-Ref. Given that, it is entirely possible that a bagel hole really is the most difficult thing in his life.
Reply to jfranco77