Six days ago, Marcus Stroman took the mound against the Rangers and had his worst game of the season, allowing seven runs over four rough innings of work. Bouncing back from a brutal start like that isn’t easy, and it takes a certain personality to get over a nightmarish outing and deliver the exact opposite less than a week later. Luckily, Stroman certainly has that attitude, and then some. Carrying himself with a unique swagger perhaps unmatched by any other hurler in baseball, Stroman was a 5-foot-8 ball of electrifying energy against the Orioles, throwing 119 pitches over 7 2/3 innings and making every single one count.

A major criticism of Stroman in 2016 (when he carried a 4.37 ERA over 32 starts) was that while, yes, he had an expansive arsenal of six pitches, it didn’t make much of a difference when none of them were better than average. Stroman didn’t have the out-pitch he needed, nor did he have dependable weapons on which he could rely. So, on Wednesday, the Jays’ ace picked a couple pitches and stuck with them, with great success. 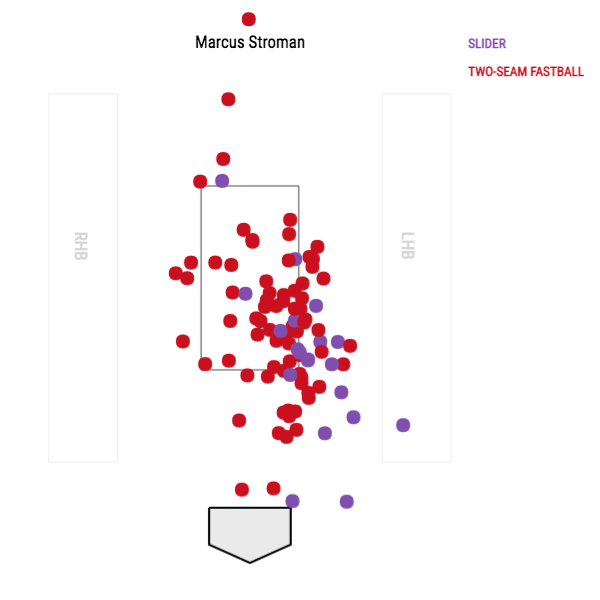 Stroman decided to play favorites with his two-seam fastball and slider, living down in the zone with the pairing and toying with batters all night. He notched an impressive 19 called strikes on the excellently located heater, which was thrown 63 percent of the time, though Stroman’s slider stole the show—he threw it 20 times on the evening, and of the 10 swings put on the pitch, just two connected. Those swings ended in a double play and a harmless single.

Every night, we’re given painful evidence that young relief pitchers are the most volatile players in baseball. Sometimes these young arms look unstoppable, mowing down batters left and right and making mere contact nearly impossible. Other times … not so much. These bouts of ineffectiveness and stretches of dominance can give way to one another in the same season, month, week, game, and, for Edwin Diaz on Wednesday, in the same inning.

Diaz entered the game with a one-run lead in the ninth, looking to seal the win. Unfortunately, he couldn’t do that. The initial blow came with the first batter that inning, when Tommy Joseph caught up to Diaz’s 98 mph heat and delivered a game-tying home run.

Then, with the lead gone, Diaz was his best self for a couple batters. Odubel Herrera flailed helplessly at a slider in the dirt for the first out of the inning, and Maikel Franco was similarly unsuccessful against another a similar pitch. Then, enter the struggling Diaz. Perhaps taxed after already throwing 21 pitches to the first three batters, the 23-year-old righty walked the next batter, Cameron Perkins, then balked Perkins over to second base. A couple pitches later, Andrew Knapp shot Diaz’s 33rd pitch of the inning into right field to drive in the go-ahead run and give the Phillies a win.

Watching players make their big-league debut never gets old, and Jae-Gyun Hwang had a particularly fun day against the Rockies. A former star in South Korea, Hwang has spent this season at Triple-A and was just days away from potentially opting out of his contract when the Giants gave him the call. He put the Giants on the board with an RBI ground out in the fourth inning, then gave the Giants the lead in the sixth inning by notching his first major-league hit—a big home run to left field.

The Cubs have had quite the past 24 hours, first stirring controversy by visiting the White House (for a second time) to commemorate last year’s World Series win, then seeing off-the-field distractions grow louder when backup catcher Miguel Montero was designated for assignment after calling out Jake Arrieta for his inability to control the run game. Things only grew worse during Wednesday’s game against the Nationals, beginning with eight runs off starter John Lackey and ending with franchise cornerstone Kris Bryant exiting the game after rolling his ankle on third base in the fifth inning.

While Bryant is unlikely to have his leg amputated and may not even hit the disabled list, it was a tough blow for a Chicago team which has experienced quite the World Series hangover and now sits at an even 39-39 record.

Conversely, the Nationals kept rolling with the help of Stephen Strasburg and his 13 strikeouts. Strasburg was nothing short of nasty, generating 11 whiffs on his changeup and another nine on his four-seam fastball (while also showing pinpoint command of his curveball). The righty allowed just four hits and a walk over seven innings of work, though he did cede three runs (two earned) thanks to a two-run dinger from Willson Contreras.

By any measure, it hasn’t been a great season for the Reds, though that assessment is probably the understatement of the year when it comes to Cincinnati's rotation. Their starting staff has easily been the worst in baseball, carrying a 6.25 ERA on the season that is more than half a run higher than the second-worst team (the Orioles). Still, when everything’s looking bleak, even the smallest of bright spots seems that much better, so Reds fans are probably a bit excited about Luis Castillo after a solid start on Wednesday against the Brewers.

Making the second outing of his big-league career, Castillo went 5 2/3 innings, allowing two runs on five hits, three walks, and nine strikeouts. He may not have been dominant, but the 24-year-old showed plenty of promise with a four-seam fastball that averaged 97.3 mph and an excellent changeup which netted nine whiffs on 20 pitches.

Although Castillo’s command wavered a bit, he displayed two plus pitches and also flashed a perfectly acceptable slider. The flamethrower may be a reliever long term, but the Reds can afford to give him an extended rotation look in a rebuilding year. He’ll be a name to keep an eye on, as there’s enough heat in that arm to be one of the few positives in Cincinnati’s rough season.

I might not be talking about Castillo, though, if it wasn’t for Scott Schebler. Castillo had found himself in a bit of a jam in the second inning, putting runners on first and third, when Stephen Vogt skied a fly ball to right field that was destined for the seats. Luckily for Castillo and the Reds, Schebler was able to make an excellent play that may have been the difference-maker in a slim 4-3 victory.

Remember when I said that thing about MLB debuts being fun? Hwang may have stolen the show with his first hit being a home run, but Yankees third baseman Miguel Andujar also had himself quite a night. After playing just seven Triple-A games before being shuttled to the Bronx, Andujar hit the ground running against the White Sox with a 3-for-4 night, doubling once and knocking in four runs total (he also walked once for good measure). Andujar may not exactly be Gleyber Torres, and he probably won’t stick with the Yankees for the majority of 2017, but the 22-year-old has some loud tools and could eventually be an everyday player.

Oh, and by the way, Aaron Judge did that home run thing again. This time, for an MLB-leading 27th dinger.

It’s always nice when a player perfectly encapsulates his whole scouting report in a single performance, as it saves us writers a lot of effort. It’s Joey Gallo going 1-4 with a home run and three strikeouts, Billy Hamilton getting an ugly infield hit and then stealing two bases, and Kyle Schwarber hitting a home run and then face-planting in the outfield an inning later. Or, like on Wednesday night, it’s Alex Meyer throwing six innings of shutout ball, giving up one hit, striking out four, and walking five. Okay, maybe it would be slightly more perfect if he struck out nine guys instead, but I think you get the gist.

No matter what, Meyer will be hard to square up thanks to his impressive arsenal—most notably a high-octane fastball and knockout curveball—but it’s also hard to square up a fastball when it’s a foot out of the strike zone, so "unhittable" doesn’t always mean what you think with Meyer. We can’t expect the lanky righty to spontaneously develop the requisite control to remain a starter, which leaves Meyer as a fascinating enigma whose stuff is sometimes enough to overcome an onslaught of balls and walks, but not always enough.

Despite pitching well, Meyer didn’t get the win due to some late-inning drama. Trayce Thompson homered in the eighth inning to bring the Angels’ lead to one run, and Yasmani Grandal followed that up with a big, game-tying shot in the ninth with his team down to their final out.

The Dodgers and reliever Pedro Baez found themselves in a jam a half-inning later, as the Halos had a man on second base and two outs in the inning. Luckily, Baez got exactly what he needed by striking out Cameron Maybin. Significantly more unluckily, though, it was a walk-off strikeout for the Angels. Confused? Maybe this clip will clear things up:

Corey Kluber’s one of the hottest pitchers in baseball right now, so his start against the Rangers at 12:10 pm ET will be must-watch television. An hour later, Michael Fulmer will look to continue his strong sophomore season versus the Royals, and an hour after that, Brad "Strikeout" Peacock will take the mound against the Athletics.

Later in the afternoon at 4:05 pm, Jon Lester and the Cubs will look to turn around what’s been a rough few days, though they face a tough opponent in the Nationals and Joe Ross. Another intriguing matchup will be Chris Archer throwing against Jameson Taillon at 7:05 pm, in what could be an entertaining pitcher’s duel.

Other top arms throwing on Thursday are David Price against the Twins at 7:10 pm and Clayton Kershaw against the Angels at 10:07 pm. If you’d like to see some offense, though, the Brewers could be in for a busy day as they take on Homer Bailey, who allowed eight runs over 1 2/3 innings in his season debut last week.