Back in 1975, Joe Torre played out his last season as a third baseman, Pedro Guerrero toiled in the Dodgers’ farm system, and a researcher named Ellen J. Langer published a study that would become a staple of the as-yet-unpopularized field of behavioral economics.

In the study, researchers allotted one group of participants lottery tickets with pre-assigned numbers. They gave another group blank tickets, asking them to fill in the numbers themselves. Then, they attempted to buy the tickets back. The result, since replicated and disseminated in more readable forms by the work of Daniel Kahneman, revealed an illogical human bias: The participants who wrote down their own numbers were more reluctant to sell back their tickets—exhibiting far greater confidence in their choice (despite the absence of any reason to feel that way) and far more motivation to see it through than those who had their numbers handed down.

The study’s immediate implication was the identification of a flawed logical process to which most of us fall prey. But in the longer game, the corporate world has found an outlet for the principle as a “change management” tactic. In action, this is the elevator pitch: Hey, instead of telling your employees about a restructuring and what they’re going to do now, go to them with a problem or a goal and have them participate in designing the solution or path forward.

While I won’t pretend to know whether such plans actually achieve better results than the prescriptive alternatives, it does seem reasonable that the employees who write their own tickets, so to speak, will go with the desired flow more willingly, and perhaps with higher morale.

We’re talking about a soft factor, the type that might have come up in 1971, when the Cardinals shuffled catcher Joe Torre to third base. Though it’s difficult to judge exactly how Torre received the news of his position switch, we know he committed himself to shedding weight, arriving 20 pounds lighter. We also know he posted the best season of his career and won the MVP that year, later quipping that he “must have been the only MVP in history who received more requests for a diet program than for an autograph.” 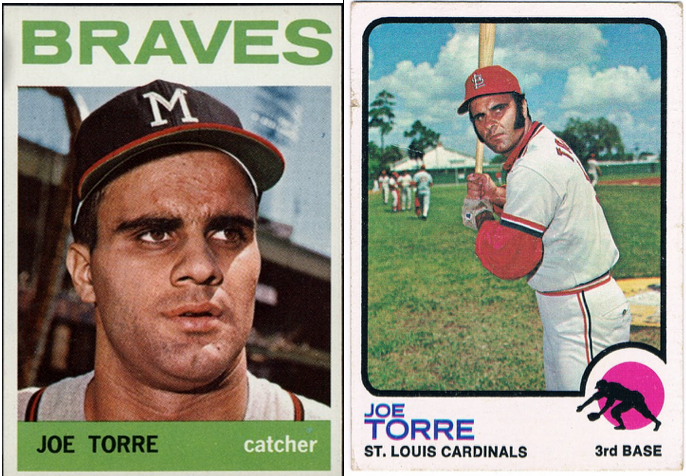 The potential shift across the infield looked like a pie in the sky of a slow news day initially. But we quickly learned that, no, it’s real, and Freeman appeared to be the driving force in the confusing attempt to cater to the newly acquired and first-base-anchored Matt Adams. So now we must confront the idea of a superstar offensive player making a mid-career move up the defensive spectrum, and reckon with how much it matters, if at all, that the whole thing seems to have sprung from Freeman’s own head.

In late May of 1983, a Sports Illustrated piece by Steve Wulf detailed the elaborately named concept of “coconut snatching”—a Branch Rickey phrase, perpetuated by the less fondly remembered Al Campanis, for switching players’ positions based on team needs. The Dodgers were doing a lot of it that year. The previous season had ended in disappointing fashion, and over that winter Ron Cey and Steve Garvey departed. With Mike Marshall taking over in right field, the enormously talented Pedro Guerrero was shifted from right field to his childhood position, third base, a season after a third-place MVP finish.

That 1983 season was his age-27 campaign, and Guerrero had taken off just as hot. On the day the story was published, he was hitting .299/.383/.545—a pace he basically maintained through the rest of the season, finishing with a .334 TAv, tied with Eddie Murray for the best in baseball that year. The defense, of course, was on less even footing.

The returns are not yet in on this grand experiment. Guerrero looked awful defensively in spring training, making 10 errors. But he has begun to settle down at third, and although he has seven miscues, one of which cost L.A. the 15-inning game with the Expos last week, he's making some plays that Cey probably would not have made.

He didn’t really settle down at third, but how much it mattered is open to interpretation and tied to your confidence in defensive metrics and value measures. Guerrero’s elite offensive performance again made him an MVP contender as the Dodgers won 91 games and their division. Dale Murphy, who won the NL MVP award that year, commented that he figured Guerrero should have won for maintaining his production while switching to third base.

This would all sound like an optimistic episode for Freeman and the Braves if not for the next few seasons. A sluggish start in 1984 led to a benching and a conversation between Guerrero and manager Tommy Lasorda, relayed by the terrific SABR Bio Project.

The manager posed an imagined scenario, asking Pedro to envision himself at third base with the game on the line in the ninth inning. Lasorda asked his player what would be going through his mind.

“God, please don’t let him hit the ball to me,” Guerrero replied.

A July switch to right field provided anecdotal evidence (don’t they all) that a less demanding position freed Guerrero’s mind at the plate as well, and he saw a second-half uptick. But 1985 saw basically the same song and dance play out again, only more extreme. His time at third base ended on June 1 that year, and he proceeded to slash .391/.489/.833 over the next two months, crushing 15 homers in June alone. The position change was a factor in Guerrero’s own explanation, again from the SABR Bio Project, of his renewed success:

“When I was playing third last year, I wasn't patient at the plate. This year I am.” Batting coach Manny Mota attested to his prodigy’s mental steadfastness. “He’s a changed man … He’s happy, and his mind’s clear.”

Neither the “how” of this whole thing, nor the color of Freeman’s mood about it, is likely to affect whether he succeeds at the hot corner defensively. When he was being scouted as a draft prospect—so, as a high schooler—he got high marks for his arm. So there’s that. It remains to be seen whether he has enough agility to hold his own at third.

Surely, the Braves would be delighted if he turned out to be a playable defender at third. They would probably faint at the thought of him performing at the below-average but solid level of say, Justin Turner, or the unproven but OK heights of Travis Shaw. That’s probably not the real concern in a position switch, though, especially not for a team in the middle of a rebuild.

Any theoretical danger is mostly tied up in how the redirected focus and effort might affect Freeman’s offense and in the potential injury risk from encountering unfamiliar scenarios—which seems rather small in Freeman’s infield-to-infield case.

It’s virtually impossible to get a wide view of this topic. You can look for examples, but every situation is so wildly different that drawing conclusions from any of them would probably be analytical malpractice. Harmon Killebrew hopped back and forth between first base and third base repeatedly during his illustrious career, and you’d be hard-pressed to say it had any effect at all. Torre, whose weight loss became a story during his MVP campaign, moved to third from catcher, which is obviously a more difficult defensive assignment.

Other stars, like Miguel Cabrera, Dick Allen, Tony Perez, and Paul Molitor, have been challenged defensively, but typically with positions they had previously played professionally. The one salient point that does arise is that even “coconut snatching” experiments that come to fruition don’t often last very long. Freeman isn’t likely to spend a very large chunk of his career at third base.

If we’re to gain any understanding from Freeman’s move, it is more likely to occur between the ears. What motivated a star, locked into a large and lengthy contract, to volunteer for such a switch? We know most people are self-interested and, despite all the athlete-speak about the team and the clubhouse and all, athletes are not any different.

Could Freeman be considering his own chances at an MVP award? Or the eventual benefits versatility might bring him in December of 2021? It seems like a stretch, but maybe the team’s Matt Adams situation provided Freeman an opportunity to try something he already had his eyes on.

It all makes him an interesting case study moving forward, assuming he does come back and try his hand at third. For all the buzz about the viability of two-way players, teams still haven’t fully explored the possibilities that defensive shifts and improved all-around athleticism might afford them. Does Freeman’s surplus offensive value at third exceed whatever he costs you defensively? Does, say, Nolan Arenado’s greatness mean you could put a lesser defender with a better bat next to him?

And does the top-down approach, a la the Dodgers’ coconut snatching, hurt the chances of the player taking to a new position?

Freeman’s responses to defensive adversity, and to any potential changes in his offensive performance, will be fascinating. If you believe the consultants, his initiation of the change makes Freeman less likely to identify it as a stumbling block, but even if his reactions differ from those previous transitioning players—the ones moved like chess pieces in an organizational game—they won’t give us any answers, per se. At most, Freeman could provide anecdotal confirmation that a perceived blank lotto ticket is better than a prescribed one.

Should he succeed, though, it will be noticed—by both players and clubs with designs on confirming the phenomenon for themselves. And then it’s just a matter of replication.

You need to be logged in to comment. Login or Subscribe
lmarighi
Nice work, I appreciated the historical anecdotes, as I was unfamiliar with Guerrero's story.
Reply to lmarighi
tnt9357
You left out the best part of the heart-to-heart with Lasorda, also at that link:

The skipper asked what else he was thinking.

(Ozzie Smith(!) and Jack Clark would oblige Guerrero in the NLCS by hitting the ball over the fence instead)
Reply to tnt9357