A Box Full of Things to Fill Holes

He entered the house for the last time of the night — and only to pick up his bag and his phone.

“Hey,” she said. “There’s still that big box of baseball cards in the guest room. I need you to take care of them.”

“Can I do it this weekend? I’m really sweaty and I already have a bunch of stuff in my car.”

“I need you to take care of it. It takes up too much room and I don’t have anywhere else to put it.”

Neither did he. Despite what he considered to be a fruitful bout of purging his old possessions, his new studio apartment was still bursting at the seams. The mere thought of yet more clutter gave him the same feeling in his stomach that he got when boarding an airplane.

“I’m pretty tight on space. What if I found someone to take them? Could you hold onto them until then?”

“If you don’t want them, just throw them out.”

He had a short vision of himself doing exactly that after he went through them all and picked out what he thought was valuable. But he knew none of them were. He wasn’t sure if any baseball cards were worth anything these days.

He thought back to that summer when he started going nuts buying buying boxes of old cards on eBay. Much like now, he didn’t know then why it was happening. But they kept showing up — almost daily for a good week and a half. He knows he went through them all, but only once and he really didn’t look at them again.

He then thought of all the stuff he bought back then — stuff that now was haphazardly scattered about his studio — that he thought would make him happy. He realized some time ago what a cliche he’d turned into — the sad man who tried to fill the holes in his life with things. And for a brief two-week period, old baseball cards were the things of choice. They were mostly Topps, with some Donruss mixed in. He came across some of his favorites from his childhood — but he didn’t recognize at least 80% of the names.

It wasn’t like now, where he could damn-near name the starting lineup for any team. A rejuvenated love for the game combined with access to high-speed Internet melded to form the stereotypical baseball nerd he had become — a nerd that couldn’t bring himself to throw away old baseball cards he knew he didn’t want and wouldn’t care about. Was the second wind of his obsession part of the problem, too? Did he look to fill the holes in his life with blogs and advanced stats and fantasy baseball? Was this the impetus for it all? Was this the first sign?

All these thoughts left him as he climbed the stairs again. He was now more concerned about the sweat on his brow. He breached the guest room and grabbed the old beer box full of cards. She had collected them all into one receptacle. Of course she did. An extremely faint smirk came across his lips.

Why Did I Bookmark This Page?

Writing a short semi-regular feature about baseball is a difficult business. First, you don’t have any time to watch actual baseball, much less extract the patterns and trendlines that people seem to want so they can better predict the baseball that will happen without their input the following day. So you have to write about yourself, or at least your limited worldview (I went with alienated lower-middle-class suburbanite), and stretch that into a shape that seems appealing, or at least not unappealing, to the poor readers who stumble across your byline. Hide meaningless with feeling.

Sometimes the storylines fall into place. Other times, like tonight, you get late notice and you have to turn to the collection of notes cascading down a spreadsheet column, mostly forgotten: like half-baked aphorisms, or dry ingredients in a pantry that can’t possibly go together. Here is a small sample of my idea list:

For the last of these, I have bookmarked Cristelli’s minor-league Baseball Reference page. I have no idea why. I do not remember Pat Cristelli, or anything he might have done worth writing about. His stat line:

There’s nothing here that’s particularly good. There’s also nothing surprisingly terrible, just a numeric representation of the Peter Principle. At first I thought that he was the ballplayer in the PCL who tripped over a sprinkler, tore his ACL, ruined his career, sued the ballpark, won, and lived a comfortable, unathletic life. But that isn’t him–no clue who that guy is. I hope I figure it out, so I can write about him. Cristelli, according to Google Newspapers, has never appeared in a newspaper Google has bothered to scan.

What you need is a hook, something to dramatize, extract the emotion. The Baseball Cube includes a season B-R missed: 1981, three years later, a comeback attempt in Single-A. It didn’t go well. He went to the University of Puget Sound, a school I very nearly got a scholarship from. That’s probably not enough. The school was nice. There’s a Pat Cristelli Trucking Company in Jersey, which a transit study found may have suffered some kind of environmental contamination. There’s a Venezuelan sticker from 1977 you can buy for seventeen dollars (with shipping), that features a Pat Cristelli who is wondering why a photograph would be taken of Pat Cristelli: 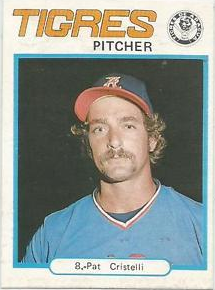 None of it useful, none of it even human. There’s only one other feature to Cristelli’s life not yet mentioned: he is a phantom ballplayer, called up to the majors in September of 1977 and given a uniform, but never the ball. But the sad thing is that even this is barely notable: Wikipedia’s list of phantom players stretches for pages. He’s not even the first phantom player I’ve written about for Short Relief.

So why did I bookmark the that page? I don’t know. Unless it was for this, a trap laid by my former self, designed to drive a stream of consciousness that never meets the sea. Baseball doesn’t guarantee endings; that’s one of the reasons we love it so much, because they feel special when we get them. Stories don’t work that way, we feel betrayed when our time is wasted. Today, your time was wasted in part by a man named Pat Cristelli.

You need to be logged in to comment. Login or Subscribe
heterodude
I'd like to imagine you bookmarked Pat Cristelli for a piece you were thinking of writing on Puget Sound.
Reply to heterodude