Let’s start here. In the now. After a shellacking at the hands of the Dodgers on Sunday, the ever-honest, 40-year-old Bronson Arroyo admitted that persistent shoulder pain might force him to call it a career.

The guitar-strumming beanpole who forced us to consider the term crafty righty has made a habit of outrunning the jaws of obsolescence. He’s been toughing out a return to the majors with the rebuilding Reds this year after completely missing the past two seasons due to injury (an absence that did not prevent him from being traded twice and signing two free agent deals).

This, though, is probably the end for Arroyo. He said it himself. The game is finally going to beat him. 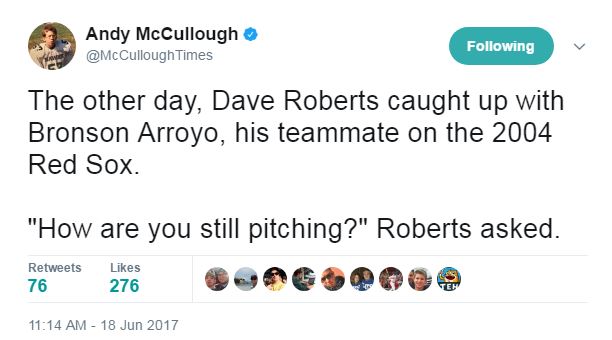 Who would think to ask such a question? At this point, only 10 pitchers have thrown more innings since the turn of the millennium.

He’s no Mark Buehrle, but up until this injury issue with the Diamondbacks, Arroyo’s been out there every fifth day. He is not a star, though he did get Cy Young votes in 2010. He hovers around league-average performance.

Perhaps it was a sign that the end was near when the other pitchers from his draft class started hanging them up. Kerry Wood, Roy Halladay, Jarrod Washburn, Brett Tomko, Ryan Dempster. They’ve all called it quits, some with Hall of Fame arguments and number-retiring ceremonies and video board welcomes to look forward to. He doesn’t have those, most likely. He’s just got this point to prove—sturdier, more empirical, in a way. That he’s still going.

Baseball has always been a business. Those who get to run it virtually always run it as such. As if the strikeouts and walks and runs will be guided by the same semi-predictable forces that guide the dollars and cents.

And it’s always a sort of halfway-acknowledged farce. The calculated risks and itchy trigger fingers of major-league executives reveal this business to simply be a game—either very high-stakes or very low-stakes, depending on your perspective. Sometimes, someone wants to try and shoot the moon. Which is how you wind up with a spring training trade that dispatches Arroyo, a curse-breaking World Series champ, to Cincinnati for a comically powerful 24-year-old named Wily Mo Pena.

Baseball is a "business" in these moments in part because that’s a nice way of diverting attention from the uncomfortable idea of trading people—not assets or investments or equipment of the enterprise, people. And it’s a farce for much the same reason: People are people. And they often surprise you in ways those other things cannot.

Arroyo would go on to Cincinnati, play his guitar around town, make the 2006 All-Star game, and hurl a league-leading 240 2/3 innings with an ERA 42 percent better than league average. After pining for Boston in the days following the trade, he’d come to enjoy Cincinnati, and by the following spring, be dubbed a local “cult icon.” He would sign an extension to stay, mirroring Aaron Harang.

In doing so, he’d lay out lofty goals, the type a player of this absurd game might make knowing full well that nothing ever goes according to plan.

"Hopefully, I can throw 200 innings the next four or five years in a row and give them their money's worth," Arroyo would say.

He’d do it for the next seven. Pena wouldn’t find 300 big-league at-bats in a season again, and his 2017 comeback attempt won’t reach the majors.

“Arroyo,” Joe Buck says, voice rising into a pregnant pause. You can never assume to know what is going to happen when a pitcher lopes off the mound to field a weak ground ball. You certainly can’t assume this or any play will be routine in October, in Game 6 of the ALCS.

You don’t want to have to backtrack in the middle of a call, to become a stammering mess on national TV. And Buck doesn’t. He waits for the play to develop.

“The ball gets loose,” he says as a high-pitched roar erupts like a choir coming in to back him up. “It’s down the right field line. Jeter comin’ all the way around. It’s a one-run game. And now we’re going to have an argument as Francona comes out of the dugout.” 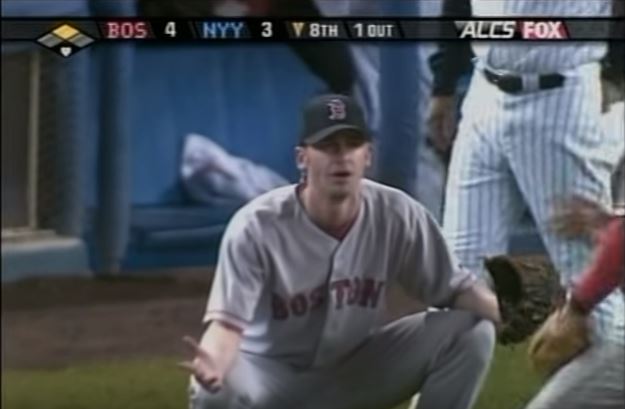 Wait, wait, wait. This is a huge postseason moment. You don’t even have to understand the historical implications, the hubbub of the early aughts Yankees-Red Sox rivalry or the dramatic plot of the one-man-show in the batter’s box. You can just take it as a high-leverage situation in Game 6 of a League Championship Series. 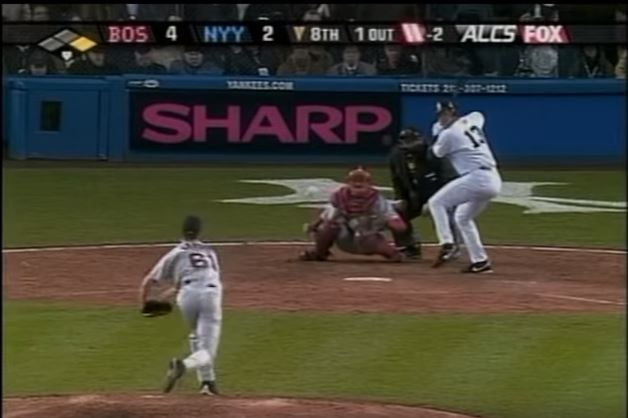 That batter, the one with the storylines circling him like hungry sharks, is Alex Rodriguez. He’s probably the most preternaturally gifted baseball player of his generation. He, of all people, is supposed to be here.

Derek Jeter, the one the sharks never came for, is on first base. He’s doing what he does, breathing life into his Yankees squad, driving in a run now that the bloodied Curt Schilling has left the game. It’s A-Rod’s turn to earn his pinstriped bona fides by delivering in October. All he has to do is square up whatever junk is going to come out of this guy’s hand. 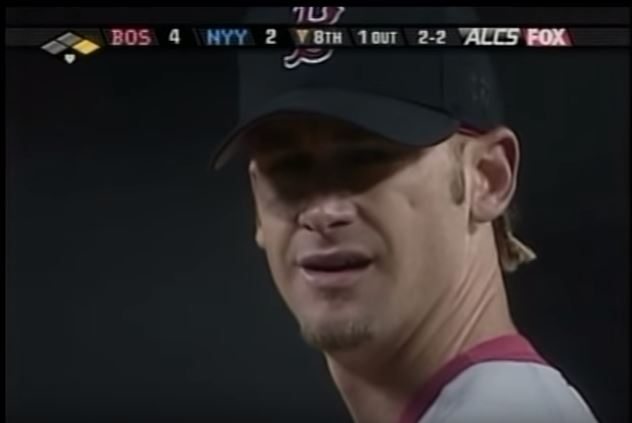 Here is Arroyo (yes, those are cornrows), doing something he was never supposed to do.

It seems self-evident that this guy is not supposed to be relieving Schilling in the eighth inning of a make-or-break postseason game for the Boston Freaking Red Sox, who haven’t won a World Series since 19-freaking-18. If you try to explain why, though, it’s not as easy as you think. Arroyo was a third-round draft pick. It’s not crazy to think a third-round pick could turn out to be a great reliever. That’s possible.

But we know, even on this night in October of 2004, that it’s crazy for Arroyo—claimed off waivers from the Pirates (the Pirates!)—to tangle with the best non-Barry Bonds baseball player in the world. Again.

He’s probably not supposed to do this, either.

Before Arroyo reports to the Red Sox system, having been discarded by the Pirates organization that drafted him, and before he throws a perfect game for Triple-A Pawtucket and gets a cup of coffee with his new big club, he gets his yearly evaluation in the Baseball Prospectus Annual. As far as a consensus on his abilities, this is as good as any:

Arroyo is basically a right-hander with a marginal left-hander’s repertoire. He has a good attitude, decent control, and a usable sinker, but he doesn’t have enough of anything to be successful in the rotation. … If he were 5-foot-11 instead of 6-foot-5, he wouldn’t get as many chances.

Having extended his prospect leash past its intended length, his fastball playing jump-rope with the 90 mph mark, Arroyo is ready to make his debut for the Pirates.

In a year when the BP Annual snidely calls him “a poor man’s Jimmy Anderson,” he’s been called up to make a start against the Braves. He’ll throw five innings to Jason Kendall, allow five runs, get more called strikes than swinging ones, and take a no-decision as the game goes 10 innings before the Pirates win.

He might pause to consider how long his talents will keep him here, in the show. Or he might not—you don’t become Bronson Arroyo by having conventional thought processes. He probably already knows that 90 mph from the right side and a skyscraping leg kick are unlikely to sustain him even to free agency.

Is he already thinking about the sorts of hustle it will take to beat out thousands of other young men who desperately want what he now has? What about the thousands more who are only in high school, or grade school, who are just learning that they want it? He might believe he can pull it off, by manipulating his breaking balls, and changing his arm slots, and doing “whatever it takes,” as quaint as that sounds. He might be able to envision it, even if no one else even thinks to try.

And still, if you tell him—or any other 23-year-old non-prospect—that his last major-league start will occur more than 17 years from now, he’ll rightfully think he’s unlocked some sort of cheat code, that he’s beaten the game. And he’ll have no idea.

You need to be logged in to comment. Login or Subscribe
slonny22
Never forget this local JTM Hoagy commercial in Cincinnati. Bronson rocking out! Come for the novelty and stay for the final Bronson camera stare-down at the end of the commercial.

I wish he would bring back the cornrows for one final start before hanging up his spikes.