Monday was an off day for the Twins, and boy did they need it. As of Friday night they sat atop the American League Central, the unlikely owners of a 34-29 record following a disastrous 103-loss season. Then the second-place Indians came to town for a three-day, four-game series at Target Field and swept the Twins out of first place, thoroughly thrashing Minnesota by a 28-8 aggregate score. In less than 48 hours the Twins went from surprising division leaders to looking like merely something that the defending American League champions had to step over on their inevitable climb back to the playoffs.

Cleveland easily won the AL Central last year before finishing a game short in the World Series, and they were overwhelming favorites to claim the division title again this year. Coming into the season PECOTA gave the Indians a 73 percent chance to win the division—the second-highest mark of any team in baseball—and 61 of our 62 staffers predicted they would win the AL Central. Their slow start combined with the Twins’ surprising adequacy made for a bit of drama, but at this point no one should be shocked if the Indians run away with the division on the way to another deep playoff run. They’re still really good.

What makes the Twins tough to evaluate is that they have half of a good, young, potential-filled team, but the other half of their team is an absolute mess. Minnesota’s position players—led by 24-year-old Miguel Sano offensively and 23-year-old Byron Buxton defensively—are the youngest in the league, yet they rank fourth in defensive efficiency (including first on fly balls/line drives) and seventh in runs scored per game (including first in walk rate). They’re already pretty good and likely to get better. Minnesota’s pitching staff, on the other hand, is a mess and has been a mess since 2011.

Here’s how the Twins have ranked among American League teams in ERA during the past seven years:

Minnesota has the worst ERA in the league for the third time in the past four years, and either the worst or second-worst ERA in the league for the sixth time in the past seven years. That’s an astounding stretch of sustained incompetence. To say that the Twins have had the worst pitching staff in the league during that seven-season stretch would be an understatement—from 2011-2017 they’ve allowed 492 more runs than the second-worst team. And unlike previous years, this year’s disastrous Twins pitching is coming despite above-average defense—their DRA (5.08) and FIP (5.07) are both worse than their ERA (4.97).

Their bullpen ranks dead last among AL teams in ERA, FIP, strikeout rate, strikeout-to-walk ratio, batting average against, home run rate, WHIP, swinging strikes, and fastball velocity, and only Kintzler’s relative proficiency in the closer role has kept things from totally unraveling. Their rotation—even with Santana and Berrios giving them 141 innings of Cy Young-caliber pitching—ranks among the AL’s bottom three in ERA and FIP. Nine pitchers have started at least one game for the Twins and seven of them—everyone except Santana and Berrios—have an ERA above 5.00.

For all of the optimism that the Twins’ good start created locally and for all of the promise that the Twins’ position players possess, the reality is that you simply can’t win with a pitching staff this awful. Certainly it’s possible for the Twins to improve their pitching with enough time left in the season to maintain playoff aspirations in August and September, but can they really be expected to do in six weeks what they have so utterly failed to do in six years? And what shape would an improved Twins pitching staff even take, at this point? What moves could realistically be made, now or closer to the trade deadline? 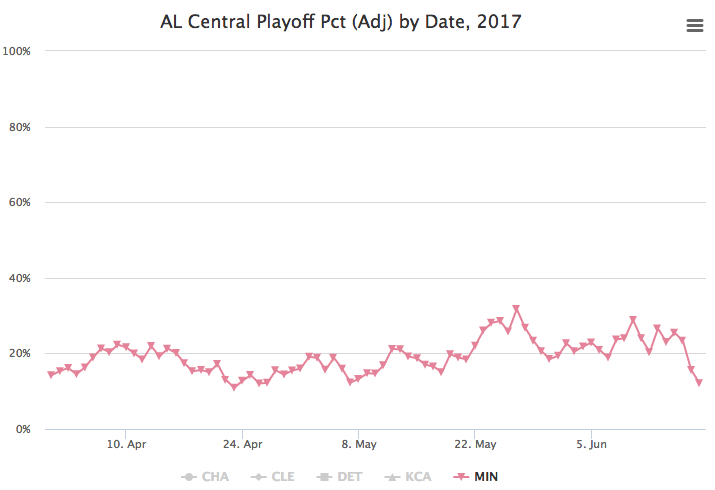 First and foremost, any discussion of potential moves should begin with the idea that the majority of the staff could be replaced. This isn’t just a matter of a couple rotten apples ruining the whole bunch, as the Twins have spent weeks shutting replacement-level pitchers back and forth from Rochester to Minnesota in an effort to have “fresh arms” available to mostly mop up blowout losses. Santana, Berrios, and Kintzler are the obvious exceptions, and Adalberto Mejia, Tyler Duffey, Taylor Rogers, and perhaps Alan Busenitz are probably part of the team’s plans beyond this year, but the rest of the group … woof.

Phil Hughes is on the disabled list and has a 5.00 ERA since 2015, but he likely isn’t going anywhere due to being owed $26 million for 2018/2019 (thanks, Terry Ryan!). Hector Santiago and Kyle Gibson are making a combined $11 million this year, but a clean break would be invigorating. Minnesota’s lone offseason pitching additions were 37-year-old Matt Belisle and 36-year-old Craig Breslow—an investment totaling a whopping $3.4 million—and they could easily be cut after providing a 6.08 ERA. The rest of the 24 pitchers who’ve appeared in a game for the Twins are coin flips to be claimed off waivers.

None of that is good news, exactly, but it is encouraging in the sense that plenty of dead weight could be dropped without long-term ramifications and the bar to clear in replacing them is extremely low. Dreaming about big-ticket items is generally a waste of time for Twins fans, but it won’t take an ace starter or a shutdown closer to improve the staff, because even semi-competent fourth starters and setup men could provide massive upgrades. Those types of pitchers are inevitably available at the trade deadline, often for modest returns, and can be prevalent enough that overpaying for a specific target isn’t needed.

As the Twins begin making calls about veteran pitching help—”do you have anyone available better than Kyle Gibson or Matt Belisle?” is a question built to generate action—they could also look to the farm system for in-house alternatives. Berrios is already in the majors and thriving at age 23, and Mejia was the Twins’ other MLB-ready pitching prospect heading into the season. No one else is as obvious a call-up, but they do have some intriguing bullpen options in the high minors and a pair of good starter prospects faring well at Double-A in right-hander Fernando Romero and left-hander Stephen Gonsalves.

Minnesota had hoped that hard-throwing right-handers J.T. Chargois and/or Nick Burdi would be reliable bullpen contributors by now, but instead both pitchers are injured. What’s left to pick from is not high-end relief prospects, but rather a collection of good-performing arms who, relative to the Twins’ current shoddy relief corps, have a chance to at least provide a semblance of modern-bullpen velocity and upside. Busenitz, who was called up over the weekend, is one example, along with Luke Bard, Trevor Hildenberger, John Curtiss, and Mason Melotakis (and perhaps the return of Ryan Pressly).

Fixing something that’s been broken since 2011 is not a short-term job, but there are two possible paths for the Twins to embark on in an effort to put out the long-burning dumpster fire that is their pitching staff. One involves calling up young, hard-throwing prospects and minor leaguers without previous big-league experience, hoping they’re ready for immediate success. The other involves going after modestly priced trade pickups with established track records of competence—Pat Neshek? Brad Hand? Jaime Garcia? David Phelps?—maybe by dealing away some of the same prospects and minor leaguers.

Most of the Twins’ moves (and non-moves) since replacing Ryan with the Derek Falvey/Thad Levine duo have seemed geared toward biding time, perhaps because the new front office wasn’t entirely sure what all it inherited. If that continues, the pitching “changes” might involve little more than welcoming back Santiago and Hughes from the disabled list, but that status quo would make the Indians’ life even easier and could lead to the Twins being the ones selling off veterans like Santana next month. With or without pitching help Minnesota may be another year from contending, even for a Wild Card, but without it that’s a certainty.

You need to be logged in to comment. Login or Subscribe
TeamPineTar
Great essay, Aaron, with the unifying thread of focusing on Minny's existing personnel against their long, pathetic history. If one comes at it from another angle (schedule & results), the Houston series in Minny a couple weeks ago was almost identical to this weekend's series against the Tribe, HTN winning 40-16. Clearly "not ready for prime time." The Twins also have had a relatively easy schedule. Three weeks of games in July sandwiched around the break--against LAD, NYY, HTN, DET & BALT should vaporize the apparition.
Reply to TeamPineTar
bhacking
The Baltimore series may never end, with neither pitching staff able to get 27 outs.
Reply to bhacking