On Saturday, while facing Hyun-jin Ryu, Joey Votto took a called strike and did this.

This was a weird thing to do. Joey Votto is a kind of weird guy. But that doesn’t mean there wasn’t a comprehensible motivation to his weirdness. 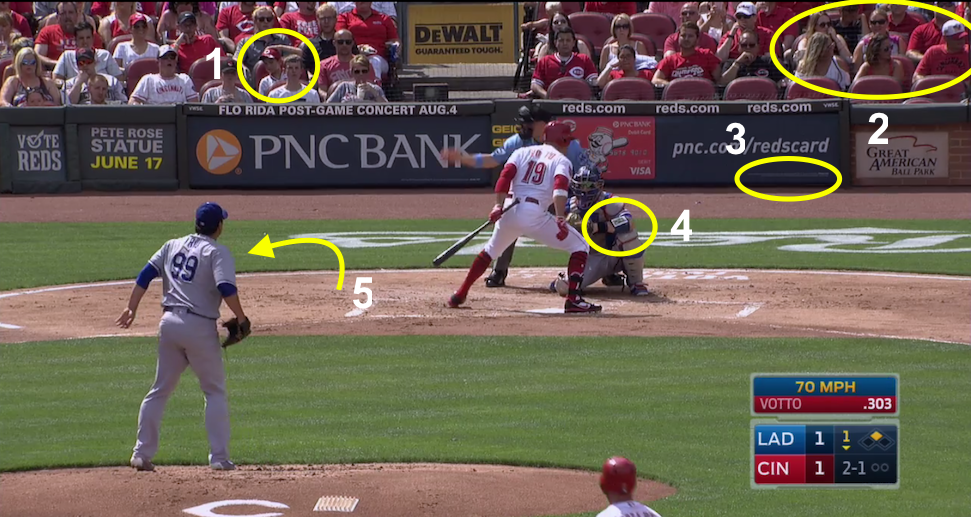 1. This kid is looking at him too directly. Baseball players do their jobs in full view of the public, but I doubt they often pick out individual faces from the crowd. “People” are watching them, not a specific person. Except you know when you get the feeling that someone is staring at you? Suddenly, it isn’t Great American Ballpark that’s watching Joey Votto, it’s this kid, (let’s call him Chris) and Chris has expectations, and he’s craning around the guy in front of him to see Joey fulfill them. Only Joey can’t pitch and he still plays for the Reds, so for a moment, taking a called strike, Joey gets the hell out of dodge. Stop staring, Chris. Go eat a hot dog.

3. He’s not happy with his current bank. Nothing happened, he’s just heard some things about their mortgage practices. He doesn’t feel good about it. And having a Reds Card makes a certain amount of sense from a brand loyalty perspective, though $20 Field Box/Terrace Line tickets (regular ticket price $46/$30) isn’t a perk he really needs. But what does the fine print say? There’s always a catch.

4. It’s a good trick, stealing a glance at Yasmani Grandal’s wristband. Joey Votto is engaged in espionage. This is tradecraft. You can see a lot when people just think you’re being weird.

5. Joey Votto is trying to freak Ryu the hell out. He’s probably succeeding. This was pretty weird.

Or maybe he’s just delivering a punchline we don’t quite get. Nothing is more discomfiting than realizing you have a different sense of humor than someone you know. There’s something very intimate about “getting” the same things. Perhaps that’s the real reason Joey’s still underappreciated. We just don’t get his jokes.

Seeing What There is to See

One of baseball’s pleasures is its languid pace, the way it contains room for so many different things, and nowhere is that space and time more evident than at the minor league ballpark on a themed night.

June 10 at the Pawtucket Red Sox’s McCoy Field was Star Wars Night with fireworks to follow; Leia, Chewbacca, and a host of Imperial brass attended upon the first pitch and anthem, and a pair of Stormtroopers cleaned off the bases at the end of the first inning. As the evening bent toward pyrotechnics, the full stands glowed blue and red with plastic lightsabers. It was, in short, an exceedingly festive atmosphere for what turned into six innings of a pitchers’ duel between the PawSox’s Hector Velázquez and the Buffalo Bisons’ Lucas Harrell.

The same game offered a chance to witness the nightly Advanced Eyecare Race, in which a blue, a green, and a brown inflatable eyeball dash for glory upon contrastingly spindly human legs. Eyeball races appear the minor league world over; it would seem that the costumes are readily available, if not noted for their reliable inflation.

When the eyeball race began, I expected the usual shenanigans and subterfuge: sclera-to-sclera contact, shoving, tripping, and perhaps some nefarious interference from Darth Vader. What I got was a tyrannosaurus rex in the mix, attempting to maul inflatable eyes with inflatable claws.

Even in the context of between-innings entertainments at a minor league ballpark, it surprised me. A prehistoric predator during an eyeball race on Star Wars Night stood in stark contrast to the game’s own quiet rhythms: uneventful fly-outs to center, tidy fielding and clean throws from left side to right.

In the seventh, Buffalo earned its first run on a Jason Leblebijian home run off Jamie Callahan, and in the eighth, Mike Ohlman followed with a two-run shot of his own, and Pawtucket couldn’t answer. The game happened so quickly—eating up a mere 157 minutes in the park that had once hosted 505 minutes of baseball in 1981’s infamous 33-inning affair—that the night hadn’t yet darkened enough for the fireworks, and fans crowded the concourse for ice cream while they waited.

There’s not much to connect all of these disparate elements—Star Wars, racing eyeballs, marauding dinosaurs, each of the discrete plays in the game—except to say that they all happened in one place, on one perfect night for baseball, and I was glad to be there.

Advertising Analysis, from the Expertise of a Man Who Was Friends with a Marketing Major in College

Burrowed into the mind of every baseball fan is a loathsome nugget of doubts that throbs in the late hours: how is Major League Baseball marketing itself?

The timeless game that has dominated the broadcast waves for 140 years and pulled in billions in revenue fights a daily battle. It grapples for the attention of the dwindling few with excess capital to spend on diverting products–air fresheners to mask the presence of nearby feces, whatever utility dryer sheets actually provide, Haruki Murakami books on tape–any of which could become the new national pastime in a moment’s notice.

MLB advertising has centered its fight around the hashtag #ThisSeason, striving hard to differentiate their business from #LastSeason, an inferior product hated by all, including its creators.

Many people remember Knute Rockne’s famous call for his team to “Win one for the Gipper.” Sadly, far fewer recall his detailed plans, discovered posthumously, to remake Notre Dame Football as a lifestyle brand for the hirsute male. In the minds of most, MLB has shamelessly cribbed the notes of dead man. In the minds of a smaller minority, it’s a worthy continuation of his legacy.

However, it’s a campaign with limited upside. In an industry where wearing a hat is a persistent requirement during working hours, standout hairstyles are at a premium. Many have fled to the sport to escape from the tyranny of baldness, countless others still have their hats surgically welded to their scalps for a planned show of union solidarity in the face of a CBA dispute that was resolved without major incident, and modeling John Jaso’s dreads as aspirational can only lead to litigation down the road.

David Wells throws one perfect game, Matt Albers records one save, and the rest of baseball is doomed for eternity to make advertisements seeking to provide hard evidence that its players do, in fact, work out. Giancarlo Stanton could crush a 16 oz. can of the lager of his choosing between his chiseled pectorals, the average fan would still assume every bullpen is full of seven Todd Coffeys. Why MLB still makes an effort at all is less clear than why they ended this commercial with a shot of Terry Francona…at the DMV? A Wendy’s where they’ve just ran out of spicy chicken sandwiches? A particularly disastrous tour of the Celestial Seasonings factory?

Any real effort to convince eventually segues into rank intimidation. If Hall of Famer Barry Larkin can be locked away in the final room from A Clockwork Orange until he feels the compulsion to give nodding approval to Trevor Story and Aledmys Diaz, what do you imagine they can do to you? What is the presence of Jered Weaver to Padres fans beyond a threat that one day they could show up to Petco Park instead and Jeff will be there instead? Major League Baseball is cruel and brutal, but ultimately a bulwark, a compromise between the ideal and something far worse that is always looming*.

You need to be logged in to comment. Login or Subscribe
maphal
I was at the Reds game on Saturday when Votto did that. The home plate ump (who was a minor league call-up) was having an awful day so its possible Votto was trolling him. Its also possible Votto is just losing his mind during the latest 9 game losing streak.
Reply to maphal