There are plenty of theories out there as to the nature of the home run spike lately, and I've got another one to pull on your coat about. Juiced ball notwithstanding, there’s also a legitimate evolution in batter approach and swing plane at play today that’s at least helping do some of the heavy lifting.

The dance between pitchers and hitters, we know, is a complex, ever-evolving relationship of adjustments and counter-adjustments. As the dawn of Big Data increasingly began to confirm that ground balls are the bee’s knees for limiting damage, pitchers quite naturally began to adjust by trying to coax as many of those suckers as possible. They’ve done so by increasingly attacking the lower portions of the zone (and beyond) over the past decade, attempting to sneak under barrels with plane and by manipulating the ball to put north-south action on it.

Check out the progression of pitches in the lower two- and three-fifths of the zone in recent years:

It’s been a slow but steady march to the bottom. In the 2017 season it’s not really all that early anymore, and pitchers are currently throwing more sliders and changeups–not by a lot, mind you, but enough to be notable in the aggregate–than they have in recent years. And low pitches overall continue to be up about 5.5 percentage points, continuing the last decade’s trend.

And yes, yes, strikeouts are way up too, and those are bad for hitters. But a funny thing has started to happen in between whiffs: an increasing number of hitters have begun to gear their swings towards attacking those low pitches and driving them in the air more effectively.

Russell A. Carlton recently pointed out a huge surge in the number of home runs being hit off fastballs over the past couple seasons, and we can add to that list a qualifier of more low fastballs. Batters are seeing more balls down low, and they’re adjusting their swing mechanics to help them hit more of ‘em out of the yard.

It’s certainly not like creating good plane on a swing path is a new concept. Hell, the Greatest Hitter Who Ever Lived free-styled on that ill beat decades ago:

But something has indeed happened over the past few years, where previously accepted conventional wisdom about the proper approach to hitting low pitches has not only been challenged, but crushed authoritatively with carry to the pull side by a certain school of hitting coaches.

Evolution has come quickly, and it’s not by accident, either. "The culture has changed, training has changed, and coaching has changed," says East Valley High School coach Craig Hyatt. “More coaches who are training these guys are embracing the science and data, and they see the hitters getting paid for the long ball and balls in the air. In the air is okay, and you don’t have to slam the ball in the ground just because it’s down in the zone.”

Hyatt and others credit slow-motion video with opening up doors to studying the swing in progress and allowing hitting coaches to teach new strategies. The technological and device boom of the last decade has democratized access to both data and video, and with it birthed a new political theory on the swing: find a way to get balls–wherever in or around the zone they’re pitched–into the air and with carry.

To accomplish that goal, Hyatt argues that hitters have to create “depth behind the ball with barrel speed.” This is a concept that BP prospect team member Derek Florko got into a bit in our look at bat speed a few weeks ago, and hitting coach Chad Longworth elaborated thusly: “The intent to drive the ball in the air creates deeper barrel acceleration, allowing the players more adjustability deep in the zone and also making it easier to get underneath the pitch down to hit it on the upward plane.”

Get your barrel moving below the ball early, in other words, so you can accelerate up to meet it.

It’s a direct rebuke to the concept of a “short” swing as desirable for a hitter, particularly as a means to reach lower pitches quickly. Continues Longworth: “The direct-to-the-ball approach creates an almost impossible swing pattern to get on plane with the pitch down.”

The so-called “Stanford Swing” is probably the most extreme example of this theory on hitting, which emphasizes a flat, short bat path and punched, opposite-field contact as a primary goal. Here’s a prototype of that model of swing mechanics, brought to life by former Cardinal shortstop Drew Jackson at Single-A last year:

The barrel on this swing launches from a higher hand-load position that leaves the front arm stiff and unable to create extension during the barrel delivery. That means the barrel is unable to get out in front of the hands in the impact zone. The bat’s trajectory into the zone is also steep, and the swing plane is flat through the hitting zone, to where the margin for striking underneath the ball’s center of gravity, let alone driving up through it to generate lift and carry, is very thin. And it gets thinner still the farther down in the zone the pitch location is.

Contrast that swing approach to resident standard-bearer of the other polar extreme, Ryan Schimpf of the Padres. Schimpf hit a buck-fifty-eight and got sent back to the minors, yet he's still produced the 16th-most VORP among third baseman, and currently sits ahead of dudes like Kyle Seager and Jose Ramirez. Matthew Trueblood dove in pretty deep on Schimpf as a product of our evolving environment last month, and the training backs that up.

Schimpf employs “Low T” mechanics on balls down in the zone. Here he is at the point of contact going down to get one: 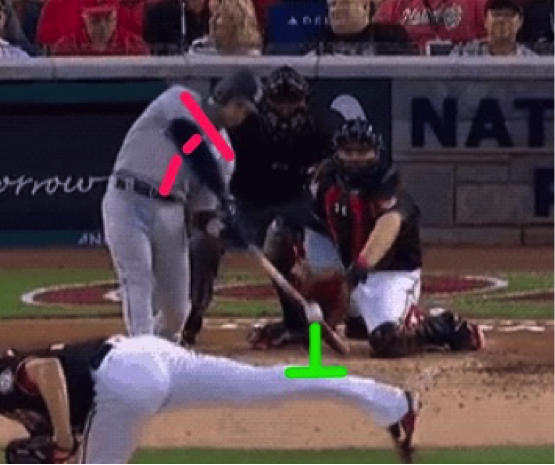 By emphasizing bending his left side back and using the hips as a kind of hinge, Schimpf and others who employ this approach create an early angle up toward the ball’s plane, regardless of the height of the pitch. This move, per Hyatt, “teaches the body to transition down and behind,” and by driving off the back leg and angling the shoulders more steeply, the hitter can get the barrel on plane early to meet and loft balls out front.

This isn’t a catch-all solution, of course. Carleton got into this in a highly-recommended read the other day, and there are, indeed, limitations to the efficacy of a “just hit fly balls, dammit!” approach to swinging. Hitters who don’t time and execute a leg kick correctly, or don’t quite get their shoulders squared at impact … those are marks of an inefficient swing, and major-league pitchers with major-league velocity eat inefficiency alive.

The doors are open, though. And in a break with history, those with the physicality to pull it off have been welcomed to walk inside. Strategic evolution is playing a not-insignificant role in more hitters generating runs for their teams by hitting baseballs very, very far in the air.