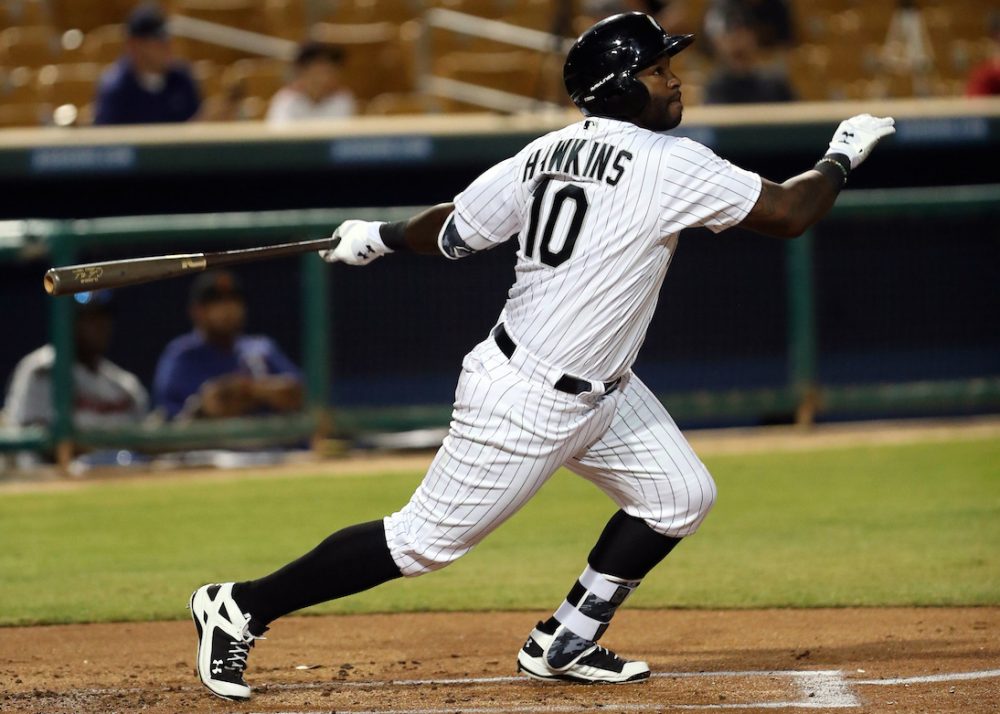 I’m sure I had heard of Courtney Hawkins before the 2012 MLB Draft; he was a fairly high pick in the first round, and I’ve heard of all of those guys weeks or months ahead of time, if not more. But it feels right to say the first time I saw Courtney Hawkins was during the draft telecast on MLB Network, doing a standing backflip on live television. That pretty much summed up Courtney Hawkins at the time of the draft: fun, entertaining, and very athletic. He made a few short cameo stops in the minors after the draft, getting pushed up all the way to a couple weeks in High-A. There were concerns about the hit tool and contact ability, but really no more than your normal prep draftee.

I made the point in my Micker Adolfo Ten Pack report this week that while we always say “don’t scout the stat line,” there are always stat lines that are so extreme as to be telling the full story. Courtney Hawkins, for instance, hit .178 with a 29/160 BB/K ratio in 2013 in High-A, that first full post-draft year in which he reasonably should’ve been in Low-A or even short-season ball. I’m sure somewhere in the annals of baseball history there’s someone who’s been that bad over a full, healthy MiLB season and still turned into a good MLB player, but I cannot think of one off the top of my head.

Zach Mortimer saw Hawkins that summer, and just a month after another BP writer put a 60 OFP on Hawkins—roughly in line with what everyone else had been projecting for him—threw a much-debated 30 grade on the then-still touted prospect, projecting him as an organizational player. Four years later, Mortimer’s report looks prescient: he added bad weight that sapped what was higher-end athleticism, there are still minimal bat-to-ball skills, he still cannot recognize pitches, and the power still exists but the contact ability is so bad that it doesn’t matter. Since 2015, he’s played mostly at the Double-A level, putting up a .626 OPS and striking out a third of the time.

A few weeks ago, the White Sox demoted Hawkins down to Low-A—the level he never should’ve blown through in two weeks five years ago—after his recovery from a thyroid issue. Unlike the rest of Kannapolis, I only got a one-game look at Hawkins, but it was pretty telling. He faced a high-level arm three times in top prospect Adonis Medina, and appeared to have no idea what pitch was coming at him, repeatedly swinging at sliders feet outside while taking pitches over the heart of the plate. Medina struck him out all three times. His next at-bat was against Casey Brown, a soft-tossing generic lefty signed out of the Frontier League this past offseason. You can pretty much guess what you’re getting from Brown: something pretty straight, near the zone, and not that hard, and Hawkins turned on one hard, doubling off the wall. By the triple-slash, Hawkins has been having his first success in years in Low-A, but the Casey Browns get cycled out for more Adonis Medinas as you rise in levels.

At every point since finding out Hawkins was demoted back and playing in Lakewood, I’ve been struck with one question: why? I cannot figure out why for the life of me Hawkins is still an outfielder in the White Sox system. He was a first-round pick five years ago, and teams have started giving up on first-round picks from five years ago. Stryker Trahan and James Ramsey have been released, and others like Victor Roache and Ty Hensley have been dealt for minimal return or selected in the minor-league phase of the Rule 5 draft. Hell, the sixth pick in the 2014 draft, Alex Jackson, was moved in a change-of-scenery trade for modest value. Staying in the White Sox system as a hitter can’t be doing Hawkins any good at this point, can it?

I note “as a hitter” because while I am pretty sure Hawkins has no MLB future as a hitter, I’m not nearly as about his potential as a pitcher. He was a significant enough two-way prospect in high school, throwing in the low 90s, and while the rest of the physical tools have diminished or even disappeared, he still throws well enough in the outfield. Hawkins doesn’t hit well enough to be another Chris Gimenez or even Christian Bethancourt, but he might pitch well enough to at least make The Show.

I often wonder about the mindset of the player too. Does Courtney Hawkins still believe? A Chicago Tribune article before the season described him as “happy and grateful” to still be paid to play baseball. And maybe that’s just the answer—an organization keeping the slightest glimmer of faith on a once-heralded name that can still show you something once in a blue moon, and a player willing to keep playing baseball because it’s baseball.