Something about Mariners left-hander James Paxton makes people grab the nearest hyperbole and fire it at the wall with gusto.

Over the winter, Mariners manager Scott Servais said that Paxton’s slider “grades out better than [Clayton] Kershaw’s,” an eye-popping bit of exaggeration made all the more odd by the fact that what Paxton throws is much more cutter than slider. Jeff Sullivan (God bless him, because without him you’d just have to take my word for it that this happens often) recently called Paxton the AL’s best left-handed pitcher—implicitly pushing him past Chris Sale on that list.

It’s not hard to see where that comes from. Paxton throws hard (and harder now than ever! Who does that?), has three really good pitches and a changeup that, well, it’s a changeup anyway, and he just physically dominates when he’s on the mound. He’s always had cachet, because of his strange path to the success he’s finally finding now, but blossoming into a true ace has sent his stock through the roof. You can tell he’s a budding Mariners legend, because he’s even been given a nickname. There was the Kid, and there was A-Rod, there was King Felix, and now there’s the Big Maple.

Paxton’s season has more or less lived up to his lofty billing. In fact, there were signs of a real explosion in value last year, when he posted a 75 cFIP. That figure has hardly changed this year (it’s down to 74), but the numbers around it are starting to circle up and sing in unison. His DRA is down from 3.55 to 2.27, and his DRA- from 79 to 49. The difference DRA is picking up on is that, even correcting for the much-improved Mariners defense, Paxton is allowing fewer hits and extra-base hits. He’s limiting quality contact. Statcast data corroborates DRA on that front.

The league’s average launch angle against Paxton is creeping up, into a very favorable territory. Opposing hitters are hitting the ball with so much less authority, though, that it doesn’t matter. Most of the added fly balls he’s giving up are lazy flies, and most lazy flies are easy outs. That’s because he’s spinning the ball better than ever, such that hitters are missing the good part of the wood, or missing altogether. He’s added 147 revolutions per minute to his fastball over 2016, and that 2016 mark was a substantial increase over 2015, too. His cutter has added spin, and his curve has done so even more dramatically than the fastball.

While average spin can be unhelpful in a vacuum, the change has been nothing but positive in Paxton’s case. That’s because he didn’t make it in a vacuum. His increase in spin came with a lowered arm slot, an adjustment he has in common with fellow spin-rate riser Brad Peacock of the Astros. Also like Peacock, Paxton increased his extension at release, and also like Peacock, he’s seen his raw velocity rise. The combination of all those factors has led to nothing but weak contact and empty swings, as batters try to fight off pitches that are getting on them more quickly than ever. (Indeed, no starter since 2010 has induced batters to hit the ball to the opposite field as often as Paxton has so far this year. Hitters are mostly late on his stuff.)

Whenever a pitcher lowers his arm slot, you should expect a bit more lateral movement on his fastball. Whenever a pitcher increases his spin rate, you should expect a bit more vertical movement. The funny (and perhaps wildly valuable) thing about Paxton, though, is that he violates both of those expectations. Paxton’s horizontal movement has decreased this year, because the change in arm angle has come along with a change in spin axis. As a result, Paxton has been able to command the pitch better horizontally, to both sides of the plate.

That’s the opposite of what one would normally expect, but it seems as though more backspin and less sidespin have helped Paxton keep the pitch in line. That change in spin axis has also kept the ball from sinking more, as one would normally expect when a pitcher lowers his slot. The fastball just isn’t doing what hitters expect it to do, given the way Paxton is coming at them.

At this point, then, Paxton is a huge lefty with elite velocity; a cutter that stays on plane with the pitch and makes life tough on lefties; and a curveball that represents a clear and present danger to every ballpark's worm population. If you’re getting swept up in a Servais- or Sullivan-level hysteria, I can’t blame you. I do, however, have some cold water in this bucket here, and it’s getting too heavy to carry. 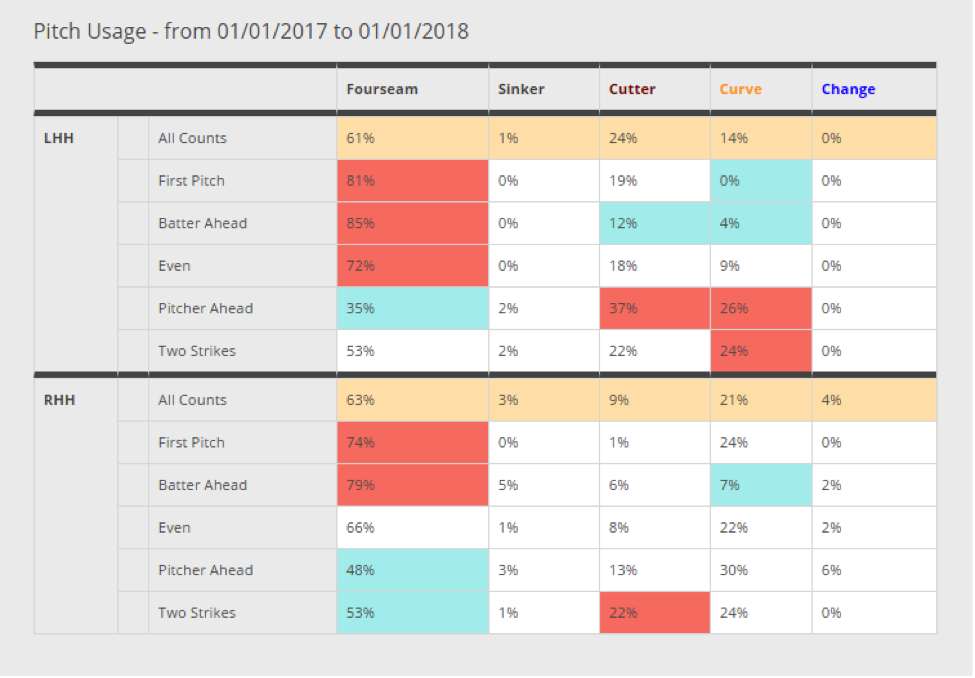 There’s really no reason why Paxton ought not to trust his secondary pitches when behind or even in the count. He’s able to throw both pitches for strikes when necessary—especially the curve, which he nonetheless gives up on entirely when he falls behind. He just doesn’t trust those pitches the way he should, yet. When Paxton gets ahead, batters have no hope: the chances of each type of pitch coming their way become almost equal. When he falls behind, though, batters have a chance to do what they’re eager to do virtually all the time now: sit dead red. That kind of advantage makes the whole league hit like Aaron Judge:

Relatively little of what Paxton is doing this year is truly new. Eno Sarris wrote about his change in arm slot, and then a move toward using the cutter more and fastball less, and then a mentality shift that brought it all together, as Paxton began to bust out last June. He’s made small changes, like favoring the knuckle curve over the cutter, taking more off the curve, getting around the cutter to achieve more tilt and less drop, and the aforementioned change to accent backspin more.

He’s yet to make the adjustment that could really turn him into a peer of Chris Sale or Clayton Kershaw, though. Here’s Sale’s usage chart: 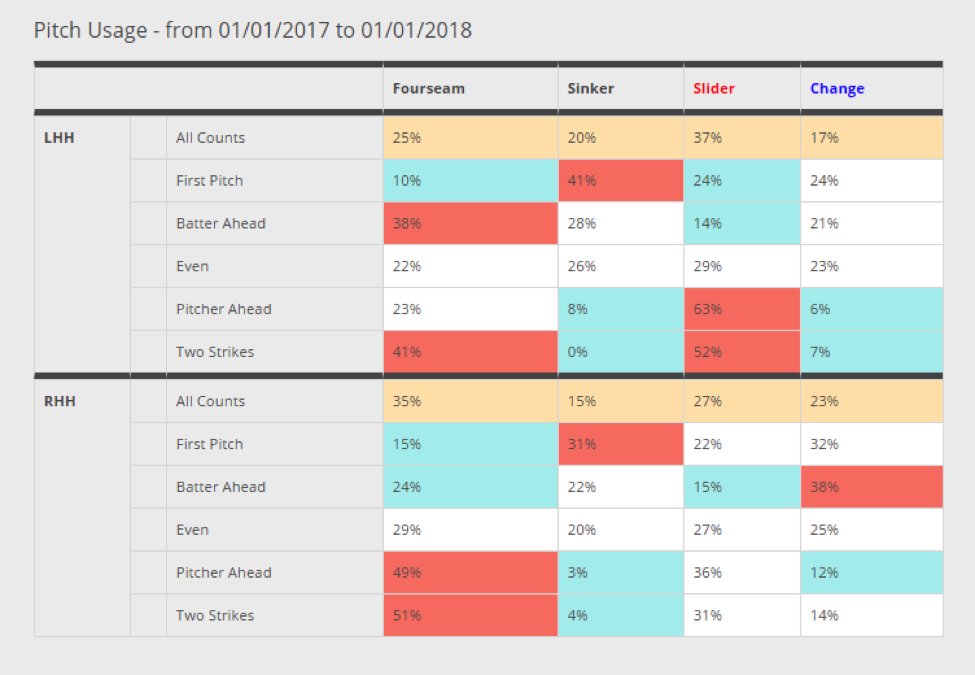 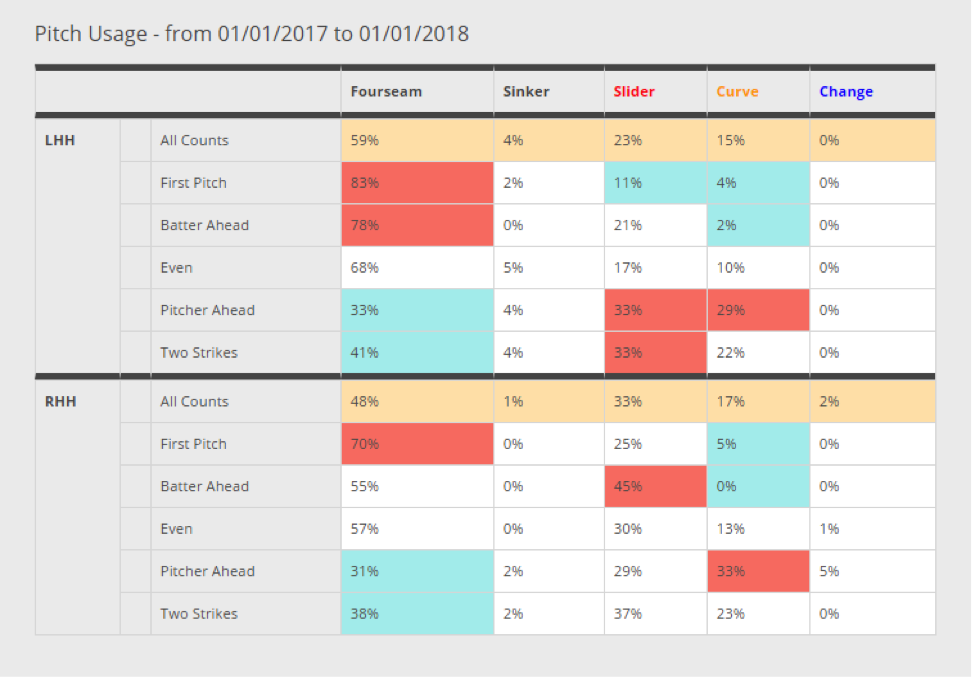 Sale is a true four-pitch pitcher, which neither Kershaw nor Paxton can really claim to be. That helps. Still, neither guy goes into a shell when behind in the count the way Paxton does. This kind of oversimplification—what amounts to a capitulation to the conventional wisdom about fastball counts—is the only thing holding Paxton back from becoming—if not the best left-handed pitcher in the American League—an unstoppable force. Well, it’s the only thing holding him back right now.

If and when he fixes it, batters will find some other way to attack him, and he’ll have to make a new set of adjustments. This is why baseball is so easily bent, but never broken. Even while we wait to see Paxton’s next adjustment, the ones he’s made in the early going—which build on the ones he made last season—have made him a top-echelon starter.