Last Wednesday, Mike Zunino walked off the Mariners against the Minnesota Twins with a two-run shot to deep right center field. As Zunino rounded the bases, and the Mariners assembled at home plate to celebrate, Robinson Cano began directing traffic. He moved Boog Powell over here, and Ben Gamel over there. He made sure the path to the plate was clear. It was a small moment, but it suggested that Cano had a plan. It suggested there is a way in which this is done. And while this is speculation on my part, below is how I would hazard baseball men understand their place in the world, in the moment of the walk-off. The Kicker (3): You’re there to kick the runner in the butt, or the upper thigh, because you love him. He’s a hero. You’ve practiced to avoid the knee, and always lead with the toe. You’re unsure why you relate to one another this way.

The Instigator (4): All it takes is a forceful smack on the dugout rail; an extra loud “WHOOP!”; a mouth held too-ajar. You’re surrounded by mostly grown men. They’re excited but know somewhere deep down they shouldn’t be this excited. But that’s why you’re here. You supply the push.

The Butt Smacker (8): You will give several small pats on our hero’s butt, before delivering one large smack you worry was too strong and that will give you social anxiety in the clubhouse the next morning.

The Clothes Ripper (9): When you were a young man, you were taught to fear your feelings and now you’re unsure how to express joy in purely positive terms.

The Bench Bat (10): You’re only on the 25-man because that one guy is on the DL. Your name is probably Tyler.

The Game’s Most Effective Reliever (11): No one is going to talk about your performance, but dammit they should!

The Game’s Least Effective Reliever (12): No one is going to talk about your performance, but dammit they should!

The Hugger (13): You just want everyone to do their best, and have a good time, and maybe have brunch after. You know, if it’s an early enough game. Otherwise drinks, with some heavy apps.

The Bearer of The Half-Full Bottle of Sports Drink (17): This bottle is never full; you are dumping a half-drunk mix of spit and sugar and food coloring on supposed friends, you animal.

The Starter (18): You didn’t help matters with your start, but you can’t go back to the clubhouse because you’d look ungrateful. So you’ll linger here on the periphery of the celebration. You’ve been given a gift; the trick now is for no one to see you walk away with it.

The Skipper (19): How many times a year do managers awkwardly kiss their players in the corner of the mouth because instead of them both going to their right side when they move to hug, one goes to his left and the other goes to his right, and they both go too fast, and then it’s too late?

The One Carrying the Gatorade (20): Where the hell did you come from?

Bench Coaches (21, 22, 23): You will try to vary your hugs coach to coach so that you look cool and different. You will fail, like most uncles do.

The Bat Boy (BB): If you don’t get the helmet and bat out of the way, someone is going to trip and tear their ACL while being crushed by their teammates. You’re secretly the hero in this whole affair. Essential! No one will ever recognize you. But we know. We know.

This all assumes the opposing starter leaves the field in a timely matter; if he lingers, it all feels a bit showy. 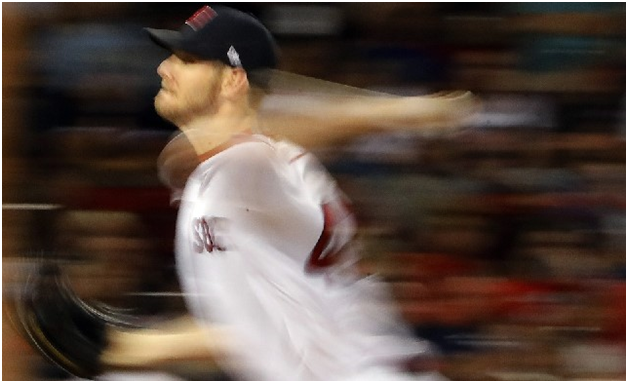 We don’t often talk about the baseball player as genius. A cursory search of the BP archives shows that the term is almost always used hyperbolically, and even then largely in describing managers and front office personnel. There are fairly obvious reasons for this: playing baseball is not an intellectual pursuit, and we usually use the term “genius” to refer to intellectual outliers; even bright baseball players are rarely given the platform to speak about their intellectual pursuits; what makes the best players the best are their physical abilities, not their mental abilities.

In light of this, I was struck by the similarities in two things I read this past week. One is this profile of Chris Sale by ESPN’s Jason Schwartz. The other is Masha Gessen’s book Perfect Rigor regarding Grigori Perelman, the mathematician who solved the Poincaré Conjecture, the single hardest problem in mathematics that’s been solved this century. I’ve put some cleaned-up quotes below; while Gessen and Schwartz write differently enough that you can probably guess which is which, to me they could be describing the same person:

The similarities don’t end there–for instance, Perelman’s disdain of publicity’s tendency to get in the way of doing math resembles Sale’s motivation for destroying throwbacks he viewed as hurting the team’s chances of winning–but I’m not sure which direction to go with them, and I don’t want to overstate the similarities. Given that, I guess I’ll proceed with an observation and a suggestion.

The observation is that all behavior falls on a continuum, and Perelman and Sale are both extreme examples of behavior that’s much more common in their chosen profession than in everyday life. Most mathematicians are quirky and feel strongly about structure and rigor, often to their detriment in social circumstances; baseball players largely seem to be redasses. (I’m relying on hearsay for the latter point.) In each case, the unusual behaviors aren’t directly rewarded, but they are correlated with other traits that are helpful, so they’re substantially over-represented.

The suggestion is that, when we think about players as people–whether in relation to their performance or to their existence within our broader culture–we acknowledge that while they are people just like us, they’re different in ways that go beyond how hard they can throw a ball. People are right to criticize the norms that enable toxic or violent behavior, but as with any other sort of genius, there are personality traits tolerated, encouraged, or rewarded by their field that affect how they approach everything, and that skew will inevitably lead to friction with mere mortal ideas of appropriate conduct.