Even at its best, baseball invites doubt. We question whether the Clayton Kershaws and Mike Trouts will ride their career-high numbers to Hall of Fame ballots, whether hitters can best 121.1 mph. home runs and 167.8 career WARP, whether perfect games will remain intact for their requisite nine innings. Part of the beauty of baseball is found in its unpredictability and variety, making the payoff that much sweeter when it finally comes around.

Carlos Martinez’s moment of doubt came in the seventh inning of Saturday’s matinee against the Phillies. He had six scoreless innings under his belt and had just reached his 79th pitch of the afternoon, settling Cameron Rupp’s at-bat with an inning-ending groundout. Then came this pitch from Philadelphia right-hander Jeanmar Gomez:

The ball appeared to strike Martinez’s fingertips as he veered away from it, and he later explained to reporters that he saw the pitch coming toward his face and was trying to avoid further injury. Instead, Gomez’s 87.7 mph sinker just grazed Martinez’s pitching hand, giving manager Mike Matheny some pause before allowing his pitcher to take a spot on first base. Martinez came around to score on a Jedd Gyorko sac fly, cementing the Cardinals’ seventh and final run of the day:

Luckily for the Cardinals, their ace didn’t appear to suffer any residual pain from the hit by pitch and was able to compose himself for the remaining six outs of the game. By the ninth, Martinez began ramping up his pitch velocity against the Phillies, topping out at 100.2 mph on a swinging strike three against Howie Kendrick. 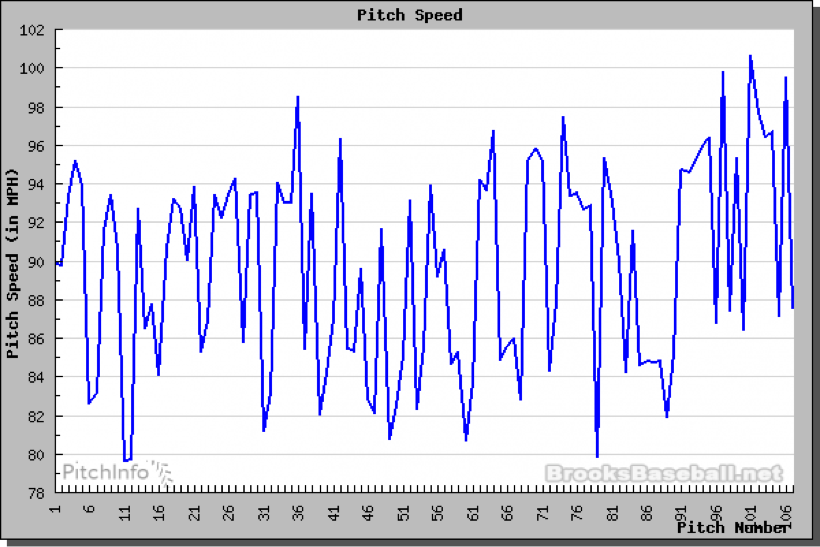 Per Statcast, Martinez is just the second starting pitcher to hit 100 mph in the ninth inning, a feat made more impressive by the 100 pitches that preceded it. He needed just six more to polish off his first career complete game, inducing a groundout from Maikel Franco to strand Tommy Joseph and cap a four-hit, 11-strikeout performance.

The 2,000-strikeout club gained another member on Sunday: Nationals ace Max Scherzer, who pitched to his 2,005th career strikeout following a 10-strikeout outing against the Rangers.

Scherzer entered history in the fourth inning, whiffing Nomar Mazara on four pitches for no. 2,000:

He’s the second starter to reach 2,000 career strikeouts this month, after Clayton Kershaw made the list two weeks ago. By doing so, he unseated Kershaw as the third-fastest pitcher to rack up 2,000 strikeouts, reaching the mark in just 1,784 innings. (Kershaw, by comparison, did it in 1,836 innings.) Despite their well-documented prowess on the mound, neither pitcher came close to topping Hall of Fame hurler Pedro Martinez, who leads all pitchers after striking out his 2,000th batter in just 1,715 1/3 frames during his 2002 season with the Red Sox.

The Nationals, meanwhile, squandered Scherzer’s gem, coming up empty against rookie right-hander Austin Bibens-Dirkx. Brian Goodwin put the Nats on the board in the first inning with a solo shot, but the rest of the club’s bats were quiet against the Rangers’ pitching staff, collecting three hits and stranding two baserunners en route to a 5-1 loss.

While Martinez and Scherzer were busy dominating the headlines over the weekend, Aaron Judge stole the spotlight at the plate not once, but twice. The Yankees’ power-hitting phenom produced several mammoth home runs, beginning with a first-inning blast against the Orioles’ Chris Tillman on Saturday:

The home run left Judge’s bat at an estimated 121.1 mph, establishing a new record for the fastest hit in the Statcast era. It even eclipsed the mark set by Giancarlo Stanton back in 2015, when he roped a 120.3 mph single against the Rockies’ Kyle Kendrick.

Judge’s second record-setting homer arrived during the sixth inning of Sunday’s series finale. He worked a 1-1 count against righty reliever Logan Verrett, barreling the pitch an estimated 495 feet into the center field bleachers:

That’s the longest home run of 2017, besting Jake Lamb’s 481-foot shot back in April. With a third and final home run in the seventh, the rookie’s self-directed hit parade brought his home run total to 21, good for most among major-league batters.

What happens when Giancarlo Stanton needs a day off? If you’re Marlins skipper Don Mattingly, you call on Ichiro Suzuki.

The 43-year-old outfielder filled in for Stanton on Sunday, manning right field for his seventh start of the season. He did an admirable job, too, not only emulating his teammate on the field …

… but at the plate, mashing his second home run of the season to get the Marlins on the board in the eighth inning:

Stanton is expected to return to the lineup on Tuesday after rehabbing a bruised right hand, but until then, it looks like he doesn’t have anything to worry about.

Good defense is best when paired with good timing, and on Friday, Tommy Pham had both. He laid out for a game-ending grab in the ninth inning, snaring a line drive from Freddy Galvis to preserve the Cardinals’ one-run lead and snap their seven-game losing streak.

In Pittsburgh, Andrew McCutchen gave catcher J.T. Realmuto the perfect opportunity for another standout defensive play by leaping over his head to avoid a tag at the plate. Realmuto simply stood up in order to make the tag, and … well, it’s hard to clear 6-foot-1 even with a running start.

Five weeks ago, Jameson Taillon underwent testicular cancer surgery. On Monday night, he’ll take the mound against the Rockies for the first time since his treatment, in what has been both an impressive and incredibly speedy recovery process. Taillon (3.88 DRA, 89 cFIP) completed three minor-league starts over the last month and appears to be in fine shape to reclaim his spot in the rotation, though the Pirates plan on easing him back into a full workload. Facing Taillon are the Rockies, who have dropped just two of their last 10 games in June and are coming off of a 7-5 loss to the Cubs on Sunday (7:05 ET).

Over in Boston, Rick Porcello is still trying to get his groove back. The reigning AL Cy Young award winner (4.91 DRA, 97 cFIP) has been unlucky and unproductive on the mound this season, scattering a league-leading 104 hits over his first 80 2/3 innings and pairing a career-average 97 cFIP with a career-worst .361 BABIP. His stats don’t paint a perfect picture, with bad defense, bad luck, and bad location accounting for some of his poor results, but a turnaround can’t come soon enough as the Red Sox try to pull ahead of the first-place Yankees. The righty should have an easy go of it against the Phillies, whose five-game losing streak feeds into a league-worst 21-40 record (7:10 ET).

You need to be logged in to comment. Login or Subscribe
bhacking
I've heard Greg Zaun say on the air that Suzuki showed power in batting practice and could easily have hit 20 - 25 HR's per year he was such a good hitter, but that instead he would just slap the ball the other way and focus on base hits even when there were runners in scoring position.
Reply to bhacking