Last month, I introduced the Gini Coefficient, a statistic better known for measuring income inequality, as a way to measure inequality among home run hitters. The conclusion was that as home runs have become more prevalent, their distribution has become more equal: There is less inequality among home run hitters (measured by the Gini Coefficient for home runs among all batters with 50 or more plate appearances) than ever before, and inequality has steadily declined since the Babe Ruth-dominated 1920s. The record number of home runs in recent years has been the product of more and more batters hitting 20-plus, not a handful of standouts hitting 40, 50, or more.

I thought that was an interesting finding. By and large, there hasn’t been that kind of shift in baseball. Take strikeouts. You probably know that strikeouts have been steadily increasing, pretty much throughout baseball history. Here’s a chart showing the percentage of all strikeouts per season generated by the top strikeout hitters, where “top” is defined as the n players with the most strikeouts, and n equals the number of teams in the league (e.g. the top 16 through 1959 and top 30 since 1998): 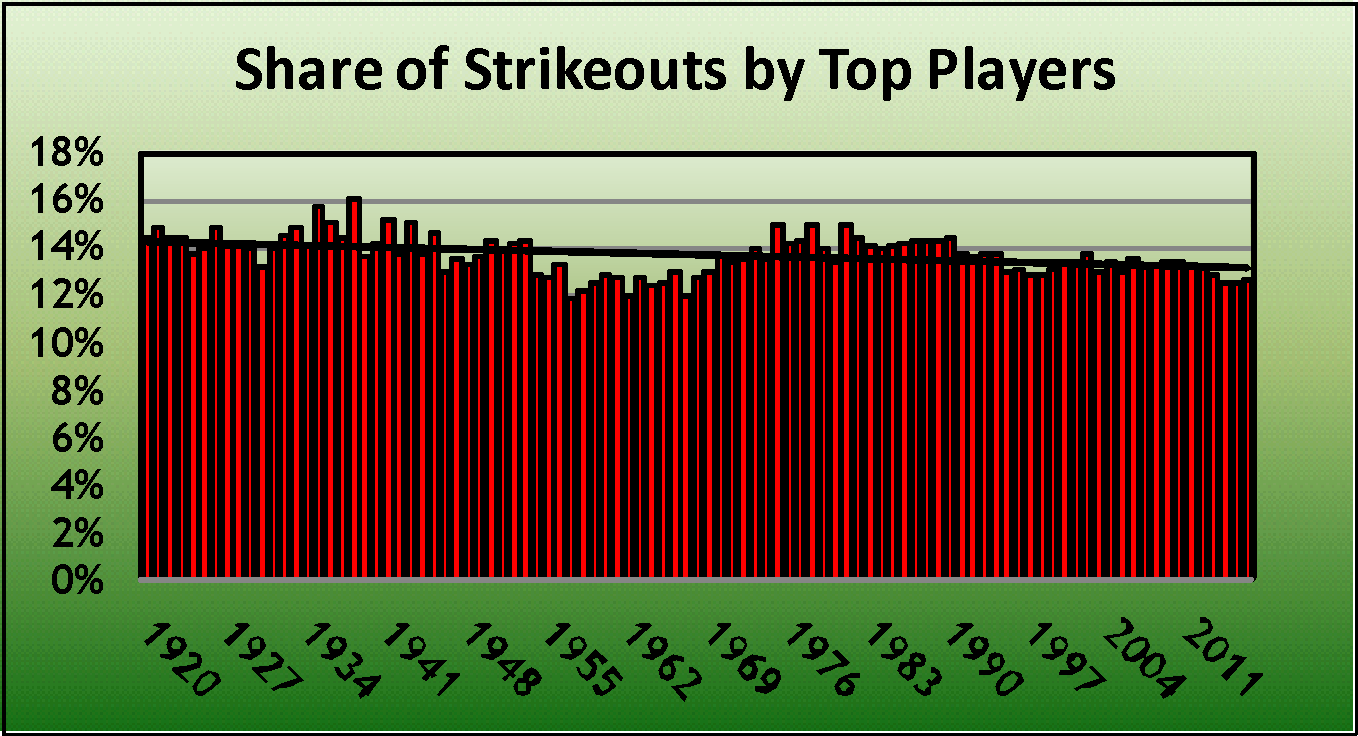 I threw in a trendline for you, but you really don’t need it. The percentage of strikeouts generated by the “strikeout elite” has declined, but ever so slightly. It barely counts.

The Gini Coefficient for batter strikeouts concurs. It measures inequality on a scale from 0 (perfect equality) to 1 (perfect inequality). As with my work with home runs, I’m using every player with 50 or more plate appearances in this analysis: 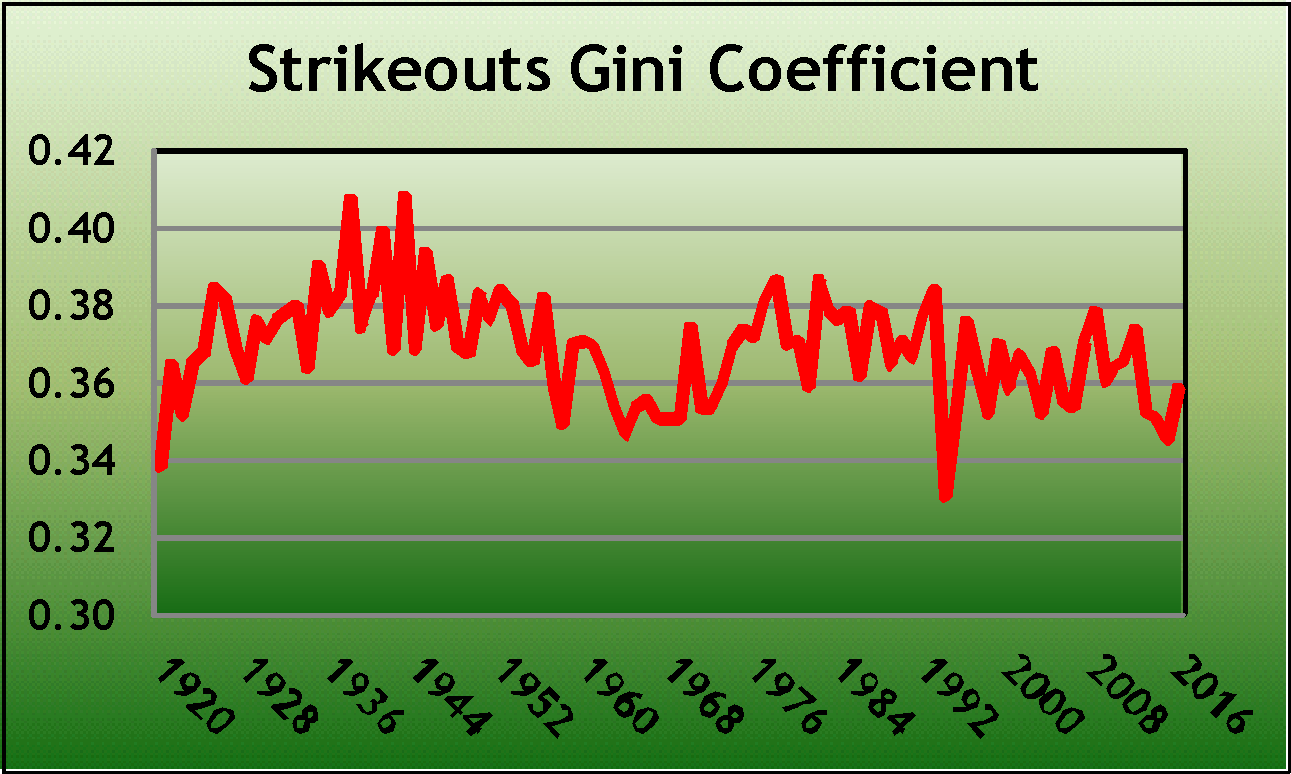 That’s not much of a trend. The distribution of strikeouts has remained pretty constant over the years. And that’s how most metrics worked. Singles? Pretty flat. Doubles? Becoming a little more equal, but at a very slow rate. Walks? Almost no change, year to year. Nothing I found is as dramatic as the increasing equality of home run hitters. Nobody dominates home runs in baseball the way Babe Ruth, Lou Gehrig, and Hack Wilson did in the late 1920s.

But I did find one area in which baseball is becoming less egalitarian rather than more: Speed. Of the traditional baseball stats, the two that correlate best to speed are triples and stolen bases. Yes, we have advanced stats, like BRR, but let’s concentrate on those that fans can see at the ballpark or on TV.

Let’s first look at the stolen bases by elite basestealers—again, I’m defining this as the top n basestealers per year, where n is the number of teams in the majors—as a percentage of all stolen bases. 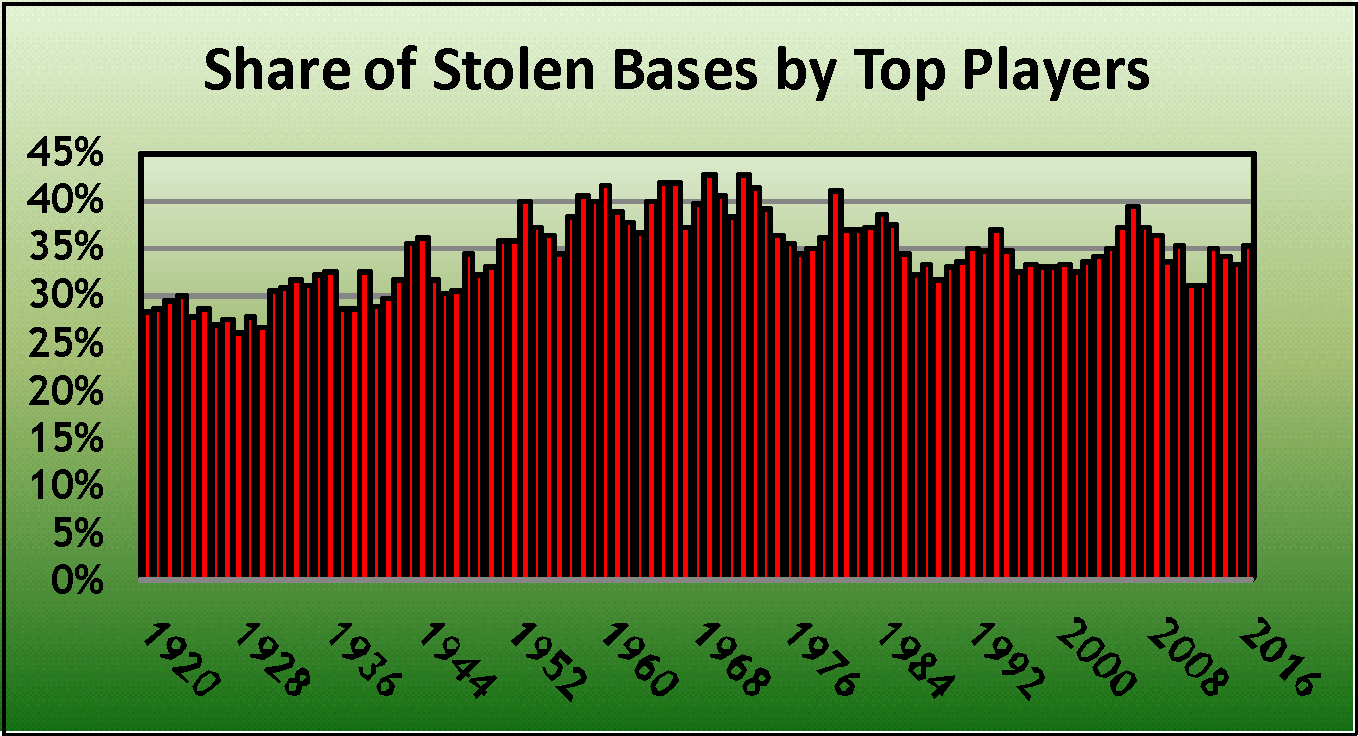 That’s not a straight upward trend, the way the proportion of home runs hit by elite sluggers has been mostly straight down, but the direction is generally upward. Through 1930, the top 16 basestealers accounted for fewer than 30 percent of all stolen bases. The last time that occurred was 1941. That peak, when it topped 40 percent, fell mostly between 1958 and 1973, when stolen bases were in a long-term trough (the only years with fewer than 0.5 stolen bases per team per game were 1930-1972) and a few basestealers (notably Lou Brock, Bert Campaneris, Maury Wills, and Luis Aparicio) were dominant.

The gradual concentration of base stealing among an elite handful of players is reflected in the Gini Coefficient as well. 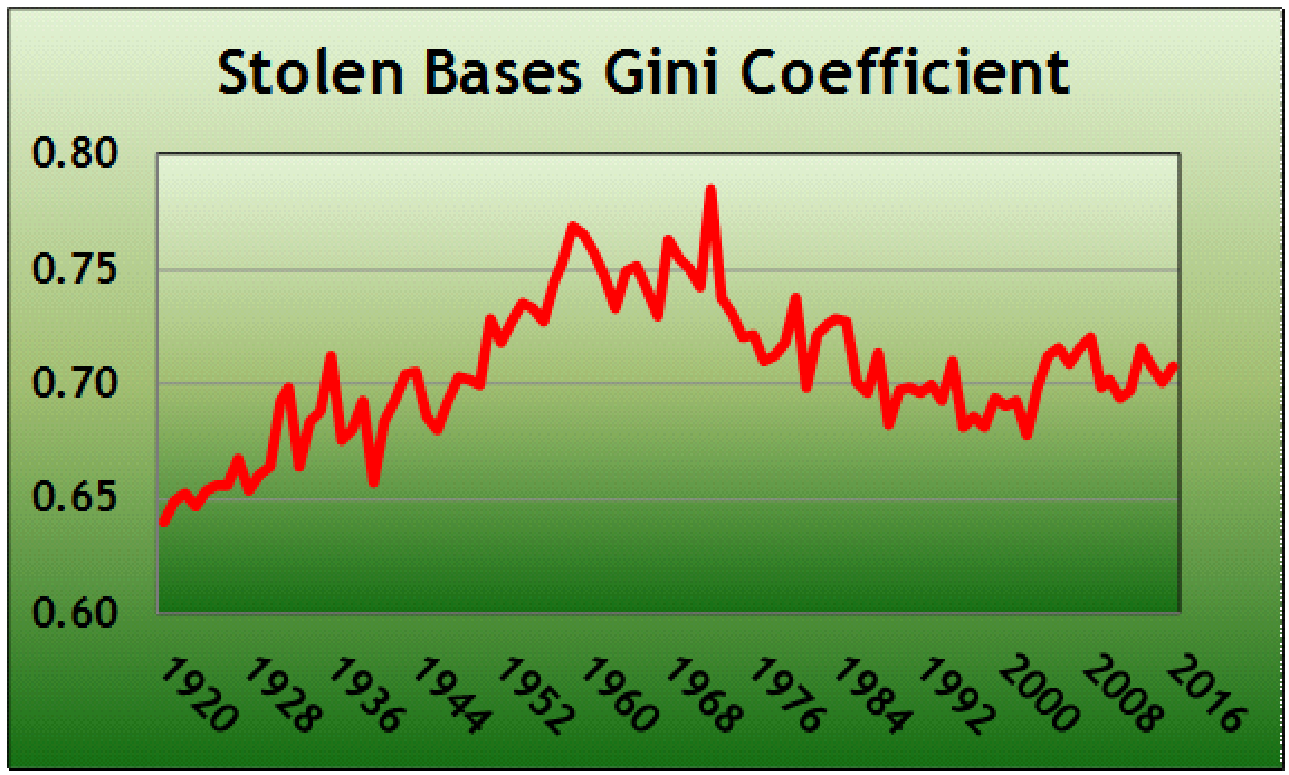 Stolen bases have always been the province of a handful of players; the low-water Gini Coefficient of 0.64 in 1920 isn’t really all that low. But while recent years are more egalitarian than the 1950s-1960s peak of inequality, the general trend is that stolen bases are becoming more unequal, not less.

Why should that be? Well, stolen bases, unlike most batting outcomes, include a measure of discretion. Batters don’t look into the dugout to see if the manager is flashing the “hit a home run” sign. Hitters don’t think that taking a walk isn’t worth the risk if their team’s trailing by four in the late innings. While some base stealers have a permanent green light, most are sent at the discretion of their coaches.

Yet, despite cries that base stealing is lost art (cries that are not something new), and evidence that teams are not attempting steals as often as they should, stolen base attempts are not out of line with historical averages: 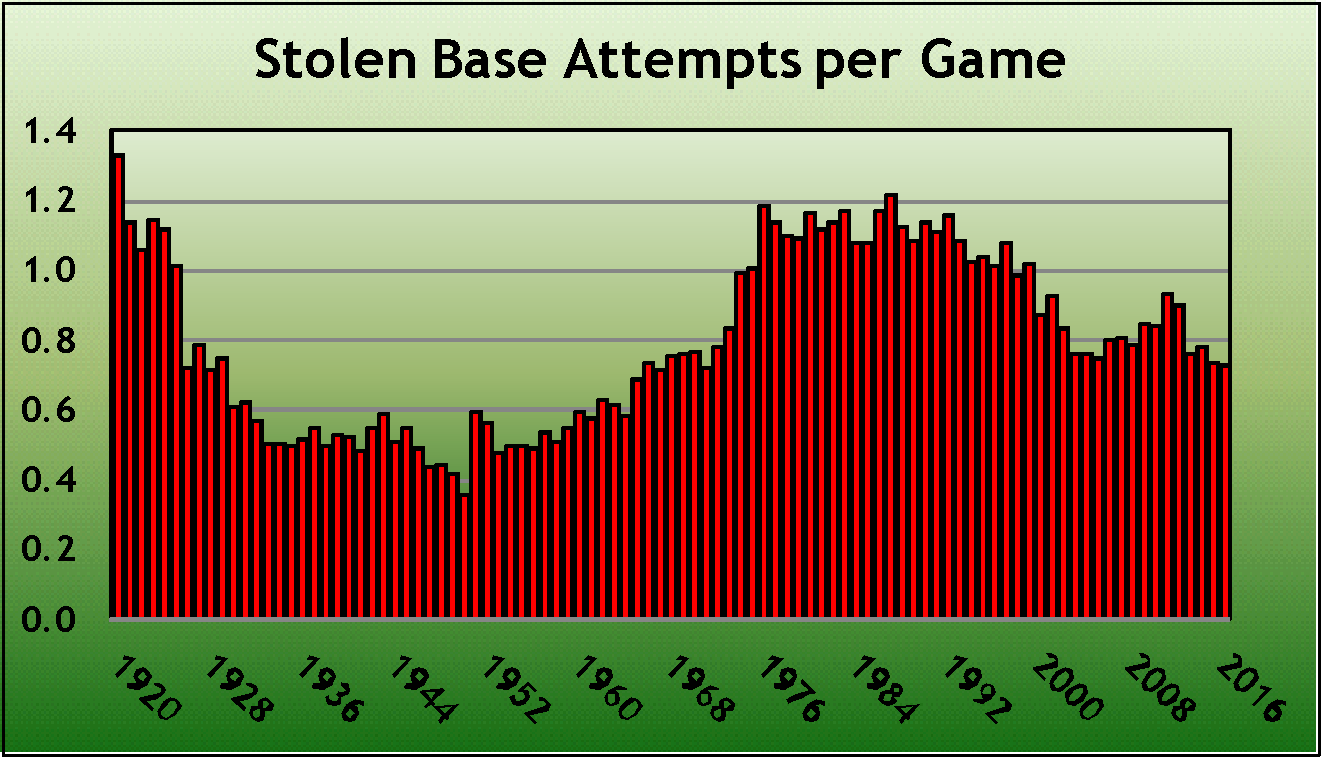 So what’s going on? I think it’s a combination of two factors. First, managers are more aware of run and win expectancies than they were in the past, so they’re less likely to call for a stolen base when they are more likely to result in the loss of a precious out. Here’s a graph of stolen base success rates: 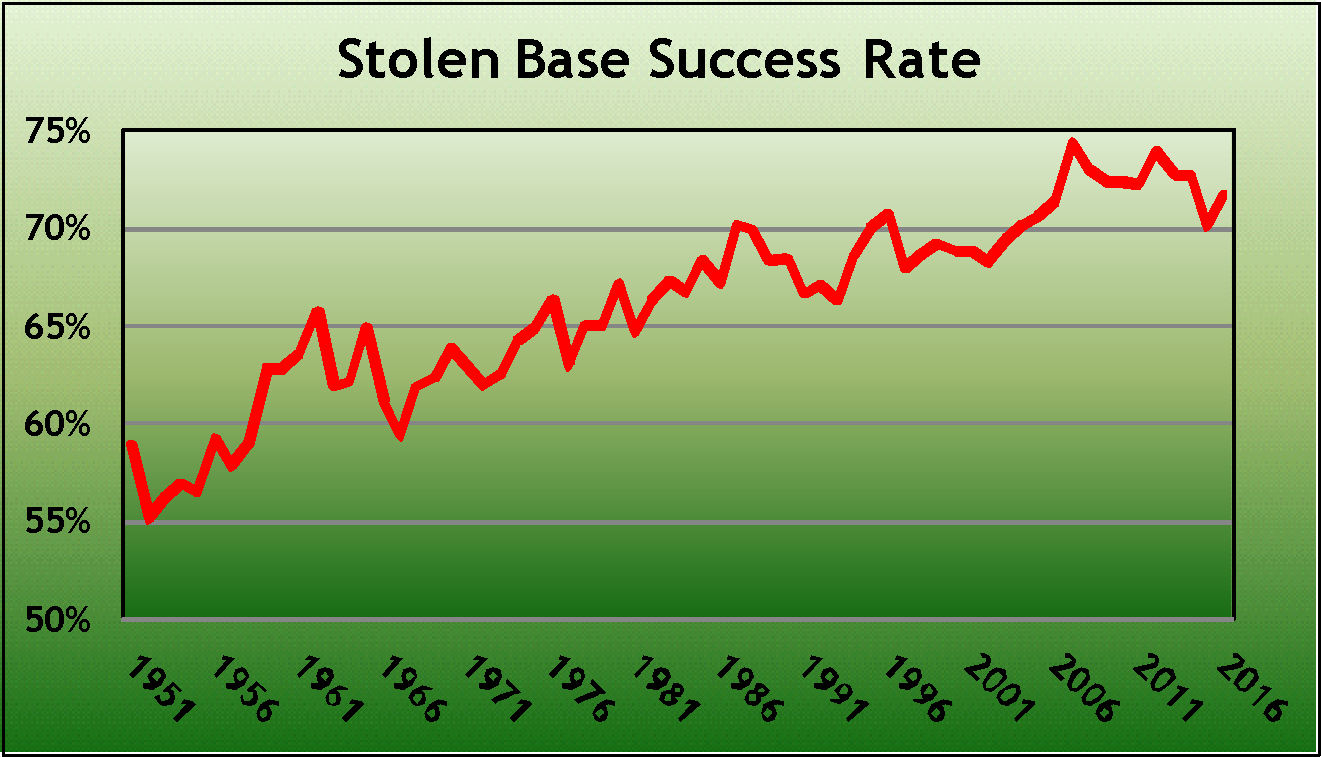 When you’re being judicious in attempting steals, you’re going to concentrate your attempts with your very best base stealers.

The second factor is, again, run and win expectancy tables, but from the point of view of the batter rather than the baserunner. It doesn’t make a lot of sense to send Jonathan Villar when Eric Thames is at the plate, since a dinger will score Villar from first base just as easily as from second base. In a rising run environment, stolen bases are less valuable on the margin—you might as well stay put and wait for someone to drive you in—making their value, again, less appealing for all but the best basestealers.

Triples, though, are another story. Yes, there are situations when a runner doesn’t want to risk stretching a double, but for the most part, triples are the outcome of skill, not choice. And the concentration of triples among the top hitters is indisputable. 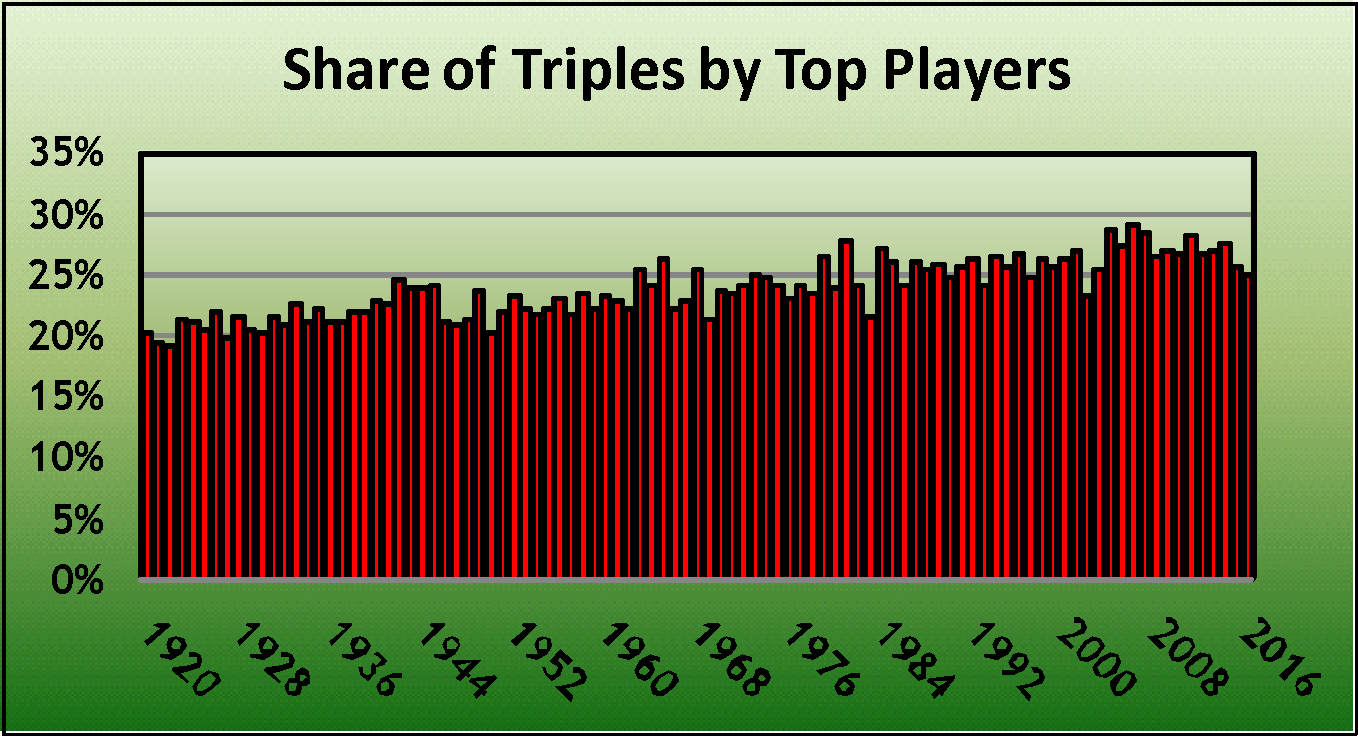 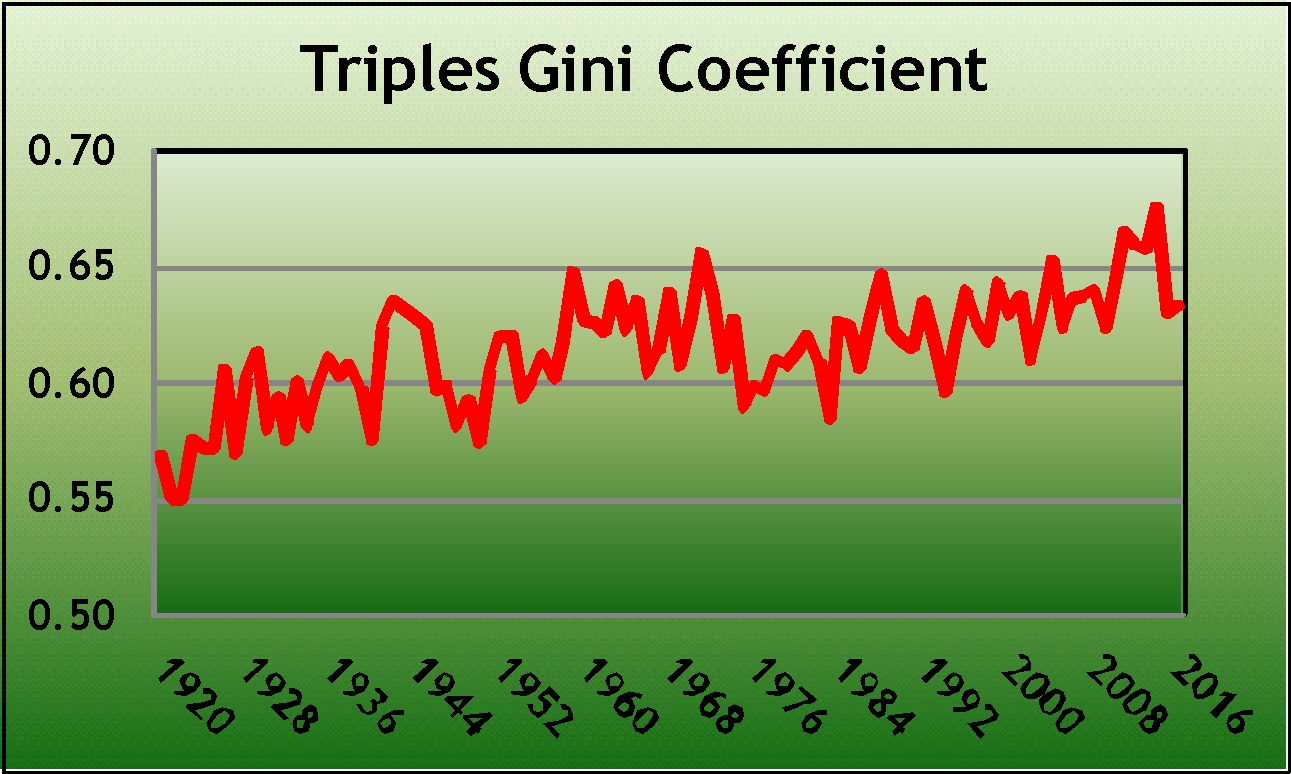 Like stolen bases, this was a pretty concentrated distribution in the first place. But it’s become more concentrated as the years have gone by (even though there have been some incongruous leaders).

Inequality in baseball? There’s not much evidence of it when players have bats in their hands. But once they start running, things become much more stratified. Billy Hamilton, Dee Gordon, and Trea Turner (top three in stolen bases, among league leaders in triples) are in the contemporary baserunning one percent.

Thanks to Rob Arthur for Gini Coefficient consultation.