This week for Baseball Prospectus’ Anatomy of a Scene we caught up with the notoriously tight-lipped American filmmaker David Lynch on the event of his return to the small screen with Showtime’s revival of 1990's television cult-classic Twin Peaks. In what follows, we take a closer look at a scene staged and shot during a recent New York Mets baseball game, a team whose recent string of luck resounds quite closely with the affect produced by the infamous auteur’s terrifying oeuvre.

David Lynch: Well yes thank youuu for having me, it is just spectacular to be here on the baseball prospects website. I have to admit I don’t know much of anything about the sports games, but the truth is I’ve been staging this scene for the past 20 years in preparation for the new show, and I’m quite surprised nobody caught on to me just yet.

This scene you watched here concludes episode eight and depicts a nightmare from poor Special Agent Cooper, still stuck as he is in the Black Lodge. The first thing you will note is the strange man wearing the color orange in the top of the frame: 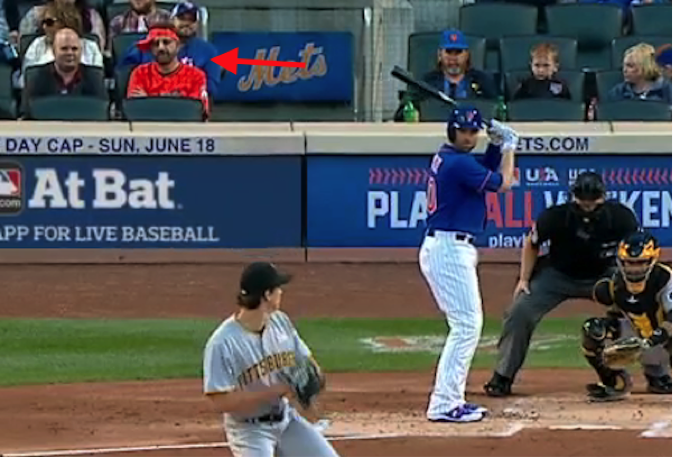 Why is this man wearing all orange? Well, he is the Marlins Man, played by my friend Steven who did catering for me back in the 1990s. I saw him on the set of Lost Highway and I asked him if he had ever acted in a movie, and he said no, and I said, “Perfect! You will be the Marlins Man.” Since then he has been going to all the sports games to prepare for this role, and I couldn’t be more happy with his performance. See, the Marlins Man is possessed by the spirit of the Log Lady, who always knew just what was happening. That’s why he’s always on your tee-vee, watching you. He watches you, and he is in your dreams. 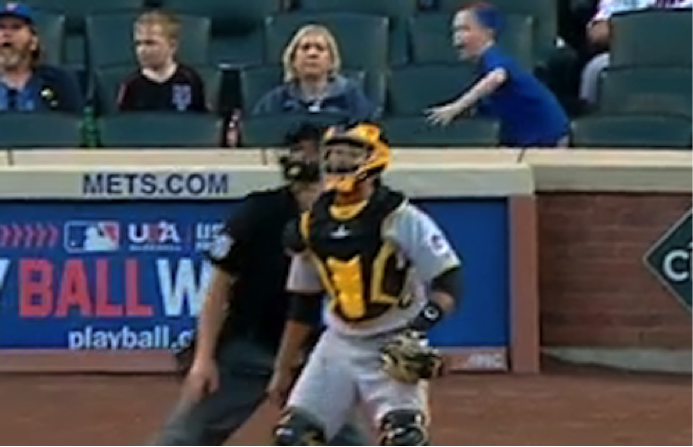 By now, Agent Cooper is very worried about the Marlins Man. So worried, in fact, that he doesn’t notice the strange boy with blue hair crawling over the seats until it’s too late! See, in the real world you would be puzzled seeing a Marlins Man and a boy with blue hair jumping around. But clearly you’ve never seen one of my movies, because otherwise this would seem perfectly normal to you.

Next up, the sports athletes play some more of the game. They are playing the game and then, a giant apple pops out of the ground. 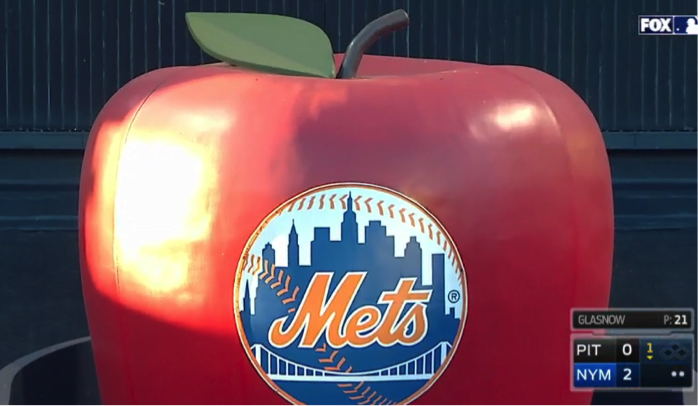 It is a big, beautiful apple, and Agent Cooper is very hungry but he can’t eat it, because it is made out of metal. Also it is 100 feet high. Now, you might ask, what’s a big apple doing in the middle of a game of sports baseball? Well, Agent Cooper isn’t asking that because he’s stuck in that horrible place from where there is seemingly no return. Then, the apple disappears into the ground as if it never popped up in the first place. I think this makes even less sense than Eraserhead, if you ask me, and I’m quite proud it all came out like it did.

After some jazz music plays, Agent Cooper watches the Mets sports athletes win the ball game, and feels like he can finally escape and return back to his original body. But then he looks and sees that the Mets sports athletes have all been replaced by some men from Las Vegas! He starts to scream and he twists and turns in a circle until he winds up in a strange new room. But instead of red curtains and a zig-zag floor, the whole room is green and orange, and an ominous figure peers out from the shadows in the corner of the room. 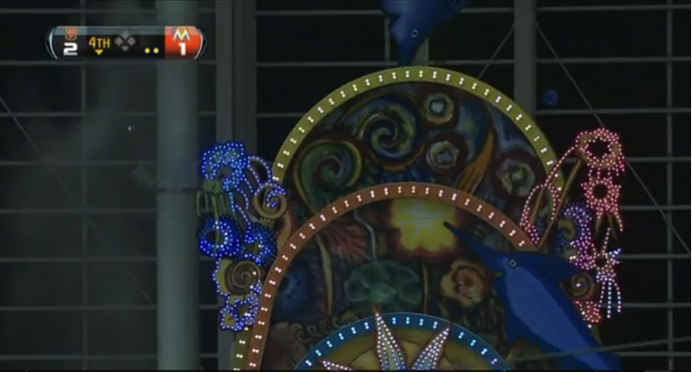 The episode ends after this, and we spend the next five with Agent Cooper as he’s stuck in the hellscape that is the baseball sport games in the 2010s—thanks, of course, to my wonderful set design team that has been planning this whole thing for the past 20 years. I’m excited to share more of my stories with you all, and hope this was just very neat! Goodbye to you all, my friends!

The pitcher reaction GIF is a church with a small but fervent fan base, those who chronicle it on Twitter or Reddit or wherever for other devotees to share. There’s the hopeful skypoint as the pitcher wills the ball to stay in the yard, followed by a slow, embarrassed lowering of the arm. There’s John Lackey muttering a string of curses, a timeless web of invective he seems able to access at will like he’s grabbing hold of the Matrix.

Sometimes there’s the sheer, naked relief of knowing they got away with a bad pitch, like when Zack Greinke, most intense student in the AP Baseball class, left this hanging breaking ball to J.T. Realmuto that Realmuto just missed, and the overwhelming relief wads Greinke up into a little ball on the mound. (Greinke is kind of a master of the pitcher reaction genre, but that’s another story.) Most of the time, though, the reaction is pedestrian: the pitcher turns, watches the ball sail out of the park, hangs his head. But still we watch, sometimes more than watching the path of the ball.

On Saturday, a record seven MLB players hit grand slams, which means we got seven different pitcher reactions. Most of them were of the standard turn-and-look variety, with only Jose Torres of the Padres and Scott Feldman for the Reds betraying much visible emotion or disappointment. Rays right-hander Alex Cobb, however, had the most curious response after giving up this mammoth shot to a struggling Mike Zunino:

I am still trying to interpret this arm wave. Perhaps it’s “go on, get out of here then,” like one might say to a persistent but lovable dog, which is conveniently an apt description of Mike Zunino. Maybe it’s a memento mori, a reminder of how quickly things can come undone in this league: “look on my poorly located splitter, ye mighty, and despair.” Maybe it’s just “aw, brother.” Whatever it is, it’s weird, and somewhat delightful, this little salute. It’s how I hope I would respond, if it were me.

Because I apparently agreed at some point to receive commercial email messages from MLB.com partners and as of yet have been too lazy to unsubscribe, the promotions folder of my inbox had the privilege of receiving an email yesterday afternoon that encouraged me to start a new gifting tradition with Sports Crate. Because I will do quite literally anything to avoid my work, I clicked on it.

New York Mets: The remains of someone’s UCL, padded with broken dreams and crumpled MRI scans. The cushioning is not quite enough to save a Mr. Met bobblehead, whose broken arms rest upon a helpful guidebook to the rotating cast of characters (minor leaguers, third catchers, groundskeepers) who might step into a starting pitching role.

Los Angeles Dodgers: A gilded box holding blank contracts with a blank checkbook, for your very own unlimited sessions of make-believe spending sprees. (Selection of Montblanc pens for appropriately fancy signings to be included in a future month’s crate.)

Kansas City Royals: Will consistently outpace the postal service’s projections for when the package is meant to arrive at your door. (Don’t worry, they’ll eventually match up with what you expect—just after they’ve already beat the system a few times.)

Detroit Tigers: With this crate, you’re not tied down to five months of gifts. This package is a special long-term deal, with boxes that will seem to grow progressively heavier as time passes. Dragging them in from the mailbox each month might make your earlier willingness to pay in and commit feel more burdensome.

You need to be logged in to comment. Login or Subscribe
BrewersTT
I hope Alex Cobb's weird arm swing isn't a reaction to his arm not feeling right during the pitch. It kind of looks like how one might loosen a tight feeling.
Reply to BrewersTT