Phillippe Aumont’s baseball journey has been fraught to say the least, and, after a particularly unsuccessful 2016 attempt to get back to the majors in the White Sox system, he retired in June of that year. Last week, Alexis Brudnicki wrote the news I hadn’t expected but was happy to hear: Aumont is attempting a comeback. The Ottawa Champions of the independent Can-Am League will give him a look when he’s ready to return to the mound.

A player making a return to professional baseball after being out of it for nearly a year—a year in which the overt intent was not to come back—and the inconsistency that plagued Aumont calls for highly tempered expectations. More important, too, is Aumont’s general well-being; it’d be wrong to get greedy when the guy is simply trying to find a satisfying path in life.

But Phillippe Aumont gave me one of my absolute favorite moments in baseball:

There are many merits in this brief clip, but among them is a perfect illustration of the “Horatian platitude”: art should be both pleasing and useful. Roman poet Horace captured the idea in the phrase “dulce et utile,” and by the Enlightenment, it had been neatened into “dux et lux”—sweetness and light.

The clip delights because the pitch utterly clowns Uggla; he turns his back and curls inward, protecting his hands and gargantuan forearms, not to mention his face, as though the ball could do anything, go anywhere, and, indeed, there is a moment when it seems as though it could. But then it thumps into Erik Kratz’s glove, nearly centered and barely above the belt. The comedy is in the yoking of the real and the absurd, the disconnect between the expectation and the outcome.

As for its utility, is it not a clinic on the deceptive power of the curve? And all of pitching is physics: the cantilever of the body—and Aumont’s 6’ 7” frame is a mighty one, but his tools do not lie in brute strength—applies its forces on the ball. They are measurable; the moment is instructive to pitcher and hitter alike.

Dan Uggla ducks, and the viewer lucks into five seconds of pure art.

On Friday, Clayton Kershaw gave up a home run to Domingo Santana. This particular home run had the distinction of being the 11th Kershaw has allowed this season. It was also both the hardest hit and longest home run he’s given up in the Statcast era, with an exit velocity of 110.9 mph and a distance of 443 feet. Kershaw’s been a little home run prone in 2017. Here are the different ways he’s looked after allowing a home run. 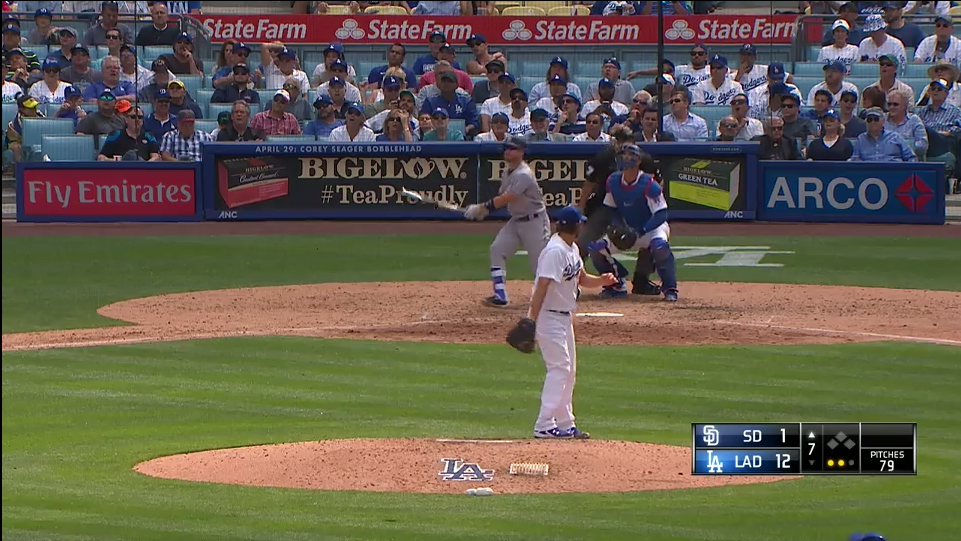 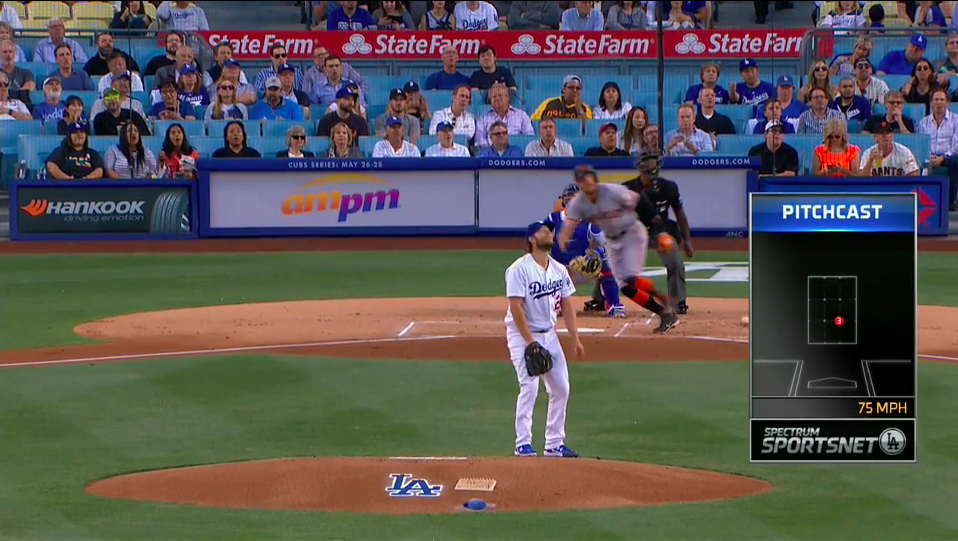 In almost every conceivable way, Clayton Kershaw and my one-year-old niece are completely dissimilar from one another. He’s a grown man; she’s a tiny baby. He’s making $35 million this year; she’s a tiny baby. He’s the best pitcher on the planet; her command of spoons is sometimes shoddy. An aspect they do share: sometimes my sister tells my niece that she has to be all done with snacks, and my niece makes this exact expression. In those moments, she and the best pitcher alive have a lot in common. 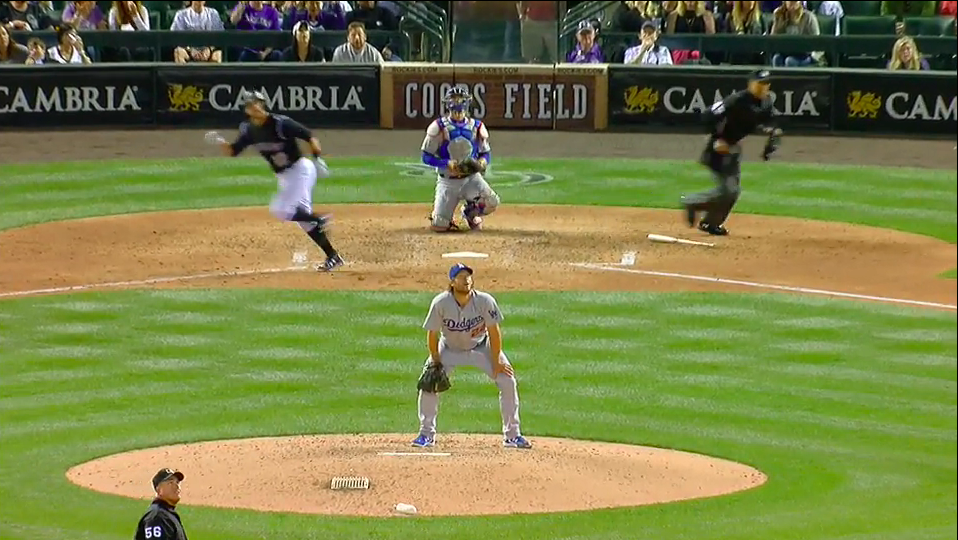 In Coors Field, the home runs hit you.

We often talk about the inability to look away from a car crash; it’s awful and gory, but compelling in a way that reaches something deep and dark within us. Now, imagine being able to watch your own car crash. Isn’t this the face you’d make? 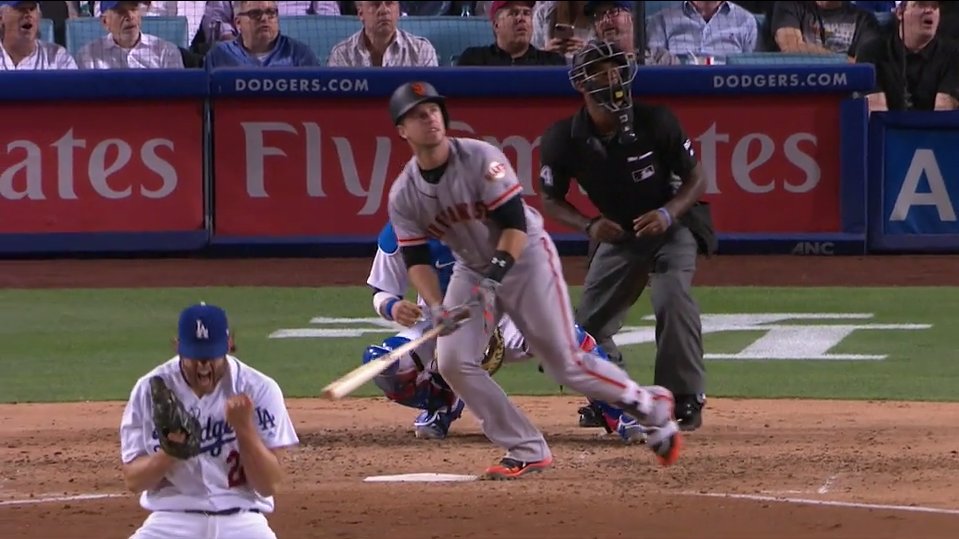 Other events that have inspired this face: The 2016 election; when they re-dubbed My Neighbor Totoro with the Fanning sisters’ voices; tippy bar tables; the spread of preventable diseases; when you’ve stepped on a Lego.

I Don’t Want to Look At the Cubs Fan

The Dodgers are going to win this game. These home runs count, but they don’t matter. It’s fine! But Clayton doesn’t know that yet. Neither does this Cubs fan. 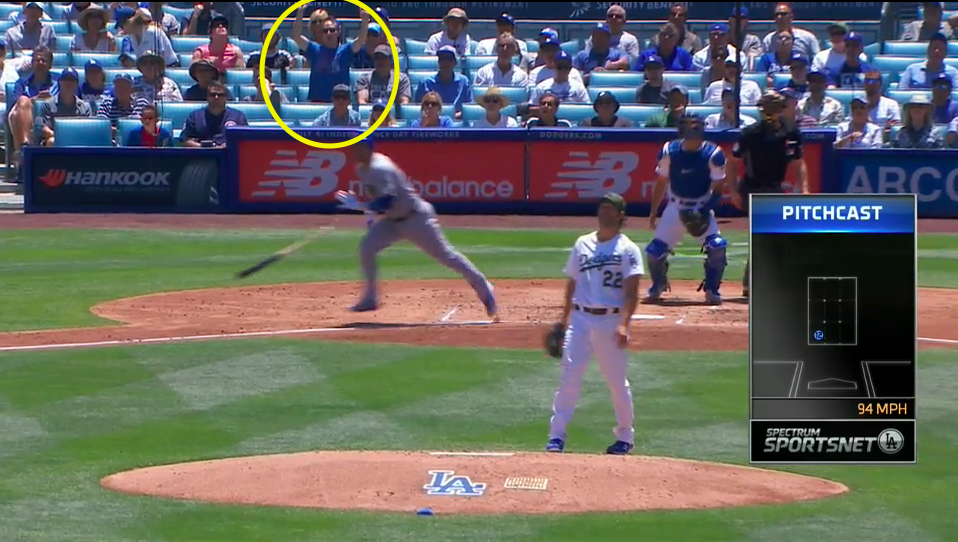 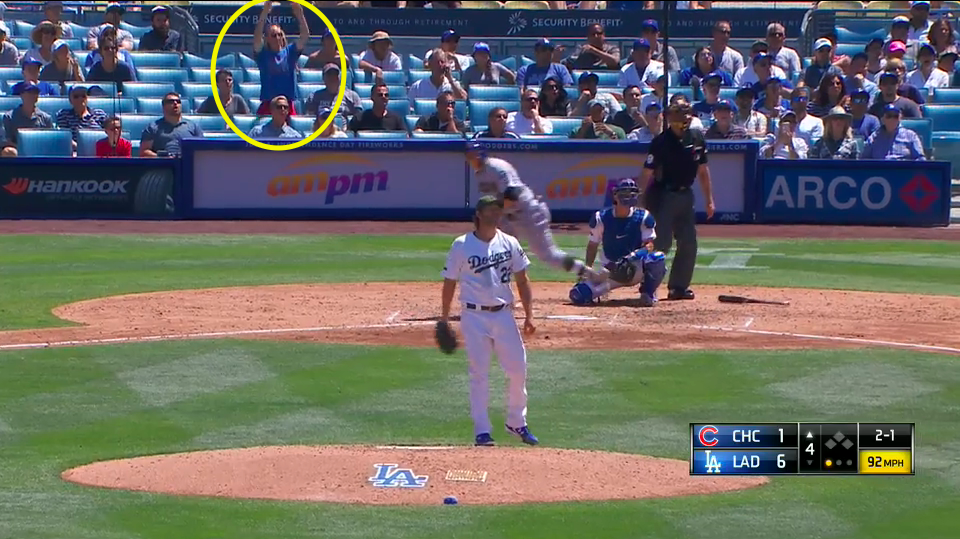 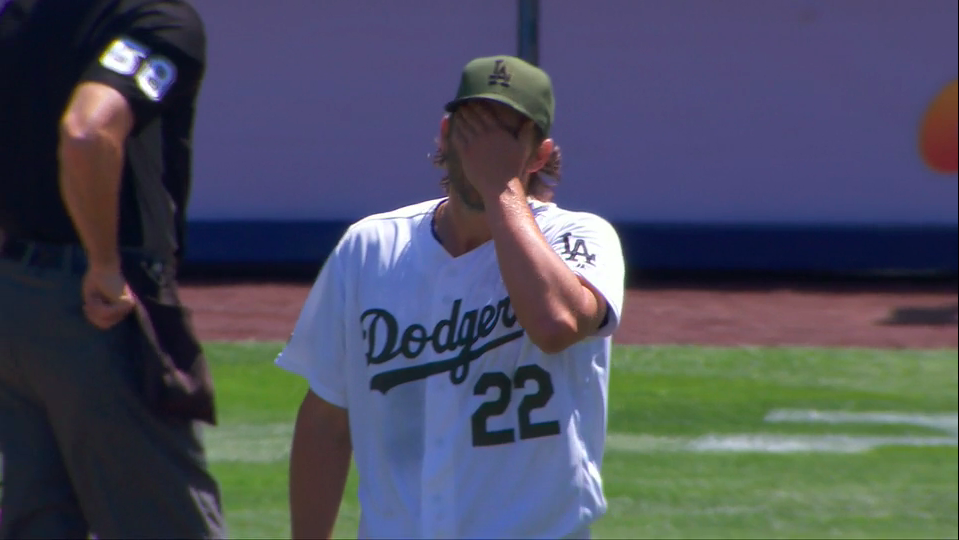 Clayton Kershaw gets to be filmed all the time, while your reactions to accidentally cutting off someone on the freeway are instantly forgotten. Put in exactly those terms, who really has it better?

Recently, we, the internet, were treated to a lovely find from yesteryear in this tweeted-out article from The Village Voice about the ~1986 New York Mets’ favorite dinosaurs. The work was a prototype for Clickhole: a hilarious send-up of what baseball players might say about dinosaurs in a slightly more wacky universe. The article you’re about to read is completely different: there is nothing wacky about this fiction at all. Presenting:

Favorite Alien Conspiracies of the Top-5 Offensive Players in 2017, According to Baseball Prospectus’ BWARP Statistic:

Oh, you thought I’d ask about weather? Heh, someone is assuming a lot about space and the normality of meteorology as we know it.

2. Kris Bryant (3B CHC, 3.08 BWARP): I dunno if it’s a conspiracy but I’m pretty sure Joe Maddon, my skipper, is an alien. I don’t mean it in the bad like, Trump way, or even in the scary Independence Day way. I just mean I’m pretty sure he’s not of this world. I snuck back into the locker room one night because I forgot my hair stuff — we all use hair stuff, it’s the 21st century dude — and I just saw Coach in the back eating crickets. Like, dead crickets, and they were covered in chocolate, but he saw me and offered me some. And I was like “Skip, no, what are you an alien?” And he looked me dead in the eye and said “If I was…would you tell anyone?” And so I stayed quiet to this day.

You’re not gonna publish this, are ya?

3. Charlie Blackmon (OF COL, 2.92 BWARP): Time was you saw an alien, he’d be wearing a colorful hat like the cat in the hat or a jester or some such. At the very least he’d be holding a Magic 8 Ball and looking down on you with those big black eyes and that weird gray head! Nowadays, I don’t know — getting to be so’s a man can’t ask for an alien in a bar without someone asking if he’s looking for a pale white, a Nordic, a reptilian, or what not. Whatever happened to those old psychedelic, stoned aliens? I guess they’re just another victim of the modern age; tempus fugit, my boy, write that down and remember that Charlie gave it to you.

4. Joey Votto (1B CIN, 2.87 BWARP): Okay first off, don’t ask me about aliens without specifying where you’re coming from. You wanna talk Eisenhower signing the treaty that allowed Grays to abduct unsuspecting Americans in exchange for technology like wifi that we take for granted these days? Fine, I can talk Majestic Seven. You wanna talk the evil and good races of aliens that war over the fate of our very planet? Let’s sit down and rap about Reptilians and Planet Nibiru. And you wanna talk about the secret space program or the hollow moon? Buddy, I have some websites for you.

But coming here and just asking my favorite with no sense of polish or precision? I’m not gonna bother with that and frankly, neither should your readers. Learn a thing or two and come back then.

5. Zack Cozart (SS CIN, 2.77 BWARP): So this one time a girl and I were heading out to make-out ridge in high school and we saw this like, bright light? And it got real close and I told her “Oh dang Sheryl, it’s an alien, let’s make out quick before they get us!” And we made out and all, but out of the corner of my eye I saw that really it was just a pair of truck lights, and later Sheryl said the same thing, so I guess it was just the excuse we needed to make the next move.

I guess I don’t have any theories about aliens, when it comes down to it. But I do have some theories about that crazy summer, and how it took a group of friends from boys..to men.