There are many good rules in baseball, but I submit that the best rule is one that we’ve never really seen in action. In the 2017 edition of the Official Baseball Rules (recodified, amended, and adopted by the Professional Baseball Playing Rules Committee via teleconference on January 11, 2017), section (d) of Rule 6.04 on Unsportsmanlike Conduct states:

When a manager, player, coach, or trainer is ejected from a game, he shall leave the field immediately and take no further part in the game. He shall remain in the club house [sic] or change to street clothes and either leave the park or take a seat in the grandstand well removed from the vicinity of his team’s bench or bullpen.

Let’s break this down. When a manager, player, coach, or trainer is ejected from a game, he shall leave the field immediately and take no further part in the game. So far, so good. You’ve seen this before. This is standard get-really-mad-but-can’t-wrestle stuff. Look at Terry Francona, back in 2013.

Oh boy, he’s about to say a bad word and get rung. He threw his gum on the ground! He pulled out that wad of gum and chew and tossed it in the direction of where umpire Andy Fletcher has to do his job when this fracas was over. He’s littering, hoping Andy will step in it. He can’t stay out there after that. It would undo the whole game. It wasn’t quite immediately, but he left the field and didn’t come back. This is familiar.

Let’s look at the next part; the next part is where it gets interesting. He shall remain in the club house (fine, whatever, have a snack) or change to street clothes and either leave the park or take a seat in the grandstand well removed from the vicinity of his team’s bench or bullpen.

I may literally have one hundred questions but I’ll focus on five broad ones.

If a player were to be ejected, could that player change into an officially licensed replica of his jersey and wear that while sulking in the stands? What if he puts a hoodie under his jersey, pulls the hood over his head, and makes a really mad face? What if the jersey he wears isn’t his own, but a teammate’s? Do they have a change of clothes they leave in their locker for this reason, or do they just assume all their t-shirts are family friendly and roll with it? Would you dress up? And would he take his stuff with him and leave for home from there, or go back down to the clubhouse to face the press? Does the press laugh at him?

2) What constitutes a seat that is well removed from the vicinity of a team’s bench or bullpen?

Let’s use Angels Stadium as an example. The home dugout and bullpens are marked: 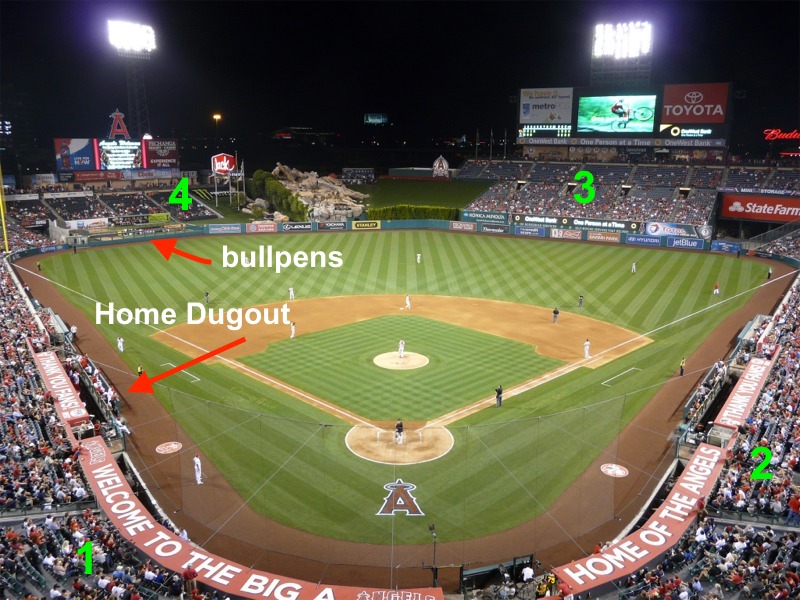 What is the vicinity? Is seating location One sufficiently far from the home dugout? Is that well removed? It would be hard to shout directions to the dugout. Plus the better the seats, the more likely you are to be in the sight line of the center field camera. And you might plausibly communicate with hitters in the on-deck circle, who could relay your messages to the dugout. One is probably too close.

Two and Three seem obviously fine; Two is close to the opponents' dugout, so no help there, and Three is on Mars. The upper deck would be OK, though you'd look particularly sad up there. You're an important guy, man. Have some self-respect. Would Four work, provided you’re in a high enough row that you can't talk to your relievers? Perhaps. It may seem silly, but absent a clear directive to the contrary, “well removed” could come to be in the vicinity of almost anywhere.

3) How well prepared are folks for this situation?

Does each manager, player, coach, and trainer have a ticketed seat every night specifically designated for this purpose? They have tickets most nights, but do they hold one out special in the event that they become very mad at work and can’t sit with their coworkers while they do their jobs? You can’t very well give tickets to your mom, wife, and two kids, only to come over in the sixth inning and say you need one back. Or would they have a clubhouse attendant run out to the box office and buy a cheap seat?

Presumably ballpark staff would recognize Bryce Harper or Joe Maddon, but what if they didn’t? Think about how hard it is to recognize major leaguers outside of the context of baseball, and they wouldn’t be looking for them. They're supposed to be working, too. What if Scott Servais got ejected, and a half-inning later, I came back from the bathroom to find him in my seat? Do I ask the ushers to move him? And would they?

4) What do they do once they get there?

I assume you buy a hot dog and a beer. You talk to no one. We so often have things in our hands when watching baseball; food, drinks, our phones. You need to do something with your hands. A manager using a phone in this scenario seems dangerous. You might try to text someone you shouldn’t. Even if you weren’t trying to do that, we would assume you were up to mischief. No, a phone is dangerous. You don't want to use one of those fidget spinner deals; you're not a youth. Reading would escalate the situation unnecessarily. No, better a hot dog and a beer. Keep it simple.

5) How long would it take to regret the decision to leave the clubhouse?

But then what? You sit down and it hits you. You don’t belong up here. You’re sitting in the stands. And everyone is watching you. The broadcast camera is going to cut to you uncomfortably often, because you know it would find you. There are going to be screen grabs of you all over the internet; fans will come by to take pictures of and with you. You are going to have to think about every single facial expression you make from the moment you sit down until the end of the game. Do you want to be stoic? Grumpy? Jovial? What a time we had! You can only have one beer, and you’re going to want more than one. You better not put anything weird on that hot dog. You’ve spent your entire professional life on camera, but you have never, ever been more self-conscious than you are now. You’re completely ill-equipped.

I think that’s why we’ve never seen this in action. Managers talk big game about standing up for their guys and giving the umps what for, but on some level, they have to know how silly they look. They make a lot of money to make important decisions on behalf of other grown men, and they’re out there throwing their gum around. It’s just embarrassing enough that in the moment right after, in the let down of that feeling, when the adrenaline wears off, and you think “Oh crap,” you’d rather not have someone watch you eat a hot dog. Even while wearing street clothes.

https://www.youtube.com/watch?v=ok6pLKBD-XQ
Reply to tearecrules
jfranco77
How long would a manager be suspended if he went and sat in the stands, then heckled the umpire from there?
Reply to jfranco77
BrewersTT
The umpire would require him to leave the Standard Metropolitan Statistical Area, and submit to an ankle monitor.
Reply to BrewersTT
jefffish11
Is this the first Joni Mitchell reference ever on BP?
Reply to jefffish11