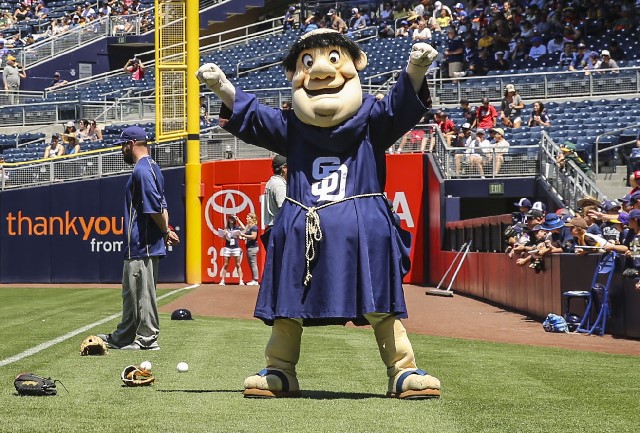 (SAN DIEGO, CA) — In what has proven to be a difficult week for people who don the felt, 27-year-old Jake Yarborough was removed by the San Diego Padres this morning from his position as Swinging Friar. This comes off the heels of another high-profile mascot malfunction just yesterday, as a man wearing the Mr. Met costume was filmed making an obscene gesture at fans.

This time the action that led to the decision was more obscure. According to one Padres official: “The mascot in question is not being punished for any specific action. Jake just… he just makes people sad. It’s really unfortunate. Mascots are this strange vestigial tail of baseball; they’re silent, and creepy, and their faces are frozen… and I just don’t know how people accept them. But they do, and, well… he just wasn’t doing whatever it is he was supposed to do out there.”

Yarborough has worked as Alternate Swinging Friar, working Sunday day games and the occasional night game, since the beginning of the 2016 season. Because of that, it took a while for the team to understand the full effects of his work. Fans began leaving early, sometimes in the fifth or sixth inning. The wave stopped happening. But it was when several fans were struck by foul fly balls they failed to bother to reach up and catch, that the organization knew it had a bigger problem.

“I don’t know, man,” noted local superfan Chad Thorburn commented. “I mean, you can’t change the Friar’s smile, can you? It’s a mask. It’s just how it’s, like, made, man. But you know… somehow he made that smile sad, somehow. Discomforting. Like he knew something you were about to know.”

Thorburn’s wife, Charlene, added: “It’s like one of those, what do you call it? Sphinxes. Where, like, it looks you in the eye and you turn to stone. Except with Jake… you made eye contact and you… felt like you were a Padres fan. Like, all at once.”

The Padres have confirmed that Yarborough is being transferred, not dismissed, and that he remains a valuable asset to the organization. When asked about his new role, Yarborough replied: “They haven’t decided yet. Hopefully something in accounting.”

Earlier this week, Paul DeJong debuted for the St. Louis Cardinals. A solid hitting prospect with positional versatility, DeJong filled an immediate need as Kolten Wong hit the DL, and he fits the Cardinals’ mold of hitters very well. Greg Holland must have been surprised, though, as DeJong swatted a fastball into the left-center field bleachers in the ninth inning of the Cardinals-Rockies bout at Coors Field, a home run in his first at-bat. Since, DeJong has added two doubles and a single, an impressive first week in the majors for a 23-year-old.

DeJong was briefly my high school teammate, and, although we were barely acquaintances, I find myself invested in his success. On the basest level, watching someone with whom you have shared a baseball diamond hit a home run in his first appearance is incredibly cool. On a more pensive level, such a development hurls into sharp relief the razor-thin margins between success and failure, and the chasmic difference in work ethic and preparation that impute meaning unto those margins. 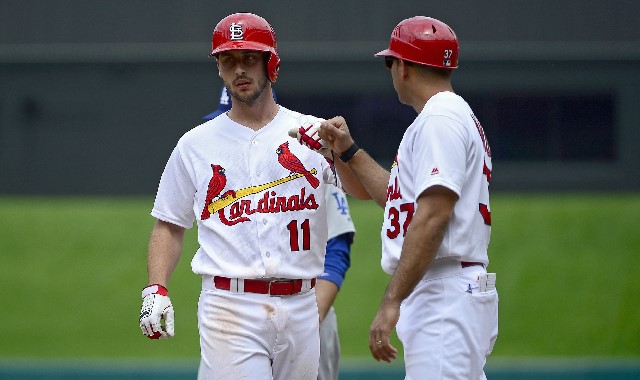 We meditate often on failure here at Short Relief. Perhaps we are conditioned by the unforgiving nature of writing: tight deadlines, meager pay, publicly harsh critics. But the athlete fails or succeeds on a grander scale. The great hitter who famously succeeds only three of ten tries reaps glory. The banjo hitter who slaps two singles every ten at-bats toils in the knowledge of their past successes and current failures. Those who observe know, too, some of the breaks that impel a player to a higher level, and possess a morbid knowledge of their own shortcomings.

That which alienates the poets and their subjects begins as a subtle divergence, the difference between a player who struggles and goes home versus one who struggles and commits oneself to betterment. It’s part of what makes David Foster Wallace rhapsodize about the classical beauty of Roger Federer’s performance, what compels C.L.R. James to contemplate cricket as an art. What draws you close to them—your shared love of a game, your youth and adolescence on the same playing fields as those who go on to star for the St. Louis Cardinals—forces a confrontation with the causes of your own failure, and through that one might find beauty. Or, at least, peace of mind.