We’d all like to think that we learn as we go along. Certainly, we are better and more efficient at unlocking our front door than the day we moved in, right? We must be better at making our coffee just right. At this point, we should be able to tie our shoes from a comatose state.

If we, speaking hypothetically, were the type of folk who frequent Las Vegas and the many establishments for which it is internationally renowned, we would hope to continually, perennially increase our prowess, or at least better wield what skills we do possess.

Skills. Games of chance basically exist to prop up our confidence in “skill” while whacking away at the root of its reality with a machete. It’s how they make money. And it’s how baseball sometimes comes for our early-season darlings. (Or for our oh-so-promising fantasy teams. Don’t gamble, kids.)

Every season, though, we step off the plane and the desert air—devoid of history or box scores, populated only by zeros and alphabetically sorted names—reinvigorates our sense of hope and self-reliance. Every season, we walk to the tables and meet those guys. Tyler Flowers, they might be named. Or Alex Avila. Or that other guy who’s shorter but also has a beard. What’s that guy’s name, again? Oh, Sandy Leon.

Fine fellows, all. Veterans of this terrible but addictive mind game, like us. Flowers and Avila, man. They’ve really got it going this time. Learning! It’s possible! Just like Leon did last season, good to see. He really figured it out—and, well, he’s not running so hot this time. But it’ll turn around. It always does, right?

Here’s the same, but from the 2016 season (minimum 250 plate appearances this time): Tyler Naquin, Sandy Leon, Trea Turner, DJ LeMahieu, Cameron Maybin. (Flowers, we should note, also pops up at 16th on this latter list.)

BABIP holds a strange place in the minds that provide it any quarter at all. Once accepted, it becomes a sort of multi-purpose grounding force. You shouldn’t try to fly. You shouldn’t jump. That assurance, by turns salve or omen, still comes mostly from the idea of luck.

There was a time when BABIP was treated as a numerical measurement of luck, just waiting to regress to something like league average and bring weirdness back into line. Luck’s actual role in the number has been whittled down by more advanced metrics, by our knowledge of defense and recognition of patterns over larger and larger datasets. We know it to be a smaller piece of the equation now, but it somehow seems more nebulous for its indeterminate role. Now we don’t just watch regression as expected. We must wait to see how much of our supposedly legitimate gains might vanish with yesterday’s winnings.

The information that has annexed some of that space once thought to be filled by chance: Does it help explain the elite-BABIP catchers?

Maybe. We legitimately know more in this arena nowadays. Statcast provides a good many things, but one of the most helpful things is a less categorical, more objective cataloging of batted balls. We can go beyond the information that Flowers, for instance, shaved his ground-ball rate during his season-plus tenure in Atlanta, and instead point out that he’s narrowing the range of trajectories on the balls he puts in play—possibly as a function of narrowing the types of pitches he swings at.

See, Flowers is changing, just like virtually every hitter, all the time. He opened his stance a bit and added a more pronounced, more frequent leg kick. He ends up lower at contact, and appears to be doing less of the work with his upper body.

Through some combination of a vastly reduced chase rate and an opposite field-focused two-strike approach, his swinging-strike rate is improving so much (from 40-homer-hitter-only territory to roundabout Evan Longoria) that he actually looks the part of a contact hitter instead of an overmatched slugger in training.

Altogether, the information allows us to broaden our understanding of what Flowers is doing beyond the (still unsustainable) .442 BABIP or the excellent 30 percent line-drive rate. Take 2015 against 2016 against 2017 so far. It’s obvious.

That means, admittedly, that the quintessential Flowers hit is a single. If you require evidence of this claim, just know that since the start of 2016, Flowers has ripped, bopped, or doinked 113 hits. Of those, 11 fell on the opposite side of the fence from where he was standing, so he got to trot leisurely around until he reached home again. Of the other 102, he’s managed to claim second base just 21 times.

Still, not long ago, we would have discounted Flowers’ BABIP abilities even more severely based on his foot speed. And there’s a good chance we would have been wrong, or at least misguided. His career BABIP is an above-average .330—possibly because of an ability to hit the ball extremely hard that we’ve only recently begun accounting for. In 2016, his 93.3 mph average exit velocity ranked fourth among hitters who put at least 150 balls in play.

This year, the out-of-nowhere name near the top of that same leaderboard is Avila—backup catcher and general manager’s son turned linchpin of the Tigers' offense. For his part, he shares Flowers’ above-average career BABIP. But it hasn’t much mattered thus far in his career. In 2014 and 2016, he hit for the two lowest batting averages any active player has posted in a 200+ PA campaign with a BABIP of .320 or better.

Always a patient hitter, Avila has taken selectivity to the extreme—swinging less often than any major leaguer save Logan Forsythe and Brett Gardner. Whether he subscribes to the fly-ball revolution or simply tweaked something to go all-in more often, Avila is crushing the ball. 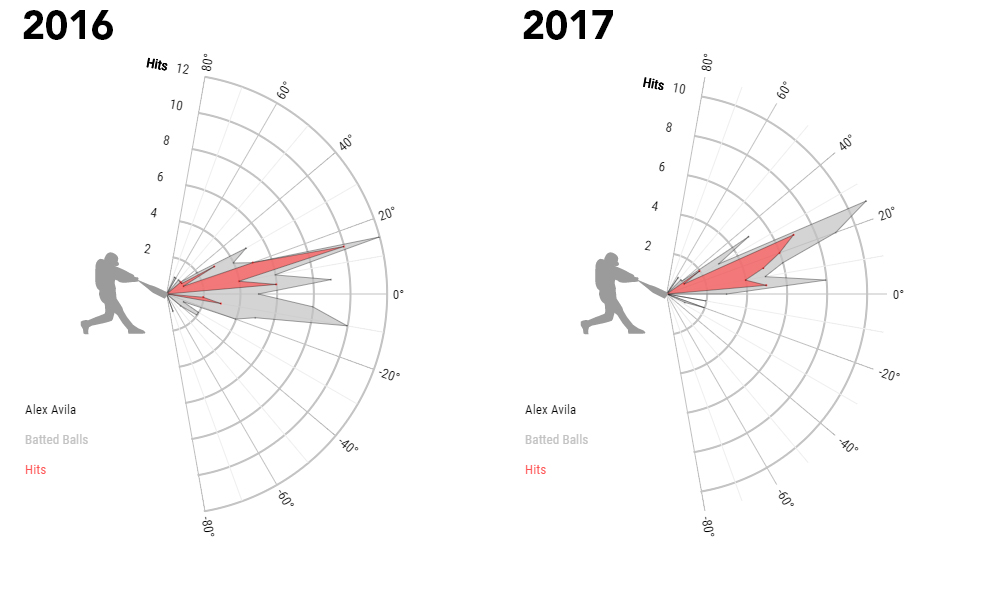 Problem is, he’s still whiffing on about 34 percent of the swings he takes. It puts him near the top of another, less favorable list, but one that also features Miguel Sano (current BABIP leader).

Of course, Sano is a known high-roller, so to speak. This is his highly touted game. Avila showed up with no fanfare, and little to lose. Now eyes are beginning to turn toward him as the winnings pile up. What we have always seen as the crashing wave of regression, the return service of that hot streak, surely had some of those things in there. But those waves also came from the house—from everyone noticing, adjusting, scheming in response to success.

And then the magic ran out. With a .247 BABIP thus far in 2017, his is one story—the painful, gravitational course correction—that could terrify, or motivate, someone like Avila.

Quit while you’re ahead.

Ah, yes. Our central metaphor breaks down rapidly when we try to muster sage advice for Flowers or Avila. Or Leon, for that matter. This dollop of wisdom—frequently offered to deaf ears, anyhow—is even less useful in our context, for, as you may have heard, it runs counter to one of baseball’s most basic tenets.

More importantly, it is utterly impossible to imagine a ballplayer thinking this way. It’s why it was already so difficult to come up with anything substantive to tell a player about his BABIP. Aside from some half-joking superstitions, most players probably don’t see much of any of their performance as luck—good or bad. Some of them surely place value in hitting a deep fly ball that happens to be caught, but if that less-than-ideal outcome occurred 80 or 85 percent of the time, how long would they go before changing things?

They reached whatever point they have reached by adapting, and beating long odds. The receding levels of luck we see when we watch the game are a product of our increased information reserves, yes, but they’re also a reflection of the constant, churning changes afoot in every player. Some will work, some will very much not.

Yes, some players and some seasons—like Leon and his bonanza, most likely—are less explicable than others. Luck and weirdness and fortune shifts on a nearly cosmic scale are as present in baseball as they are off the diamond.

But for all the drama BABIP’s huge swings bring to our world, we needn’t mourn its partial demystification, or ride too high on our newfound knowledge. We should probably just appreciate how much more we can see. Chance will always have its place in the game, but wouldn’t it be more fun to watch a collision of a thousand games of strategy?