Don’t be fooled by the 3.91 ERA—Sean Manaea has been money for the Athletics this season. After beginning the season with two rough outings, the young southpaw has a 2.92 ERA over seven starts, striking out 40 batters in 37 innings. The 25-year-old has lived up to the hype following an impressive rookie season, and Wednesday’s performance against the reigning American League champs only reinforced this.

Manaea went seven strong innings, striking out seven and allowing just one run on three hits and a walk. While Manaea’s key to success this season has been a nasty slider that has the second-best whiff rate in baseball (topped only by Max Scherzer’s slider), he interestingly leaned away from it in this outing and instead recorded an impressive eight swing-and-misses on his changeup. Manaea generally uses both pitches equally, but he went to the change nearly twice as often in this outing and it paid off. 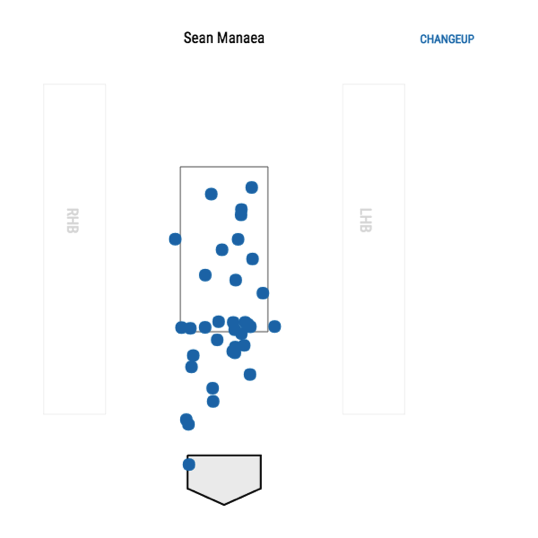 If Manaea can consistently generate whiffs with the changeup, he may have a deadly pair of weapons in his arsenal to pair with a heavy fastball (second-most drop among starters this season). That sounds like an awfully good pitcher.

The rookie second baseman has quite the line to start this season, now hitting .286/.357/.698 with seven home runs in just 63 at-bats. The current power output is obviously unsustainable, but there could be more pop in this bat than previously projected. Pinder’s exit velocity is ninth-best in baseball (small sample size warning) and he’s been hitting a ton of fly balls.

While he probably isn’t the second coming of Josh Donaldson at the plate, Pinder hit pretty well through the minor leagues and big-league pitching hasn’t stopped him yet. Although Pinder may be pressed for playing time in the future with Marcus Semien manning shortstop (when healthy) and Franklin Barreto waiting at Triple-A, he could force his way into at-bats if he continues to hit.

The hottest team in baseball has to be the Astros, whose scorching offense has been laid waste to the Twins. Their 40 runs scored during this week’s three-game set in Minnesota is the highest total ever by the Astros, a mark reached in large part by an impressive showing of firepower that somehow upstaged Monday’s 11-run eighth inning.

In this showing, five Houston batters went deep: George Springer, Carlos Correa, Alex Bregman, Evan Gattis, and Marwin Gonzalez. But despite the excellent all-around showing, it wasn’t hard to pick out the MVP at the plate; Springer had himself a huge day, going deep twice and finishing 4-for-4 with two walks.

Springer’s first dinger got out in a hurry, leaving the park in all of 3.7 seconds …

… but his second round-tripper was far more majestic:

That blast was nearly a triple-decker, traveling an eye-opening 473 feet before coming to a rest in the center field bleachers. Springer’s solo shot was the longest by an Astro in the Statcast era, and he now leads the team in home runs.

Interestingly, second to Springer on the club is Gonzalez, who is just one home run away from his 2016 total and has more than doubled last year’s wRC+ in a quiet but impressive breakout season.

Most abnormally long baseball games are a product of either a rain delay or extra innings, and when you combine the two you get something like the six-plus-hour marathon played by the Pirates and Diamondbacks on Wednesday. Interrupted by an hour-and-a-half delay following the 11th inning, the two teams traded blows all the way until the 14th frame.

The Diamondbacks initially carried a 4-3 lead going into the bottom of the ninth inning, but the score was tied up when Alen Hanson scored during a Jordy Mercer-induced double play off the struggling Fernando Rodney.

Arizona struck back in the top of the 11th, when Nick Ahmed went deep for a solo home run:

But Mercer matched that half an inning later, muscling out a dinger of his own to once again tie the game up.

Finally, Chris Owings put the D’Backs up in the top of the 14th by singling in David Peralta, and T.J. McFarland managed shut down the Pirates to give the team a hard-fought win.

Played in a crisp two hours and 19 minutes, Wednesday’s showdown between the Dodgers and Cardinals was one of the best games of the day. The Cardinals took a one-run lead in the second inning with an RBI double off Hyun-jin Ryu, though it would be the only runs he allowed on the day. The lefty was otherwise spotless, throwing six innings of ball with just one run allowed on three hits and a walk, along with four strikeouts.

Pitching for the Cardinals was Carlos Martinez, who dominated through eight innings. C-Mart allowed just one run on four hits and three walks, striking out nine and bringing high-octane gas throughout the entire game.

Take a look at how well Martinez carried velocity deep into the outing, even hitting 99.8 mph in the eighth inning.

The game remained tied at 1-1 until the bottom of the eighth, when Dexter Fowler stepped to the plate and delivered a go-ahead solo shot to give the Cardinals the lead and, eventually, the win.

As good as Carlos Martinez was in St. Louis’ win, the best pitching performance of the day came from Max Scherzer, who shut down the Giants over nine innings of dominance. Allowing just one run on five hits in the complete game, Scherzer struck out 11 with no walks.

Here’s how good Scherzer’s been this season: his 11-strikeout showing actually decreased his K/9 on the season, which currently sits at 11.7. It’s terrifying to say, but even after winning the Cy Young last year for the second time, this may be Mad Max’s best season yet.

James "Big Maple" Paxton made his triumphant return to the Mariners on Wednesday after missing nearly a month with a forearm strain. Paxton didn’t miss a beat, throwing 5 1/3 shutout innings on just 74 pitches, striking out six and allowing all of three hits and zero walks. Paxton now has a 1.26 ERA on the season and has been blowing away hitters all year with a fastball that averaged 96.6 mph in his first start off the disabled list. The opposition has been little challenge for the big southpaw, and it instead looks like his biggest test this season will be health. If Paxton can stay on the mound, we could be looking at a hurler worthy of replacing King Felix at the top of the Mariners’ rotation.

While I could ramble on about how poorly the Mets have been playing, how even Jacob deGrom can’t prevent them from being blown out by the Brewers, how they’ve fallen to 23-28, and how Citi Field was probably built on an ancient burial ground, I have a better solution. Sit back, relax, and enjoy a metaphor unfold in video form:

Play of the Day

Wednesday was a better day for offense than defense, but that doesn’t mean we were without some excellent plays in the field. The best of all probably belongs to Lucas Duda, who went full extension to rob Jesus Aguilar of an extra-base hit.

What to Watch Thursday

Unfortunately, Thursday doesn’t exactly have a packed slate of action. With just eight games being played, it will be slim pickings, though there’s certainly a few matchups worth keeping an eye on. To start, Corey Kluber will make his return from the disabled list against the Athletics, looking to get his season back on track.

In New York, Zach Wheeler will look to continue his solid start to this season against the hot Brewers, while the Yankees will head up to Toronto and face the streaking Jays and Marco Estrada. In other AL East news, the Red Sox and Orioles will battle in Baltimore, with Eduardo Rodriguez throwing against Wade Miley.

Brandon McCarthy and Adam Wainwright will face off in St. Louis in what should be a solid game, and other noteworthy arms are Zack Greinke versus the Marlins and, uh, that’s about it.

You need to be logged in to comment. Login or Subscribe
TGT969
Robbie Ray's game vs Ivan Nova on Tuesday (3-0 Arizona) was even better
than Martinez: 2 hours 10 minutes!
Reply to TGT969
tearecrules
Watching the Twins bullpen that series felt like watching post-meltdown Rick Ankiel pitch; just cringing as you see professionals who cannot stop the bleeding. I've watched a lot of baseball over the past nearly 40 years, but I am having a hard time recalling a team pummel a series of pitchers that badly for multiple games. I know it's happened before but I didn't see it or don't remember it.
Reply to tearecrules