On Thursday, May 11, there were only 11 games scheduled, and one of them, Baltimore at Washington, was rained out. Two of the remaining 10 games had notable endings.

This is how the Astros-Yankees game ended in New York that evening:

A few hours later, in Phoenix, the Pirates broke up Zack Greinke’s no-hitter with a Gregory Polanco home run in the eighth, but the game ended like this in the ninth:

Sabermetrics has given us several fun acronyms. If Christina Kahrl received royalty payments every time someone mentions Three True Outcomes, a term she coined, well, she’d have more money than she does today. Speaking of royalties, the backlash to WAR as an evaluative tool has probably generated payments for Edwin Starr’s estate. Minor league expert John Sickels gave us LOOGY. And Cubs blogger Tony Jewell, attempting to describe the baserunning exploits of Ryan Theriot in 2008, came up with TOOTBLAN.

TOOTBLAN, for the uninitiated, stands for Thrown Out On The Basepaths Like A Nincompoop. It actually was part of a more elegant formula Jewell derived, the Ryan Theriot Adjusted On-Base Percentage (RTAOBP), defined as

Ryan The Riot’s last year in the majors was 2012. The RTAOBP ended with him. TOOTBLANs live on.

Defining a TOOTBLAN is discretionary. It’s intellectually lazy to append the LAN to every TOOTB. This play occurred during Yasiel Puig’s sixth game in the majors in 2013; how was Andrelton Simmons to have known not to run on him? TOOTB to be sure, LAN not so much:

The TOOTBLAN Tracker (not updated since 2015) recorded “extra base outs, outs on would-be sacrifice flies, pickoffs, double offs, fielder’s choice outs with an open base, batter’s interference, runner’s fielder choice, runner interference, caught stealing on a walk (also known as a Cedeno), hit by batted ball and sundry other things that can happen during a baseball game. Stolen bases are counted separately (unless preceded by a pickoff).”

That strikes me as both too inclusive (it’d count the Simmons play above as a TOOTBLAN) and too restrictive (ending a game on a caught stealing certainly has nincompoop elements, regardless of who does it). There are some baserunning admonitions that make sense, like never make the first or last out at third. Let’s add this one: Don’t make the last out of the game on the basepaths.

Granted, that’s overly cautious. Game theory tells us that if you don’t make an out on the basepaths from time to time, you’re playing too conservatively. Appropriately aggressive baserunning, cut down by an absolutely perfect throw, may be defensible. It may make sense. But if it ends a game with your team trailing, it’s never a good look.

I asked BP’s resident data genius, Rob McQuown, to create a list of all games that ended with a player making an out on the basepaths (including pickoffs), as happened twice on May 11. The spreadsheet he gave me lists 824 instances dating back to 1940. If we look just at the years since 1950—the first year for which Retrosheet has mostly complete play-by-play data—the figure falls to 761, or about 11 per season. 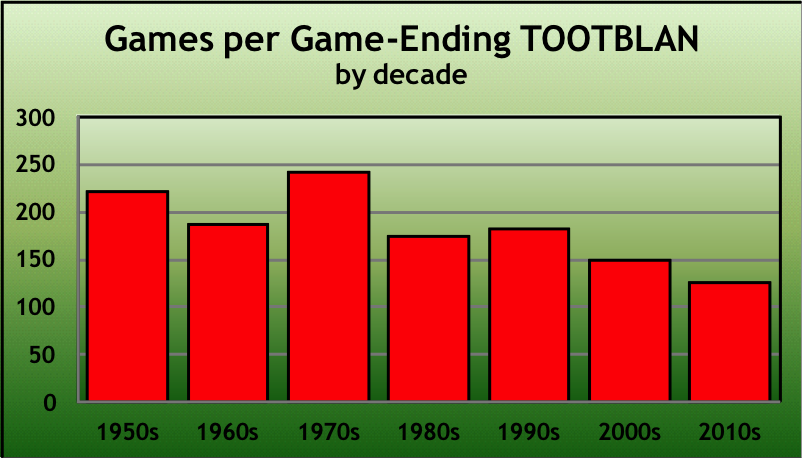 The Golden Age of game-ending TOOTBLANs? We’re living in it!

Keep in mind that we’re not talking big numbers here. We’re on pace to have 19 games end each season this decade with a baserunner being thrown out. That’s one out of every 126 games. So don’t read much into the seeming increase over the decades. An increase in rate from really, really rare to really rare is still, you know, rare.

We’ve had seven so far this year. Two were the plays shown at the top of this article. The other five:

You and I might argue that not all of these TOOTBs are LANs. But I’m not here to comb through hundreds of games that ended with a runner getting thrown out trying to advance. Rather, I want to gauge how often something happened like on May 11—two game-ending TOOTBLANs in one day.

The answer, it turns out, is 30. Using the records McQuown dug up for me, I found 30 dates on which two games ended with a baserunner thrown out trying to advance. (There were no dates on which more than two ended that way.) What we saw on May 11 happens once every couple seasons.

The last time: May 2, 2015, when two baserunners were hit by batted balls while running from first to second with two outs in the ninth: Taylor Featherston of the Angels (Giants won, 5-4) and Jordan Pacheco of the Diamondbacks (Dodgers won, 6-4). The last time before that: April 24, 2014, when Marcus Semien of the White Sox made the last out of the game on a strike ‘em out, throw ‘em out double play (Tigers won, 7-4) and Bryce Harper of the Nationals was doubled off second when Jose Lobaton lined out with one out in the ninth (Padres won, 4-3).

And, as this clip, generously provided by Kazuto Yamazaki, illustrates, game-ending TOOTBLANs know no boundaries.

You need to be logged in to comment. Login or Subscribe
bigchiefbc
To me, the TOOTBLAN to end all TOOTBLANs was Kolten Wong ending Game 4 of the 2013 WS getting picked off at first. That was beyond terrible.
Reply to bigchiefbc
mainsr
Yeah, that was good. In the article, I linked to Babe Ruth getting caught stealing for the last out of the '26 Series.
Reply to mainsr
jdeich
"Not the tying or winning run" and the base-out situation should factor in. It's understandable trying to score in a one-run game, or take second if you're the lead/only runner.

Matt Kemp thrown out trying to advance to third in a 6-1 game smells more TOOTBLAN-esque.

The runner's *ahem* athleticism should also be considered. The Babe Ruth incident would be more defensible (one-run game, singles hitter Meusel at the plate) if he had more than... Ruthian speed.
Reply to jdeich
mainsr
The 1926 season was Ruth's fourth best in terms of total SBs, with 11, though he was caught 9 times.
Reply to mainsr
Screamingliner
April 24, Turner was picked off by Posey, not Melancon.
Reply to Screamingliner
mainsr
Thanks, Screamingliner. Either I completely misread the game summary or there was an error when I wrote this. (I'm putting those odds at 90/10). I'll get it fixed.
Reply to mainsr
TheArtfulDodger
Re: Simmons not knowing to not run on Puig... Yasiel *did* do this in his first game in the majors:

http://m.mlb.com/video/v27719161/sdlad-puig-grabs-fly-ball-cuts-down-denorfia
Reply to TheArtfulDodger
mainsr
That play was a game-ending TOOTBLAN! Did it seem to you as if Denorfia wasn't going all-out to get back to first? Seemed that way to me.

That was an amazing season. Puig .925 OPS, Jose Fernandez ROY.
Reply to mainsr
Ambrose Benkert
In the Japanese game the runner was presumably sent home by the third base coach, so I think he should get most of the blame.
Reply to Ambrose