There’s a reason why batting average is often still, after 150 years, the first number you see attached to a hitter’s name. It’s not because it’s a good stat for measuring a player’s offensive performance: it’s hardly terrible, but there are a dozen better ones. It’s because fans have internalized its value: they can glance at it and quickly establish whether it’s good or not. .310? Pretty great hitter. .220? Not so much. That’s all it takes: no counting, no comparing, just instant verification.

While this method is often wrong and by nature reductive, internalization is still a vital element to the ambition of any statistic. It’s why people shot down metric speed limit signs in the 80s, why people still type on QWERTY keyboards, and why WAR made it while Win Shares fell short. BP’s own True Average scales itself to the same digits, to cash in on that previous knowledge. If our job as baseball analysts is to take the numbers and tell a story, internalization helps with the feel.

As the quantification of baseball explodes, however, we rarely have time to get a handle on what exactly a good number is supposed to look like. Nor is it particularly easy to re-evaluate the benchmarks we’ve previously established. For example, I remember 15 years ago, scouring my Adam Dunn-embossed copy of Baseball Prospectus 2002, searching for deep-sleeper pitching prospects for my fantasy team. My advanced strategy was to search for young arms that may not have had success, but flashed minor-league strikeout rates of at least 7.0 per nine innings. This year, Jhoulys Chacin has 7.24 strikeouts per nine innings.

That’s why I embarked on this little project, perhaps as much for me as it is for you: a simple visualization of every major statistic, and what “good” and “bad” look like. Using 2017 numbers (because we’re here, and feel them, even if the sample is smaller), I collated every qualified pitcher (99 of them, rather conveniently) and ranked them, with bad results generally on the left and good ones on the right. I then pulled the name at certain percentiles and, with their value, listed them below.

(A few disclaimers: since this is only one-third of a season’s worth of sample size, the distribution will be much wider than it would be with a full year’s worth of data. I’ll revisit at the end of the year, if desire exists, but the intention is to capture the connotation of each stat today, as you’re reading this. Also, note that not all distributions are normal, and that these statistics are as of May 29, 2017. All feeling quickly grows outdated. Look for the hitting version of this article next week.) 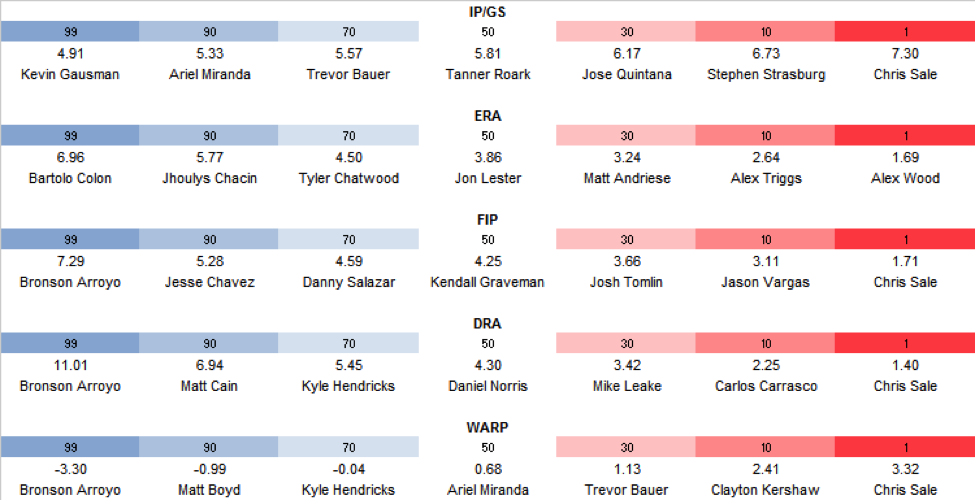 A pretty good one to start off: the median starter in baseball this year is averaging fewer than six innings per game. This is one of those examples of the trends outdating our descriptors: the term “quality start” insinuates that it’s the starter’s job to take pressure off the relievers, and give them as much quality as he can. That’s just not how baseball works anymore: now it’s the starter’s job to condense that quality as efficiently as possible, and let the nine relievers handle the rest.

FIP and DRA match each other fairly well, although it’s interesting that DRA has a really ugly bottom tail, which leads to those bottom WARP scores. One adjustment I routinely have to remember in leaderboard surfing is that for WARP, a pitcher really can be five or six or seven wins below replacement level, a figure that seems, instinctively, difficult to grasp. 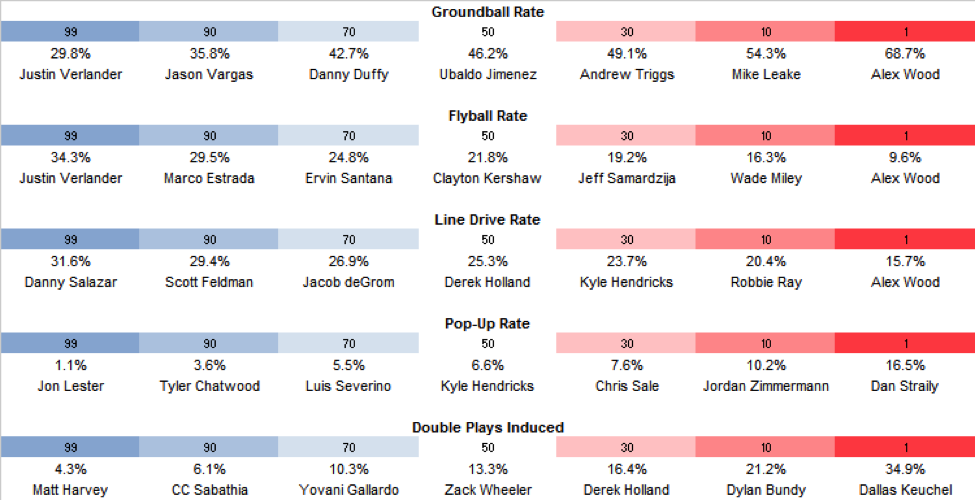 There’s nothing terribly counterintuitive here, though it’s interesting to see how disparate pop-ups can be for pitchers, a play that’s effectively the same value as a strikeout. As wonderful as the latter is, and as “famous” as pop-ups were for explaining at least part of FIP overperformers, I wonder if we still fail to appreciate a batted ball that feels, viscerally, like kind of an accident.

Another thing to glean: Alex Wood has been unfathomable in 2017. 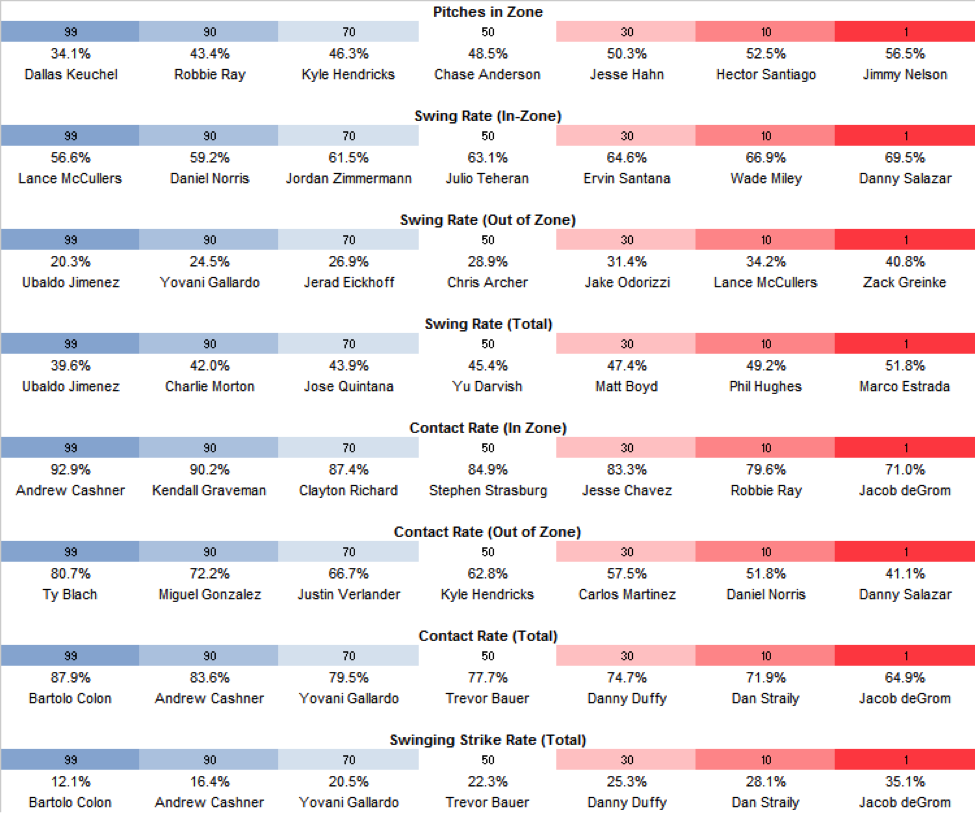 One of the old pitcher baselines was the ultimate control group, the 3-0 count on the opposing pitcher. Very similar is the out-of-zone swing rate against Ubaldo Jimenez, the starter you should have zero confidence in ever throwing a strike at any level of intention. And yet a fifth of his pitches outside of the zone still get swung at. At least based on my internalized expectations, batters swing less at strikes and more at balls than one would expect. 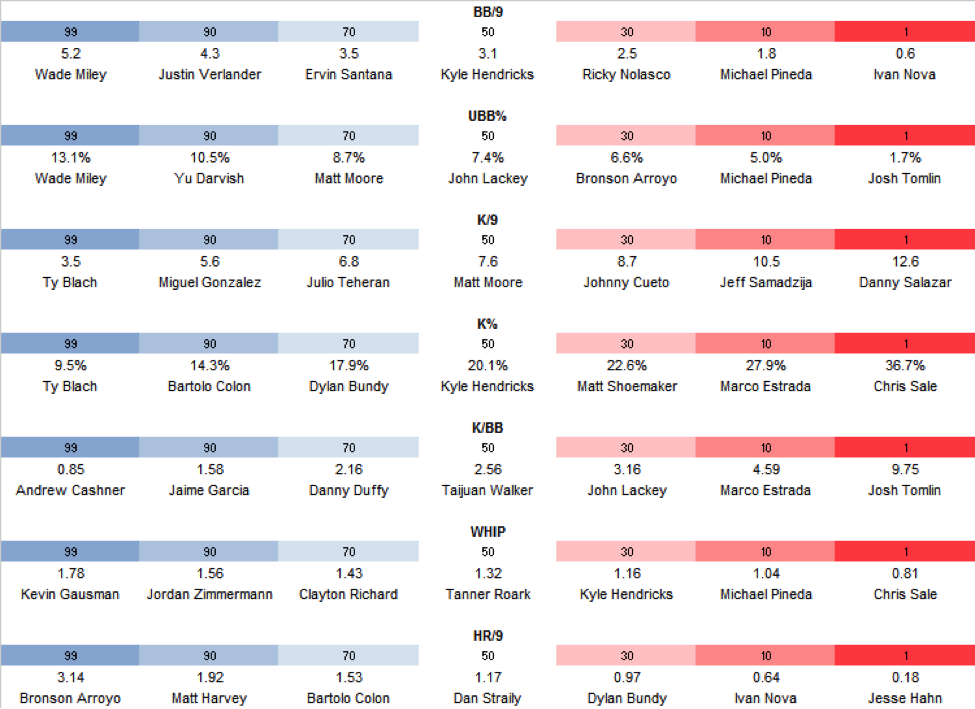 Another adjustment: way back in 2014, Jason Hammel posted a 1.17 HR/9. Among 88 qualified starters that season, he ranked 83rd. That number is now the median. This article isn’t really meant to measure trends; there’s plenty of pieces that do that. But it does take some time to get used to our new environment.

There have also been articles talking about why K% and BB% are more useful than K/9 and BB/9, and this chart is a perfect example. The leader in K/9 is Danny Salazar, but he’s not really the best strikeout pitcher, because his poor performance in non-strikeout plate appearances leads to him facing more batters than everyone else. In terms of K%, he sinks to fifth, behind a reasonable list of Chris Sale, Max Scherzer, Jacob deGrom, and whatever deity is inhabiting the body of the aforementioned Alex Wood.

True Average is centered around .260, but so far this year the league is averaging .251. I have to admit that, from a numerically aesthetic standpoint, I like .250 being average. It’s clean: one out of four. From an actual gameplay standpoint, I think I’d prefer a league that batted .280/.320/.380, but that’s a different article. Again, for evidence that these tails will shrink: Ervin Santana. 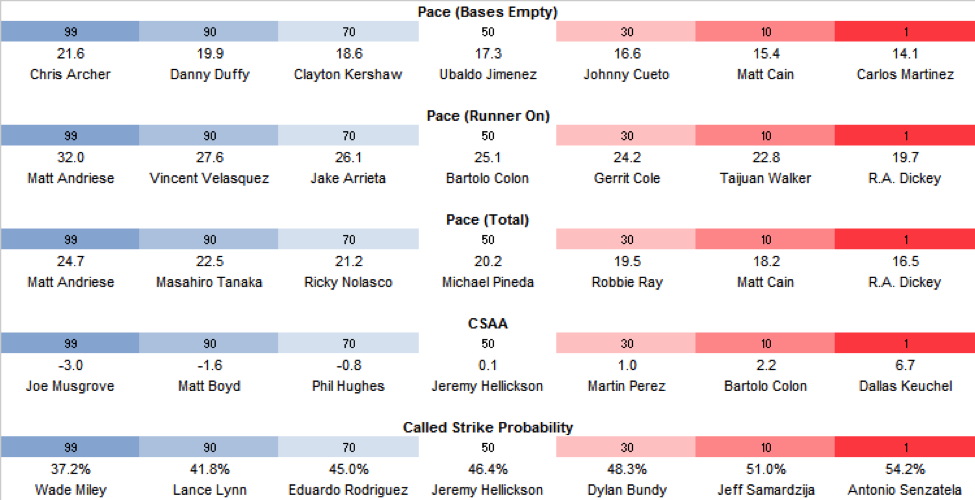 If you were looking at that zone percentage number for Dallas Keuchel earlier and wondering how he was getting away with it, that Called Strikes Above Average (CSAA) is how he’s getting away with it. In general these distributions are pretty close to normal, and nothing too out of the ordinary. I’m a little surprised, I suppose, that we don’t have an outlier on the left end of pace, particularly with the advantages that people are starting to find with holding onto the ball. Relievers, obviously, are not included here.

After looking at averages for a thousand words, it’s only natural to conclude with the obvious question: who’s the most average starting pitcher in baseball? In terms of WARP, it’s Mariners no. 2 starter Ariel Miranda, who’s on pace for exactly two wins on the season. But that’s not a particularly satisfying (or probably very permanent) answer.

So I fulfilled the ultimate analyst cliche and asked the internet. These were the responses I didn’t miss:

This list feels like it leans a little south of true average to me. Part of this might be the fault of the English language: if ordinary is the opposite of extraordinary, then the average pitcher is often thought of as being someone with no extraordinary talents, i.e. mediocre. But it’s also just an example of how the word “average” is generally considered a pejorative. No one wants to be average. We are all, on average, average.

My method for measuring this is equally unscientific: to find the plainest pitcher, I took all of the statistics above and, weighting them equally, measured each pitcher’s rankings and took the standard deviation of them. This is absolutely not the way you should do it. But if you did, this would be your Averageness Leaderboard for 2017:

Not only does Matt Andriese win, he does so despite being the extreme outlier on one of the less important statistics (pace). He’s your average. Just about every team would happily take it. Or you can reject my method, close your eyes, and say Dan Petry. Yeah. Dan Petry sounds about right.

You need to be logged in to comment. Login or Subscribe
newsense
WARP is not a rate statistic :-)
Reply to newsense
BarryR
I love this. Please track this on a regular basis, like the first of each month. It would be interesting to see how the median changes, assuming it does.
Reply to BarryR
Lagniappe
I agree with Barry. This is useful and i would like for it to become a regular feature.
Reply to Lagniappe
ADprospectus
It would be nice to include something like this as part of the introductory section of each BP Annual (which wasn't updated in 2017, since it contained the same language that appeared in 2016's version about it being the first year to incorporate DRA, two years of PECOTA projections, etc.).

This remains a confusing part of the Annual. While I don't hate K/9 and BB/9 and there's much to be said for tradition and continuity in these statistical presentations, the written comments usually refer, if at all, to K% and BB% and almost never to the /9 varieties, which makes the reading experience disjointed.
Reply to ADprospectus
BrewersTT
Terrifically useful, thanks. The kind of thing where just how badly you needed it isn't clear until somebody hands it to you.
Reply to BrewersTT