Outside the window of the school bus, a zoetrope of sun-dappled suburbia flowed by us. The song Starlight rasped out of the radio speakers ahead, muffled by the happy noise of elementary-school children, ready to become afternoon children, sunbaked children. It was May of 1988 and I was nine, as was my friend next to me, Tyson. I was not thinking about home. I was thinking about a baseball card I did not own.

Every boy had a baseball card collection in May of 1988, but Tyson’s paled in comparison to ours. He did not care for baseball, but enjoyed the camaraderie. But he did have what was, in that exact moments, one of its crown jewels: the 1988 Score Gregg Jefferies rookie card. 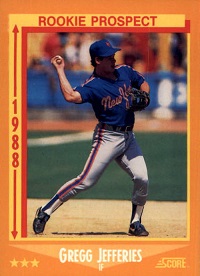 This card was the least desirable of Jefferies’ three editions; Score itself was the also-ran of card companies. But that’s exactly what made it so attractive; no one collected Score, so no one had it. Except Tyson. I stared at it with unmasked envy: the elegant yellow-orange border, the crisp font, the royal blue jersey, the face hardly older than our own.

Tyson got off the bus before I did, but both our stops were well along the route. So I had plenty of time, maybe half an hour, to barter, charm, whine, and beg for that Jefferies. Tyson did not care about the Mets prospect himself, nor did he probably care about the five dollars the card was worth. It was a chance to feel desired, to feel an inkling of power, but I quickly made him understand its downside. I could tell he grew pained as I offered him other cards, cards he cared about no more than the one he held. I offered more.

As we neared his house my desperation grew. Finally I hit upon an idea: that I could trade for the opportunity to share the card, years before the Simpsons comic book episode. It was a stupid idea: how do you share a card? But Tyson was tired; I had worn him down. He acquiesced, and as he stepped past me to move up the aisle toward the door, Gregg Jefferies stayed behind.

I knew, or at least looking back as an adult I want to believe I knew, that I had hurt him, that by the end I had left him no choice but to lose a card or upset a friend. But I was nine, and I wanted that card so much. It made me happy. I’m sure I went home, put it in my binder next to the others, stared at it for a moment, and slept a tranquil sleep. Tyson never asked for the it back.

I still have that Gregg Jefferies card. At some point, leaving it out on the carpet, my father stepped on it and creased it lengthwise. The Rookie Prospect wandered through a quiet career, and we all grew old together. The card is now worth ten cents, mint.

Tyson, if you ever read this, you can have the card now. It’s your turn.

Ships in the Night

For some, it'll be the guy they shared an infield with for six years before the tragic trade halfway across the country and, more importantly, into the other league. For some, it'll be the longtime division rival who they saw for shared family dinners every time their teams were matched up against each other. Others cross traditional boundaries, and find their lifelong running mate in the video room, the front office, the grounds crew, or the concessions stands. What's important is not who, or how, or even why; what's important is simply that.

And so I would like to congratulate Bryce Harper, sometimes considered hotheaded and overbearing, sometimes a seeming baseball rat who surely doesn't have any real companionship in this life, and at all events callow enough to make it unlikely that he understands the worth of an extra home run compared to an extra 15 minutes at the end of dinner with your tablemate, on the next 70 lovely years of cocktails and museums, vacations and day hikes, high culture and low, activities and just hanging out, with swimming superstar Katie Ledecky.

…@Bharper3407, if you end up suspended, come on down to Palo Alto and hang out at the pool for a day!

On June 30th, 1990 the Mariners and Brewers faced each other in the old Kingdome. The two teams had a history of bad blood, tracing back to scuffles during a spring training doubleheader in 1989. With the Mariners leading 5-2 in the bottom of the 8th, veteran reliever Bob Sebra was called in to finish off the game. Jeffrey Leonard hit Sebra’s second pitch out for a home run to left. His sixth pitch was one of legions turned into a double by future Hall of Famer Edgar Martinez. It was here that Sebra, three years removed from his last successful major league season, and perhaps aware his 8+ ERA did not bode well for his future employment, decided to throw a ball at the rib cage of Mariners’ LF Tracy Jones.

The plunking set off a fight that lasted 7+ minutes, had three distinct acts, a body-slammed manager, and a very angry Randy Johnson. There is absolutely no way it would happen in baseball today, almost certainly for the better. Still, for the sole purpose of a sober analysis of history, here are a few highlights: 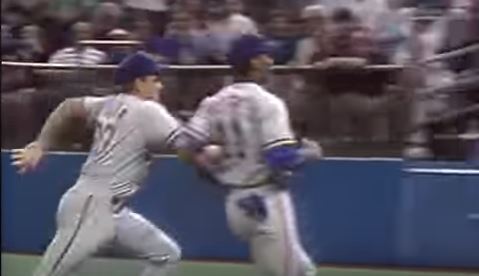 In case there was doubt as to Sebra’s intent here is an image of him sprinting towards home to confront Jones right after hitting him with a baseball. These are not the actions of a man who had one “get away”. 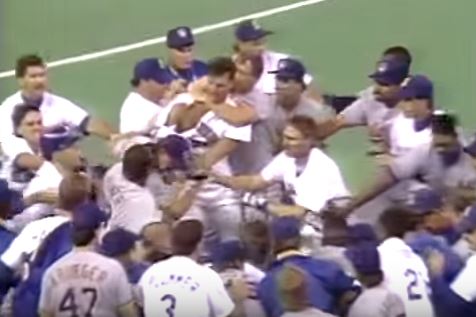 You know that scene in the Fellowship of the Ring, in the Mines of Moria, where the orcs bring the troll and it immediately starts bashing people on both sides of the fight? That’s Randy Johnson here, and before the teams can continue the fracas they temporarily unite to corral the raging, 6’10”, mullet-adorned colossus. 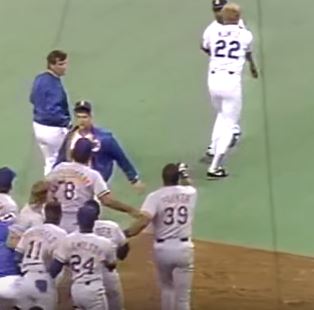 39-year old Dave Parker, still a terror at the plate, and still a 6’5”, 230 lb miscast NFL linebacker, took umbrage with someone, or something. 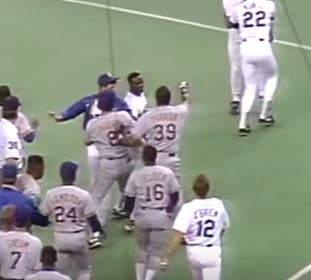 Harold Reynolds, recipient of a George H.W. Bush “Point of Light,” attempted to use diplomacy. 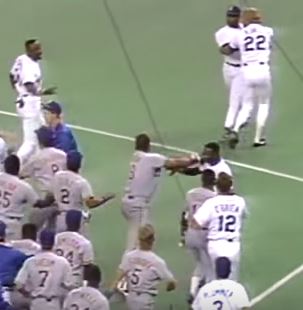 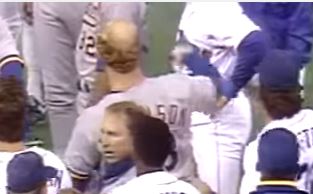 It was different era in many ways. Whereas our modern times encourages a quick acquiescence to baldness, reliever Ron Robinson provides an example of when men were men, and a bald spot was fought every step of the way, even if the effect could get one confused for a medieval friar. 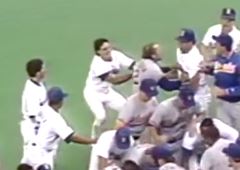 The most dramatic moment occurred near the end. Milwaukee manager Tom Trebelhorn began jawing with an indistinguishable Mariners (aren’t they all, really?), and utility infielder Jeff Schaefer grabbed hold before administering…. 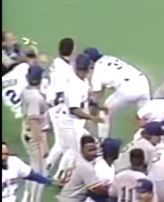 A textbook bodyslam. Trebelhorn, who described the fight by saying “Depending on your perspective, it was the best or the worst ever”, was not only a primary instigator and prolonger of the fight, but also was not ejected for his role. In addition, he wore a jacket under his jersey, despite the game being played in a climate-controlled dome. 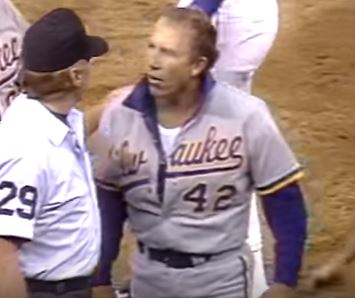 Every story needs a villain.

For his part, Sebra was as honest as one can be about his mindset:

“I drilled him, I hit him on purpose…..Things haven't been going right for me or the team lately. It was time for someone to take a lump. I wasn't trying to hit him in the head, but I was trying to drill him."

Whether Sebra felt his time in baseball was growing short or not, it’s unlikely he knew how much hitting Tracy Jones would accelerate his demise. The brawl-igniting fastball was the last pitch he ever threw in the majors. We have little insight as to whether Sebra recalls his grand exit with pride or remorse. Like most of us who have rage quit a job, I imagine it’s a bit of both.

You need to be logged in to comment. Login or Subscribe
JohnnyFive
Randy Johnson as a troll, fun quotes from both Trebelhorn and Sebra, and perhaps a gentle reminder that I should reach out to those who I may have been a bit thorny with when it came to baseball cards. All in all, a great article and a great way to start the morning. Thanks!
Reply to JohnnyFive
doctawojo
"It was a combination of Hepatitis C, which he said he thinks he got from sharing shaving razors with teammates, and anti-inflammatory medication, that Bob credits with destroying his liver. Although Bob has never been an alcoholic, a doctor told him that even at age 26, Bob's liver looked it belonged to one." Link.
Reply to doctawojo
BrewersTT
Thanks for finding that, Jason. I'm not a doctor, but I'm thinking it's a reasonable assumption that his struggles on the field were related to having a failing liver. Very unfortunate.
Reply to BrewersTT