Papa John and the Destruction of the Mets 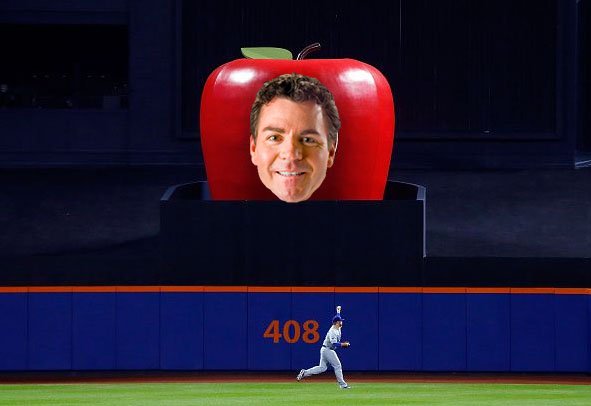 The cell phone sitting on the desk beside him pinged, signifying the arrival of a new email. He frantically rifled through the piles of papers and signed Peyton Manning memorabilia hiding the device, finally retrieving it and reading the missive. He let out a frightening celebratory cackle as he scanned through the few short paragraphs. It was now official. He had done it. Papa John had partnered with the New York Mets, the 22nd team to join him and the final hurdle in cornering the New York market. Soon, the MLB and then the world would belong to Papa John.

The deal, announced shortly before the season began, didn’t sit right with many of the Mets, who had become fiercely loyal to local New York pizza joints where they often gathered to drown their sorrows in cheese and grease. The first to speak up was beloved captain David Wright, who had yet to meet a wrong he could not rectify. However, Papa John, in all his middle-aged glory, proved a formidable foe, quickly (chicken) popping Wright straight in the shoulder. Wright, with his remaining strength, wrote out in pizza sauce a message for his teammates, but the flavorless tomato water refused to adhere to the napkin, and the message was lost before it was fully written. Papa John casually stepped over the body, picked up the soggy napkin,and nonchalantly wiped Captain America’s super serum off his knuckles, knowing his work was close to complete.

Much like with his stores, the bulk of the work was done by an underpaid, underperforming employee whose attentiveness was inversely proportional to the time of day. Terry Collins had always been jealous of his doppelganger, owner of Papa Murphy’s, the largest U-bake chain in the country. While Pizza Terry Collins found his name displayed in fridges and garbage cans across America, Baseball Terry Collins only found his name in articles calling for his firing and on the backs of Tripe-A jerseys collecting dust in the bowels of thrift stores. Papa John quickly wooed Terry Collins with the promise of naming a pizza after him—beer crust with cloves and sadness–and a deal was struck.

For Baseball Terry Collins, the glory of matching his counterpart far outweighed the glory of managing a professional baseball team. He felt no loyalty toward New York pizza, which he found far too difficult to eat while holding a beer bottle, or his team, whom he found far too difficult to manage without a beer bottle in hand. One by one, he picked them off, inching closer to the ultimate prize. Some, like the impressionable young Syndergaard, were easy targets, while others, like Matt Harvey, required more inventive methods.

Though there remain a few unscathed Mets, Papa John has demonstrated that when cheap pizza and narcissism come to call, skill and mental fortitude fall victim to dough and trickery. Soon, the MLB will celebrate Papa Slams, sWinging strikeouts, and shutout Garlic naughts, so eat your share of good pizza while it lasts.

About two years ago, on a sleepy January husbandly errand run, I was listening to a radio station where Gary Wright’s “Dream Weaver” came on the radio. After it ended, the DJ came on and shared some anecdote during the bumper about Jeff Weaver’s wedding and how he had Gary Wright sing at it.

I have often thought about Jeff Weaver getting the guy who sang “Dream Weaver” to sing “Dream Weaver” at his wedding, only recently finding the corroborating evidence. They apparently had become acquaintances during his days in Detroit, so it makes sense why a Toledo area radio host would know about this.

So of course I had to find out more information about Jeff Weaver’s wedding. When was it? Did he use Adobe DreamWeaver to make his invitations? Did political campaign manager Jeff Weaver write the invitations? Did Sigourney Weaver emcee? Did anyone weave baskets during the procession?

So I thumbed through my back issues of InStyle Weddings magazines until I hit the summer 2008 edition, page 88, “Aisle Style.”

So what that means is, he wed during the offseason (good move), had Gary Wright sing “Dream Weaver” at his wedding (also a good move) then signed a minor-league deal with the Brewers the following year, pitched poorly for Triple-A Nashville, then was released just in time for his big feature in InStyle Weddings.

But all turned out okay. He got back into the majors with the Dodgers, faced his brother Jered in a game, and gave Wright tickets to one of the stars. I did not find out much more about his wedding, other than it included had edible chocolate plates, so I will assume all of the above was true. Wright also released a longer version of “Dream Weaver” for the Wayne’s World soundtrack, and I will assume Jered used that version at his own wedding.