Unique pitching lines typically don’t tell us anything about baseball, not in the sense of helping us understand the current state of the game anyway. They might tell us something about the expanse of possibility within the confines of the game, or about nature of the individual pitcher making that small bit of history. But very seldom are these lines worthy of including in a hypothetical time capsule.

Carlos Martinez’s start against the Yankees on April 15 doesn’t seem likely to offer a representative picture of any version of baseball—past, present, or future. It does, however, allow us to spend a moment in that unlikely—but possible—world where real, familiar phenomena progress to their illogical extremes. Like an episode of Black Mirror that edges too close to the realm of the believable.

In that start, a Saturday afternoon affair at Yankee Stadium that the Cardinals lost, Martinez faced 30 batters and somehow did this:

There have been 42 pitching lines matching the IP/H/R/ER portion of that line. In fact, the Red Sox starter Eduardo Rodriguez posted one example just two days before Martinez, and his eight strikeouts were an all-time high for the line in the intervening 40 hours or so. A young Jonathan Papelbon put up a seven-strikeout version in one of his three career major-league starts.

A variety of factors led to Martinez unleashing this line upon the world. One was almost certainly a lack of control. His changeup was especially wild that day. Another might have been his consciousness of the short right field porch and the threat of home runs. Another? His stuff. He was firing sliders with real drop and everything was getting to the plate at 86 mph or faster.

BP’s Russell A. Carleton recently delved into the changes that might have brought about the mysterious home run spike of 2015-to-the-present, succinctly summarizing the approach change sweeping the league as: “Sit fastball, swing hard, strikeouts don’t matter.” That shift, regardless of how much credit it deserves for the home run spike, was always going to provoke a reaction from the mound. Martinez’s day is a very extreme example of one possible reaction: “Don’t pump fastballs, go for whiffs, contact is bad.”

We’ve long associated the style of play based around the Three True Outcomes with hitters like Adam Dunn and Chris Davis. But now it’s hard to get past the idea that pitchers are pushing the game in that direction, too. It could be a survival tactic amid the home run surge. Or it could be intentional gamesmanship—a matador drawing the bull and then stepping aside as it charges past. Whatever sparked this strategic judo move, the result is a further plunge down rabbit hole of the true outcomes.

The percentage of major-league plate appearances ending with a ball in play is down, as you probably would have guessed. 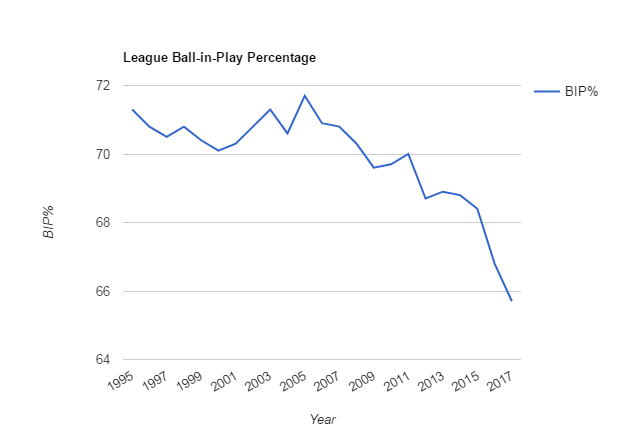 In 2017, only 65.7 percent of plate appearances have concluded with the batter doing something other than striking out, walking, getting plunked, or trotting leisurely around the bases. That’s down from 66.8 percent in 2016 and further down from the rest of the decade—the rate having been between 68.4 and 68.9 percent in each season from 2012 to 2015.

More importantly, they’re increasingly the type of contact hitters are trying to make. (Yes, I know everyone has always been trying to hit home runs. But when you take a typical D.J. LeMahieu or Eric Hosmer swing, you shouldn’t expect to hit a home run. Once upon a time, you could claim you were trying to avoid lung cancer while smoking a pack a day.)

Pitchers, willingly or not, are reacting to that reality.

Here are two more unique lines from 2017 that, taken together, don’t look all that unique:

The first belonged to Sean Manaea on April 15 (yes, the same day Martinez twirled his weird game), in what would turn into an A’s loss against the Astros. The second sprouted the very next day from the arm of the Marlins’ Dan Straily. It was the second in a still-active streak of eight starts in which Straily has given up four hits or fewer. He’s gone at least five innings in all of those starts, though not usually much further. If you include the five-inning minimum, it’s the longest streak since Ted Lilly did it over 10 starts in 2011.

Straily is striking out 24.5 percent of the batters he faces (a good bit above league average), walking 10.7 percent of them (also a good bit above league average), and allowing 1.11 HR/9 (a hair below league average). His contact rates, both in the zone and overall, are down sharply, and he’s second in pop-up rate among starters. All of this combined means 40.3 percent of Straily’s batters faced have walked away with one of those Three True Outcomes, the 12th-highest mark in baseball this season among pitchers with 30 innings under their belts.

Below, you can see the whole list of pitchers (again, with that 30-inning minimum) with a Three True Outcome rate of 40 percent or more:

There are, obviously, multiple ways to get to this list. You could be Chris Sale and just strike out all the people, but mostly you’re looking for whiffs and hoping enough good things happen to counterbalance the homer risk inherent in fly balls.

What makes Straily’s implementation interesting is his complete refusal to give in when he falls behind in the count. It’s his take on a league-wide trend. Fastballs are becoming less common when pitchers are behind in the count. Per Baseball Savant, the rate of behind-in-the-count fastballs (just four-seamers, two-seamers, and sinkers, in this case) has dropped from 65.5 percent just two seasons ago to 62.6 percent so far in 2017, outpacing the general decline in fastball usage.

Instead of trying to get himself over, Straily is often sticking with out-of-the-zone fastballs or sliders and accepting walks in lieu of courting contact. 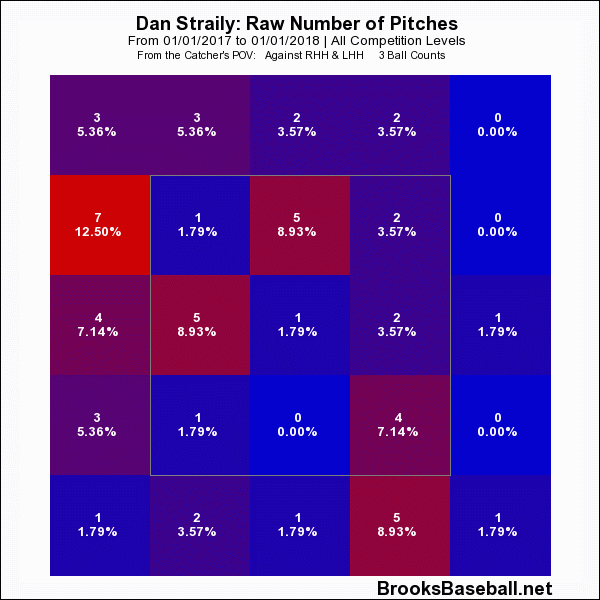 Contrast that with Jacob deGrom, who tops Straily in the stuff and hair departments, and even on the Three True Outcome leaderboard: 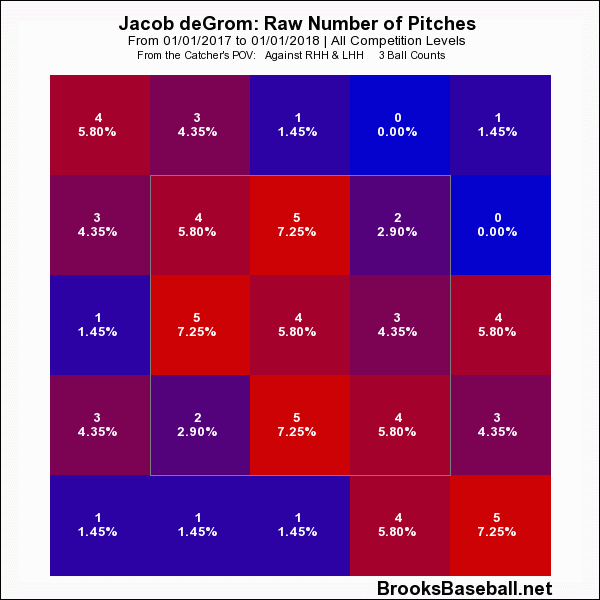 He’s challenging hitters with the best velocity of his career, and even leading all starters in swinging-strike rate by a smidge over Sale. He’s also giving up a career-high number of homers—including four in two-strike counts already, one more than he’s ever allowed in a full season. Still, he’s making it to two-strike counts, and getting by because of his complete arsenal. Current Three True Outcome king Danny Salazar, meanwhile, is being pummeled as hitters key on his fastballs. He’s already seen eight ill-fated attempts at strike one leave the yard.

Per usual, untangling the push and pull of each decision made on each pitch is nearly impossible. But it is apparent that things are in flux. The bat hitting the ball means something different than it did two or three years ago. Swings are increasingly selective and increasing violent. Maybe that means a tight slider is a better weapon when a pitcher is behind. Maybe it changes the calculus of a 3-1 pitch.

As Rob Arthur pointed out at FiveThirtyEight, non-homers are falling in less often, and generating fewer bases this season—possibly because of the shift or the all-or-nothing approaches or some combination of those factors.

Watching Martinez or Straily or Manaea in real time, they looked like oddities to be enjoyed for the day and forgotten. But it’s worth remembering how they attempted to sidestep the danger they faced. With the disclaimer that it is May, and that Straily probably won’t continue to be the league’s most successful suppressor of hits, those starts are looking less like outliers and more like flares from a not-so-distant future.