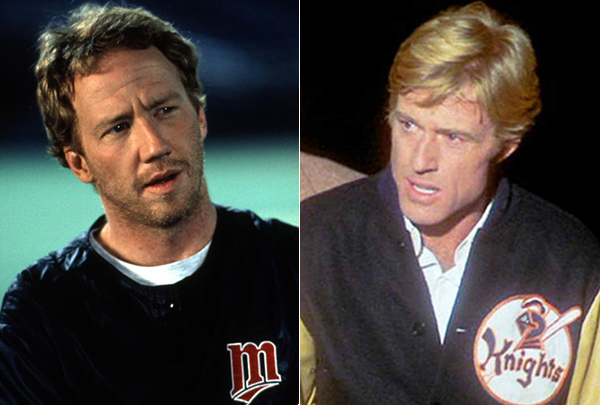 A pointless Internet argument (is there any other kind?) about baseball movies led me to thinking about what fictitious characters would be worth in fantasy baseball. Below is a list of players from baseball movies and how they would be perceived in fantasy leagues.

Lou Collins—Little Big League
The Twins magical ride to the top of the wild card race is a fun and heartwarming tale, but I don’t want any part of Collins on my fantasy team. Size certainly isn’t everything, but in the bulked up, pre-drug testing era, the 5’8” Collins simply isn’t going to generate enough power to be more than an AL-only option, or perhaps a third deep mixed-league corner if you are desperate. Collins’ fantasy appeal mostly comes from the fact that he was guaranteed playing time, but with new owner Billy Heywood capriciously benching Collins because Collins is dating his mom, you cannot even count on that.

Roy Hobbs—The Natural
A 35-year-old rookie with a nebulous past and no minor-league track record to speak of? Sign me up! A shooting in a hotel room, an outfielder dying after crashing through a fence, and a bribe potentially influencing a top player’s effort all illustrate the challenges fantasy managers would have had in the 1930s had our game existed back then. Pick up Hobbs? Whatever. Life in Roger Towne and Phil Dusenberry’s scripted version of the 1952 Bernard Malamud novel is a depressing menagerie of horrific events, and there is a good chance you are going to die long before the season ends and you win your fantasy league. If you can survive this hellscape until 1964, eat at Arby’s in its founding year. Hobbs is the kind of player the worst owner in your league would spend all of his FAAB on. Don’t worry. That guy never pays attention and will finish fifth instead of 10th this year.

Fantasy take: Bid all of your remaining FAAB in mid-July.

Congratulations to Cleveland for overcoming a roster designed to be bad and winning the old American League East, but talk about burying the lead. According to the screenplay, Haywood won the AL MVP Award with a .341 batting average, 48 home runs, and 121 RBIs on his way to a Triple Crown. Sierra, the Yankees closer, had a 1.37 ERA, a 0.84 WHIP and 147 strikeouts in 118 innings; he was so dominant that screenwriter David S. Ward didn’t even bother mentioning Sierra’s saves. You want the drama of a temperamental owner, an aging catcher trying to win back the love of his life, and an ex-con who can’t find the plate to be the center of your draft day? Have fun with that. While you’re overpaying for narratives, I’ll be cruising to a fantasy title on the backs of guys like Haywood and Sierra. Willie Mays Hayes is Cleveland’s exception; those 50 steals make him valuable in nearly any format. But the rest of that team is fantasy quicksand. Some idiot in your league is going to overpay for Ricky Vaughn’s velocity and pretend that the control is fixable. Don’t be that idiot.

Ebby Calvin “Nuke” LaLoosh—Bull Durham
In dynasty leagues, I love pitchers like LaLoosh. There is always that prospect lover in your league who gets wind of triple-digit readings on the radar gun and will waste a reserve pick on an arm like Nuke’s. Even worse for Nuke’s fantasy chances is the idiotic way he is being managed. Pairing Nuke with an ancient catcher long on homespun baseball anecdotes but short on framing skills and game-calling abilities is bad enough, but then the parent organization makes matters worse by promoting Nuke to the majors to… get a taste of The Show? Experienced dynasty players know how this story ends. Nuke is an arm injury waiting to happen. Even if he somehow puts together that one magical season, this ends in heartbreak. It seems like pretty obvious advice to tell you to stay away from the volatile kid who is being handled by a journeyman catcher and a well-meaning lover with no coaching experience, but somebody has to make the tough calls.

Fantasy take: Avoid unless you can get Nuke as a reserve pick.

Stan Ross—Mr. 3000
Some films end with many unresolved questions that leave the audience wondering if entire scenes were left on the cutting room floor. Mr. 3000 is a terrific example of this phenomenon. The film —about a 47-year-old ex-player who finds out he did not reach 3,000 hits and decides to return to the majors—leaves the viewer with many questions. Why did basic record-keeping go by the wayside; don’t they have Baseball Reference in Ross’ universe? How did the talent pool get so thin that Ross could just walk onto the team with none of the controversy that surrounds someone like Tim Tebow. There is only one obvious conclusion: The timeline in the Mr. 3000 universe had suffered an apocalyptic event that happened so many years in the past that no one talked about it anymore. Once I figured this out, it was the only thing I could think about while I watched Mr. 3000. I was obsessed. To hell with Mr. 3000’s quest for a historical milestone, what had happened to humanity? An environmental disaster? Nuclear holocaust? An alien invasion? There were no signs of damage, so perhaps it had been a deadly plague that had been contained but not before killing off a significant portion of the population. As the closing credits crawled on the big screen overhead, I wept for mankind, while my fellow theatergoers acted like there was something wrong with me, the sensitive man in the fourth row who wept for humanity’s loss while also admiring its resilience and its ability to still show concern for a baseball record. Mr. 3000’s message of hope touched me in a way few movies ever have, and made me think that humanity can survive anything the world throws its way.

Fantasy take: Ross is a $1, AL-only flier in our universe, and a 20th-round draft pick in mixed leagues in which an apocalypse has occurred.

Henry Rowengartner—Rookie of the Year'

Who wouldn’t be tempted to add a boy pitcher, who throws harder than any man has ever thrown, to your fantasy team? But no! He’s just a kid! Think of the ethical ramifications! He might help your fantasy team win but you must draw the line somewhere. I’m sure most fantasy managers don’t feel the same way, which would leave me with the tough decision of either sticking with a fantasy league that unethically exploited a 12-year-old child for gambling purposes, or to take the high road and leave the world of fantasy baseball forever. Thankfully, science has not caught up with fiction so I am spared from making this choice.

Fantasy take: For you unethical ghouls who do not value the life of a small child, Rowengartner is a third-round pick in mixed leagues. I might even take him ahead of Max Scherzer. He’s that good!

Joe Jackson—Eight Men Out
Eight Men Out is such a ludicrous concept film that I was loathe to even include it on this list. Despite some of the liberties the film takes (“Kid Gleason”? What kind of a made-up name is that?), I was enamored with the story of Jackson, no matter how fanciful. If you can ignore the plot holes in a gambling scheme that obviously never happened, it is clear Jackson’s hitting skills would make him a top-of-the-charts fantasy pick even if he didn’t steal any bases. Translating Jackson’s skills to a live-ball era is trickier, but even with an era-appropriate adjustment, he’s an OF2 in mixed and a must own in AL-only. But it is difficult to get too wrapped up in a player’s real-life translation with such a wild, wild story. Gamblers in baseball? A silly nickname like “Shoeless”? A best-of-nine World Series? I don’t know who came up with this story, but it stretches credulity, even in a genre as surreal as this one.

Fantasy take: I refuse to engage in such frippery.

You need to be logged in to comment. Login or Subscribe
Deadheadbrewer
Joe Hardy (Senators) from the film version of Damn Yankees would be worth at ton, if Manfred hadn't imposed the new lifetime ban for players caught using performance-enhancing Deals with the Devil.
Reply to Deadheadbrewer
OrioleDog
Also LaLoosh in his pro debut a gross case of pitcher abuse - new league records of 18 strikeouts and 18 walks?! That's 126 even if those 36 BF's were walks on four, and K's on three, which we know they weren't.

Can you imagine if Jason Groome did that last June?
Reply to OrioleDog
DDriesen
Any advanced analysis of LaLoosh begins and ends with his pitching mechanics. A lawn chair being thrown down a flight of stairs looks more mechanically sound. Seriously, Tim Robbins was the worst actor portraying an athlete since John Goodman tried to be the Babe. At least Tom Selleck as Mr. Baseball he looked like he could swing a bat. I'd spend some FA $ on him.
Reply to DDriesen
jfranco77
I'm sad about the lack of Ginny Baker. I know she's just a 5th starter, but Petco!
Reply to jfranco77
earlweaver
0 Author Wiggen would be a mixed-league second-round pick, with much more maturity than Sale, Archer, and most of the elite SPs.
0 With the catching position so weak, someone would over-bid for Bruce Pearson hoping he'd to snap out of it.
0 What of make of King Kelly (Vernon Simpson)? He's always a threat to be suspended for 50 games. Still a better gamble than Rich Hill.
0 I just don't like the look of Elmer Kane--I'd never except him to hit over a full season, Of course it's exactly guys like this (if you can identify them) that win you a championship.
0 Montgomery Brewster--Hackensack is a bandbox, I know, and pitching is thin, but I don't see much interest.
0 Sammy Bodeen: Again, with pitching so thin, somebody buy the hype and will overpay like he's Dice K---don't be that dunce.
0 Bobby Rayburn: We're talking Barry Bonds level production here, year-in year-out--you might be able to get him cheap from a panicked owner after the first month+ after his move to San Francisco.
0 Dennis Ryan is a cheap middle-infield option for sure. Of course there's a good chance he gets traded out of the league.