It’s been a grotesquely uneven start to the season for Jake Arrieta. From mid-2014 through the end of last season, few pitchers were as consistently tough to hit as Arrieta. The Cubs could send him to the mound knowing he would work deep into the game, miss bats (or at least the barrels of them), and put the team in a position to win, even if he lacked the sharp command that made him (for a year or so) one of the most brilliant pitchers the game has ever seen.

This year, though, he’s having problems he hasn’t had in years. There are pitches elevated in a way they haven’t been, first within the strike zone, then into the bleachers. There are far fewer swings and misses, which is leading to long at-bats and short outings. This isn’t happening every time, and indeed, he got more ground balls in his latest outing—an easy win over the Brewers in which he surrendered just one unearned run over six innings, with six strikeouts and one walk. However, even then he threw 111 pitches in order to get through those six frames.

The primary problem is that he’s not commanding his sinker, which became one of the best in baseball over his first year-and-change in Chicago and on which he relied heavily over the last two seasons. Hitters still can’t square up that pitch all that often (though it’s being hit much harder than it was in 2015 and 2016, when no starter allowed softer average contact on two-seamers and sinkers), but they’re able to wait him out more.

The secondary problem is the fading effectiveness of his secondary pitches. Specifically, Arrieta has seen his curveball and slider get dramatically less valuable this season. There are multiple (or at least multifaceted) problems with each offering, and while he might yet recover his previous form (no, really, he could, although that stretch during the second half of 2015 is obviously impossible to replicate), Arrieta will have to take multiple steps forward if he wants the free agent market to treat him like an ace this winter—or if he wants to add another World Series title to his resume before he hits that market.

Arrieta’s curveball is, perhaps, the piece of his arsenal that has changed the most. He’s seen a significant velocity loss on every pitch this year, but he’s lost almost a mile per hour more on the curve than on his sinker—the pitch he usually uses to set up that hook. As a result, the sinker-curve sequence just hasn’t worked for Arrieta this year. He’s matching the release point on the two pitches, when he throws them consecutively, better than almost any other pitcher in the league. Because of the increased separation in velocity, though, and because of the lateral movement on his curve (which has always been considerable, but which has increased this year), hitters are able to identify the hook earlier.

They’re swinging less—far less, from around 43 percent of the time in 2015 and 2016 to under 30 percent this year. When Arrieta threw his curve over those two previous seasons, it was a ball about 42 percent of the time. This season, it’s a ball 46 percent of the time. Strictly speaking, the difference is small, but it makes a huge difference. The curve still has plenty of movement, but it doesn’t tend to look as much like his fastball out of his hand, or early in its flight toward the plate. Nor does it tend to change the hitter’s eye level the same way. That’s why it’s getting him into more bad counts, and out of fewer jams.

This is probably something Arrieta can change. It might even be something he has changed. One reason why Arrieta’s curve has been easier to pick up this year has been a wider gap between his vertical release point on the sinker and the same on the curve. In his last start against, Milwaukee, he seemed to rectify that: 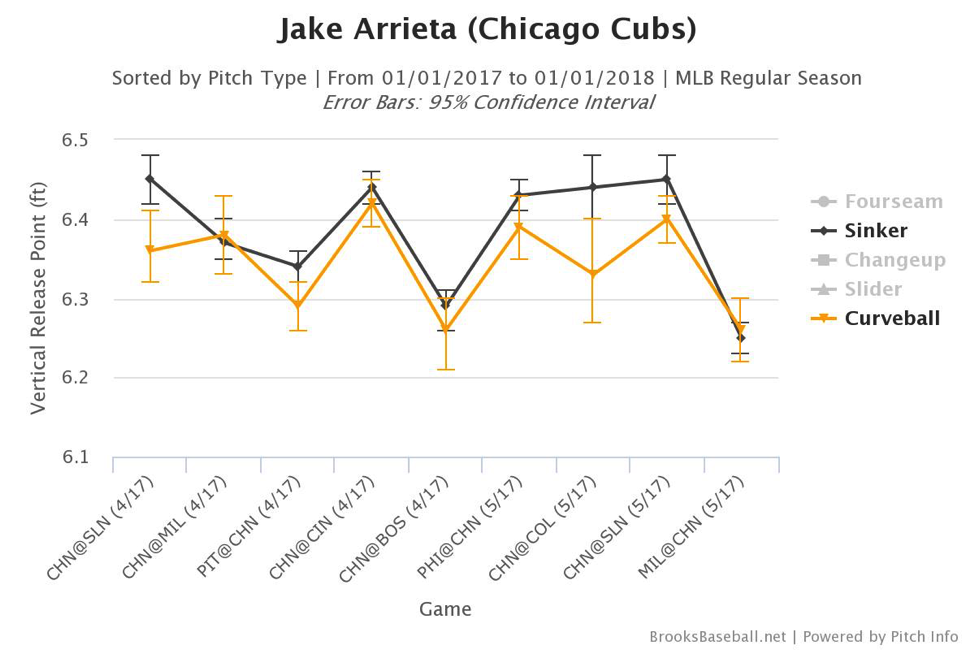 Another reason has been the fact that the curve had slowed down more than the sinker, widening the velocity gap. That, too, seemed to change for the better on Sunday: 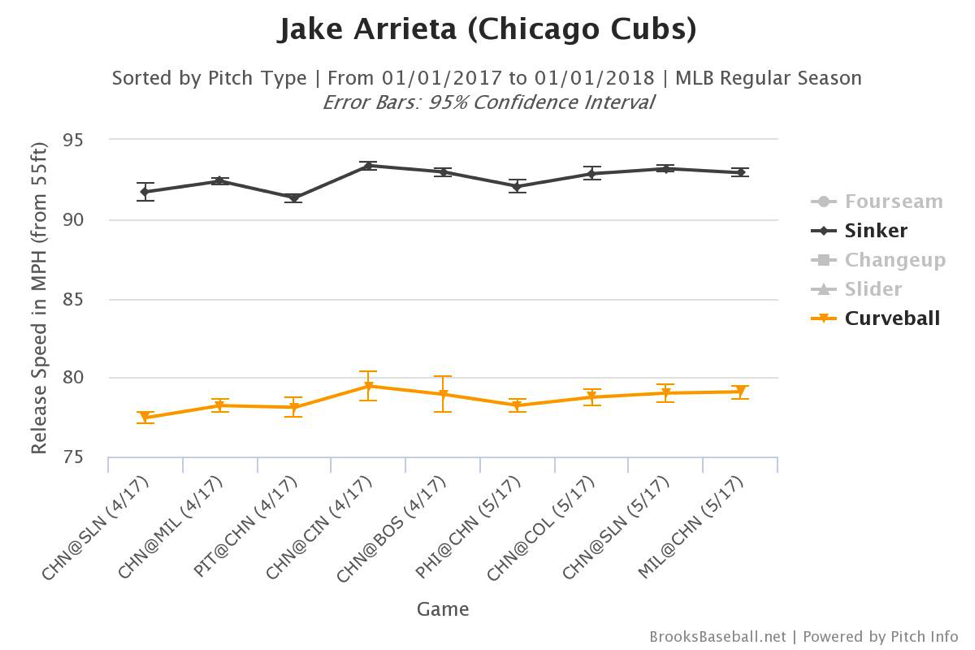 If he can consistently get the curve to firm up, and if the mechanical tweaks he talked about leading up to Sunday’s start have indeed helped him align his release point on the two offerings, the curve might still be a weapon for him.

The pitch Arrieta ought to be throwing more often, though, is the slider. Unlike his curve, the slider hasn’t lost any more velocity than his fastballs have. The notable change to that pitch happened in early 2016, when it stopped being a cutter/slider hybrid and became a true slider, with more vertical depth but less velocity and looser command. That wasn’t good, because Arrieta’s curveball already works like a slider. It breaks hard to his glove side, away from righties and in on lefties. It also has above-average drop. The slider he throws now is a pitch halfway between the curve and the fastball, and it doesn’t work as nicely as the biting, slightly dipping cutter/slider of 2015.

He’s made an adjustment this spring to bring the release points on his slider and sinker much closer than they were in the past, but it’s actually worked against him. Previously, he would trace a very slightly lower arm path on his slider than on his sinker, and release that pitch further toward third base than the sinker. Coming from a clean delivery, it was the kind of difference batters might pick up early, but coming from Arrieta’s deceptive, cross-body, high-gloved semi-windup, they couldn’t, so there was nothing much lost by the variance in release points from one pitch to the next.

Then the sinker would run in on a right-handed batter, while the slider would slice away from them. If the two pitches had been thrown simultaneously, they would have crossed in midair. Thus, while the release points and trajectories were disparate, batters had a hard time telling one from the other, and when the slider was a harder, more cutterish one, they didn’t have much time to react if they did manage to figure it out.

With the pitches coming out of the very same release point, though, it’s much easier for opponents to tell which is a sinker (headed for the inner half on righties, up a bit) and which is a slider (headed, almost without exception, for the area around the outside corner on a righty, at the knees). Presumably, Arrieta can’t just start throwing that 91 mph tilted cutter again. If he could, he would. He’s either lost feel for the pitch, or felt it was messing up too many other things in his delivery and repertoire, or simply doesn’t have that kind of power in his body.

In lieu of fully getting that offering back, he might do well to go back to letting his arm angle drop a bit, getting around the ball, reestablishing the flatter plane that used to separate slider from curve, and moving the release point of the pitch away from that of his sinker. Not that it’s all that simple. If Arrieta is going to make a change he knows could lead to less vertical depth on a breaking ball, he’ll need to be sure that he can consistently execute the pitch, or he’s just inviting hitters to elevate more against him. In the case of the slider adjustment proposed here, that would require a focused effort to increase the momentum of his twisting delivery.

Right now, he tends to develop a hitch during the signature twist that sets up his crossbody action. It makes his delivery a two-phase physical maneuver, leading to pitches that miss up and to the arm side (in on right-handers). By getting stuck that way, he loses the fluid fury necessary to make his natural line to the plate work. He often cuts himself off too much. His arm and upper body struggle to keep up with the lower half, which heads down the mound with less momentum than it might otherwise have. Finally, he sometimes lands with too stiff a front leg, not allowing himself to vault over that leg and get the ball across to the glove side of the plate.

I’m not sure Arrieta is capable of correcting these creeping flaws. He might be tired enough, after two very heavy seasonal workloads, to be simply unable to explode down the mound the way he has in the recent past. On the other hand, he could be doing all of this consciously, preferring to get by for now with the energy that comes easily, and to make sure he has bullets saved for an October run that could set up his free agency. Whatever the case, it’s clear that Arrieta will need to make some changes. He hasn’t been nearly as bad as his ERA suggests, but the only way he’ll get back to dominating opposing hitters is by changing the way he uses and throws his breaking pitches.