We Must Protect Joe Biagini

If you haven’t seen Joe Biagini, he sort of looks like a human, grown-up version of Baby New Year from that Rankin-Bass special. 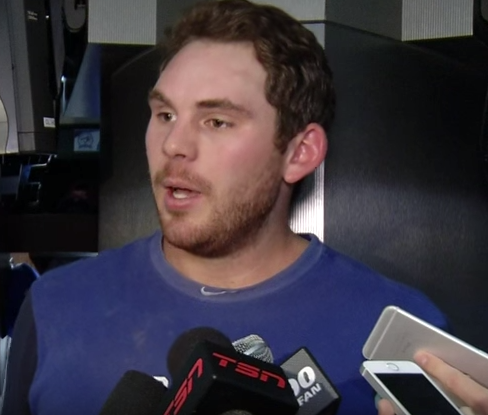 In a five-minute interview at the beginning of this month, Joe Biagini told reporters he was “just kidding” four separate times. He makes jokes, but then he says “just kidding,” because it’s important that you know that he’s just kidding. He doesn’t ever want to hurt your feelings, Joe Biagini. A reporter asked him if he wanted to get the home run ball that gave him his first major league win and he replied with this amazing string of sentences:

Joe Biagini is the kind of guy who says “shoot” a lot, but not because he doesn’t want to curse; he says “shoot” as an exhalation, a placeholder; he cannot conceive of a word that would serve him better than “shoot.” He makes jokes, and then smiles because he’s pleased he’s said something funny. He knows he’s funny, Joe Biagini, in the way a child putting a bucket on her head knows that she is the most hilarious creature on the planet. He also says “umm” and “well” a lot, but not in an annoying way, but more because he wants to say the right thing, something that is real, and that people haven’t said before. Reporters allowed to interact with Joe Biagini should be forced to wear gloves, as you would expect of people permitted access to the Rare Humans room.

Last week Joe Biagini appeared on Intentional Talk, which is the equivalent of taking a child’s homemade kite and dive-bombing it into a stack of gasoline-soaked cigarette butts. He was presented with a series of dares by the show’s hosts, which were calculated cruelly to appeal to a large human child, one who would like to be an air traffic controller when he grows up (he says words like “logistics” and “infrastructure” in describing the profession, but do not be misled: Joe Biagini would like to work at an airport so he can watch the planes come and go.). The dares were as follows:

Clearly Biagini was not removing his shirt, and there’s no way he knows “O Canada” and definitely not in French, so the choice here was entirely illusory. As expected, Joe Biagini does a halfhearted loop around the bases, flapping his arms some. It is not magical. It is, in fact, a little sad, and a little redolent of the first act of a teen movie.

This is unacceptable treatment of Joe Biagini, a pure and unbroken beam of light. He must not be allowed to become corrupted by exposure to us regular people, the oily fingerprints we leave on each other. We cannot allow this to happen again. We must protect Joe Biagini.

There is something inherently humbling, if not outright degrading, about cleaning the floor. It is holding yourself responsible for the lowest layer of our detritus, doing your best to make yourself one with the ground, laboring to cleanse something that will inevitably always grow dirty again. Yet in baseball, it is a task given to the highest authority figure—the umpire. Keeping home plate clean is his responsibility alone, a mundane act of straightening up afforded only to the most powerful man on the field and his little brush. He will sweep the dirt off the plate, and moments later it will again be covered in grime, and he will quietly keep fighting this endless battle with no chance of his superficial victory lasting longer than a few minutes.

But giving this ordinary chore to the highest-ranking man rather than the lowliest recasts it; sweeping the dirt is not then a burdensome assignment but instead a privilege of sorts. It shows that home plate is his, a space so precious that no one else may be given any power over it. Batters may cross and catchers may block, but only ever as figures passing through and moving over borrowed space. Anyone can do anything on home plate—but only the umpire can decide what it means, and so it belongs to him in a much deeper sense than it can to anyone else.

And so there is perhaps no act of defiance so potent as deliberately going out of one’s way to soil home plate. How do you like all your power when you’re using it to clean up this stupid dirt? It is the fiercely petty logic of a juvenile, utterly meaningless in the grand scheme of things but nevertheless biting in the moment. You’ll get ejected anyway, but at least you’ll do a bit to drag your ejector down along with you. As Joe Girardi did in all this furious, inconsequent glory on Saturday:

The umpiring crew last night (a new set, now in New York instead of Tampa) played off of Girardi’s little outburst by calling him over to ceremoniously dust off home plate before the start of the game. It’s a very simple joke, sure—and also a display of cleaning as equal parts privilege and punishment, an ordinary chore dusted off.

During Sunday’s altogether one-sided Mets-Angels tilt, eagle-eyed fans in the Los Angeles area were treated to the following fun fact:

Yes your eyes do not deceive you, that chyron is telling you that Mike Trout is literally out-producing the rest of the Angels of Anaheim at about two times their offensive output. In a game that had many remarkable Trout facts — including the whispered suggestion that Mets skipper Terry Collins considered walking him with the bases loaded — this one might be the most stark. Indeed, the very idea that Mike Trout is out-hitting an entire baseball team of which he is a member is so remarkable that it requires us to reassess the logic of baseball in seven brief postulates.

Said Seven Trout Corollaries On the Occasion of His Breaking Baseball:

While these may seem like typical Chuck Norris-isms, cheaply produced by a hack writer as an excuse to ogle Mike Trout stats, I encourage the reader to look deeper (and stop being such a jerk). For when a player can be as transformatively proficient as Mike Trout, when a player can literally outdo his entire team’s offensive production as a matter of course, we must rethink what we know about baseball. It is not comfortable or easy to admit that Mike Trout has solved baseball as we know it.

But, my friends, the truth is seldom comfortable or easy.

You need to be logged in to comment. Login or Subscribe
jfranco77
Mike Trout: 2 triples
Rest of Angels: 2 triples (noteworthy because the rest of the Angels include Ben Revere AND Cameron Maybin AND Kole Calhoun)
Reply to jfranco77
doctawojo
The Angels' new third baseman.
Reply to doctawojo
MrPops
From the day Mike Trout began playing minor league baseball he knew that on 5/23/17 you'd be publishing this column and he was NOT looking forward to it. But he is forgiving.