Plunking a batter is about being seen doing. It’s also an extra-judicial means of resolving conflict, but that’s not all. If this was simply a matter of settling accounts, there are more private places; we have parking lots. It isn’t enough to do. A baseball man must be seen doing.

Last Friday, with the Dodgers up 7-0 in the ninth, Ross Stripling threw behind Giancarlo Stanton. This was the moment just after impact, and these are the faces of those who saw Ross doing. 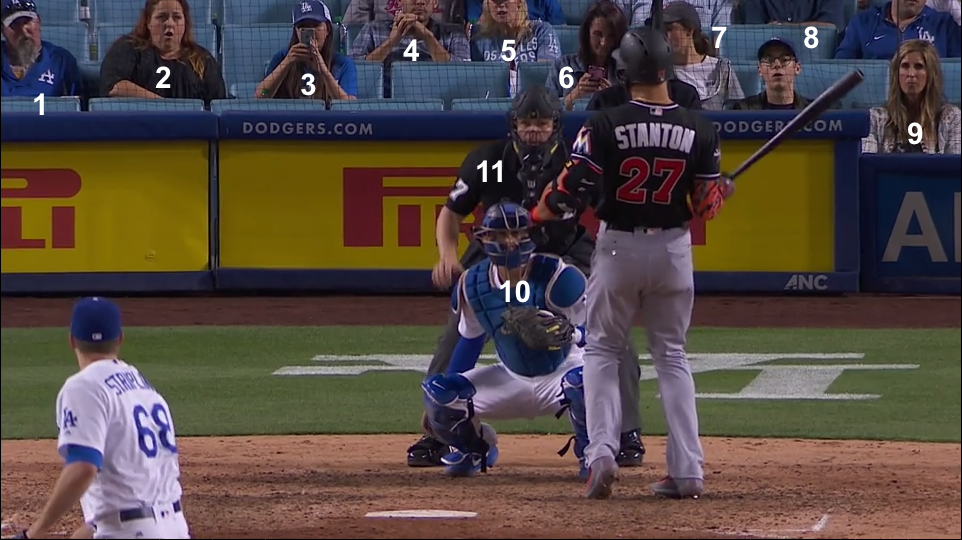 1. Rick has seen this before. He’s lived a life. He wonders how we got here. What lessons could our fathers have taught us differently? What word might we use instead? Also, he’s just a little bit gassy. You almost always regret that last beer.

2. Jan has seen Giancarlo’s face. We don’t know exactly what she has seen on that face, but we do know that Giancarlo Stanton is 6 foot 6, that he is carrying a bat, and he has just been intentionally hit with a baseball. We also know that Jan looks nervous. She’s a cloudy mirror.

3. Kelsey was just hoping for a Giancarlo Stanton highlight.

4. and 5. This is the sort of polite concern that makes me think Marc and Janet are visiting LA from the Midwest, and aren’t sure of their obligations in this moment.

6. Riley: “Honestly, the thing that worries me is, impeachment is as much a matter of political will as it is anything else.”

9. Abigail smiled. It had been a long game, and nothing like what she had been led to believe. But it was finally happening. The fans would finally get their blood.

10. Austin Barnes has a very important question to answer very quickly: In the event that a bat-wielding, 6 foot 6, 245 pound Giancarlo Stanton charges his pitcher, how convincingly does he have to injure himself to avoid interceding without people thinking less of him?

11. Carlos Torres has just had the realization we all experience when a co-worker deletes part of the quarterly report: he has to do so much more of his job now. 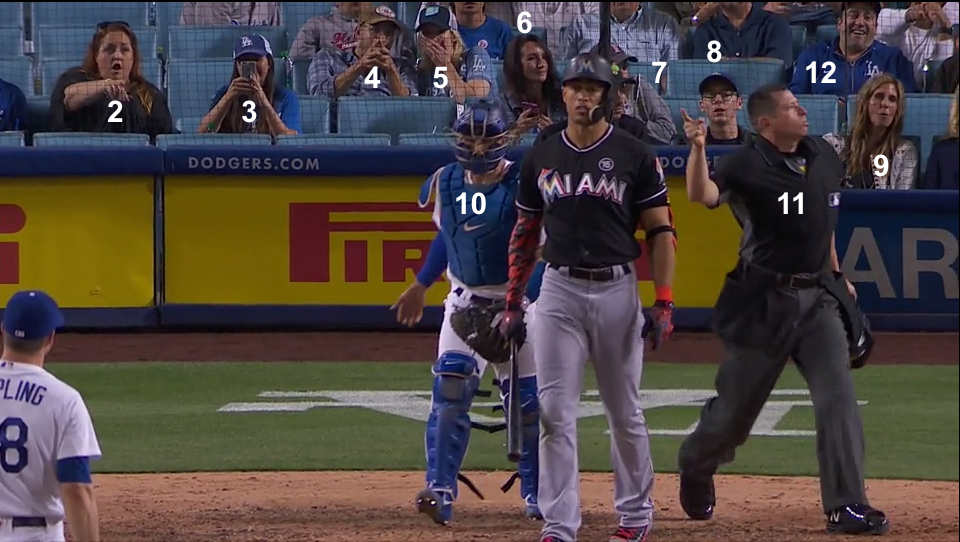 1. Rick is burping. I’m glad they didn’t show us that. It would be embarrassing for him.

2. Jan has done an important bit of math; Giancarlo still has his bat, and Ross has thrown his one weapon away. Jan feels a duty to warn him. Look out, Ross! Of course, Ross can see him. Giancarlo is probably all Ross can see. It’s possible that he has never been more aware of his size relative to another person’s than he is in this moment. But on the off chance Ross is distracted, it’s ok. Ross has Jan.

3. Kelsey is just hoping for a Giancarlo Stanton highlight.

4. and 5. Marc and Janet would like you to know that this is not how they do things in Waukesha.

6. Riley sees Dave Roberts begin to sprint from the dugout, aghast that his pitcher would suffer consequences for intentionally throwing at someone, and worries that our sense of decency and shame is hopelessly eroded.

10. Austin Barnes is wearing gear. He’s physically clad in armor. That has to count for something, right? Even if Stanton did try to go through him, he wouldn’t really feel it, right? His upper legs feel so naked and exposed all of a sudden.

11. Carlos Torres sighs. There’s going to be so much paperwork tomorrow morning, he just knows it.

12. A new face. This is Jim. Jim is amused because he knows Giancarlo means business. Of all your dad’s friends, Jim is your least favorite. Jim is the guy who sits back and says in a satisfied voice, “Oh you’re in it now” before watching you make avoidable mistakes as a young person.

On Keeping a Pitcher’s Notebook

“That lefty Travers,” the entry reads, “is most of the reason why the Toledo Mud Hens and I are separated today.” Clean road grays, clubhouse sofa, Indianapolis, 4:53 p.m., August, Saturday afternoon.

On Friday evening, Phillies radio commentator and former pitcher Larry Andersen recommended that Nick Pivetta—and other pitchers, especially young ones moving between the minors and the majors—keep a notebook. The suggestion was largely practical; a notebook is an excellent way to record important data about one’s own performance in one’s own particular idiom: which pitches are working best on which days, against which hitters? Where were the known mistakes and the known opportunities for correction? For a pitcher who may be in the position of balancing multiple kinds of successes and failures—the promotion and demotion cycle that so often hinges on more than one player’s performance—the pitcher’s notebook seems a worthy endeavor. But the radio clip was brief, scratching only the surface of such a potential notebook. Thus we turn to Joan Didion, sage advisor on the subject of notebooks.

Didion, of course, spends ample time interrogating the unreliability of such notebooks; the fallibility of memory and motive are central concerns of the essayist. She asks, “Why did I write it down? … How much of it actually happened? … It is easy to deceive oneself on all those scores.”

So it is with baseball—we spend our time as fans reliving this moment or that to reassure ourselves that we remember it correctly, though correctness and memory are not always close companions, and the act of collaborative memory is often a collaborative fiction.

But the pitcher’s notebook looks upon these questions in another way: Did the pitcher hit his spots and see hitters make still better swings? Or has memory nudged the recollection some inches inside or outside, the width of the catcher’s mitt’s webbing? One can double-check these memories now, certainly, but it’s the impulse that matters: seeing the ball where it was against the ego’s desire to see the ball where one wishes it was.

I remember wishing that I could stay in the show. “Someday you will,” he said lazily. “Someday it all comes.”

How to Combine Board Games with Baseball: Part 1

Fantasy baseball is fun and potentially profitable. But market research tells us that you, the reader, are thirty-four years old, which means that you’ve been playing the same fantasy sports for nearly twenty years now. It’s time for a change of pace. And that’s why Short Relief is bringing you the first in what will very probably be a one-part series: Board Game Fantasy Baseball. 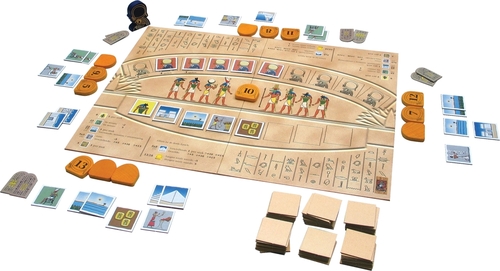 Explained briefly, the game of Ra is played as follows: each player has a certain number of gold tokens of different values they can use to bid on tiles. There are many different tiles which do different things, are are worth points based on the combinations or the relative number each player has. Some of the tiles score in each of the three rounds, while others are only counted at the end of the game. Most points, as often tends to be the case, wins.

On their turn, each player can add a tile to the center, increasing the value of the haul, or start an auction on what’s currently there. Sometimes, the tile they pull will force a bid to begin automatically. What makes the game interesting is the asynchronous values both in what players have to bid with and the tiles they’re bidding on: a prize may be worth far more to one player than another. The challenge is in measuring this relative delta in value, and getting the most out of the bids the player wins.

How does this relate to fantasy baseball? Well, it can relate to anything. All auctions are essentially games, where the bidders measure the value of the prize against the value of their bid, along with the desires of their opponents. In our case, the tiles on the board can easily be replaced by baseball players.

With that in mind, Fantasy Baseball Ra:

That’s it! Give it a shot. And if you don’t like it, buy a copy of Ra and just play that while the game’s on. It’s pretty fun, even if it doesn’t have enough baseball.