KANSAS CITY, Mo. — Aaron Hicks leaned forward at his locker and asked teammate Didi Gregorius about his tweeting. He wanted to know about the 140-characters-or-less game summaries Gregorius has been posting on Twitter after Yankees victories. Instead of using Hicks’ name, Gregorius has been using a certain emoji.

Gregorius, sitting nearby at a card table, laughed and put a look of pretend surprise on his face.

“Who are you supposed to be?” Gregorius asked, still pretending. “I mean, you’re Aaron Hicks!”

Hicks wasn’t letting him off the hook: “What’s my emoji?”

“An old man, an emoji he thought was hilarious,” Hicks said with a laugh. “I get the old man because I’m bald and I’m 27 years old.”

This was the tweet Gregorius published after the Yankees beat the Royals at Kauffman Stadium on Wednesday:

#StartSpreadingTheNews yankees win great start by #BigMike going 6+ and #ðŸ‘´ðŸ½ with 3run homer .. WHAT A GAME!!

“Big Mike” refers to right-hander Michael Pineda. The old man emoji without hair is Hicks. Let's take a closer look at Hicks and his suggested icon: 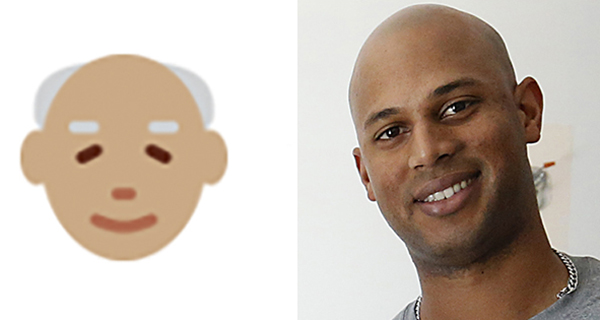 Sure! Anyway, Hicks gets the Twitter love because of his hot start this season. In the considerable shadow of another surprising Aaron (Judge), Hicks was slashing .311/.447/.589 with seven homers, 22 walks, and six stolen bases in 115 plate appearances coming into Friday. He's third on the club in bWAR, and his .338 TAv ranks 18th in the majors for players with at least 100 plate appearances.

Expected by most to be a backup after slashing .223/.299/.346 over nearly 1,300 plate appearances for his career, and hitting poorly in 2016, Hicks started producing in spring training and hasn’t stopped.

“I don’t want to be considered a fourth outfielder,” Hicks has said.

Yankees manager Joe Girardi has found at-bats for Hicks despite the presence of Judge, Brett Gardner, and Jacoby Ellsbury in the outfield, and Matt Holliday at designated hitter. Hicks manages to stand out in a crowd of alternatives, most of which are tenured beyond his years, not to mention pricey. Teams typically use three outfielders at once, of course, but Girardi said “it’s safe to say” the Yankees have four starting outfielders.

Hicks said playing time is up to Girardi, but that the Yankees “have a solid rotation” and that he’s getting the at-bats he needs to be consistent.

“He’s getting a lot of at-bats and we’ll continue to get him a lot of at-bats,” Girardi said. “Because I think it’s important for him, and because he has been so productive.”

It’s easier for Girardi to find Hicks playing time because of his ability to hit from both sides of the plate.

Hicks is a switch-hitter because of his father, Joe Hicks, a 12th-round pick of the Padres in 1975 who played eight seasons of pro ball. Hicks’ father had his vision “scrambled” and his career shortened by a bean ball, according to the St. Paul Pioneer Press. The circumstances of how he left the game gave Joe Hicks decidedly mixed feelings about baseball as a vocation. He preferred that his son play golf—and Aaron Hicks has become a scratch golfer—and only agreed to baseball around age 10 if the kid became a switch-hitter.

Both men are natural right-handed hitters, and Joe Hicks thought that by making his son hit lefty too, he would be safer. And, somewhat diabolically, that having to learn to hit lefty would make the game hard enough for Aaron that he would give it up for golf. Joe Hicks thought he had the “next Tiger Woods” on his hands, but Aaron was determined to stick with baseball.

Throughout the minors and much of his time in Minnesota, Hicks struggled as a left-handed hitter. He even briefly gave up switch-hitting in 2014, only to change his mind within weeks. This season Hicks is killing the ball from both sides, against both kinds of pitchers. His OPS against righties is 1.089. Against lefties, it’s .954.

“What my dad did, it helped me out,” Hicks said.

Hicks’ early season excellence is what the Twins probably had in mind when they took him 14th overall in the 2008 draft. The season Hicks turned 20 years old, Baseball Prospectus ranked him as the no. 26 prospect in MLB. Baseball America liked Hicks even more, ranking him 19th. He was considered something of an heir to the continuation of the Twins' tradition in center field, started by Kirby Puckett and Torii Hunter.

Hicks appeared to be catching on, but in 2016 the Twins were deep in the outfield with top prospects such as Byron Buxton and Max Kepler on the verge of getting their own shot. General manager Terry Ryan thought the Twins needed a catcher, the Yankees made John Ryan Murphy available, and a deal was struck. The Yankees gave Hicks 361 plate appearances, but he hit just .217/.281/.336.

Murphy hit .146 in 90 plate appearances for the Twins in 2016, which wasn’t good enough to make his defensive reputation worth it, because he started this season in Triple-A. Buxton, as Hicks’ replacement, struggled to legendary proportions over his first 162 games, as documented recently by Aaron Gleeman.

Hicks relates to Buxton, who was demoted to the minors twice in 2016, and started this season struggling as well. While he didn’t come in with quite the reputation (or baggage) Buxton had as the game’s top prospect, Hicks knows what it’s like to reach the majors and struggle to stay there.

“We spent a lot of time together, especially my last year with Minnesota in 2015, when Torii was there (as a special instructor),” Hicks said. “We talked a lot about hitting. He was, what, 21 when he got to the big leagues?”

One of the skills that got Hicks to the big leagues at 23 was his batting eye. Despite his overall struggles, there was at least one thing Hicks was doing at the plate: drawing walks. Hicks is 18th in walk rate this season, and while he might have been born with a keen eye, Hicks credits the Twins with making his selectivity a useful attribute.

“I think it came from experience,” Hicks said. “I remember when I was younger, I was always a free swinger. Once I got into pro ball, I became more of a patient hitter. I think that’s kind of how the Twins molded me into a player. I’m just a very selective hitter.”

As Jeff Sullivan noted at FanGraphs, how Hicks looks at pitches, and which pitches he selects to mash, has evolved. He used to take pitches just to take them, to get a vague idea of “what the pitcher was trying to do,” Hicks said. Though he’s never been big on swinging at pitches down in the zone, Hicks has taken his preference to an extreme this season. If the pitch is up, it’s much more likely than ever that he’s swinging.

“Now with the pre-work I do, I kind of have an idea of what they want to do against me, therefore I have an advantage,” Hicks said. “That replaces the whole patient approach I had before. Now, all I’m doing is looking for a good pitch to get the barrel on.”

His willingness to let bad pitches go might be Girardi’s favorite part of Hicks’ game.

“What’s more amazing to me than the home runs and RBIs is how patient he is and the amount of walks he draws,” Girardi says. “His on-base percentage is absolutely incredible.”

“Buxton is a phenomenal player and, in time, he’s going to become the player everybody thinks he should be,” Hicks said. “I think you’ve got to be patient with a young guy like that, because the next thing you know he’s 25 and he’s got things figured out.”

You need to be logged in to comment. Login or Subscribe
leites
Great story, thanks for doing it!
Reply to leites
jfranco77
Twins CF of the future, skipped AAA, yo-yo'd up and down after initial struggles, now thriving as a Yankee.

I can't wait for Byron Buxton's breakout 2022 season in pinstripes!
Reply to jfranco77