(All records and odds through Wednesday's games.) 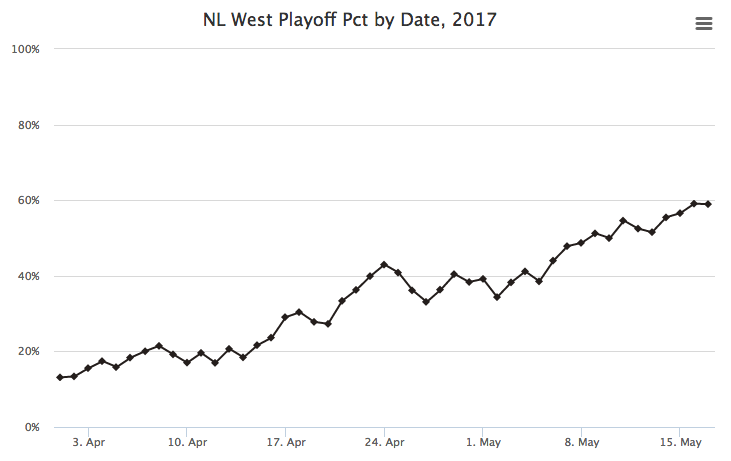 Nearly everyone—including PECOTA, Las Vegas, and BP’s staff predictions—expected another mediocre season for the Rockies, but instead they have a National League-high 26 wins in Bud Black's first season as manager. That’s a surprise, but even more shocking is that Colorado’s success has come despite the lineup (with the help of Coors Field) producing just the sixth-most runs in the NL. In the team’s 25-year history they’ve failed to be among the NL’s top five in scoring just once, 2008. Colorado scored the NL’s most runs in each of the past three seasons and has ranked in the top three each year since 2009.

In his Rockies season preview Wilson Karaman noted that defense has been an overlooked factor in the franchise's ebbs and flows. They’re currently 11th converting balls in play into outs after placing no better than 27th in any of the previous six years, which has done wonders for a young rotation that lost no. 1 starter Jon Gray to the disabled list after just three outings. No one older than 27 has started a game for the Rockies this season, and the rotation includes three rookies in Antonio Senzatela, Kyle Freeland, and German Marquez. It also ranks ninth in ERA after being dead last—by a half-run—from 2012-2016.

Colorado’s bullpen has been even better, thanks in large part to Greg Holland’s return to excellence in the closer role. Signed for $7 million as a free agent after being derailed by injuries, he’s a perfect 18-for-18 in save chances with a 1.02 ERA and 24/5 K/BB ratio in 17 innings. Jake McGee and Adam Ottavino have also thrived in setup roles, which helps explain the Rockies winning without bashing other teams into submission. Being skeptical of a pitching-and-defense approach in Colorado is fair, but they’ll get a boost from Gray’s return next month and my guess is the offense won’t lay this low for much longer. 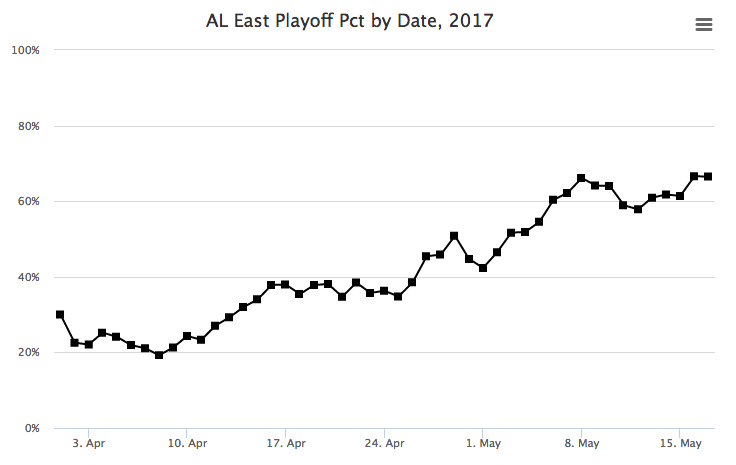 This was supposed to be another in-between season for the Yankees, who won 84-87 games in each of the previous four seasons and were perceived as still being a year or two away from serious contention. PECOTA, Las Vegas, and BP’s staff predictions each pegged them for slightly above .500 and second or third in the American League East. Postseason factors, certainly—with playoff odds at 30 percent—but a bit more mediocrity to experience before the stacked farm system began churning out more young stars to join Gary Sanchez. It turns out, the Yankees didn’t want to wait.

They’re leading the American League East at 24-14 to match their best start since 2003 and 25-year-old rookie slugger/human mountain Aaron Judge has jumped ahead of several higher-ranked prospects by hitting .320/.426/.740 with 14 homers. Starlin Castro is having a career-year long after his potential had seemed to fade, veterans Matt Holliday, Brett Gardner, and Jacoby Ellsbury are playing well, and Aaron Hicks might be having a delayed breakout season one year after being acquired from the Twins for J.R. Murphy. Add it all up and the Yankees lead the league in scoring after ranking 12th last year.

The pitching has also improved, going from seventh to second in ERA on the strength of Michael Pineda, Luis Severino, and a great bullpen. Yankees relievers have a 2.55 ERA that trails only the Indians, striking out 10 batters per nine innings and allowing an MLB-low five homers. Losing closer Aroldis Chapman to a shoulder injury hurts, but Dellin Betances is a top-five reliever and the Tyler Clippard/Adam Warren setup duo can get the job done in a bigger role for a month. Winning the division over the Orioles and Red Sox won’t be easy, but the AL East may be divvying up three postseason spots this year. 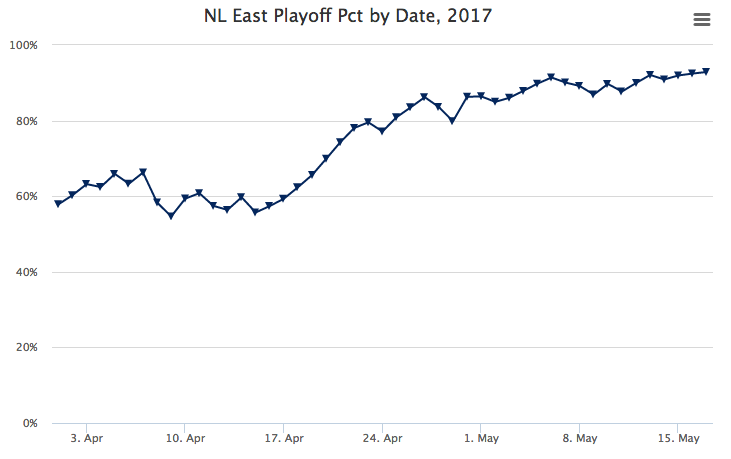 Washington entered the season as favorites to win the National League East and they’ve lived up to their end of the bargain with a 25-15 start while the rest of the division is a mess. Expected to be the Nationals’ biggest challengers, the Mets have instead seen their playoff odds drop more than any other MLB team. The division’s four non-Nationals teams are a combined 60-95 and all at least five games below .500. Or, put another way: If the Nationals simply play .500 baseball for the remainder of the year, the Mets would need to go 71-52 (.577) just to tie them.

Bryce Harper has been incredible, hitting .376/.491/.744, and Ryan Zimmerman is almost keeping pace at .374/.417/.763, which is one of the most remarkable stories of the young season. Free agent pickup Matt Wieters has a career-high .823 OPS, last year’s free agent pickup Daniel Murphy continues to be an elite bat, and Jayson Werth and Anthony Rendon have played well. Trea Turner has mostly struggled and the loss of Adam Eaton is a huge one, but the Nationals’ lineup has scored MLB’s most runs while managing to be in the middle of the pack defensively as well.

Washington’s pitching staff has been much less impressive and the bullpen has been a disaster. In fact, if the path to the division title proves to be as smooth as the BP playoff odds suggest, the Nationals’ biggest goal for the final three-quarters of the season is to identify or acquire multiple relievers they can count on in the late innings. There are other important things to watch over the next four months, like keeping the starters’ workloads in check, keeping the hitters healthy, and perhaps finding an Eaton replacement, but one way or another the Nationals’ bullpen is going to look much different come October. 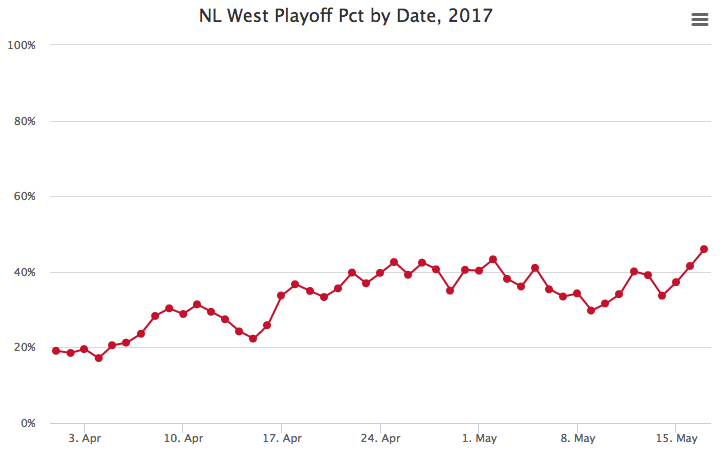 It’s mid-May and the Dodgers are on pace for 90-plus wins. That part was expected. They’re also in third place, because in addition to the aforementioned Rockies, the Diamondbacks are also making a lot more noise than expected in the National League West. Last year’s 69-93 record gave way to a much-needed regime change, but only a few significant roster moves followed. One of them, swapping Jean Segura for Taijuan Walker, has been at best a wash, and another, signing Fernando Rodney as the new closer, has led to a lot of fans covering their eyes in the ninth inning.

In-house, holdover talent bouncing back and/or taking major development strides has been the driving force behind Arizona’s early success. Zack Greinke looks like a $200 million ace again, and Jake Lamb, Brandon Drury, Yasmany Tomas, and Chris Owings have formed a nice 27-and-under offensive nucleus around consistent superstar Paul Goldschmidt. A.J. Pollock looked like old self before suffering another groin injury and his uncertain status looms large, but so far the Diamondbacks have a top-three offense and a top-three pitching staff among NL teams.

Defense has played a huge role in the turnaround. Arizona was dead last turning balls in play into outs last season, but is now middle of the pack. They changed catchers, making pitch framing a priority. Last year’s catchers (mostly Welington Castillo, with some Chris Herrmann and Tuffy Gosewisch) ranked 26th in framing runs at -16.1. This year’s catchers (mostly Jeff Mathis and Chris Iannetta, with some Herrmann) rank seventh in framing runs and are on pace to be nearly 30 runs better than 2016. Arizona’s pitching staff leads the league in strikeouts and has shaved 1.30 runs off last year’s ERA.