While it’s surely been impossible for Lance McCullers to forget longtime friend Jose Fernandez since Fernandez’s tragic passing last fall, the memories were fresh as ever when the Astros’ hurler made his first career start in Miami. As he’s done in every start this season, the 23-year-old wrote ‘16’—Fernandez’s number—in the dirt behind the pitching mound and put on a glove with Fernandez’s name inscribed on the side. This time around, McCullers also donned shoes custom-made for the start, when he’d finally be toeing the rubber on “Jose’s mound.” 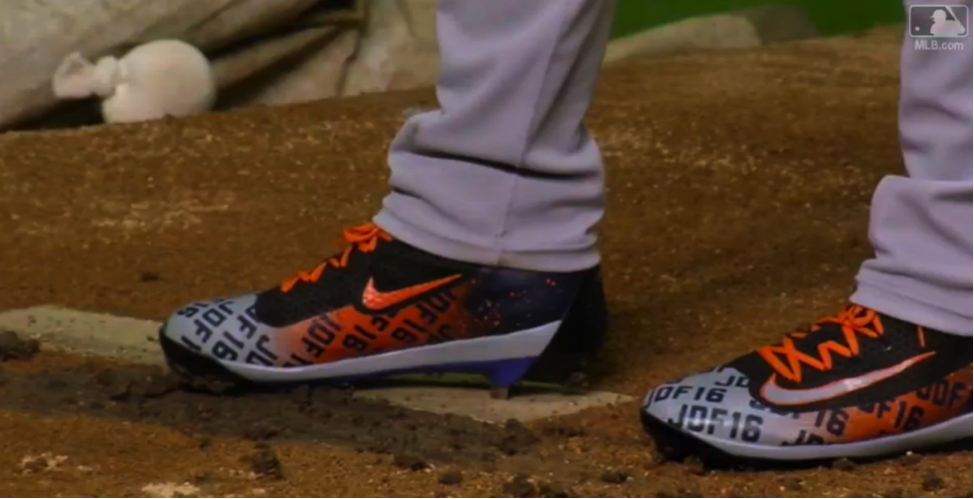 Then, in perhaps the best tribute to Fernandez possible, McCullers fired six dominant innings of shutout ball, allowing just three hits and two walks while striking out three. McCullers extended his scoreless-inning streak to 22. It’s not hard to see how McCullers has been so challenging to square up this season, pairing a mid-90s fastball with an unconventional 90 mph changeup and absurd knuckle-curve which he throws nearly half the time.

Despite being dogged by some health issues over his short big-league career, McCullers has pitched like a top-of-the-rotation starter in his 45 career outings. With health, there’s every reason to expect him to continue doing so going forward.

Thanks to McCullers and the Astros’ excellent bullpen, Houston didn’t need much offense to seal the win. Regardless, Jose Altuve went out of his way to give the Astros a lead, hitting two doubles and two triples. The first Astro ever to accomplish that feat, he—along with George Springer and a two-run double of his own—guided the Astros to a clean 3-0 victory.

Amidst a frustrating and demoralizing 0-6 skid, the Mets needed Matt Harvey to turn back the clock and pitch like his old self, to save them from two straight sweeps by way of the Brewers and Diamondbacks. The good news is that, compared to the rest of his season, Harvey was better than usual on Wednesday. The bad news is that "better than usual" is an awfully low bar to clear, considering the 5.63 ERA he held going into his latest start. Harvey ended up giving up three runs in his 5 1/3 innings of work, and that, along with a run tacked on in the seventh inning, was enough to tie the game at four going into extra innings.

There, often disparaged manager Terry Collins made the controversial decision to call in Rafael Montero, and it’s not hard to see why many fans grew red in the face by that move: Montero’s made 10 appearances for the Mets this season and allowed runs in half of them. The former top prospect couldn’t buck his trend of struggles on Wednesday night, as the first batter he faced, Chris Herrmann, crushed a fastball to center field for a walk-off home run.

As Harvey so aptly put it after the game: “I think we’re ready for an off day.”

The other extra-inning game on Wednesday went a couple innings deeper, as the Red Sox battled the Cardinals into the 13th. The Cardinals got off to a strong start in this one, jumping up 4-0 after two innings thanks to a Dexter Fowler solo home run and hits from Magneuris Sierra and Kolten Wong (as well as a Tommy Pham groundout). They were able to hold the lead through six strong innings from Mike Leake, though he faltered in the seventh frame by giving up a two-run home run to Jackie Bradley.

The Red Sox continued scoring runs the next inning, as Trevor Rosenthal allowed the lead to evaporate via a Xander Bogaerts RBI triple and Andrew Benintendi sacrifice fly. Both bullpens held steady for the next five innings, until Chris Young singled in Mitch Moreland to score the go-ahead run in the top of the 13th.

The Braves pulled off a lopsided 8-4 win over the Blue Jays on Wednesday, but despite the final score it may not have felt like a victory. Atlanta was dealt a brutal blow in the fifth inning, when Freddie Freeman departed following a hit by pitch.

After breaking out in 2013 to become one of the better hitters in baseball, Freeman broke out a second time last year by having the best season of his career. Somehow, it looks like there is more left in the tank—enough for a third breakout even—as Freeman was off to one of the hottest starts in the MLB this season. It would be a massive setback to the Freeman, the Braves, and, frankly, all of baseball if he misses substantial time with an injury, but we’ll have to wait on the answer to that as x-rays were inconclusive.

More drama occurred later in the game, though, starting with a quick pitch by Jason Motte that wasn’t taken too kindly by its victim, Kevin Pillar. Pillar, struck out by the pitch, called Motte a choice word which I won’t repeat here, one that sparked a brief clearing of the benches. The outfielder summed up his reaction after the game: “It was immature, it was stupid, it was uncalled for.” (It was also allegedly homophobic.)

Tempers weren’t completely cooled, as Jose Bautista uncorked a bat flip after an eighth-inning home run. Considering the Blue Jays were still in a four-run hole following the solo shot, the flip wasn’t a showing of celebration, but instead some sort of … payback (?) toward the Braves for the earlier quick pitch. Bautista exchanged some words with Braves catcher Kurt Suzuki at home plate following the home run, sparking the benches to clear again.

My complete apathy toward these rather peaceful benches-clearing brawls is apparently shared by a certain Clayton Kershaw. See if you can spot Kershaw in the chaos of this pow wow between the Dodgers and Giants near home plate. 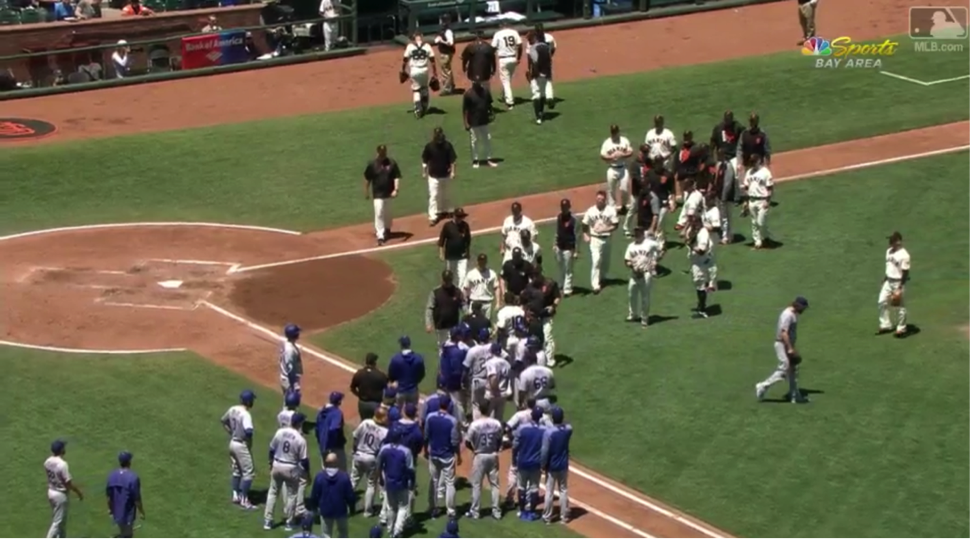 Kershaw just wanted to focus on pitching, and focus he did, turning in a classic Kershaw game against his division rival by throwing seven shutout innings. The southpaw allowed just three hits while striking out five.

The Dodgers supplied more than enough offense to get the 6-1 win, with players such as Cody Bellinger (two doubles), Yasiel Puig (two-run single), and Yasmani Grandal (two-run double) pitching in.

After a rough 13-20 start to the season, the Rangers have been on an absolute tear, outscoring opponents 51-20 over an eight-game winning streak. They didn’t let up on Wednesday, trouncing the Phillies to the tune of a 9-3 win. Their biggest contributor in the victory was Jared Hoying, a 28-year-old rookie who went 4-for-4 with a home run in his second game of the season. The former 10th-round pick also showed off his glove, making an excellent play in center field.

Andrew Cashner turned in yet another excellent performance on the mound by throwing seven innings of two-run ball, but the best story of the game belonged to yet another "veteran" rookie: Austin Bibens-Dirkx. Bibens-Dirkx was drafted back in 2006 by the Mariners and had appeared in over 400 minor-league games for 20 professional teams before joining the Rangers as a 32-year-old rookie. His big-league debut may not have gone exactly as planned—Bibens-Dirkx plunked the first batter he faced and allowed one run over an inning—but it’s still an incredible feat of perseverance that finally paid off.

Mike Trout hit a home run off Anthony Swarzak. It was, perhaps, the most shocking moment of the night. Yes, I’m talking about the same Swarzak who had a 5.52 ERA for the Yankees last season. That Swarzak had been baseball’s best relief pitcher until last night, throwing 19 2/3 innings and allowing just four hits, two walks, and no runs. Getting on base was a feat that only the most esteemed hitters in baseball achieved. And scoring a run? Well, that was unheard of, maybe only reserved for a god-like entity. Alas, much to the chagrin of Swarzak and the White Sox, Trout is exactly that, and he had no problem depositing a slider beyond the center field wall for a three-run home run, his fifth in six games.

A walk-off catch sounds far more exciting than it actually is, considering that’s exactly what ends the majority of ordinary baseball games, but Kevin Kiermaier made a normally mundane event spectacular by robbing Jason Kipnis of a home run to give the Rays a 7-4 win.

What to Watch for Thursday

If you were subjected to Ubaldo Jimenez’s struggles on Wednesday, consider Dylan Bundy outing a palate cleanser. The former top prospect has pitched like an ace to start this season, and will look to continue doing so against the Tigers at 1:10 pm ET. Throwing at the same time is Ervin Santana, who will carry an MLB-best 1.50 ERA into his start against the Rockies.

Other pitchers worth watching are Jon Lester against the Reds at 2:20 pm ET and Danny Duffy vs. the Yankees’ red-hot offense at 8:15 pm ET. An intriguing big-league debut will come from Hector Velasquez, a Mexican-league star whose contract was purchased by the Red Sox this offseason, as he throws against Sonny Gray at 10:05 pm ET. Marcus Stroman vs. Julio Teheran will be required watching as there could very well be some extracurriculars following Wednesday’s multiple benches-clearing … events (there’s no real good way to describe a bunch of grown men running onto the field, standing there awkwardly, and then returning to the dugout).

You need to be logged in to comment. Login or Subscribe
NeauxBrainers
That was a great game-ending catch by Kiermaier, but the game was not over yet. Nearly a minute went by, as the umpire waited for Kiermaier to celebrate with his outfield teammates and begin the walk back toward the dugout.

All that time, the umpire never took his eyes off Kiermaier's glove. Neither I, in the seats near first base, nor the umpire running into the outfield to watch Kiermaier's catch, had yet to see the ball, which disappeared when Kiermaier leaped and thrust his glove above the top of the fence.

Only when Kiermaier noticed the waiting umpire did he open his glove to reveal the ball. Nice work, ump.
Reply to NeauxBrainers