To slightly tweak a well-worn saying, you can't win a playoff spot in the first quarter of the season, but you can lose it.

The following four teams have seen their BP Playoff Odds decline the most since Opening Day, through slow starts, crowded disabled lists, and various other calamities. Let's take a closer look at how each team fell so far so fast, as well as how they might climb out of the early hole with three-quarters of the season left to play.

(All records and odds through Tuesday's games.) 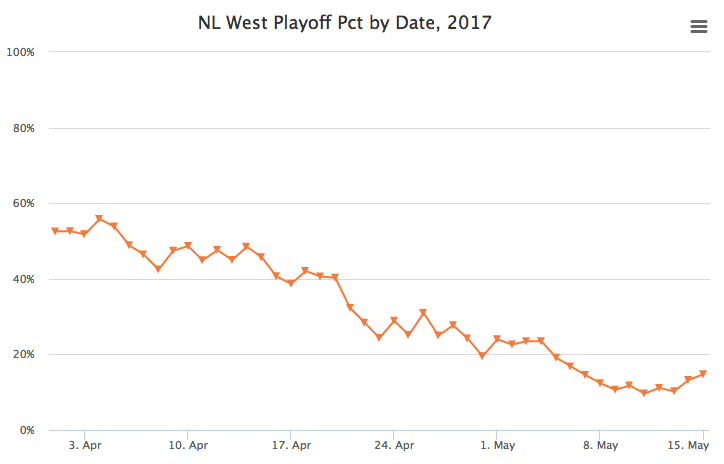 San Francisco began this year as the most popular second-place pick in the National League West, with BP’s playoff odds giving the Giants an 18.4 percent chance to win the division and a 34.1 percent chance to claim a Wild Card spot. Six weeks later their overall playoff odds have plummeted from 52.5 percent to 17.1 percent due to an ugly 17-24 start that included ace Madison Bumgarner suffering an off-field injury that figures to knock him out until at least the All-Star break. New closer Mark Melancon, signed for $62 million to rescue the bullpen, joined Bumgarner on the disabled list after throwing just 11 innings.

Bumgarner is hurt, the expensive quartet of Johnny Cueto, Jeff Samardzija, Matt Moore, and Matt Cain has combined for a 4.80 ERA, and the pitching staff as a whole is 24th in both ERA and DRA (including 20th for starters and 24th for relievers). They also haven’t been helped by a defense that ranks 27th at turning balls in play into outs. Yet as bad as the pitching and defense have been, the offense has been worse. Buster Posey is still amazing, hitting .379/.455/.595, but everyone else has hit .217 with a .331 slugging percentage. (Bumgarner’s career SLG is .324.) Only the Royals have scored fewer runs.

Simply climbing back to .500 without Bumgarner would be an accomplishment, although Cueto is capable of carrying a rotation, Melancon just rejoined the bullpen that showed some signs of being solid, and the offense … well, it can’t be this bad all season (probably). The good news is that BP’s playoff odds still give the Giants a 17.1 percent chance to make the postseason, almost all of which is riding on grabbing a Wild Card spot. That’s higher than six other National League teams, even if frustrated Giants fans can be forgiven for thinking it should be closer to 1.71 percent. 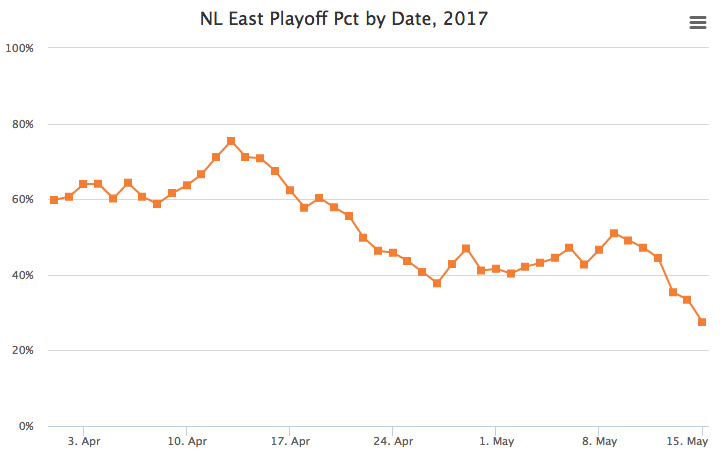 Like the Giants, the Mets were the most popular pick to finish second in their division, and that’s actually where they sit right now, albeit in a much different way than expected. One out of every five BP staffers predicted New York would win the National League East, and BP’s playoffs odds pegged the Mets at 41.3 percent to win the division and 18.5 percent to take a Wild Card spot. Thanks to their 16-22 start and tons of injuries, the overall playoff odds have dropped from right around 60 percent to below 25 percent … but even 24.5 percent is higher than half of the other MLB teams. (Try convincing a Mets fan of that.)

If you wanted to stretch the Giants/Mets comparison further, you could equate losing Bumgarner to losing Noah Syndergaard and give Jacob deGrom credit for similar rotation-carrying ability as Cueto, but then it starts to fall apart because New York’s closer, Jeurys Familia, is possibly out for the year. New York’s crowded disabled list also includes David Wright, Yoenis Cespedes, Travis d’Arnaud, Steven Matz, Seth Lugo, and the most recent addition, Asdrubal Cabrera. Matt Harvey is a mess, on and off the field, and it’s asking an awful lot for Michael Conforto to play the Posey role of leading an aging lineup.

Giving the Nationals a nine-game head start makes the division title a pipe dream, but with the Rockies, Reds, Brewers, and Diamondbacks accounting for four of the National League’s seven winning teams so far the Wild Card spots are definitely wide open. If the Mets can get even sort of healthy they clearly have the talent to turn things around and make a run, but at the moment it’s awfully hard to envision an empty disabled list in New York. Healthy or not the defense is a huge problem and the pitching staff has MLB’s only ERA above 5.00, with the rotation turning especially sour after projecting as the biggest strength. 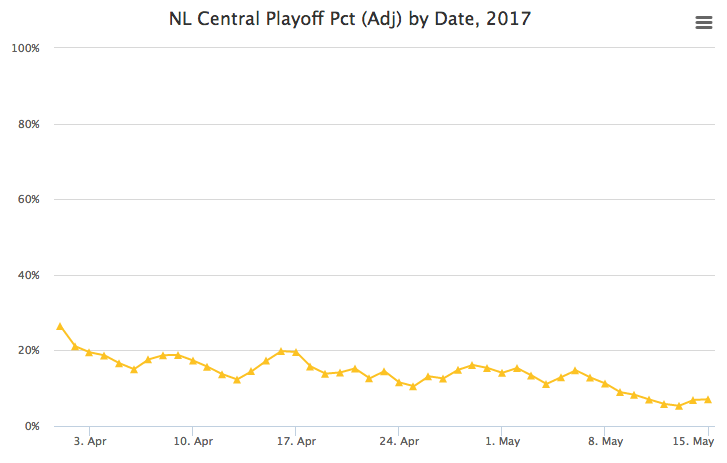 Whereas the playoff odds still give the Giants and Mets a decent shot to play in October, the Pirates have all but torpedoed their chances already. In fairness, their chances weren’t as good to begin with—coming off a very disappointing 78-win season, their starting point was 17.1 percent to win the division and 18.9 percent to secure a Wild Card spot. They’re now down below 10 percent, ranking ahead of only the Braves, Marlins, Phillies, and Padres among National League teams. Pittsburgh has a 72-90 record in its last 162 games and has been one of the worst teams in baseball since last August.

Andrew McCutchen’s plans for a bounce-back season have seen him instead decline even further, hitting .206/.280/.390 for a 100-point dip in OPS from what was already a career-worst mark and rating poorly on defense again after moving back to center field. Starling Marte is suspended until after the All-Star break, Jung Ho Kang may not play at all in 2017, and Jameson Taillon is out indefinitely following surgery for suspected testicular cancer. John Jaso has been abysmal, Gregory Polanco has regressed, and young starters Tyler Glasnow and Chad Kuhl have combined for a 6.87 ERA.

There have been some bright spots, like Gerrit Cole returning to form, Felipe Rivero looking like a brilliant pickup in the Mark Melancon trade, pitching coach Ray Searage continuing to work his magic on Ivan Nova, Josh Harrison showing signs of life, and Josh Bell holding his own as a rookie. However, the Pirates’ window for contention seems very tight right now. Pittsburgh has too much young talent already on hand to view this as a true rebuilding project, but the Pirates may need to regroup a bit before attempting to make another multi-year run with a different, McCutchen-less core. 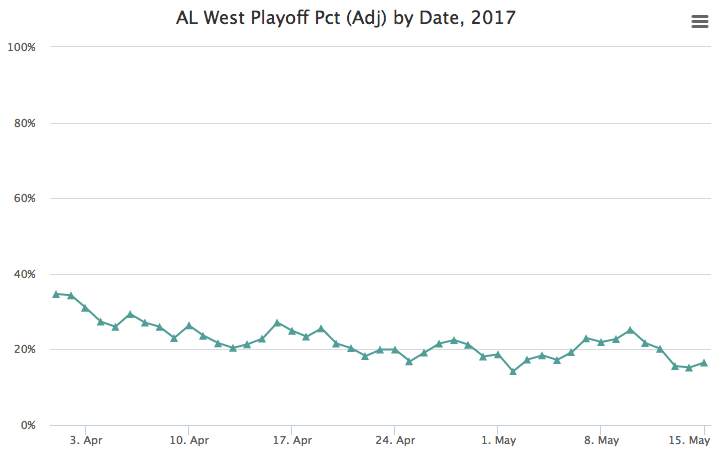 The three biggest playoff odds declines belong to National League teams, leaving the Mariners as lone American League team to fall at least 20 percent. Seattle was hardly a consensus pick to make the playoffs coming into the season, as the majority of BP’s staff pegged them for second or third place in the American League West and fewer than 10 percent of respondents had them winning the division. Their opening playoff odds were similar, at 21.8 percent for the division and 25.4 percent for a Wild Card. The surprise has been that the supposed team strength of pitching and defense has instead been a huge weakness.

Lots of offseason attention was paid to general manager Jerry Dipoto investing heavily in outfield range, but Opening Day center fielder Leonys Martin was designated for assignment after 15 games and Seattle is 23rd in park-adjusted defensive efficiency while ranking in the middle of the pack on fly balls. There are bigger issues than the defense, namely four-fifths of the rotation (Felix Hernandez, James Paxton, Drew Smyly, Hisashi Iwakuma) being on the DL and Edwin Diaz pitching his way out of the closer role that he seemed destined to fill for the next decade. Seattle has allowed the AL’s third-most runs.

The lineup has saved the Mariners, ranking among the league’s top five in AVG, OBP, and SLG, but even that is now on shaky ground with Robinson Cano and standout rookie Mitch Haniger on the disabled list. If the offense can’t keep carrying them until the rotation gets healthy the whole thing will unravel, and yet for some reason I still think the Mariners have some contention ahead. Obviously winning the division is out of the question, but Seattle is only three games out of a Wild Card spot and has a decent run differential of -2, whereas the Giants, Mets, and Pirates have been out-scored by a combined 122 runs.