There’s always a certain level of risk involved when a top prospect makes the final leap to the big leagues. No matter how the scouting reports sparkle or how inflated the minor-league stats appear, it’s hard to breathe easy until that first strikeout or home run is in the books.

The Cubs appeared to have no such qualms on Saturday when they called up their no. 2 prospect Ian Happ from Triple-A Iowa. It was a move made out of necessity given the club’s injury-ravaged outfield and infield situation, but one that continued to pay off throughout the afternoon.

Happ struck out swinging in his first at-bat, but recovered to draw a walk in the third inning. His big moment came in the fifth, when he lashed a line drive into right field, which might have counted as his first major-league hit had first baseman Matt Carpenter not attempted to field the ball.

The Cubs’ misfortunes multiplied in the next at-bat when Anthony Rizzo grounded out to second. Happ attempted to slide through second base to break up the double play and was ruled out after the umpire called slide interference on the dive.

The ruling raised the hackles of Chicago manager Joe Maddon, who unsuccessfully petitioned to have the call overturned. While the play cost the team two baserunners, Happ returned in the seventh with a spectacular, official big-league hit, mashing a Carlos Martinez changeup 413 feet into the right field bleachers:

Despite Happ’s heroics, the Cubs dropped to .500 with the 5-3 loss. It’s a good look for the top prospect, however, and one that should inspire confidence going forward. With Jason Heyward, Jon Jay, Ben Zobrist, and Kris Bryant expected to return within the month, Happ’s status is up in the air, but that’s not to say the Cubs won’t find a way to keep him around.

“If he keeps doing what he looked like, it’s hard to say that you don’t want him here longer,” Maddon told reporters on Sunday. “There’s other ways to fit him in.”

Chris Sale struck out 12 batters on Saturday. That’s good—great, even—but for a pitcher of Sale’s caliber, fairly routine. In fact, it was the seventh consecutive outing in which he racked up at least 10 strikeouts, coming just one 10-plus-strikeout appearance shy of the all-time record established by Pedro Martinez in 1999 (and, naturally, tied by Sale in 2015).

Still, there are plenty of reasons to marvel when your team’s ace can paint a strike zone as pretty as this one: 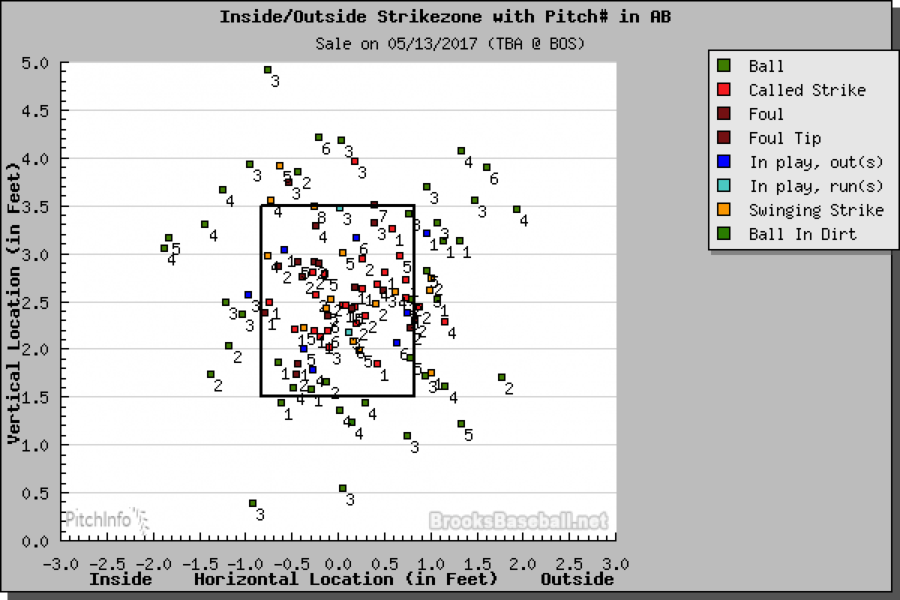 Despite his dominant performance, Sale didn’t entertain thoughts of a no-hitter for long. Logan Morrison logged the first hit and run of the game with his 10th home run of the season, a 393-footer that cleared the right field wall in the second inning:

Sale recovered to strike out the side in the third and kept the Rays’ bats quiet until the fifth inning. Derek Norris drew a two-out walk, setting Kevin Kiermaier up for a two-run homer and the Rays’ last two runs of the night. From there, it was smooth sailing: the left-hander whiffed two more batters in the sixth and caught Tim Beckham swinging in the seventh for his 12th and final strikeout of the evening.

By the 17th inning of Friday’s marathon between the Reds and Giants, there were more seagulls than baseball fans watching the game. The crowds that comprised the Giants’ recorded attendance figure of 41,325 had petered out, leaving a faithful few behind home plate and in the outfield bleachers, where the wind cut in from McCovey Cove as the game lagged well past midnight.

With one out and nobody on, Buster Posey swung at the first pitch from Reds’ right-hander Robert Stephenson. Perhaps it looked like a good pitch or perhaps he was just impatient for the game to end. It didn’t matter. The ball traveled an estimated 431 feet and dropped into the left field stands for Posey’s sixth home run and first walk-off blast of the year, releasing a palpable wave of relief through A&T Park.

After solid performances from starters Scott Feldman and Johnny Cueto, the two teams reached an impasse in the fifth inning when Denard Span singled in a run to knot the score, 2-2.

It only took 11 scoreless innings, 15 pitchers, seven pinch-hitters, and a whopping 491 pitches to break the tie. Posey’s walk-off homer capped the Giants’ ninth-longest game (by innings) in franchise history, well under the 23-inning record set by the 1964 Giants during an 8-6 win over the Mets. At five hours and 28 minutes, it was their 11th-longest game (by minutes) in club history, again falling short against the 1964 Giants’ seven-hour, 23-minute mark.

“The first thing I really remember,” Chris Iannetta told reporters on Sunday, “is getting hit in the face.”

That’s not exactly what you want to hear from your starting catcher, especially after watching him take a 93 mph fastball to the nose and mouth. Iannetta suffered the injury during Friday’s 11-4 win over the Pirates, when right-hander Johnny Barbato saw this pitch get away from him … 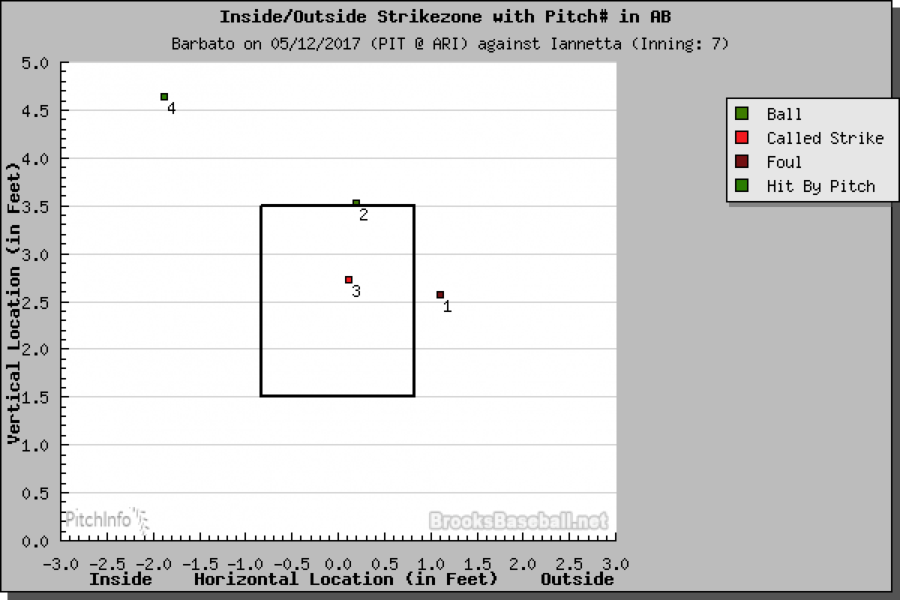 … and clocked Iannetta square in the face.

Warning: the video below is graphic.

The bad news: Iannetta was taken to St. Joseph’s Hospital in Phoenix, where he was treated for a split lip and several fractured teeth. It’s unclear whether his broken nose stemmed from the hit by pitch or a prior incident, though his comments on Sunday suggested the latter.

The good news: Although Iannetta was placed on the seven-day concussion disabled list, the move appears to be purely precautionary as a full evaluation failed to reveal any concussion symptoms. The Diamondbacks trotted out backup backstop Jeff Mathis on Saturday and Chris Herrmann on Sunday. Mathis went 2-for-4 with a double during Arizona’s 4-3 loss, while Herrmann went 0-for-4 with a walk the next day.

No one—not Carlos Santana, not the 1-2 fastball he lifted to dead center field, not even the immovable center field wall—stood a chance against the pure force radiating from the form of Byron Buxton:

A close contender, not for his defense but for his daring exploits on the field, was this uninvited participant in Saturday’s Indians-Twins contest:

Two hurlers with sub-2.00 DRAs, 2.0+ WARP, and one of the most dominant offensive drives in the American League? Yes, please. Chris Archer is set to take the hill for the Rays on Monday evening, while the Indians’ Carlos Carrasco will hunt for his third consecutive win after tossing two gems against the Blue Jays and Tigers this month (6:10 ET).

Over in the National League, the Marlins’ Dan Straily will play host to the visiting Astros, who come to town for a three-game series led by right-hander Joe Musgrove. If you can, try not to stare too hard at Musgrove’s 8.57 DRA—he worked six solid innings against the Braves last week, pairing a season-high three walks with two runs and four strikeouts during the Astros’ 4-2 win (7:10 ET).