The Tigers' bullpen allowed a 5.71 ERA through Saturday. That’s bad. It blew eight saves. That’s bad too. It allowed 38 percent of inherited runners to score, which is bad, particularly since it inherited 56 of them (the MLB average is 49). It allowed an .819 OPS, 5.19 FIP, and 5.64 DRA. Let me go through those figures one at a time. They are bad, bad, and bad, respectively.

As a result, Tigers fans are freaking out.

And, to be fair, there’s justification. Last season, the Tigers' starters had an ERA of 4.25 compared to the major-league average of 4.34. So they were better than average. Do you know the last time the Tigers' relievers—playing in a relatively weak division, remember—had a better-than-average ERA? It was 2006, when the closer was Todd Jones (hasn’t pitched since 2008) and the primary setup man was Joel Zumaya (hasn’t pitched since 2010, though he’s three years younger than Francisco Rodriguez).This year’s Tigers entered the ninth inning with a lead 20 times through Saturday, and they won only 85 percent of those games. The major-league average is 95 percent.

But one can make an argument that the Tigers don’t have the worst bullpen in baseball. In fact, I’m going to.

One of the features of modern bullpens is that their statistics are generally superior to those of starters. That makes sense. Starting pitchers pitch multiple innings, while the typical reliever pitches one. Even taking into account that most relievers are failed starters, their limited playing time yields better results. 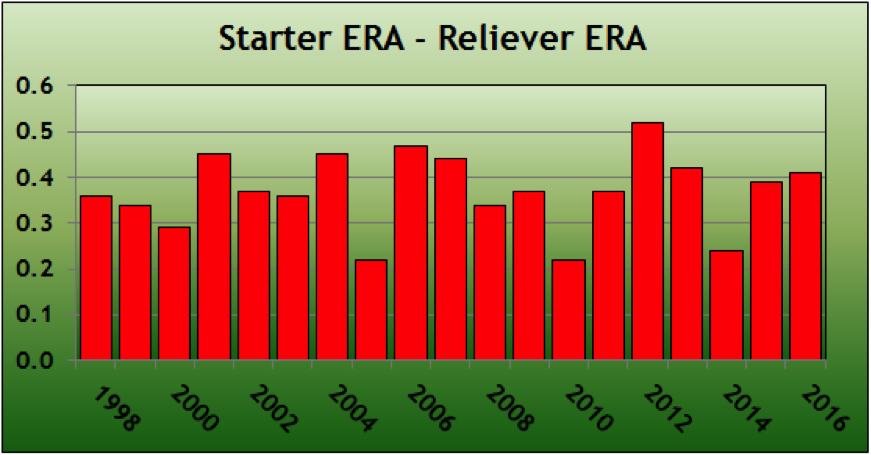 So it’s unusual, if not unprecedented, for teams to have a bullpen ERA higher than the starters’ ERA. Here’s a scatter plot, comparing starter ERA to reliever ERA for the 570 team seasons since 1998. 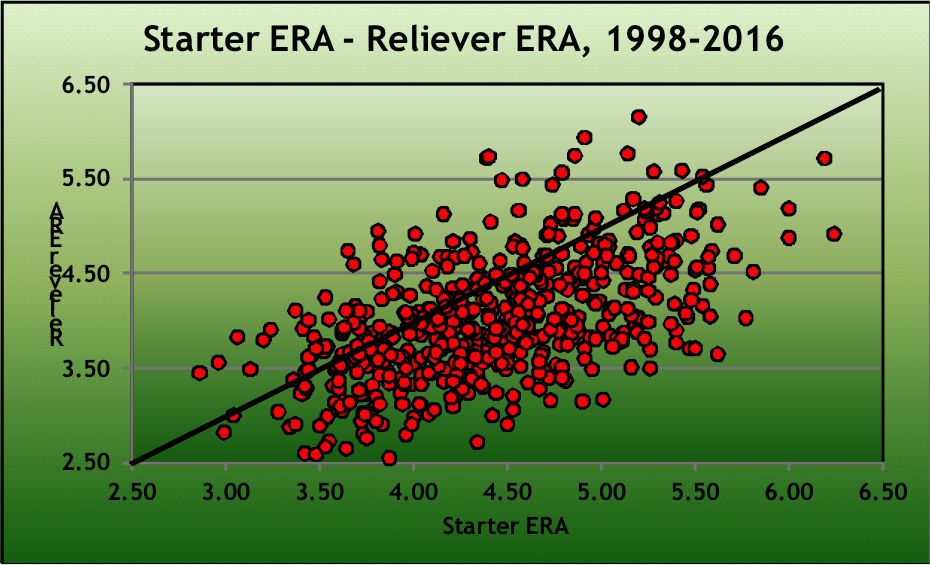 The dots above the diagonal line represent teams with a reliever ERA higher than the starter ERA. Only 132 of the dots—23 percent—are above the line. So for over three quarters of all teams, starters finished the year with a higher ERA than relievers.

I’m going to show you that last graph another way, just listing the difference between starter ERA and reliever ERA for teams for which the latter is higher than the former. 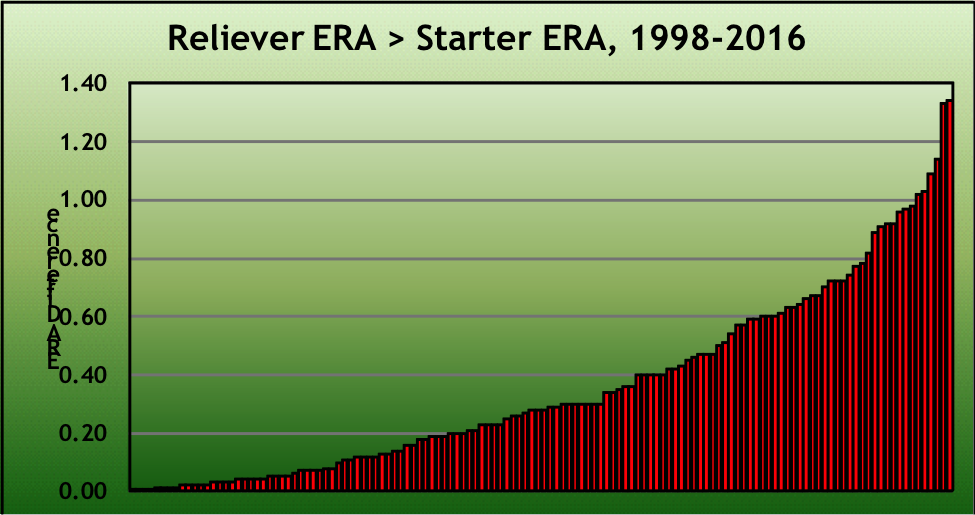 Why have I told you all of this? Because I want to show you the same chart as above, but with 2017 teams included, through games of Saturday night. 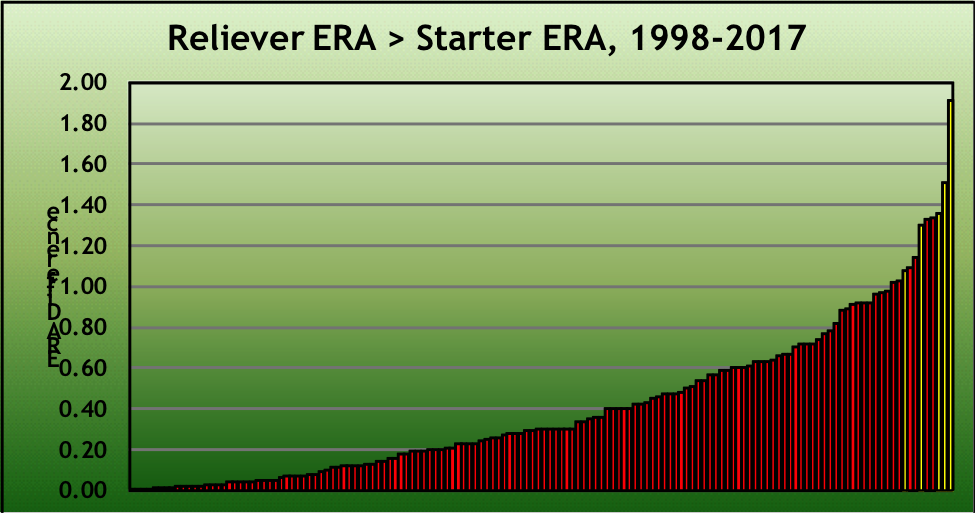 In all, there are 12 teams so far this season whose bullpen ERA exceeds the starter ERA. I’ve highlighted the five outliers, with an ERA differential of greater than a run:

(Mariners, Orioles, and Rays fans wondering where your team is: They’re close!)

Now, you might argue, the difference between starters and relievers isn’t as important as the absolute value for relievers. And, by that measure, the Tigers’ bullpen ERA to date is the worst in the majors. But is that the right way to look at it? A bad bullpen is one that is bad relative to the rotation. The Phillies’ starters have a 4.76 ERA, the relievers 4.66. That’s a bad bullpen ERA, fourth-highest in the National League. But does it suggest a bad bullpen or one that’s in line with its rotation? It’s not like the team’s been sabotaged by its bullpen.

Fans of the five teams listed above may have a different view of things. (Though, honestly, Nationals fans, your team has the best record in the National League, so you really should stop complaining.) Of course, today is May 15, and there is still a lot of baseball to go. In all likelihood, we’ll get regression to the mean, and the teams that’ve been extreme outliers so far are less likely to be so by the time the season ends.

What can we learn from this?

There’s reason to be optimistic about the Detroit bullpen anyway. Francisco Rodriguez has given way to Justin Wilson, who has struck out 26 and allowed only eight baserunners in 15 2/3 innings to start the season. Through Saturday’s games, the Tigers' relievers have a 3.67 ERA in May compared to a league average of 3.72.

The Rangers, though. They’ve followed up their 4.85 April ERA with a 6.19 thus far in May. They have only three relievers with ERAs below 3.00; one of them’s on the DL and one is striking out fewer than 10 percent of the batters he’s faced. The Tigers' bullpen may have the reputation, but the Rangers' relievers are putting up the performance. The Texas bullpen looks like the worst in the majors so far.