The en vogue way to play Marco Polo among baseball nerds is to yell “pitch framing!” and listen for “no longer offers a significant edge!”

There isn’t anything wrong with that statement. As a denizen of this generally useful, insightful echo chamber, I’m not disputing the overarching point: The worst (employed) pitch framers are substantially closer to the best pitch framers than they were even three years ago, and the gap might continue to shrink. Gaining a thousand-strike leg up on outwitted competition simply isn’t happening now. It was and is a smart observation, thoroughly borne out by the numbers on a league-wide basis and reinforced by the transparent actions taken when the final bastions of stat-averse talent evaluation fell this offseason.

But in our haste to pin down the things we are seeing, language sometimes takes our brains down a road the original, correct discovery didn’t map out. In this case, the common refrain on the narrowing band of framing talent levels obscures, or at least glosses over, the difference a framing upgrade can make in pitcher performances and the role that could play in reaching a strategic critical mass.

Say Kevin Kiermaier, supreme ruler of the defensive center fielders, were beamed into a reality where he’s still the most talented fielder, but his least talented starting counterpart is the very good A.J. Pollock. Will the collective blood pressure of the general managers rise as often over center field defense? No. However, there will still be wildly divergent incentives to acquire Kiermaier.

The bizarro world club that built a worm-burning rotation around Dallas Keuchel, Ivan Nova, and Kendall Graveman might see that dwindling talent gap and happily take a bargain. The 85-ish-win team sending noted neck-craners Justin Verlander, Julio Teheran, and Drew Smyly out there? That team should pursue Kiermaier doggedly.

A similar logical process can be applied to framing when the granular strengths and weaknesses of a club are put in front of the 30,000-foot survey of the league. Maybe clubs are, in fact, resigned to the idea that they’ll never make framing into a vaunted inefficiency. But I don’t think that’s the case, not exactly.

We may not have much more to say about pitch framing within the vacuum of the pitch framing conversation. There is a lot to say about it outside of that vacuum, though. I propose we start by saying some things about Martin Maldonado.

Thus far in 2017, Maldonado has accumulated the second-most framing runs in the majors, behind the Dodgers’ perennial framer extraordinaire Yasmani Grandal. On a rate basis, Maldonado also ranks second in CSAA among catchers with 1,000-plus framing chances, or fourth if you lower the minimum to 750. It’s not the sample you want, but he’s performing at an elite level. 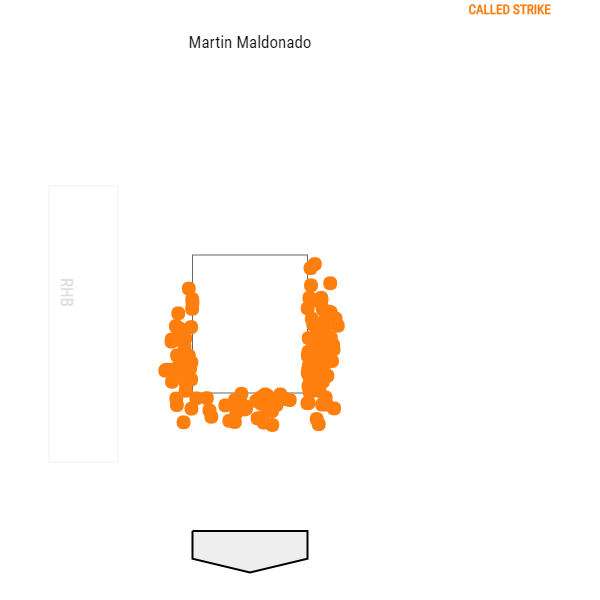 Maldonado plays for the Angels. As you may have heard, very few good pitchers play for the Angels. And their already sparsely overlapping Venn diagram of healthy pitchers and good pitchers has only been stretched further this season. Assuming Mike Trout doesn’t miss extended time with the hamstring problem that’s bothered him this week, the Angels can still aspire to a Wild Card berth, but those hopes increasingly appear dependent upon wringing the absolute maximum amount of production from a pitching staff that, uh, isn’t dripping with potential.

One noticeable way they are trying to get around those limitations, in the early going, is by testing how far outside the rulebook strike zone, and the prime hitting area, they can roam while still accumulating strikes. This can help veterans like Ricky Nolasco and prolific splitter-thrower Matt Shoemaker—who’s still searching for 2016’s breakout form—make up for their uninspiring fastballs.

More importantly, it can raise the baselines for out-of-the-blue decent pitcher J.C. Ramirez and journeyman Jesse Chavez. They are locating pitches away from hitters and outside the zone, and being rewarded for it. Ramirez, who converted from relief this offseason, has really tightened up his strategy—or perhaps just his execution. He’s going down and away all the time to righties, while hitting lefties both away and down and in, where his slider can do its work.

Chavez, who could help stabilize things a bit if he can swim as a member of the rotation, is posting a zone rate a full three percentage points below his previous career low. Whether that started as a concerted effort or evolved as he had success on the fringes doesn’t really matter, but you wonder how it works. Does someone tell Chavez that Maldonado can get him a strike even if he puts the ball further outside, and thus decreases the risk of an ever more common home run? Or does he just come to realize it when he makes pitches like this in huge situations and gets called strikes?

Regardless of the procedural matters, the Angels are using this to their advantage in a way that a lot of clubs don’t really need to. You only have to look to the Dodgers of recent vintage to understand the variance in how much or how little framing affects individual pitchers. Clayton Kershaw—who throws in the zone, induces swings, and makes hitters miss on those swings—simply doesn’t need to worry about getting a called strike two or three inches outside the zone on a 3-2 count as often as other pitchers.

Obviously, the Angels would love to have both a good-framing catcher and a staff full of pitchers who can produce without walking a called-strike tightrope. But they don’t have those pitchers. They have a bunch of hurlers inordinately better off staying further from the middle of the plate, and a catcher who can help enact that strategy more successfully than just about anyone, apparently.

This wasn’t an accident, either. You’ll recall the Angels went out of their way to trade Jett Bandy, a not-bad-but-not-great defensive catcher with more team control and more offensive upside, for Maldonado over the offseason. Call me crazy, but that sounds like they’re using pitch framing to their distinct advantage. And I bet it doesn’t end there.

You need to be logged in to comment. Login or Subscribe
lmarighi
Really enjoyed this. Contrarian, and also fun because we are talking about players who are perhaps marginal-to-okay on their own, but together are. . . well, good, but not elite. I feel like these are players who don't get as much attention, and so I want to hear more.
Reply to lmarighi