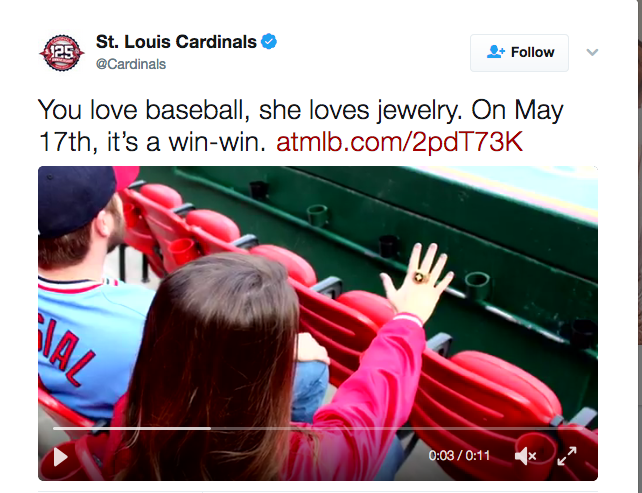 You’re an aspiring DJ. Her brain injury gives her a proclivity to cheap plastic things. On May 17th, it’s a win-win.

You think bobbles will be enough to win her love. She’s planning on leaving you tomorrow. On May 17th, it’s a win-win.

You love baseball. She is disappointed by your misrepresentation on Tinder. On May 17th, it’s a win-win.

You love baseball. She drives you to the game because of your DUIs. On May 17th, it’s a win-win.

You want to buy a hotdog. She knows you’re just going to go to Wendy’s after the game. On May 17th, it’s a win-win.

You love the Cardinals. She’s been writing a secret blog about how crappy a boyfriend you’ve been. On May 17th, it’s a win-win.

You love quoting that Musial home hits vs. road hits stat. She knows you’ve been screwing it up for years and puts up with you anyway. On May 17th, it’s a win-win.

You torched a Saab like a pile of leaves. She’s gone to find some better wheels. On May 17th, it’s a win-win.

Your work connection got you the tickets. Her credit card paid for the beers. On May 17th, it’s a win-win.

You are a reporter and adventurer who travels around the world. She is a dog named Snowy. On May 17th, it’s a Tintin.

You are a former 80’s MTV personality. She’s a frontier medicine woman. On May 17th, it’s a Quinn-Quinn.

A Crab Thinks About the 10-Day DL

When Major League Baseball suggested the 10-Day DL as a sort of halfway point or compromise between the onerous 15-Day DL and the listless slog of Day-To-Day injury status, most of us were convinced it was a good thing. Heck, I’m sure most of us still believe it’s a good thing. Without a midpoint, managers would just ride their stars into the ground instead of playing it safe with nagging injuries; now with a 10 day option, a manager can feasibly coast and let their players rest instead of play hurt. And who couldn’t love such a compromise?

Well, me for one! And it’s for two reasons, one serious and the other utterly frivolous. First, the serious reason:

The 10-Day DL is great on paper, but has been gamified by a series of managers and GMs looking for any feasible advantage in the brutal game we all love so well. And so we enter the irritating world of the phantom injury, wherein players who need a “mental break” or who simply are performing badly can be shunted off to the local Days Inn for a quick break. And while I am all for mental health and physical caution, I cannot quite convince myself that when Corey Kluber hits the 10-Day DL, he’s getting all the rehab and talk therapy he can handle.

I think, rather, that it’s pretty likely that this more humane version of the disabled list allows the managing bodies of baseball to maneuver the playing bodies in a way to maximize rosters and minimize risk. A player-forward move therefore is co-opted almost immediately by management as yet another tool in the forever-war of roster attrition. At least the players on the DL are pulling major league salaries, so this is more a gripe than a truly profound critique, but let’s agree that any method by which managers or coaches are more empowered to use the “mental break” — that canard that eludes all mental health diagnoses — is flawed-at-best.

But what, you’re asking, is the frivolous reason? Why, to paraphrase Homer Simpson, the 10-Day DL interferes with M.E. — My Enjoyment. Looking down a list of fantasy baseball players when setting my lineups in the morning and seeing 20 percent of the list on the 10-Day DL is pretty deflating. Getting excited about a young breakout star, just to see them hit the dreaded 10-Day DL with a tweak or a phantom injury is just the worst. Knowing my favorite ace or most feared hitter will probably find themselves taking a break on a disabled list because managers need a codified excuse to give their players a rest is out and out infuriating. It just…it harshes my buzz, man.

Ultimately, I have to admit, the 10-Day DL is a good thing for baseball to have. It’s important to provide as many avenues as possible for recovery and rest in the marathon of the MLB season. But I fear that this half-measure only empowers managers to further deny the need for regular mental and physical rest, and further stigmatizes the kind of player — hi Matt Harvey — who just needs a break, publicly, without being “injured.”

There’s no shame in the original disabled list: a day on the bench.