(On May 10th the Mariners and Phillies faced each other at Citizens Bank Park, in the final game of a short, two-game series. It was a 1:10 PM first pitch, local time.)

Glenda’s calves ached. Her doctor had insisted she start walking regularly, every morning. In her youth she had run some track; but work, marriage, kids, grandkids, and more work had slowly sapped the vitality from her limbs. Now, after a third straight morning spent huffing slowly through a few laps around the block, she felt spent.

Opening the front door she saw the many constant reminders of her increasing dotage. Dirty dishes in the sink, half-eaten cat food in the corner of the kitchen, beige countertops and wood-panelled walls. Glenda thumbed through the day’s mail: “Reverse Mortgages: Turn your home’s equity into income today!” A past due notice from the water company. Some coupons. She sighed, took stock of the mess around her, and grabbed some scissors before settling into her old, plaid recliner. She turned on the game, and began cutting out a 2 for 1 on dish soap. She stopped, and got up to close the blinds. It was a beautiful day outside, and there was glare on the tv.

Greg slipped into his chair, and immediately slumped over. It had been a long morning already. The projections simply weren’t aligning with reality, and he knew the early meeting would be rough. Typically he could deflect hard questions with a promise to “look further into it and report back” or some other nonsense phrase thrown to appease the here and now, but today had been different. The investors wanted answers, real answers, and Greg simply didn’t have any that would make them happy.

He flipped over to his portfolio, hoping for some good news, but the Chinese markets had closed down, and the US ones weren’t much better. He sighed, glanced over at the picture of the Kingdome on his desk, and opened up Gameday.

For Jessica it wasn’t the 7 to 15 miles she walked every day that made the fulfillment center so challenging. It wasn’t the stress of meeting quotas, the banal monotony, or the existential crisis of working in one of the clay-footed statues late capitalism had built for itself. It was simply the noise. The colossal, ever-present, ceaseless racket of packages, bins, conveyor belts, and voices all colliding in an unceasing, unholy, post-modern symphony. It gave her a headache.

Jessica heard a ping, and looked down. “Aisle 88, Section B, Row 3, Compartment F.” She sighed, snuck the earbud in her ear she hoped no one noticed, opened MLB At Bat on her phone, and turned on the game.

Like so many boys of a certain age, Frank became a Mariners fan because of Ken Griffey, Jr. Growing up an hour south of Philly, of course he liked the Phillies. But the Ricky Bottalico-led Phils of the mid-90’s didn’t do much for a kid’s imagination, and every time he was it his friend’s house with ESPN he’d see Griffey leaping over a wall, or hitting a home run. The team of course failed him at every turn, but fandom born of youth has a long half-life.

The Phillies won him over, eventually. You couldn’t live within 100 miles of Philly during the Utley-Howard-Lee-Werth days and not love that team. So Frank raised his son to root for both teams, and adorned in a Mariners shirsey and Phillies hat, father and son took a day off to watch the game.

With the game ready to start Frank found himself staring at Chooch Ruiz. A key, beloved part of the Phillies’ glory days, now with a face lined by time and sun, Ruiz was standing behind home plate, gazing out at the field. Frank could hear Harry Kalas’s voice afresh:

“Swing and a miss! Struck him out! The Phillies are 2008 World Champions!”

Ruiz’s eyes’ wandered over to third base, and found Frank’s eye. The old catcher sighed, and crouched in the habitual fashion of his position, in defiance of his age.

The Disempowerment of Positive Thinking

Last week, Ryan Howard told reporters that his struggles in Triple-A at age 37 were not enough to make him consider retirement: “There’s more in the tank. If you walk away, don’t walk away with something still left in the tank.” 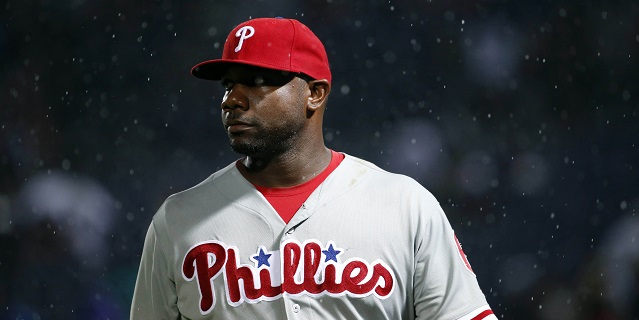 There was something uncomfortable about that then, with Howard hitting .188 and yet still only able to speak of walking away from the game as an if rather than a when. And there’s something especially uncomfortable about that now, with the news that Howard has been cut from his minor-league contract only days after he promised that he couldn’t possibly be done just yet.

Discomfort isn’t the only lens through which to view this, of course. You can also marvel at Howard’s conviction in his own ability, even with so much evidence to the contrary; you can weave something from the threads of dedication and passion and pride in one’s work. (People more optimistic or secure or generous than I am—they probably do.) But while discomfort isn’t a particularly positive lens here, it’s a very accessible one. To read Howard’s comments in context is to catch the sad unspooling of so many common fears: it’s making a promise you know you cannot keep, or, worse, making a promise you think you can keep while everyone around you knows you cannot.

Positive thinking is so often blithely marketed to us as a cheery, harmless one-size-fits-all cure to improve any predicament—and here it’s applied in a situation where it’s none of those things, where positivity has been pursued so relentlessly that the sad objective reality has been flattened and lost. This is the dangerous gray space between “positive thinking” and “lying,” both to yourself and to everyone around you. It’s the kitten clinging to a rope on a maddeningly peppy human resources poster, instructing you to hang on! while refusing to believe that it’s dragging down the whole enterprise because it won’t accept that it’s okay to let go.

It isn’t just public failure; baseball is so full of public failure. It’s public failure framed in the gap between how Howard describes himself and how everyone else does—which is, perhaps even more so than post-playing life for someone who clearly just wants to play, a deeply uncomfortable space.

Everyone watched Jeremy Guthrie die. Either at the time or on the highlight reels, like an overproduced snuff film, America went through the same steps:

Twelve batters. Two outs, ten earned runs. By the end everyone, even Guthrie himself, knew it was the end. And not a real end, pathetic and logical, like Ryan Howard’s denouement. It was as if the author himself died, mid-sentence, and the story was published with the last five pages ripped out. So many players are forced to retire, but it’s awful when the act is performed by the opposing team.

We all watched Jeremy Guthrie, the baseball player, die that day, but none of us attended the funeral. He cleared waivers and was instantly forgotten, no longer of use to our communal hallucination of Official Baseball. For a month he dwelt between hero and man, before providing an interview with Mark Zuckerman on Monday. In it he was everything you would want a ballplayer to be: honest, thoughtful, intelligent. Everything, that is, except the only thing anyone wants from their ballplayers: talented.

I’ve never really understood this. I’ve never understood why we worship the men who are more talented than the other men, or else overcompensate and ally with the least talented men, the ones who are surely working harder. But with a few notable exceptions, everyone is trying. Everyone is doing their best. Almost everyone is a good person, in this extremely limited boundary in which we allow these athletes to express their life’s work.

Then something like this happens to Jeremy Guthrie, fashions his name into a punchline, the moment he worked so hard for nothing more than a Wilhelm scream. And you see a number, that 135.00 (extended unnecessarily to the hundredths place, just to underscore the ugliness), and it seems so arbitrary. In any other aspect of life, hanging a number on fifteen minutes of a life would be unpleasant, even dehumanizing. I have had days where I forgot to lock the door, where I left the freezer open, forgot to feed the crying baby for an hour because I’m too busy wondering why it’s crying. I, and you, have certainly had worse days than Jeremy Guthrie’s final day, and yet we’re not doomed to wear it like a scarlet letter. Only in high school education or the checkstand of a Target would we treat someone with so little humanity.

It’s a shame that so few people noticed the true ending to Guthrie’s career, because the humility and honesty with which he approached it says far more than twelve batters could. You often can’t choose when you retire, but you can choose how.

You need to be logged in to comment. Login or Subscribe
BrewersTT
Well done on Guthrie. Every day a player somewhere hangs them up. But for no particular reason, Guthrie gets to have a 135.00 ERA on his last MLB stat line, and gets to remember that walk to the showers after the horrors, for ever and ever. Open wound, pour in salt.
Reply to BrewersTT
JPinPhilly
Kalas. Harry Kalas. Not "Callis".