There was *extremely Western storytellin’ voice* an old adage on the Effectively Wild podcast about how we knew when WARP had stabilized during the season by when Mike Trout appeared at the top of the list. Well, with Trout having played just one game since May 3, and even in danger of hitting the disabled list, we’re likely still a few weeks away from that[1]. In the meantime, maybe we can skate by with pushing the fate of normalization onto those at the other end of the spectrum to see if the opposite applies.

Of course, it’s easier to mentally jog to the players who have finished at the top of the WARP leaderboard this century. They are universally elite names: Jose Bautista, Carlos Beltran, Barry Bonds, Kris Bryant, Bryce Harper, Buster Posey, Albert Pujols, Alex Rodriguez, and (of course) Mike Trout.

Now, how many of you can guess even two or three of the 16 players who have finished at the bottom of the individual WARP standings since 2001 (among players with 500 or more plate appearances)? I’ll even embed some videos in this space so that you …

Here are 15 of those 16 players (with one temporarily omitted, but we’ll get to him later), along with my favorite line(s) about them from the BP Annual published the year after they so ceremoniously crapped the bed, plus what they were worth in WARP over the rest of their career:

2016: Alexei Ramirez, -0.83 WARP
Quote: “Last year’s Annual warned that Ramirez’s BABIP dip might have heralded the beginning of the end for the steady Cuban shortstop. In hindsight, Nostradamus has nothing on those portentous words.”
What came next: Well, nothing so far.

2014: Allen Craig, -2.15 WARP
Quote: “Sandwich Craig's worsening batted ball trends between his Maginot Line outfielding and his litany of injuries, and it's tough to be terribly optimistic that he'll be anything but optimistically terrible.”
What came next: Another -0.6 WARP in just 88 plate appearances and a lifetime of purposeful mishaps when he orders coffee at Dunkin’ Donuts.

2012: Justin Smoak, -2.02 WARP
Quote: “In this space last year, we used not-quite-arbitrary endpoints to suggest that Smoak’s problems were related to thumb injuries, and that he might actually be pretty good. Whoops!”
What came next: Another 1,575 plate appearances[3] of -0.5 WARP performance.

2011: Miguel Olivo, -1.47 WARP
Quote: “The Great Man theory would posit Miguel Olivo accomplished something historical in 2011: he led his team in runs batted in, despite posting one of the dozen worst OBPs in post-Deadball Era history. Only a truly elite hacker could be both his team's most and least productive hitter, and Olivo is that hacker.”
What came next: Another -0.4 WARP over parts of three seasons, but the final straw came when he attempted to eat Alex Guerrero at Triple-A[4].

2010: Cesar Izturis, -1.63 WARP
Quote: “It is tempting to write that Izturis gave the Orioles a season out of the Mark Belanger catalog, but that would be inaccurate—Belanger was actually a better hitter.”
What came next: Another -0.8 WARP in just 315 more plate appearances across three more organizations.

2009: Aubrey Huff, -1.64 WARP
Quote: “Huff was horrid in 2009, finishing dead last in the majors with a -14 VORP. For the Orioles, empty offense didn't matter; for the Tigers, trading for this "bat" in the middle of a pennant race was a disaster.”
What came next: He almost ruined the premise here by having a huge rebound year with the Giants in 2010, and tallied 7.4 WARP before retiring in 2012. If only he had retired from Twitter then, too.

2008: Yuniesky Betancourt, -1.03 WARP
Quote: “He'll swing at everything, hit most of what he swings at, draw a walk only when John Cleese sits behind the plate and says, ‘And now for something completely different,’ and hit enough doubles to keep pitchers honest.”
What came next: An incredible 2,317 more plate appearances adding up to -0.9 WARP.

2007: Nick Punto, -1.02 WARP
Quote: “To Ron Gardenhire's credit, he did try to minimize Punto's role last year once he realized the 2006 version wasn't walking through that door.”
What came next: Just over five wins across the next seven seasons, but he did have a trade named after him.

2006: Angel Berroa, -2.11 WARP
Quote: “The simplest way for the Royals to find another three wins is to replace Berroa with another—any other—shortstop.”
What came next: Another 324 plate appearances in which he was worth 0.1 WARP.

2005: Scott Hatteberg, -0.82 WARP
Quote: “He may have done more damage to his team`s pennant hopes than any player in baseball last year.”
What came next: He did have 2.5 WARP left in him, but nothing beats having Chris Pratt play you in a movie.

2003: Ramon Santiago, -1.23 WARP
Quote: “Two decades ago, the story was that Alan Trammell and Lou Whitaker were so intimately connected that karmic forces prevented either of them from outplaying the other for very long. The same forces appear to have returned to play a joke on the Tigers.”
What came next: Over 2,000 more plate appearances and 3.8 WARP for the owner of a career .234 TAv.

2002: Vinny Castilla, -2.12 WARP
Quote: “Maybe Schuerholz figured, ‘I signed a slick-fielding third baseman (Pendleton) and he became an MVP, and I signed an ex-Rockies power hitter (Galarraga) and he hit 44 home runs, so if I sign a slick-fielding third baseman who’s also an ex-Rockies power hitter…(evil cackling).’
What came next: He returned to Colorado and was an average hitter in 2004, garnering him a league-leading RBI total and an MVP vote. He played his way out of baseball back at sea level.

2001: Luis Rivas, -1.60 WARP
Quote: “It remains to be seen whether Rivas should be lumped with Alex Gonzalez and Brent Gates, or perhaps in a group above that.”
What came next: His youth did not portend future growth and he was worth one win below average over the last 1,480 plate appearances of his career.

Yes, we’ve conveniently skipped over the 2015 edition because he has the potential to break the mold here. He wasn’t a 30-something has-been hanging onto the end of his career for dear life like your racist uncle and his Obama wiretapping conspiracy theories. He wasn’t a too-young-to-be-counted-on prospect grinding out playing time for a team that was going nowhere. Instead, he was a good prospect gone bad[5]. A bust. A player who caused fans to clamor for him to be replaced by Nick Ahmed, who you may know from such TAvs as .200, .236, .197, and .207.

2015: Chris Owings, -1.85 WARP
Quote: “To find somebody with Owings' mass of suck and lack of slug, go all the way back to Bill Cunningham in 1911. Owings had curiously low splits against lefties, so if it's all BABIP luck, then perhaps he'll bounce back better than Cunningham, who would go on to play eight more games in his career and eventually die.”

Dark, but not unfair. What we’re starting to see, however, is that the historically bad season Owings had in 2015 was a perilous combination of factors. First of all, there was a shoulder injury at play. Owings played through the lingering effects of a left shoulder strain that sidelined him for nearly half of the previous season. And he did so at a position he had only played 41 games at professionally (including the minors). Finally, the lack of infield organizational depth for the Diamondbacks led him to play most of the season anyway when he likely would have been replaced, or at least seen his playing time diminish more, on most other teams.

But a funny thing happened on the way to being a bust. He got healthier and he got better. He was a better shortstop and center fielder than he was second baseman, and his defensive numbers started hurtling back up towards respectability[6]. He also starting swinging a little less and driving the ball a little more. His extremely strange platoon split from 2015 (.495 OPS versus southpaws) reversed itself and he hit .306/.345/.481 in 116 trips to the plate against them in 2016. He’s raised that to .351/.385/.568 in a much smaller, but not insignificant 39 plate appearance sample this year.

It’s been anything but straight-line development for the 25-year-old, and while we’ve certainly learned more about Owings as a major leaguer, it still barely seems that we know more than we did as a prospect. Here’s the full write-up from Jason Parks when he wrote the Diamondbacks’ Top 10 Prospect List back in January of 2013, after Owings had just finished a breakout campaign in the Cal League: 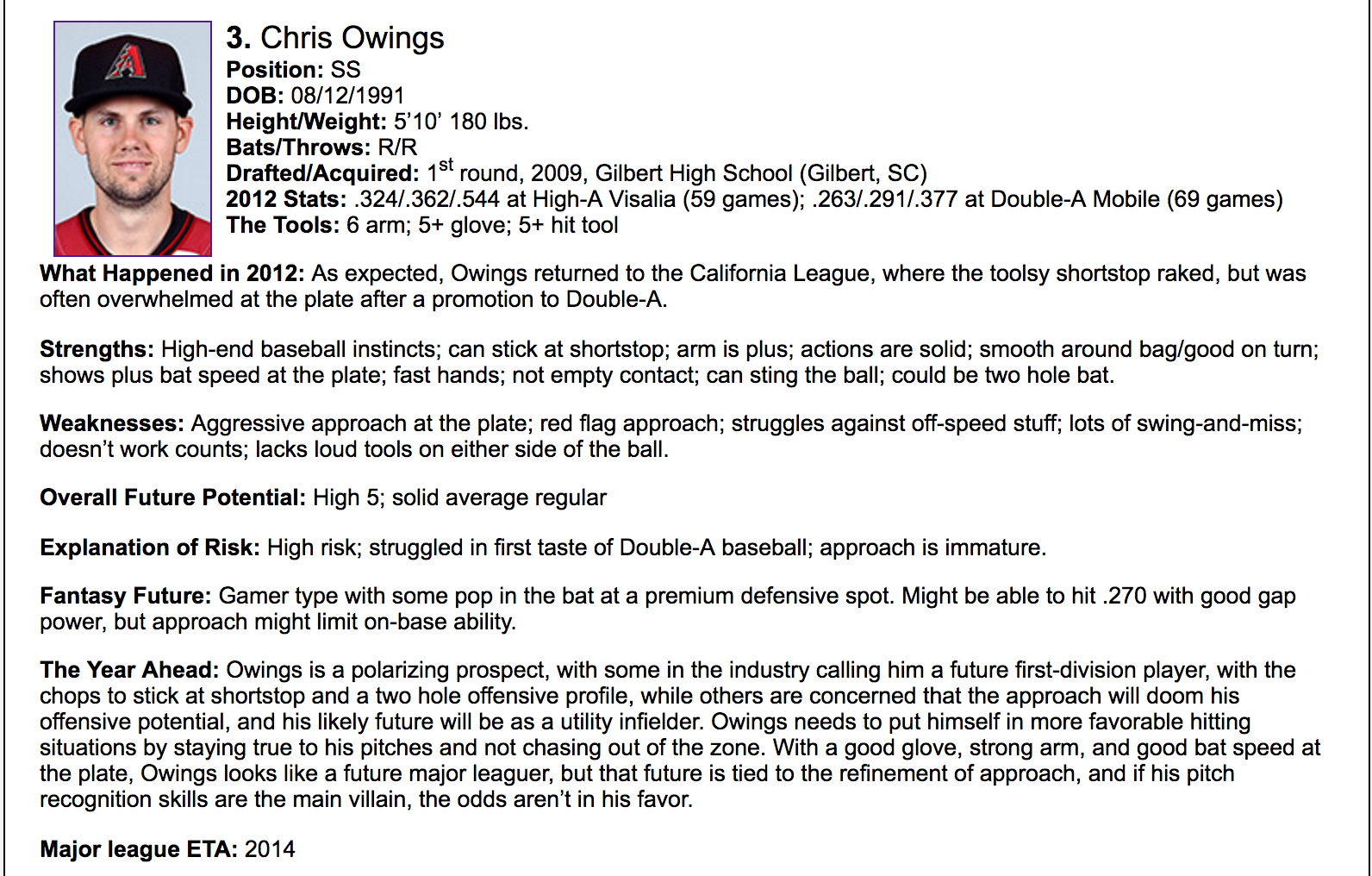 This seems like a report that could conceivably have been written this past offseason, as both the strengths and weakness, along with the questions, still apply. However, another 6-8 weeks of this level of performance from Owings, and he stands a fair chance to be the only player this century to be the worst player in baseball and then reestablish himself enough to make an All-Star team. And while it’s far from a perfect measure, the issue we generally have with All-Star selections is that we have too many and not the other way around.

So how do we view the sample sizes based on the players who make up the depths of baseball right now? Here are the five worst players in baseball as of the games of May 9:

5. Danny Espinosa, -0.75 WARP
The struggling Angel really fits the bill of a middle infielder who FRAA turns on once he turns 30, while he has a down season with the bat. He has the added benefit of the Angels not really having anyone else to plug in even if he continues to be this bad. Strong candidate.

4. Cody Asche, -0.77 WARP
While the former Phillies third baseman of the future has been truly awful so far, there’s just about no chance he accumulates the at-bats necessary to reach greatness in reverse. Poor candidate.

3. Curtis Granderson, -0.89 WARP
As someone who watches the Mets more than any other team, seeing Granderson look like this just makes me overly sad, but the only troubling thing about his approach is that he’s not being as selective and chasing more. Still, he should bounce back and avoid this fate. Decent candidate.

2. Mike Napoli, -1.06 WARP
The forever shirtless one hasn’t had a single-digit walk rate since 2010 and is walking 4.5 percent of the time in this short season. His swing rate outside the zone is jumping and his contact rate is falling. Not a great combination. Decent candidate.

1. Devon Travis, -1.09 WARP
Here is the best corollary to Owings—a young infielder coming off a solid initial showing in the majors only to have a confluence of circumstances corner him into an awful season. Yet, as we saw, it’s very rare, which makes this unlikely. Poor candidate.

[4] Yes, the spreads aren’t great but this hardly seems like an excuse.

[6] In fact, if you want to deal in one-month FRAA samples (god bless your soul), he’s been above-average so far this year.