It’s hard not to get a little emotional when a player makes his major-league debut, but last night had a particularly special moment: 27-year-old Gift Ngoepe, the first South African and African to play in MLB, finally completed his 8.5-year marathon through the Pirates’ minor-league system by making his debut. He also notched his first career hit, slapping a single up the middle in the fourth inning.

Ngoepe’s story is nothing short of incredible, and I encourage you to set aside time to read Gary Smith’s profile on the shortstop from 2009. Raised by a single mother, Ngoepe grew up in, of all places, a 7.5-by-9-foot room which served as a clubhouse for one of South Africa’s few recreational baseball teams. His childhood home was the reason he chose baseball over more popular South African sports in middle school, and just a few years later he was performing in front of scouts in the World Baseball Classic

While Gift’s story deserves a dozen articles alone, the sheer improbability of his appearance on an MLB field is just as remarkable. Ngoepe is the 18,950th player in MLB history, a shockingly low total; to put this number into perspective, it would account for less than half of the current student body at the University of Michigan. But by freak chance, Ngoepe is a major leaguer.

It would be rare enough to be one of the few people on this earth given the athletic ability to play professional baseball. Still, that wouldn’t have meant anything if Ngoepe didn’t somehow end up calling a baseball clubhouse his home, in a country where fewer than 0.5 percent of the population has ever played the sport. Not only did Gift end up playing a practically unheard of game in Africa, he stuck with it and played well enough to be noticed by Pirates scouts. Well enough to be flown off the continent he came from—one that had exactly zero MLB players, despite a population of over 1.2 billion people—and coached into a professional baseball player.

It may be a while until we see another African baseball player, but baseball’s globalization took a massive step forward on Wednesday when it found a quick-handed shortstop by the name of Gift Ngoepe. On a more personal level, one man’s dream came true, his decision to leave home at 19 years old validated, and his nearly nine-year uphill battle—defying odds, expectations, and practically everything else along the way—was finally won.

Professional sports’ greatest rivalry very likely belongs to the Yankees and Red Sox, who combine recent and (in)famous bouts with rich and colorful histories to create must-watch games. Although the contention has somewhat cooled off in recent years, it’s still hard to find a Yankees/Red Sox game that disappoints.

While Wednesday’s contest between the two AL East stalwarts didn’t contain any earth-shattering events, the Yankees’ 3-1 win was a well-fought and entertaining game. Headlined by a great showing from birthday boy Aaron Judge and former-future-possibly-current Yankees ace Luis Severino, the Baby Bombers stuck through a rain-soaked outing to pull off the win.

Scoring began in the second inning, when Judge did what he was born to do—hit very big home runs:

Driving an opposite-field, 385-foot blast in Fenway Park would have been more than enough to celebrate Judge’s 25th birthday, but he wasn’t finished. An inning after his home run, the 280-pound right fielder did his best Derek Jeter impression by flying into the stands to corral a foul ball.

For the remainder of the game, it was Severino who stole the show by throwing seven shutout innings, striking out six and allowing just five baserunners on three hits and two walks. Now with 33 strikeouts versus just four walks over 27 innings this season, Severino is looking like a completely different pitcher after last year’s disastrous 8.50 ERA as a starter. Despite narrowly squeezing into a rotation spot this spring, Severino has been perhaps the Yankees’ best pitcher thus far, showcasing improved fastball command, a dominant slider, and a solid changeup to complete the arsenal.

Given this was a Yankees/Red Sox game, it had to come down to the wire, so naturally Aroldis Chapman brought the winning run to the plate in the ninth after a late-inning rally closed the score to 3-1. While Chapman escaped the jam with a pair of strikeouts, he didn’t look himself and, for perhaps the first time ever, he wasn’t the hardest-throwing pitcher in the game. This time around, that title belonged to Joe Kelly, he of The Good Stuff, who crossed the century mark with his fastball several times, hitting as high as 101 mph on the radar gun.

Century-old rivalries which extend from the early 1900s to present day are awfully fun, but if you want to tune out all the drama and instead focus on the purest form of the game, this next matchup may be for you. “The purest form of the game” takes on a completely different meaning depending on who you ask, but some may flash back to their childhood and Little League days, when baseball was just a carefree game.

It’s not going to be easy to find a major-league game that reminds us all of Little League, but the Rays and Orioles certainly did their best in imitating one. Let’s start with a play that literally has “Little League” in the name … a Little League home run:

Every team always had that one kid who had already become a superstar—a titan among children—and wreaked havoc against unprepared competition. In this game, that role was taken on by Tim Beckham, who had quite the day with a pair of home runs and a double.

Despite those phenoms, Little League was still filled with elementary school students who were figuring out the whole coordination thing. So, bouts of wildness on the mound were simply inevitable. Luckily for Baltimore this stereotype was filled by the Rays’ hurlers, who struggled to find the strike zone in the bottom of the eleventh inning, leading to disaster.

Alex Colome, armed with a one-run lead (courtesy of two hit by pitches, of course) and an opportunity to seal an extra-innings win, gave up two singles before walking a pair—tying the game back up and loading the bases. Colome, clearly gassed and left in a bit too long, was lifted in favor of Danny Farquhar, who threw ball one, ball two, ball three, and …

Wednesday’s second walk-off win was a far, uh, cleaner game of baseball, played by the Dodgers and the Giants. This game was all Dodgers from the start, as Alex Wood came out of the gates firing strikes and continued to make Giants hitters miss for five no-hit innings. While he lost the no-hit bid in the sixth, Wood departed with just a single and walk to his name over six frames.

On the offensive side of the ball, Corey Seager destroyed a Johnny Cueto four-seamer for a solo home run in the top of the sixth.

Seager’s doing his best to show that last year’s 26-homer rookie campaign was no fluke, and he proved his elite raw power on this home run: the dinger traveled 462 feet, tying Joey Gallo for this year’s longest home run.

The Dodgers scored another two runs following Seager’s fifth-inning moonshot to make the score 3-0, though that lead quickly evaporated in the bottom of the seventh when Christian Arroyo (#BossBaby) hit his first home run.

In the eighth inning, Michael Morse made his triumphant return to San Fransisco by tying the game up with a home run of his own.

Two innings later, in the bottom of the 10th inning, Hunter Pence stepped to the plate with the bases loaded, intent on fulfilling the Morse-Pence prophecy which was immortalized in this absolutely breathtaking shot from several seasons ago. 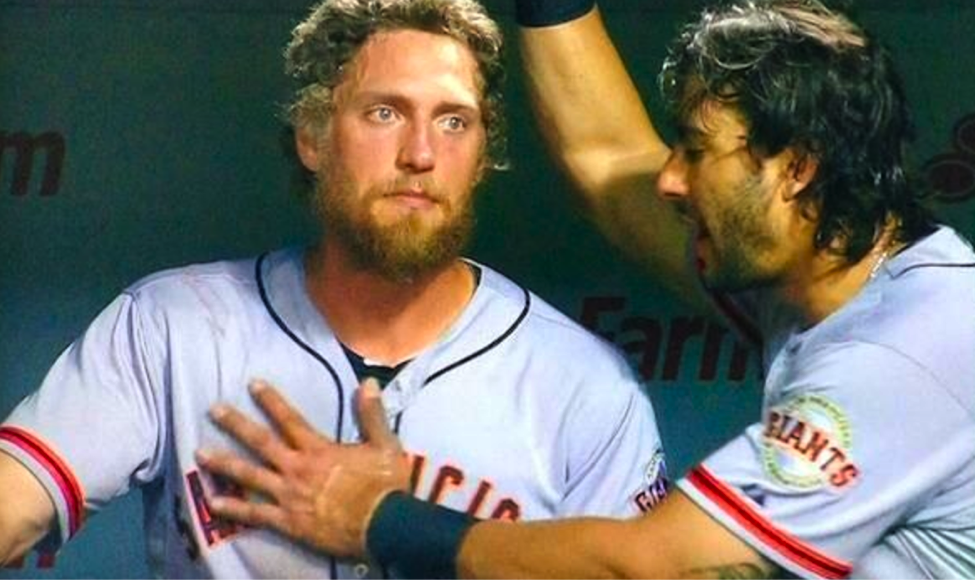 Pence did his best Vladimir Guerrero impression, flailing at more than a few pitches far above the strike zone before finally being given a pitch reasonably close to the strike zone. Pence jumped at the opportunity and drove the ball just far enough out to left field to score Gorkys Hernandez and win the game on a walk-off sacrifice fly. In non-baseball terms, Pence completed the prophecy.

While I mentioned this earlier, Aaron Judge flying falling flipping into the stands to make an excellent catch was equal parts terrifying and entertaining:

What to Watch for Thursday

Early on Thursday, all eyes will be on Noah Syndergaard as he looks to shut down the Braves’ lineup and end the Mets’ five-game losing streak at 1:10pm ET. At the same time, the Tigers will meet the Mariners in Detroit, and it’ll be worth watching whether Hisashi Iwakuma and Justin Verlander can bounce back from their slow starts to the season.

On the opposite side of the spectrum, overachievers Gio Gonzalez and Antonio Senzatela will face off in Coors at 3:10 pm ET. What could possibly go wrong?

More must-watch TV will come when Julio Urias makes his 2017 debut for the Dodgers at 3:45 pm ET, and make sure to catch rookies TBD and TBD (per MLB.com) face off in the Astros/Indians contest later in the evening. Masahiro Tanaka and Chris Sale headline the best pitching matchup of the evening, with the Yankees playing the Red Sox at 7:10 pm ET.

You need to be logged in to comment. Login or Subscribe
Deadheadbrewer
Re: the back story to Gift Ngoepe--a sincere "thank you" for the tears in my coffee.
Reply to Deadheadbrewer
newsense
Can't wait for Ngoepe to appear on The Daily Show
Reply to newsense
EvGeer
"It may be a while until we see another African baseball player,..."

Maybe not. Gift has a younger brother, Victor, who is on the Pirates GCL roster.

http://www.milb.com/player/index.jsp?sid=milb&player_id=667230#/career/R/hitting/2016/ALL
Reply to EvGeer
jsdspud
As a Pirates fan, I can remember when they signed Ngoepe. It has been interesting to follow his progress over the years. The odds that he overcame are truly unbelievable. I hope that he hits enough so that he sticks in MLB.

On a side note, after seeing the slow motion reply of the Judge play I need to remember to always wear long shirts to games. I don't want my "crack" being visible to viewers.
Reply to jsdspud
oldbopper
I have watched Red Sox baseball forever, well at least since 1948, and there have been very, very few balls hit into the bullpen in RF by a right-handed hitter on as nasty, dreary, cold, wet April night as last night. Judge and Severino scare the living daylights out of we Red Sox fans.
Reply to oldbopper