The tale of Eric Thames is growing taller by the day. Complete with inane steroid accusations, ballin’ body armor, and mesmerizing one-handed warm-up cuts, the reappearance and ascendance of this exceedingly fit man owes much of its mystique to the time he spent offscreen.

We are told that in this great unknown time, Thames—who, when we last we saw him, was a Quad-A player—did to the Korean Baseball Organization over three years what he’s done to the Cincinnati Reds' pitching staff for the past three weeks. We are told that he so demolished the conventional notions of baseball dominance, especially in his 47-homer, 40-steal 2015 season, that his nickname among KBO fans was simply, “God.”

Now we can see, with our own eyes, in the comfort of our own league and its familiar trappings, that he is, in fact, different from the Thames we once confused with the other guy named Thames. Many observers not tricked by the tomfoolery of John Lackey (whose cutter is apparently unhittable to all but the chemically enhanced) already spotted the most significant difference in Thames: Vastly improved plate discipline.

At the risk of having buried the lede, I’m here to tell you that thanks to Brian Cartwright, the heretofore unseen middle portion of Thames’ story need not be so mystifying. Cartwright has generously provided pitch-by-pitch data for the past three seasons of KBO play, including detailed plate discipline statistics for most pitches thrown in 2015 and 2016. With those numbers, we can explore how Thames came to post Barry Bonds-like numbers in an established professional baseball league.

And we can begin to focus our wandering eyes on a curious narrative that is just beginning to play out: Once you have hit like Barry Bonds, does it change you? Is there wisdom to be found on the mountaintop?

Everyone has seen a table of Thames’ major-league plate discipline numbers, complete with the five-year chasm during which everything apparently changed. Let’s fill that in, as much as we can. (Again, major thanks to Brian Cartwright and his data acquisition wizardry.)

Thames was probably pitched out of the zone instinctively in some ways. Partly because of his intimidating appearance and partly because his American numbers showed a free-swinger. While the idea that he saw an absurd number of off-speed pitches in Korea is not really true—according to Cartwright’s data, 48.0 and 48.1 percent of the pitches he saw in 2015 and 2016, respectively, were four-seam fastballs—he quickly justified the careful treatment.

Bursting onto the scene this month, he’s drawn attention partially because oh-my-god-look-he-just-hit-another-homer. But he’s also looking the part—displaying an elite approach at the plate that raises the question of how exactly the time in Korea transformed his game.

I have an entirely unprovable theory about baseball that Thames just so happens to advance. It goes something like this: Everyone could benefit from feeling like the rest of the players on the field are struggling to deal with their excellence.

This is a feeling I presume every major leaguer has experienced at some point. It may be the only way Kris Bryant or Corey Seager know the game of baseball, but for most it stops at some point in the minors or maybe in college. By the time your typical player gets to the big leagues, it’s very unlikely he looks around the diamond surveying the inferior beings attempting to chip away at his ongoing greatness.

While I’ve already said this is unprovable, I’ll reiterate that both the effects of said feeling and its half-life would be altogether intangible and unmeasurable. It also fails to account for the fine line between believing you can hit anything, say, and believing that the pitcher will eventually have to throw you something you like, and that you won’t miss it.

Take Bryce Harper. Whether it was the Sports Illustrated cover, or the bravado, or the hair, he saw only 41 percent of his pitches in the zone when he debuted in 2012. Outside of an injury-shortened 2014, it’s never gone higher than last season’s 44.5 percent—which was the 11th-lowest mark among hitters who saw at least 2,000 pitches. When he posted one of the greatest offensive seasons of our generation in 2015, you wonder whether he viewed it as an achievement or simply the full reveal of his ever-present ability. While this mindset clearly isn’t what makes players good, and is in no way a requirement for success, it seems like it could be helpful when experienced over a full season or two.

In our early 2017 sample, there is some common ground between the only two hitters in baseball who might still feel like they’re Barry Bonds. Thames and Harper are putting up obscene numbers in deep counts. Entering Wednesday’s action, Thames’ OPS in two-strike counts was 1.237 and Harper’s was 1.144. That is a) not going to continue, and b) probably a function of something else. They have each taken more than a third of their plate appearances to three-ball counts.

Whether it’s a strategy that their performances have confirmed in their minds or an unusual level of confidence, Thames and Harper are displaying selectivity beyond what we typically mean when he talk about disciplined hitters. Thames is hailed for no longer chasing balls. Which is true, his chase rate is vastly improved. What’s more interesting is how his decisions to swing are pushing back against the prevailing strategies of opposing pitchers. 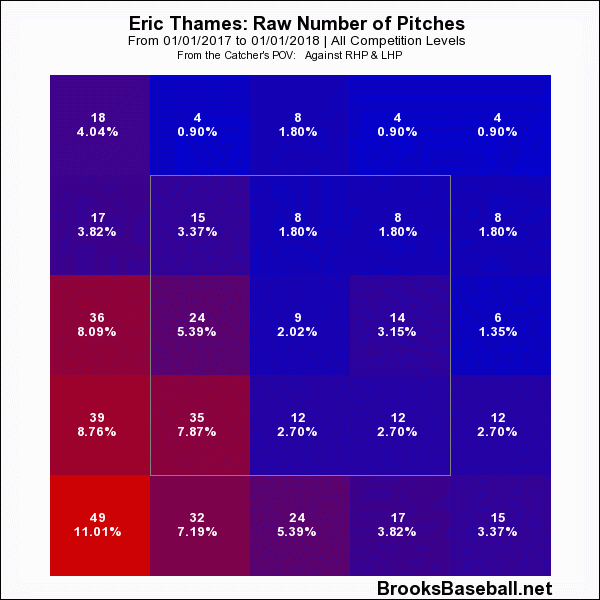 He refuses to swing at the low-and away pitch that he’s being force-fed. If you stray anywhere in the middle level of the zone, though, he pounces nearly every time. 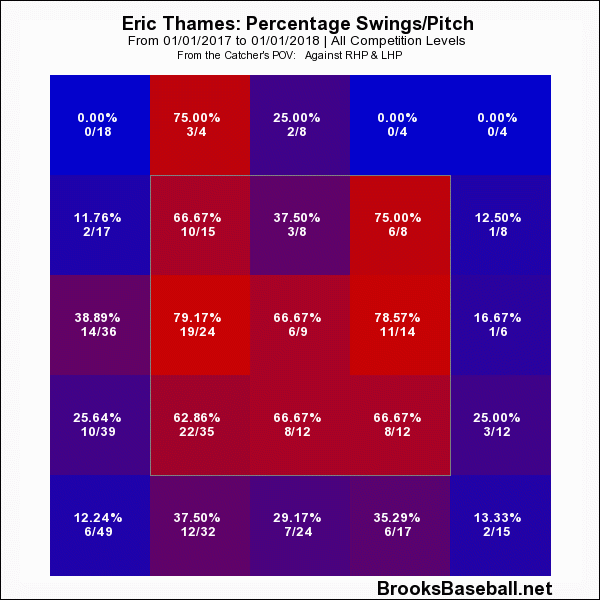 He’s not just exhibiting discipline, but a command of his own strengths and weaknesses that is difficult to gain without an intensive exploration of them.

When the traditional hero’s journey is broken down and analyzed for high school English students or creative writing classes, it includes a couple of milestones. The first comes when the protagonist drops out of sight to transform into someone different—better, stronger. The textbooks that explain this pattern sometimes refer to it as “crossing the threshold to the special world.” What follows is inevitably described as a period of trials or tests—the montage scene of any superhero or sports movie.

Eventually, that gives way to a more focused mission to solve one final flaw, to correct or mask that last weakness the villain of the story will inevitably figure out and exploit in about an hour or 200 pages or whatever. One textbook calls this stage the “Approach to the Innermost Cave.” Another author (highly esteemed, no doubt) calls it “The Vision Quest.”

Thames’ trials and tests in Korea were a rollicking good time, backed by a soundtrack that could convince you to work out for the first time in five years. No one on earth who took more than 300 plate appearances in organized professional baseball had a better 2015. The effects were numerous. For one, he will be taking selfies with Korean fans for the rest of his days. But more importantly, he was forced to fully confront his weaknesses before he reached that last milestone of the hero stories—the return.

A more simplistic analysis of the human narrative convention goes like this: There are only two plots. A person goes on a journey, or a stranger comes to town. The distinctive thing about Barry Bonds and his homer-hitting, walk-taking, fear-inducing peak is that we often focus not on his journey to baseball nirvana, but on the unprecedented reaction of those around him. Failing to grasp Bonds’ utter dominance, we turn to the inverted version of the story for understanding.

Thames hasn’t reduced us to that yet, but it’s a lens we can use to examine what changed in Korea.

Cartwright (our data benefactor) also provided plate discipline numbers broken out by pitch classification. Within that data, we can see how the Korean pitchers adapted between 2015 and 2016. None of this is simple, of course, but you can spot a few changes that must have been undertaken by a significant number of opponents. Thames saw a bump in changeups and forkballs, especially from righties, thanks to elevated (for him) whiff and swing rates.

Left-handed hurlers tried throwing Thames more fastballs in the zone, perhaps hoping for called strikes since he only swung at 42 percent of their strikes in 2015. He started swinging at 47 percent of them. Right-handed hurlers, meanwhile, abandoned the zone, dropping from a 43 percent fastball zone rate in 2015 to a 31 percent rate in 2016. This doesn’t appear to have done anything on its own, but may have affected how he viewed other pitches, which is the interesting part.

As you may recall from the earlier charts, pitchers gave Thames a very low 38.3 percent of his offerings in the zone in 2015. In 2016, that dropped to 34.9 percent. But the proportion of right-handed curves and left-handed sliders in the zone skyrocketed. Presumably, these were the pitches that the Korean pitchers felt challenged Thames the most, or the pitches at which he least wanted to swing. Let’s look at the lefty-on-lefty sliders, which is the larger sample.

Thames didn’t really improve against them in terms of how often he made contact, and we don’t know if he improved in the quality of the contact. What we do know is that he did not give pitchers what they wanted—easy, called strikes. If they hoped he was going to stare at strike three, well, he didn’t. I put the foul-ball percentage on there not because I know what to make of it, but because it suggests that perhaps he put more effort into fighting through these unwanted pitches, frustrating his opponents and eventually forcing them to acquiesce and give him something better to hit.

Judging by his numbers, the Korean pitchers succeeded in exerting some gravitational pull on his production, but would it have lasted? We’ve seen Thames, in his early action this season, smash mistakes. We’ve seen him lay off the pitches his opponents want him to go after. We’ve seen him work into deep counts—favorable or not—and get the pitch he wanted. In the Korean numbers, we can see at least the shadows of what he gained in his travels—an aptitude for countering his opponents, and an understanding that he might be bigger than the obstacles thrown into his way.

Now we will get a prolonged look at a player who has seen himself as an unstoppable force, as Thames tests just how much of that special world he can carry along in his return.

You need to be logged in to comment. Login or Subscribe
MikePemulis
Favorable comps at this point in their careers:
Muad'Dib
William Wallace
Gilgamesh
Sid Finch
Logan Weapon X
Ulysses Grant
Reply to MikePemulis