The Fallacy of Baseball as Peacemaker 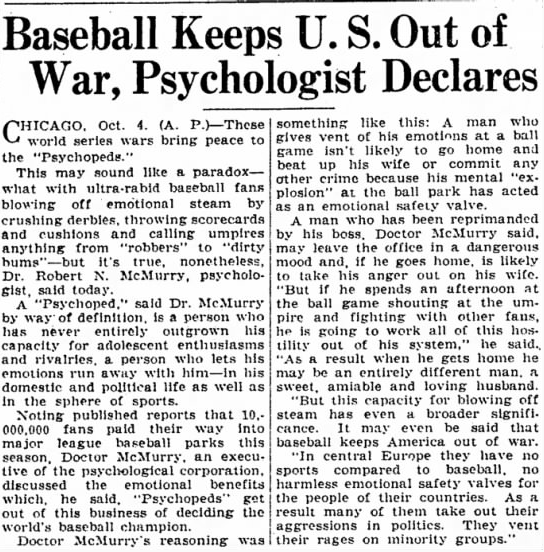 Thirty years later, the story of its final game was hidden in the crevices of the ballpark, obscured by the thick layers of dust and cobwebs coating it. The metal bleachers that once housed proud parents were covered in rust and could barely hold the weight of one small child, let alone the weight of 18 different hopes and dreams. No bases marked the infield, and if one did not carefully comb the dry, weed-covered dirt to find the slight divots remaining from the holes in which the bases sat, one would not know these bases existed at all.

Inside one dugout, nestled underneath the jagged slats of a broken bench lay a solitary black baseball glove that had been dropped in the chaotic aftermath of the game. Though it was in its natural habitat, it, and the ballpark itself, could not have felt more out of place. In this new world, baseball existed only in story form, as a hushed reminder of a better life.

Those few who lived long enough to make baseball a memory spoke of a time in which this game was played daily by millions of boys and girls, men and women in a country called America. The game sounded fantastical to those lucky enough to learn about it. It was said to have represented the best of that life. It taught America’s citizens–another fantastical notion–important values and created peace. Instead of using fear and violence to establish order, people took out their aggression on the ball and base paths until they were able to civilly and rationally discuss their qualms.

To the storytellers and their audience, this way of life seemed like a dream. But as the 1930s became the 1940s, it turned into a nightmare. While British and French soldiers were fighting for freedom and justice on battlefields across Europe and Africa, American soldiers were fighting for base hits and the home run crown. Every time they received distress calls from their European allies and thought about joining the fight, they just couldn’t muster up the necessary aggression. These young men had spent so much of their youth killing pitchers with bats that they could neither mentally nor physically kill Nazis with guns.

Europe and Africa swiftly fell, and America stood as humanity’s last hope. But American soldiers could do nothing but play catch as first the Kriegsmarine lined America’s coast, then the soldiers patrolled American cities. As residents of aggressive, baseball-free Europe, no German agreed to a winner-take-all game, instead taking all while the Americans watched on, clinging to their gloves and bats. 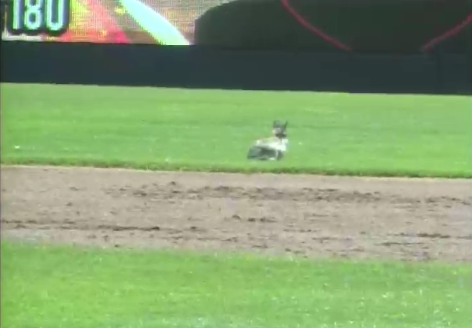 The other day there was a bunny rabbit delay in the Quad Cities River Bandits- Clinton LumberKings game. During the bunny’s adventure through Modern Woodmen park, play stops. One player approaches the small brown bunny, maybe with designs on… picking it up? Shooing it back to the dugout? Affixing a tiny hat to it and making it a team mascot?

The bunny is having none of it. It scurries towards the mound and faces off against the pitcher, who clearly wants nothing to do with the bunny. Maybe he had a bad experience in third grade with a class pet. The bunny can sense this. Animals know when they have the upper hand on you. Instead of retreating, the bunny boldly scampers past the pitcher, into the outfield, where it bounds around with all the route efficiency of Nori Aoki. In those moments, baseball time ceases to exist. All that anyone knows is bunny time.

There are a great many things to love about minor league baseball, but one of the best is that because the games are played outside, in small and often rural towns, we are very often gifted with these kinds of delays. Just last year, a game between the Batavia Muckdogs and the State College Spikes was delayed when a sheep found its way on the field. The sheep, unlike the bunny, takes a long meander through the outfield; imagine Mark Trumbo wearing a polar fleece, sauntering from corner to corner. When the grounds crew comes to collect the sheep, it puts up a fight, which you would too if you found a free, well-maintained, all-you-can-eat salad bar and someone tried to pry you away from it.

“Something tells me the sheep was as frightened as anyone,” says the announcer, but I respectfully disagree. The sheep saw that expanse of green, studded with a few inconsequential baseball players–like the lima beans you pick around–and it registered, with sheep-sense, that this was a place for sheep to feast. And the sheep was not wrong! The composition of an average baseball field is a 3% human construct, at best, in the form of chalk lines and bases. One bunny reduces it to zero, lifts the artificiality of the baseball field entirely., For sheep and bunnies and whatever other animals were there before us, and they will be there after us.

The Many Births of Joe Zapustas 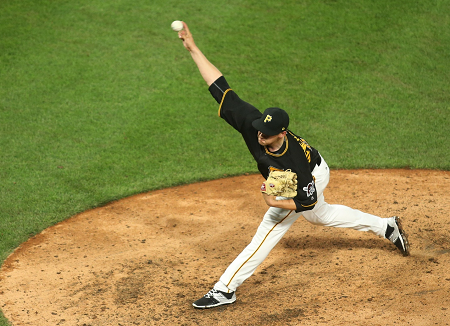 Yesterday afternoon, the Pirates called up reliever Dovydas Neverauskas. A few hours later, he made his major-league debut by pitching the last two innings of a blowout loss. In between, MLB.com published an article noting that Neverauskas is the first born-and-raised Lithuanian to play major league baseball—with the latter part of the born-and-raised qualifier being important, as the piece claims that Joe Zapustas was born in Lithuania but grew up in Boston before getting his cup of coffee with the 1933 Philadelphia Athletics.

There does not seem to be any disagreement over the fact that he was born on July 25, 1907.

This is how it is; baseball is an intricate palace built on sand. We know that Neverauskas learned baseball from his father, a champion javelin thrower who was part of Lithuania's first team in the 1980s as the Soviet government invested in growing the sport's popularity before its inclusion in the Olympics. We know what his weight is, his blood type, exactly how many times his fastball rotates over sixty feet. We know everything except what to compare him to.

You need to be logged in to comment. Login or Subscribe
Chiefsnark
The animal thing sometimes happens at major league parks. A couple of years ago at a Tiger home game a squirrel got onto the field and halted play for a few minutes. The grounds crew was unable to catch it and eventually the umpires just had the game continue.

I would guess this is the first time the ruling on the field was, "The squirrel is in play."
Reply to Chiefsnark
BrewersTT
A squirrel, possibly a different one, cost the Phillies a 2011 NLDS and probably also the Brewers the 2011 NLCS, as any coldly rational examination of the facts will show.
Reply to BrewersTT
scylla
Just FYI, it's the Quad Cities River Bandits, not Quad Cities Rivercats.
Reply to scylla
ryanthomas
What is this
Reply to ryanthomas