I realize, given the Nationals’ lack of October success, that using a “Mr. April” moniker in relation to Bryce Harper may be viewed as criticism of some sort. That’s not my intention. Harper has hit four career playoff home runs—tied with Miguel Cabrera, Jimmie Foxx, Johnny Bench, Chipper Jones, and Jose Canseco for the 10th-most ever through age 24—and I have no doubt that he’ll put up plenty of big playoff numbers in the future. For now, though, his opening-month numbers are the ones worth drooling over, because few players in baseball history have ever hit like Harper in April.

This will be Harper’s third season in five tries posting an OPS above 1.100 in April while starting at least 20 games. During that same five-season span every other player in baseball has accomplished that five times, combined, and no one except Harper has done it more than once. When it comes to contemporary April performances, Harper is on a totally different level. Baseball Reference’s indispensable Play Index shows that there are 211 active players with at least 300 career plate appearances in April. None of them come within 100 OPS points of Harper’s career .319/.428/.636 opening-month line. 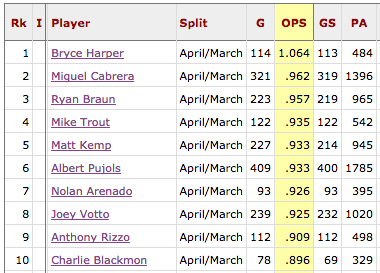 The difference in OPS between Harper and the 10th-best April hitter, Charlie Blackmon, is the same 168 points as the difference between Blackmon and the 132nd-best April hitter, Justin Smoak. Comparing his April numbers only to active players is certainly eye-opening, but it also probably short-changes how he’s dominated in the opening months. There are 1,734 players in big-league history with at least 300 career plate appearances in April and Harper has a higher OPS than everyone except Babe Ruth, Ted Williams, and Barry Bonds. 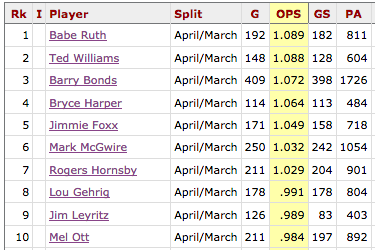 Three things about that list stand out to me. First and foremost is the fact that any list with Ruth, Williams, and Bonds in the first three spots is a good one. Second is Harper’s placement directly behind them in the fourth spot, which got me started down this rabbit hole in the first place. Last but not least is the presence of Jim Leyritz alongside nine of the biggest names and best hitters of all time. And the funny thing is that Leyritz is best known for his October performances, which included hitting eight postseason home runs in 72 at-bats for the Yankees and Padres.

Bryce Harper: Ruth/Williams/Bonds-like in April, very good from May to September, and a top-10 active hitter overall. My assumption is that Harper’s month-by-month splits will mostly even out over the course of what figures to be a two-decade career. For now, one possible theory for why his April numbers are so much better than his other months is that he’s often gotten banged up physically as the season wears on, at times playing at what was clearly less than 100 percent. Maybe he starts off on fire every April because he’s actually healthy.

Harper’s opening month isn’t over yet and his next three games are at stat-padding Coors Field, so I was curious about what he would need to do this week to finish with one of the best Aprils of all time. And as so often happens when you go looking for “the best of all time” in any hitting category, it basically turns into a Barry Bonds appreciation. Keeping in mind that Harper could theoretically struggle for the next six games and drag his April numbers down, here are the highest OPS totals in any April among players with at least 75 plate appearances. 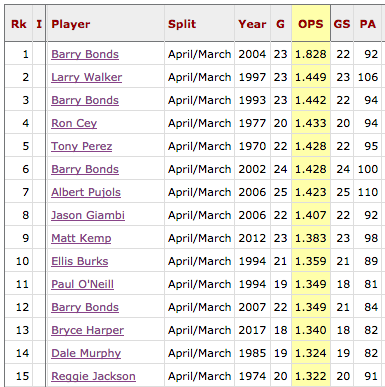 Harper currently has the 14th-best OPS for a single April (it says 13th, but Thames leap-frogged him last night). With a strong final week, he could easily move into the top 10 and possibly even rise as high as second. He will not, however, be rising to the top of the list, because Bonds has placed that particular record out of reach for mere mortals. Bonds hit .472/.696/1.132 in April of 2004, slugging 1.132(!) with 10 homers in 53 at-bats and drawing 39 walks in 23 games, all while striking out six just times. He scored or drove in 43 runs while making 30 outs. Oh, and Bonds also holds three of the other spots on the all-time top 15.