April is National Poetry Month, and no sport has generated such a profusion of poetry—low verse and high, rhymed and free, comic and tragic—as baseball. The subject has been taken up by giants no less than Walt Whitman and William Carlos Williams, by Marianne Moore and Donald Hall and Gail Mazur, for the utility of baseball at metaphor is vast. A game steeped in nostalgia and tradition, predicated on failure, subject to the whims of chance and weather, and executed with both languor and spark cannot help but stir the writerly emotion, and on other days we may return to those literary gems.

But today we revisit some newspaper doggerel because it’s still April and April is no time to get serious about the season yet: Franklin Pierce Adams’s “Baseball’s Sad Lexicon.” Adams’s original verse paid homage to the early 20th century Chicago Cubs infield of Joe Tinker, Johnny Evers, and Frank Chance, and though it may have left the baseball world with a somewhat inflated opinion of the named players, the lines linger most not for their analytical merit but for their fine rhythms, memorable refrain, and easy adaptation.

Donell Nixon, You Have Forgotten Your Ring 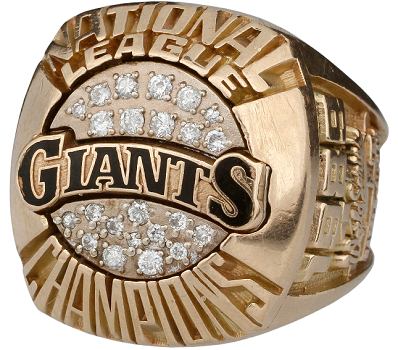 Donell Nixon, you have forgotten your ring.

Perhaps you grew tired of the weight of it on your hand. Perhaps it no longer fit, the mindless training of your professional days behind you, afternoons of beer and taquitos between. Perhaps it reminded you of narrow defeat, of dreams nearly realized: champagne untouched, given away with the corks still in, like communion bread after the service. Perhaps it reminded you that you were 21 at bats away from the end.

And yet: The gold is scratched, the lettering on the side worn. The ring looks lived in, the letters on the front scuffed by doorknobs and lawn mower handles, fistfights, bar counters, age. It looks like you wore it every day, only remembering when the glitter of the diamonds caught a stranger’s eye, forcing them to open their mouth to ask. Were you there. Was that you.

It was, in a way. A literal, metaphorical giant. Not the same you that stole 144 bases in Bakersfield, a number that would have been a record any year except the year you did it. Vince Coleman. 145. And then an outfield wall snapped your leg in two places, robbed you of your storyline. Instead you spent most of the climax of your own story offstage, on the bench, while the Donell Nixon you might have been, Rickey Henderson, held the trophy aloft.

Eighteen years ago you pawned this ring, signed the slip that was included in the auction like a minor bonus. It’s strange to think that it’s out there with your name on it, but not yours, just like it’s strange that people still have photographs of you in their attics. I don’t know how much you got for the ring, how you used it; I don’t want to know. I want to believe it was to start a restaurant, or maybe just buy bread, or maybe just to go back to being normal size. I hope it was one of those things. I hope you became the Donell Nixon you wanted to be, your name and your career someone else’s, your hands light.