I’m going to show you a lot of charts in this post. So if you don’t like charts, read one of the other articles on the site today. They’re good!

I’m going to start out by showing you a chart and ask you to guess what it is. The x axis is the years from 1920 to 2016. The y axis is a familiar baseball metric. It’s not something obscure like my article on Monday about multiple blown saves. Here it is:

OK, something that’s gone down sharply since 1920. Sacrifice bunts per team? Plate appearances ending with a ball in play? Games completed in less than three hours?

That makes sense. Complete games are a rare event now.

Starting pitchers who last at least eight innings, but fewer than nine, are in decline as well. Again, that makes sense. Starters are giving way earlier to a parade of hard-throwing relievers. Same downward slope as above.

But the chart shape is going to start changing … now.

Obviously, the increase in starters pitching at least seven but fewer than eight innings isn’t a reflection of contemporary pitchers throwing more innings. It’s that they’re pitching fewer. When nearly three-fifths of starters were staying in the game at least eight innings, there just weren’t a lot of shorter outings to go around. Seven is the new eight.

The chart for pitchers lasting at least six innings but fewer than seven is much more stark. That used to happen in about one out of every 12 starts. Now it’s pushing one in three. In contemporary baseball, starts of this length represent the plurality.

Same story with pitchers lasting at least five but fewer than six innings. A century ago, most starters lasted at least eight innings. Now, most last through five, six, or seven.

Even starts of at least four innings but fewer than five are up. Starters are going shorter and shorter.

The trend seems to be slowing here, though. The percentage of starters who throw at least three innings but fewer than four have held more or less steady through the years.

At this point, I should make an apology to chart aficionados. I keep changing the y axis scale. I think the reason should be clear: If I’d kept the 0 percent to 50 percent range from the first chart, you wouldn’t be able to discern much of anything here. And I’m going to continue playing with the scale, so you can see what’s going on. 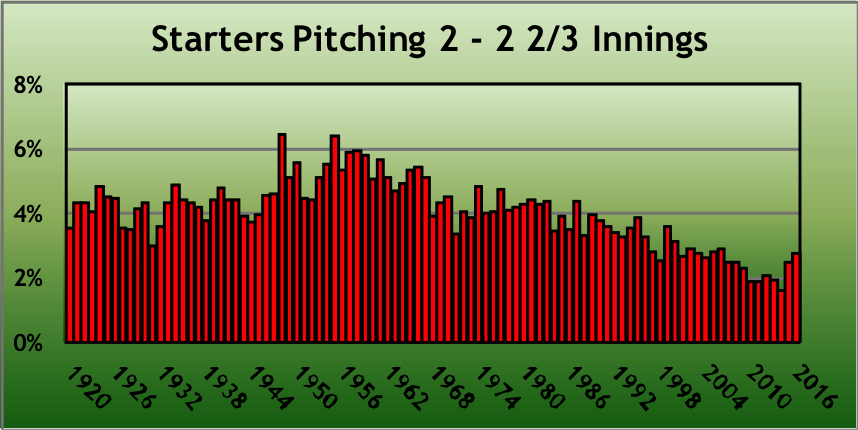 Hmm. That’s a mostly downward trend. Starters are less likely to last at least two and fewer than three innings than they were through the 1960s. 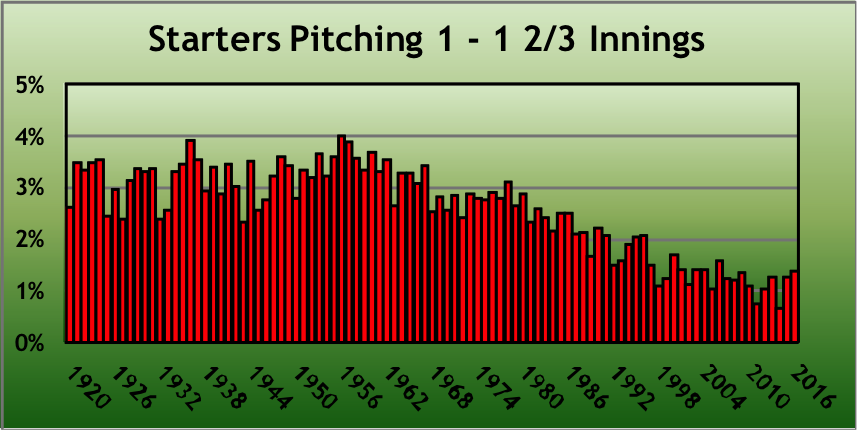 If you ignore the scale of this graph and just look at the shape, it looks a lot like the earlier graph of pitchers who lasted at least eight but fewer than nine innings. A starter pitching at least one inning but fewer than two has become much less common. 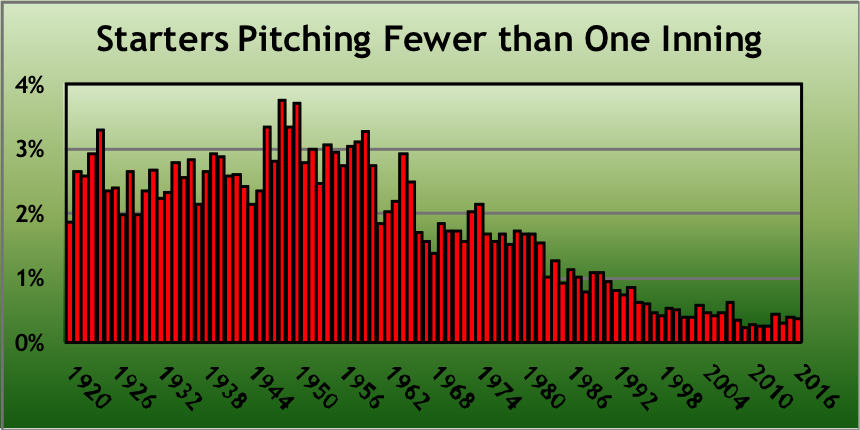 And this is like the nine-plus innings graph—almost never happens anymore. Granted, it’s falling from a much lower level, but it’s fallen nonetheless.

Let me summarize for you, then I’ll knock it off with all the graphs.

Through the end of World War II, most starting pitchers lasted at least eight innings. That proportion’s been 10 percent or lower for 11 straight years, culminating with an all-time low of 5.5 percent last season. Long outings have become rare.

The easiest answer would be that there aren’t as many horrible outings that force the manager to hand over six or more innings to the bullpen. Take the high-water mark for pitchers lasting three or fewer innings, 1948, when nearly 14 percent of starts were like that. Here are the cumulative statistics for starters pulled before the third innings, both raw statistics and the percentage of league average, in 1948: 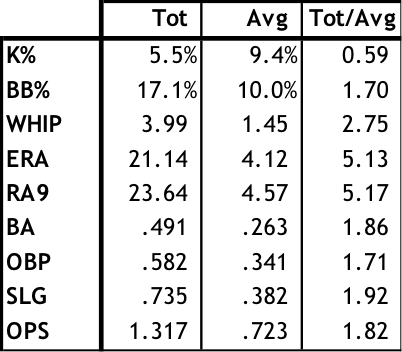 The proportion of starts that ended before three innings in 2014 was 2.6 percent, the lowest in this analysis, less than a fifth of 1948’s rate. Let’s see whether this is, in fact, because they’re not as awful as they used to be. This is a little bit of an everybody-who’s-not-here-raise-your-hand problem, since we don’t know about the pitchers who pitched poorly in the early innings but didn’t get pulled. But if the threshold of awfulness hasn’t changed, and fewer pitchers are getting pulled now, it follows that there are fewer pitchers reaching the threshold.

Here are the numbers: 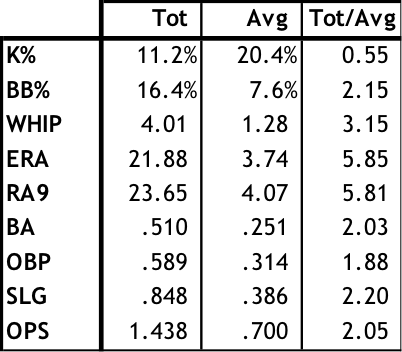 Again, why? Why are managers today so much more reluctant to pull struggling pitchers early?

OK, I lied. One more graph, which answers the question: 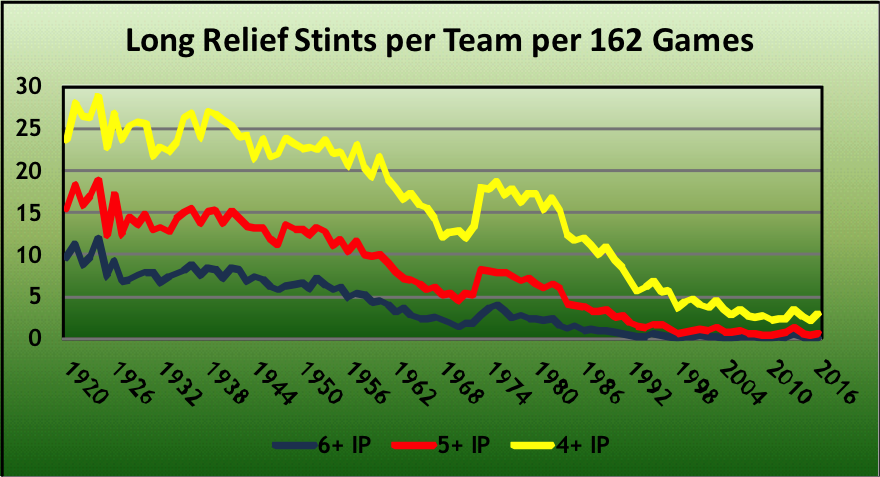 It’s not just starters who don’t go long anymore. Relievers don’t either. With the average relief appearance hovering around one inning, it’s really hard for a team to cobble together enough relievers to replace a pitcher in the first few innings. In 1924, the average team, playing a 154-game season, had 11 relief appearances of six or more innings. The last time there were that many in total in the majors was 1996 (when there were 75 percent more teams and five percent more games per team). There have been similar dropoffs, as you can see, in relief appearances lasting five or more and four or more innings.

So why are fewer pitchers getting pulled early? Because there’s no replacement for them. As counterintuitive as it sounds, a starter having a bad day has to wear it for the club rather than tax the seven- or eight-man bullpen.

Part of that is run environment, but mostly it’s bullpens. In modern baseball, there’s nobody for mop-up duty. Struggling starters have to keep on struggling.

You need to be logged in to comment. Login or Subscribe
leites
Interesting, thanks for doing this!
Reply to leites
mainsr
Thank you! I'm glad you enjoyed it. This is something I noticed last summer when I wrote a piece about the 1971 season. I noticed that there were a lot more super-short outings then than there are now.
Reply to mainsr
ddietz2004
Joe Sheehan has written about how swing man pitchers are no longer a thing. Teams just do not have guys in the bullpen that managers can go to when their starters struggle, so managers cannot have the quick hook anymore because of the reasons you detailed.
Reply to ddietz2004
mainsr
Yes, Joe's absolutely right. His excellent newsletter a while back discussed how it's both hard and dangerous to stretch out a one-inning reliever to pitch four or five innings.
Reply to mainsr
ajbeisheim
I would much rather see all of these graphs with the same y-axis. It's so much more difficult to compare graphs when they aren't showing the same thing, but I understand the point you were going for. Interesting findings!
Reply to ajbeisheim
mainsr
Re the graphs, understood, but as I pointed out, if I'd kept the scale the same for all the graphs, only the first five so would be at all discernible.
Reply to mainsr
newsense
Can we be so sure about the direction of causality? Do starters stay in because there are no long relievers or are there no long relievers because there's little value to replacing the starter once the team is so far behind?
Reply to newsense
mainsr
Sure, we can't be sure. But take this example: In 1955, there were 4.25 runs per team per game. In 2015, there were 4.25 runs per team per game. So the run environment was exactly equal.

The evidence for me is that in 2015, managers allowed a the starters to go deeper into the game, allowing a full extra run per game--one that moved the team into negative territory relative to the average runs per game--before pulling the starter.

So sure, the teams in 2015 were farther behind. But why did the manager *let* them get that far back in the first place? That to me speaks of a lack of options.
Reply to mainsr
mhmckay
This brings home to me something I have been living in my OOTP Baseball simulations -- my starter sucks today, should I take him out? no -- you've already lost this game, so use up 80-90 pitches and then start drawing down your relievers, there's no difference between losing 8-3 and 12-3.
Reply to mhmckay
mainsr
Right, and you and newsense raise a good point, but I wonder when (or if) managers decided changed from believing a four-run deficit in the early innings is salvageable--hence the early hooks in 1955--to figuring they'd just let the starter hang out there and absorb more runs, as they do today.
Reply to mainsr
jfranco77
I think the early hooks in the "old days" also had a lot to do with shorter/less structured rotations. Sure, Lefty Grove didn't have it today, but let's get him out after 30 pitches and he can pitch 2 days from now.

Whereas today, Tanaka isn't starting for 5 days no matter what you do, so you might as well use up those 90 pitches.
Reply to jfranco77
mainsr
True, but the starters lasted eight or more innings in at least 30% of starts every year through 1980. Rotations were set in stone well before then.

But that's a really good point about earlier years. I hadn't realized this, but I checked for 1954 (the last time 42% of starts were eight or more innings), and of the 81 pitchers who started at least 15 games, only five (6%) made no relief appearances. Last year, of the 145 who made at least 15 starts, 102 (70%) didn't relieve.
Reply to mainsr
newsense
A lack of options or a conscious decision not to throw good money after bad?
Reply to newsense
mainsr
Well, returning to the 1955 vs. 2015 example (exact same run environment) - why are managers today letting the starter face two more batters and give up an extra run compared to 1955? If it's an unwillingness to throw good money after bad, managers today are saying "this is hopeless" when the starter's allowed four--the average RA for starters with <3 IP in 1955--and allowing a fifth run to score. That could be the case, but I'm more inclined to believe they don't have a choice.
Reply to mainsr