No major-league pitcher has pulled off a no-hitter since Jake Arrieta’s no-no against the Reds last April, but that didn’t stop Tyler Chatwood and Dan Straily from putting forth some creative no-hit attempts this weekend.

Chatwood carried a perfect game through 5 2/3 frames against the Giants on Saturday, eliminating 17 consecutive batters with just 58 pitches and one strikeout before Chris Marrero singled on a 3-2 count to break up the perfecto.

A stellar effort from the Rockies’ defense backed Chatwood’s performance, highlighted by Stephen Cardullo’s tumbling catch on the bullpen mound and an impressive barehanded scoop from Nolan Arenado.

The Giants had a rough go of it, not only finding themselves scoreless but losing left fielder Jarrett Parker to a broken clavicle on a collision with the outfield fence. Chatwood finished the afternoon with a shutout, keeping the Giants to just one walk and two hits in the Rockies’ 5-0 win.

Over 2,500 miles away at Marlins Park, the Marlins came within five outs of their first combined no-hitter in franchise history. Right-hander Dan Straily took the mound against the Mets on Sunday, pitching through 5 1/3 innings with five strikeouts and five walks.

As might have been expected, the walks spelled the end of Straily’s outing against the Mets. He was careful to parse them out over the first three innings, but got into trouble in the sixth inning after issuing back-to-back walks to Neil Walker and Yoenis Cespedes and putting a runner in scoring position. Miami manager Don Mattingly had no qualms about removing the starter from his 92-pitch no-hit bid, and subbed in left-handed prospect Jarlin Garcia to finish the sixth inning.

Garcia carried the combined no-hitter through the end of the sixth and passed the baton to right-hander Kyle Barraclough, who sailed through the seventh without incident. With six outs remaining and a two-run lead to preserve, right-hander Brad Ziegler relieved Barraclough in the eighth inning. Michael Conforto grounded into an easy out, Curtis Granderson went down swinging after a 10-pitch battle, and then things began to go haywire. Neil Walker, the same patient infielder who had given Straily trouble in the fifth, singled to break up the combined no-no.

The Mets returned in the ninth inning to torment Miami reliever David Phelps, who allowed a two-run double to Asdrubal Cabrera and knotted the game 2-2. In the end, however, the drama of the spoiled no-hitter and Straily’s erratic shutout was forgotten in a single, triumphant moment: J.T. Riddle’s first major-league walk-off home run.

SunTrust Park made its regular season debut on Friday, and the Braves’ Ender Inciarte was determined to put his mark on it. He netted the first out in SunTrust history, snagging a first-pitch fly ball from Manuel Margot. In the bottom of the inning, he recorded the first hit in SunTrust Park with a 1-2 single off Padres right-hander Jhoulys Chacin, then came home to score the first run on Nick Markakis’ two-run double.

The Braves continued to dominate in their home opener, driving in another run on Julio Teheran’s RBI single to offset the Padres’ two-run effort, but Inciarte wasn’t done scrawling his name in the history books. He returned in the sixth inning, driving a Craig Stammen fastball over the right-field wall for SunTrust’s first home run:

By the end of the night, the Braves had compiled a three-run lead and sent out Jim Johnson to finish off the ninth inning. Inciarte wasn’t content to rest then, either, and snared Luis Sardinas’ first-pitch line drive for the first final out in the Braves’ new home.

Behold the strike zone plot only Carlos Martinez and Jackson Pollock could have devised: 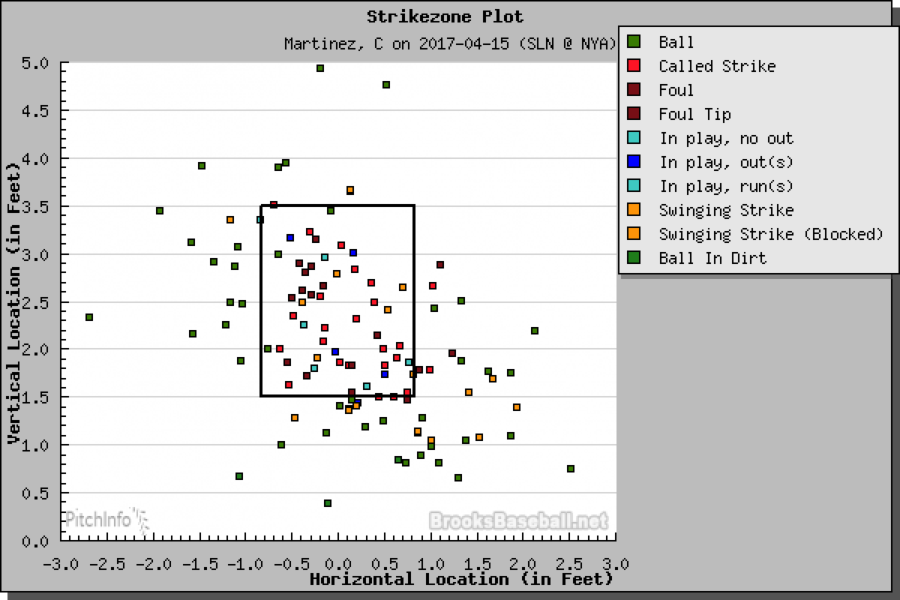 It was a peculiar day for Carlos Martinez, whose latest start yielded 11 strikeouts and a career-high eight walks during the Cardinals’ 3-2 loss to the Yankees on Saturday. The right-hander channeled the dual spirit of Dr. Jekyll and Mr. Hyde, swinging wildly between pinpoint command of the strike zone and, sometimes as soon as the next at-bat, utter lack of control. He issued four walks in the first inning, interspersed with three strikeouts and a run-scoring wild pitch to Starlin Castro. No batter reached base via a hit until Jacoby Ellsbury’s leadoff single in the third inning, by which point the Yankees had accumulated six walks and struck out six times.

The third and fourth innings went smoothly for Martinez, who delivered another four strikeouts and held opposing batters to two hits and zero walks, but command issues cropped up again in the fifth, when the righty allowed a base hit and back-to-back walks to load the bases. He escaped the inning with a lineout, then got the hook after promptly giving up a pair of runs on a fielder’s choice and RBI single in the seventh.

Unsurprisingly, the Cardinals lost the game, unable to work back from a three-run deficit even after Jedd Gyorko and Stephen Piscotty clubbed a pair of home runs. Even more unsurprisingly, Martinez became just the second pitcher in franchise history to finish a start with 11 strikeouts and eight walks, tying the record Bill Hallahan established on two occasions in 1930.

Brian Dozier wants you to know two things: his knee feels fine, and he’s ready to improve on those career-best 42-homers from last season. And what better way to prove both points than by hitting the first inside-the-park home run of the year?

Despite taking some time off to rehab a sore knee on Saturday, the second baseman didn’t look any worse for wear during Sunday’s 3-1 loss to the White Sox. His line drive ricocheted off the glove of center fielder Jacob May, giving Dozier just enough time to book it around the bases and beat the tag at home plate.

Luckily for Stephen Cardullo, he’ll never know what it’s like to navigate an outfield catch on Tal’s Hill.

Everyone my age face plants. It's the coolest!

YES. You ain't cool, unless you face plant: https://t.co/2qLAC6fzhz pic.twitter.com/PCtnbv4FKj

Monday’s Rays-Red Sox game falls into the last category, when the Red Sox finish off their seven-game homestand with knuckleballer Steven Wright against Rays southpaw Blake Snell. Snell is coming off two losses, the latest a two-run, three-walk affair against the Yankees last Wednesday. Wright fared even worse last week, allowing the Orioles to rack up eight runs and four homers in 1 1/3 innings. Neither pitcher has looked anything close to dominant so far this season and, for that matter, neither have their parent clubs. Still, someone has to emerge the victor today, and chances are, they’re going to have to find some creative ways of doing it (11:05 ET).

Elsewhere around the league, Pirates right-hander Ivan Nova takes on the Cardinals for the first time in his career (7:05 ET), Jacob Montgomery hopes to improve in his second major-league start with the Yankees (7:05 ET), and Mike Trout takes some swings against the Astros’ Charlie Morton, who’s hunting for his first win since last April (8:10 ET).

You need to be logged in to comment. Login or Subscribe
newsense
How did you miss Bryce Harper's two home runs (including a two out two-strike walk-off?
Reply to newsense