Something odd happened during the Giants-Diamondbacks season opener. No, not Madison Bumgarner hitting two home runs. And not the Giants losing a game they led entering the ninth inning, making Bruce Bochy think he’s living out Groundhog Day or something.

Rather, it’s something related to the scoring of the game. Here is the MLB.com box score for Giants pitchers in the game:

Let me make it a little more obvious:

In any game that doesn’t end in a tie, only one pitcher gets credited with a win. Only one gets a loss. Only one gets a save, if there’s one to be awarded. Multiple pitchers can get holds, of course, and that’s not uncommon. In this Angels-A’s game, three Oakland pitchers—Ryan Dull, Sean Doolittle, and Ryan Madson—got holds. But two blown saves? That means that a team had a lead, blew it, got the lead back, and blew it again. How common is that?

I ran into a problem when trying to answer this question: Blown saves are not an official statistic. So they’re sort of in the eye of the beholder. Baseball Prospectus, FanGraphs, Baseball-Reference, and MLB.com all agree that the Giants led the majors in blown saves (MLB.com has them tied with the Marlins), but none of them list the same team total. So when analyzing blown saves, you need to specify whose blown saves.

For this article, I used Baseball-Reference’s, because that allowed me to use the site’s Play Index to help identify games in which more than one pitcher got a blown save. As you may know, the save statistic was created by a sportswriter, Jerome Holtzman, in 1960, and formally adopted by MLB in 1969. So I’ll use the data starting that year. It coincides with a lowered mound, smaller strike zone, expansion, and divisional play, so it’s as good a starting point as any.

I downloaded every blown save and identified each game each year in which more than one pitcher for a team received a (Baseball-Reference) blown save. As you might expect, that number has bounced around. There were only two in 1972 (Braves in a 9-8 loss to the Cubs on July 14, Cubs in a 6-5 loss to the Padres on August 21). The high was 39 in 2006 (don’t worry, I won’t list them). To put them all on equal footing, accounting for expansion and adjusting for strike-shortened seasons, I calculated the average number of multiple-blown-save games per team per 162 games.

Here are the results, with a handy trendline included: 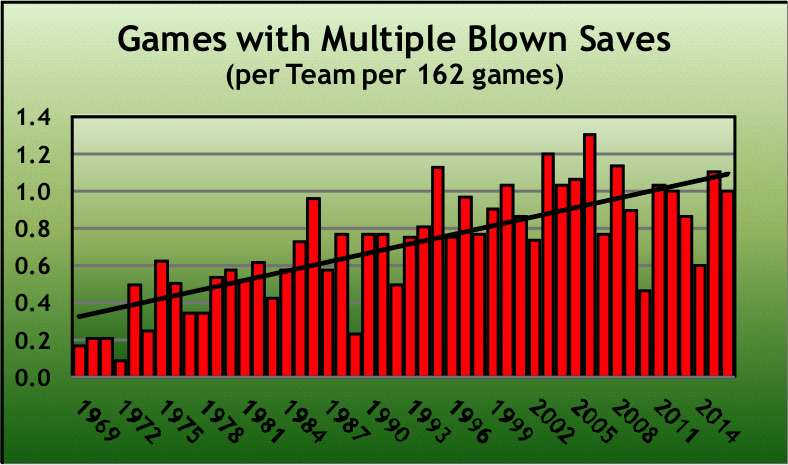 The general direction upward, while noisy, shouldn’t be a surprise. In 1972, when there were just two games with two blown saves, teams used an average of 1.45 relievers per game. In 2016, they used 3.15. When you’re bringing in more than twice as many relievers, it creates more opportunities for relievers to earn blown saves. To illustrate that, here’s the same chart as the one above, but instead of a trendline, I’ve added a line representing the number of relievers per team per game. The scale for that is on the axis to the right. 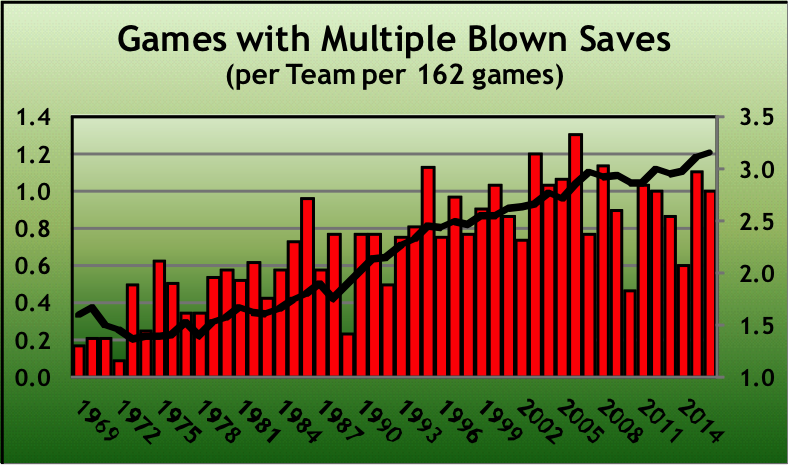 See? That’s a pretty close relationship. The correlation coefficient between games with multiple blown saves and relievers per game is 0.74. The increase in multiple-blown-save games is a consequence of more relievers entering games.

None of this is particularly earth-shattering. After all, we’re talking about a pretty rare event. In 2006, only about one in 62 games had pitchers for one team or the other getting more than one blown save, and that’s the high-water mark. I think I’ve said all I can about the trends. So let’s talk about the trivia!

Most multiple-blown-save games in a season. “Alex, who are the 2016 San Francisco Giants?”

Nope, Bay Area, you’re wrong. They did have three such games last year, and they led the majors in blown saves, but they weren’t record-setters. There have been 10 teams that have had four games with multiple blown saves in a season, most recently the 2011 Rockies and Nationals, and they’re not record-holders either. The record is five, held by two teams:

Most blown saves in a game. Two blown saves sounds like a lot. Has any team ever had three? It turns out that’s not so uncommon; it’s happened 25 times, most recently on May 12, 2015, when the eventual World Champion Royals blew three saves in a game against the Rangers that they nonetheless won. But four? That actually happened once.

On September 28, 1995, in the waning days of the strike-shortened season, the 74-66 Astros were in Chicago to play the 71-69 Cubs. They were far behind Cincinnati in the National League Central, but the Astros were only one game behind the Rockies for the first-ever Wild Card position. The Astros were trailing 5-2 after three innings but tied the game in the fifth and picked up a run to go ahead 6-5 in the top of the sixth.

Manager Terry Collins brought on Jim Dougherty for the sixth, but lifted him with two outs and runners on first and third. Dean Hartgraves allowed a run-scoring single, tying the game at six. First blown save.

The Astros went ahead 7-6 in the top of the seventh. Jeff Tabaka started the last of the seventh and left with one out and runners on first and second. Craig McMurtry came on and allowed a wild pitch, a walk, and a sacrifice fly, tying the game at seven. Second blown save.

Houston scored two runs on a James Mouton home run in the top of the eighth, going ahead 9-7. In the bottom of the eighth, with Greg Swindell on the mound, the Cubs got a double, fly out, single, and double to score two runs and tie the game at nine. Third blown save.

Nobody scored in the ninth. In the 10th, Houston went ahead 10-9 but the Cubs tied it at 10 in the bottom of the inning. However, Astros pitcher Dave Veres wasn’t charged with a blown save, because he’d entered the game in the eighth inning and was the pitcher of record when Houston went ahead. It wasn’t a save situation. Mike Brumley led off the top of the 11th with a home run to left, putting Houston ahead 11-10. Todd Jones came on for the save. He didn’t get it. A single, passed ball, run-scoring single, sacrifice, and run-scoring single later, Jones had both a loss and Houston’s fourth blown save.

Houston went 2-1 the rest of the season and finished a game behind the Rockies in the Wild Card race, so any one of those four blown saves cost the team a shot at the postseason.

How’s 2017 shaping up? April admonitions and all, but so far, so crazy!

You need to be logged in to comment. Login or Subscribe
bhalpern
Now that we have holds we should have blown holds. It makes no sense to continue to assign blown saves to pitchers that have no realistic chance to get a save.
Reply to bhalpern
mainsr
I know, but the problem is that it'd require the official scorer to measure intent. I mean, you and I know that in the season opener there was no way Law was coming in for a two-inning save but I can imagine situations where it wouldn't be as clear. Might be part of the reason blown saves aren't an official stat...
Reply to mainsr
olatan
the real scoring fiasco that should be fixed is when a pitcher gets the win AFTER he blows the save, because his team scores runs in the bottom of the inning for him. Just like a starter can't get the win if he doesn't go five innings, a reliever should not get the win if he blew the save before his team rallies to score runs.
Reply to olatan
mainsr
Yeah, but who does get the win in that situation? This is why #killthewin is a thing.
Reply to mainsr
LlarryA
And the next question is whether there is any consistency to the teams that multiple blown saves are *against*. I notice that two of the ones so far this year were against Houston. Does that end up meaning anything, or is it just random?
Reply to LlarryA
mainsr
Ooh, good one, llarry! Let me do some work on that. I'll either reply here or you'll see it in a column soon!
Reply to mainsr
LlarryA
Cool. It seems to me that maybe there are teams that are better at staging comebacks. Most comeback stats are based off *successful* comebacks, where the trailing team wins, but doing it from Blown Saves will pick up games where the trailing team came back multiple times, and ones where they could tie (or even lead) and eventually lose.
Reply to LlarryA
olatan
as for who gets the win if we make the change that a pitcher with a blown save CAN'T get the win... why not leave it up to the official scorer to assign it to the most effective pitcher... that is what they do if a starter leaves with less than five innings and his team never gives up the lead. So there is already a precedent for the official scorer to make a judgment call.
Reply to olatan
mainsr
I agree that that'd be more logical, but I have two objections. First, if a pitcher comes in with a one-run lead and a runner on second with two outs, and the batter hits an easy grounder that the second baseman throws over the first baseman's head, the RP will get a BS, which doesn't seem as if it should exclude him from getting a win. Second, and more importantly, I am generally in favor of anything in scoring that debases wins.
Reply to mainsr