A 17th-round pick by the Rays in 2011, Taylor Motter made some 2,000 plate appearances in the minors before the majors came calling last year. By the time his summer stint in The Show was over, the 27-year-old had two small-time claims to fame. He was the only major-league alumnus of Coastal Carolina University when the Chanticleers made their College World Series run:

And he was the only position player in the majors who encroached upon his jersey’s nameplate with his hair:

Neither that flow nor the Chanticleer education on his resume was the sort of asset that would keep Motter gainfully employed. And while he showcased his versatility, appearing at seven different positions—pitcher included—during his 34-game tour with the Rays, he also batted just .188/.290/.300, with only five extra-base hits in 93 trips to the plate.

Months later, the Rays shipped Motter to the Mariners in a five-player trade that also brought Richie Shaffer to Seattle while taking Dalton Kelly, Andrew Kittredge, and Dylan Thompson to Tampa Bay. Motter won a major-league job with the Mariners out of spring training, and soon after that, he came into the possibility of significant early playing time when a hamstring strain sent Jean Segura to the disabled list.

In the two days since he took over at shortstop, Motter has clubbed four doubles and a home run, matching his major-league extra-bagger total from 2016 in one-sixth of the action. It’d be foolhardy to read too much into a two-day outburst, no doubt, but it’s also worth recognizing that Motter’s power display comes with a little Statcast street cred:

Taylor Motter is crushing… He has 4 batted balls 100 MPH+ in his last 2 games. pic.twitter.com/msLnVXYYAh

He introduced himself to the Astros' bullpen with doubles at 110.2 mph off Ken Giles, 106.1 mph off Will Harris, and 101.0 mph off Luke Gregerson. Then, Mike Fiers got acquainted on a 105.1 mph homer. And even some of Motter’s outs in the Mariners-Astros series—a 110.9 mph line drive off Michael Feliz and a 107.8 mph fielder’s choice against Charlie Morton—were stung.

Exit velocity, too, can be a fluke, particularly in tiny samples like this one. But there are plenty of big leaguers who’ve never struck a ball 110 mph, and it’s noteworthy that Motter, who’s listed at 6-foot-1 and 195 pounds, has that sort of thunder. The question is whether it’s here to stay.

Sustainable power has eluded Motter to this point in his professional career. His best effort in that department came two years ago in Triple-A Durham, where he slugged .471 over 558 plate appearances that featured 43 doubles and 14 home runs. Last year, those numbers dipped to .389, 17, and 13, respectively, in 387 tries, before Motter put himself back on the map with three doubles and three homers in 61 Cactus League at-bats this spring.

A hitter’s sudden improvement becomes more believable if we can tie it to a tangible adjustment. With Motter, we just might have something to justify a little faith.

This is Motter last year, hitting against Craig Kimbrel during his cup of coffee with the Rays:

Watch the movement of his hands. Just as Kimbrel begins his motion, Motter raises them and the bat off his shoulder, to ear-height, only to bring them back down with a bat tip that accompanies his knee-lift stride. The hand-raise is not illogical, in that it forces Motter to make a bigger move with his upper body that he can synchronize with his leg kick, but the whole load operation here isn’t particularly efficient when it comes to getting his hands ready for launch.

Similar stance, but without the pre-stride hand-lift. The result is a much shorter distance for the hands to travel between the start of the pitcher’s delivery and the point at which Motter must decide to trigger his swing.

Motter has toyed with his hand position before. Here he is in May of 2015, simply holding his hands high in his stance: 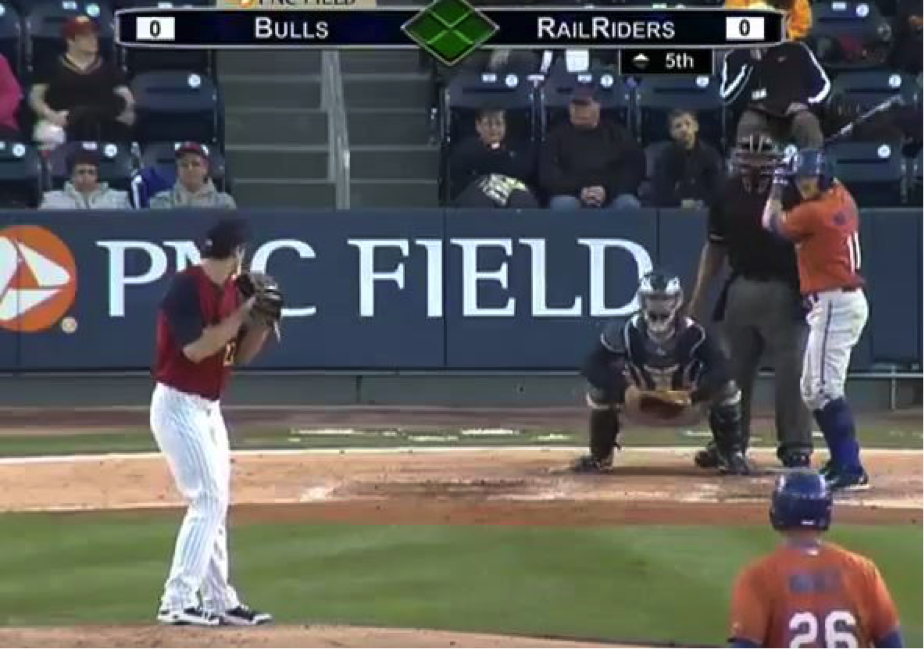 And this is him back in May of 2014, using a stance and load sequence that looks a little more like what he’s shown in Seattle thus far:

A hitter’s positions and movements before foot down are more style than substance, but that doesn’t mean they’re not important. In fact, they feed directly into rhythm and timing—the other kind of flow.

Which brings us back to Motter, whose power output has fluctuated nearly as much as the hand height in his stance and load. Smaller and simpler isn’t always better, but so far, eliminating some of his vertical hand movement appears to have done the 27-year-old a lot of good. It helped him to win a bench job out of spring training, and to open eyes with his triple-digit thump in the days that followed. With Segura sidelined for at least another week, Motter has an opportunity to leave a lasting impression. His versatility could earn him more even after the Mariners’ regular shortstop returns. It’s far too soon to credit the quieter hand load with unlocking Motter’s pop, but the early returns are at least a reason to stay tuned.

The flow on Motter’s head brought him his first taste of the big-league spotlight, and his newfound flow in the box might be just what he needs to keep it.